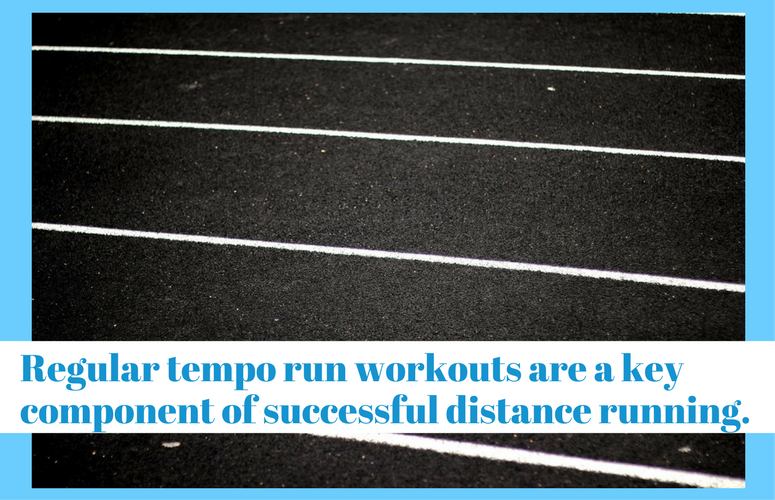 If there is one workout that should be in every runner’s training plan, whether for a 5k or a marathon, it’s the tempo run. It is the one workout, when done correctly, that is almost guaranteed to be beneficial and show results for every type of runner.

What is a tempo run?

When you are running, you begin to slow when lactate builds up in your blood faster than your body is able to clear it. (Sidetone: contrary to popular belief lactate itself does not cause fatigue, but it builds up in tandem with by-products that do.)

A tempo workout is done at the pace at which your body produces and clears lactate at a close-to-equal rate.  You are training your body to hold the fastest speed at which your blood lactate levels stay consistent.

It is a fine line. You want your tempo run to be done aerobically. If you start to feel that lactate burn in your muscles you are going to fast and have tipped over the line into anaerobic training.

Why do tempo runs?

By training your body to stay aerobic and clear lactate for a longer period of time, you are increasing your threshold, or the point at which the body fatigues at a certain pace.  The better trained you become, the higher you push your “threshold,” meaning your muscles become better at fighting off fatigue. The result is less-acidic muscles, so they keep on contracting, letting you run farther and faster.

The key is to find the right intensity for you.

Here are three ways you can dial in the correct tempo for you:

Tempo runs also go beyond the physical benefits. They are hard, stressful and fatiguing. On body and mind. By practicing being uncomfortable and on the edge, tempo runs can help you improve your mental endurance and prepare you for the emotional ups and downs of racing.

I’m currently training for an Olympic distance triathlon in June, about nine weeks away now. The Olympic distance event includes a 25-mile bike and a 10k run, so I’m using tempo and intervals to improve both my strength and speed.

After feeling blah on the bike yesterday afternoon, was very happy with how my legs felt this morning. Both segments were right on pace with the second (on a slight downhill) being quicker. No complaints there.

You can always find and follow me on Strava.

My workout above would be considered a classic tempo run. Warm-up, then run a set time or mileage at tempo, before cooling down. The tempo portion could be as short as 20 minutes or as long as an hour.

You can also do tempo intervals where you introduce a short rest period between tempo sets. For example you might run 2 x 3 miles at  tempo with a 90 – 120 second break between sets.

If you are looking for one workout that will help you improve as a runner it’s tempo training. It’s the best way to get faster and stronger, no matter your ability or your distance goal.

Tempo Runs will make you a faster 5K runner, a more powerful 10K runner, and a less fatigued marathoner. How? Tempo runs train your body and your mind to run faster for longer before fatiguing.