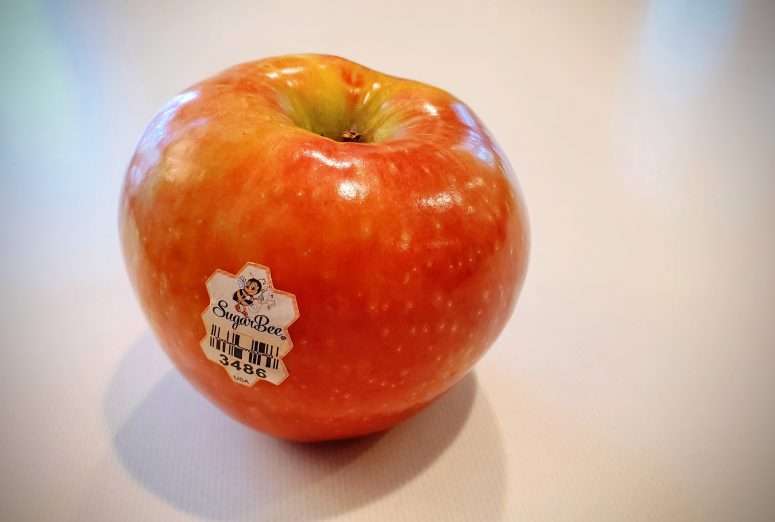 Fall is my favorite season and apples might be my favorite fruit. Like many people, I’ve come to really like the Honeycrisp. Slightly tart, mildly sweet, and very juicy, it was like a strange cross between a watermelon, a Macoun, and a Golden Delicious. When they are in season, I will drive miles out my way to search them out. While they dull in flavor through the winter, they still keep remarkably well and much better than other varieties.

The only downside? The price. They are by far the most expensive variety so I am always on the lookout for something that comes close to the taste but doesn’t dent my wallet quite so much. I’ve tried many varieties, often with cute, focus group names and never found one all that close. I gritted my teeth and paid the hefty freight on Honecrisps. An apple a day is a healthy habit but with Honeycrisps it was an expensive habit.

Still I haven’t given up hope and when I saw the SugarBee on sale this week at my local grocery store, I gave them a shot.

What is a SugarBee apple?

SugarBee is a cultivated apple, discovered in Minnesota in the early 1990s, it is now grown commercially in Washington state. It is a cross-pollination between a Honeycrisp and another unknown variety.

The Honeycrisp has exploded in popularity in the last five to ten years but has actually been around since the mid-1970s. It was patented in 1988 and first hit grocery stores in 1997. The patent is now lapsed in the US, but it has become big business and is now the third most grown apple in America.

It looks very similar to its parent and it tastes very similar, too. It does have more sugar so the taste is a notch or too sweeter. It retains the very crisp and firm bite of the Honeycrisp. It is crunchy and juicy. This will quench your thirst and satisfy your hunger.

The one big advantage that is being touted for the SugarBee over the Honeycrisp is shelf life. I haven’t tried it but they are supposed to retain their flavor longer.

Are SugarBee apples good for baking?

Yes. If you’ve used Honeycrisp in past pies, you can feel free to substitute the SugarBee. The SugarBee holds its shape well when cooked and should make a great choice for pies, strudels, or other hot dishes that involve baking or roasting.

Where can you find SugarBee apples?

They’ve only been available commercially since the end of 2018 and wide-availability still appears spotty at best. Chelan Fresh (the owners) say they are distributed through Wal Mart and Whole Foods but I have yet to find them there regularly in Massachusetts.

In summary, I was very happy I took a chance on SugarBees. This is the first variety that had me happily comparing it to a Honeycrisp and happy to pay the slightly lower price to feed my apple habit and my love of apple desserts.