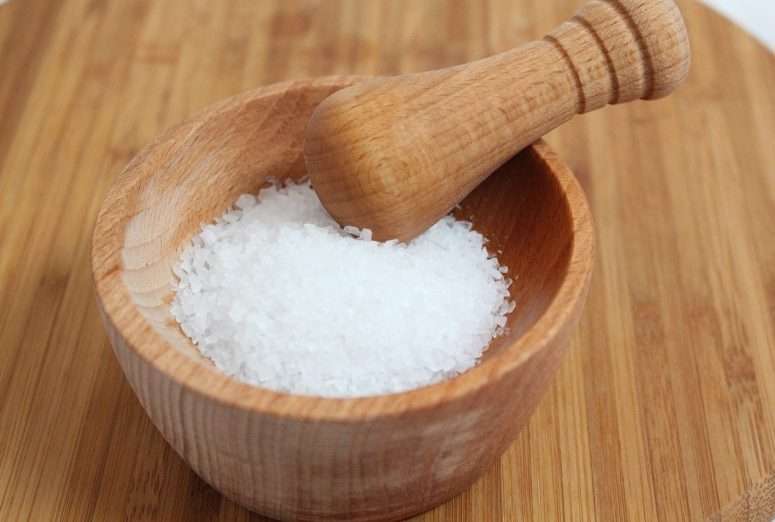 If you’re going to call one item in your pantry an essential ingredient than it should probably be salt. Salt is an important flavoring but also much, much more and likely used in just about every recipe you prepare.

Not only an essential cooking ingredient and taste modifier, sodium chloride is also an essential nutrient that we can’t survive without. Essential indeed!

But what is the difference between the most common types of salt: kosher, table, and sea salt? And how best are they used in the kitchen?

About half of all salt production in the world comes from the sea and about half comes from salt mines. The different crystal shapes come from the evaporation process. If the process is quick and fast, you get many small, uniform crystals, i.e., table salt. if the process is slower, you have the opportunity to get both flakes (from the top) and larger, coarser crystals that sink to the bottom of the drying vessel.

Table salt, or granulated salt, is what most people think of as salt. It comes in the form of small, regularly-sized crystals. It is the densest salt and often supplemented with additives to avoid it absorbing moisture or sticking together. It is often called for in baking recipes. Table salt’s fine texture is said to distribute more evenly in batters and doughs. Iodine is often added to table salt and has been since the 1920s to combat a dangerous health deficiency.

Kosher salt is named such because it is the salt used for the koshering process of meats in Jewish law. It is often sold in larger, coarse crystals. Kosher salt has no added iodine and if often called for in brines, pasta water, and big cuts of meat. One thing to note: brands vary in crystal size which can radically alter the salty flavoring in each tablespoon.

You might also like:  My 4 Favorite Home Bread Baking Books
Why is iodine added to salt?
Iodized salt includes trace amounts of potassium iodide, a mineral that’s key in the functioning of the thyroid gland. Iodine is readily found in fish and other crops near the coast but was once a dangerous health risk and deficiency in inland areas.

Sort of a misnomer as if you want to get pedantic, all salt is sea salt at some point. Refined and unrefined sea salt are harvested in beds and minimally processed. It’s a slow progressive evaporation of the sea water that can take up to five years. Unrefined sea salts (called gray salts in France) are not washed off their surface impurities. Refined salt is washed of their coating of topical minerals.

Translated as “flower of salt” it is a harvested product of sea-salt beds from west-central France. The crystals that form on the pans when the humidity and breezes are just right are gently raked off the surface. It’s typically more expensive than other salt due to the labor involved and added in the final stages to a dish and not as a cooking salt.

Decorative salt, like red or pink, is typically made by mixing sea salt with finely ground rocks and minerals like lava, clay, or coral.

All bodies need salt to survive and it’s a remarkable ingredient that has been indispensable throughout human history. Plus, it makes food taste good.