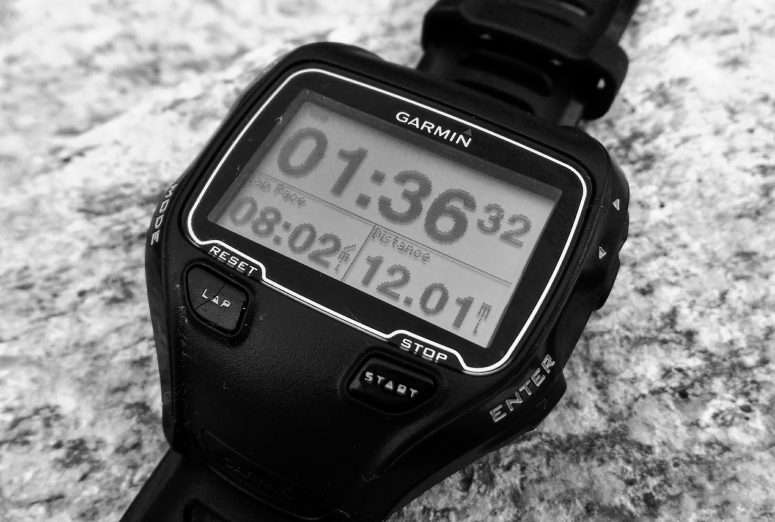 The (almost creepy) warm weather we’ve been having for most of this week looks set to end tomorrow, so I decided to flip-flop my long bike and run days so that I could enjoy the luxury of doing my long run in shirt sleeves and shorts in February. Too good a chance to pass up. Here’s how it went, plus the what the rest of Saturday looked like:

After a late night at a Beatles cover band concert to benefit Michelle’s work, the girls would have been quite happy to spend most of the morning on the couch, under a blanket, watching Full House re-runs. Dash was down with that plan. 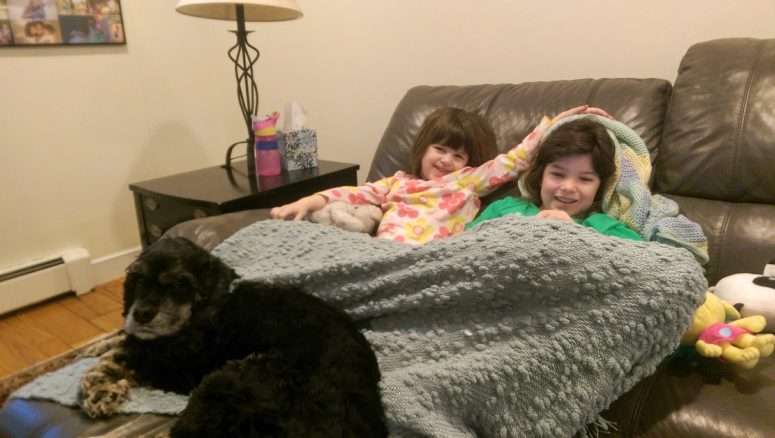 I however had that long run to do. At the moment, I’m in the middle of the training block for my Olympic triathlon in June which is a 10k run, so my long run day is more than the Oly plan typically calls for, but I like keeping at least a little of that distance fitness, so I try to do one double digit mileage day per week.

Today, I was hoping for 10-12 miles, but my right hamstring was a bit tight, maybe from the speed work on Thursday. And just to throw another variable in, I’d screwed up and missed one of my meds (even with all my alarms and reminders this tends to happen once every six months somehow), so I was still getting back in balance with all those levels.

In short, I didn’t know what to expect and was willing to pull the plug quick if my leg didn’t loosen or I felt a lot of adrenal fatigue. 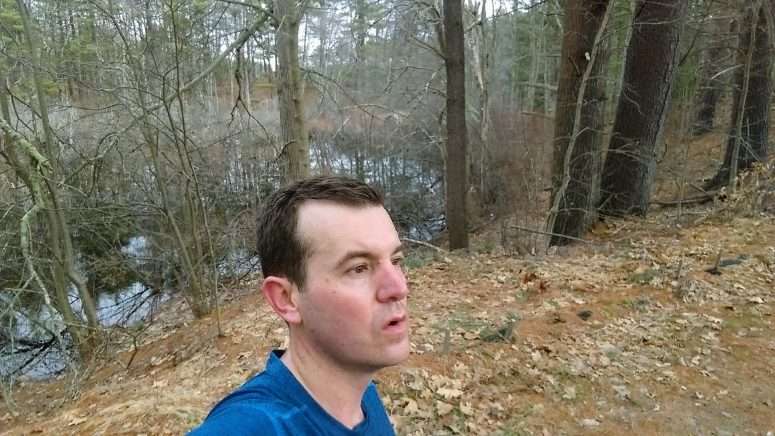 A sweaty selfie at mile 9. All the routes around the house were feeling very blah, so I drove into town, which had the benefit of some lesser run roads as well as the motivation to get some Blue Moon swag when I finished.

Without a specific training goal other than endurance, I wanted to work on patience pacing. I was really happy with the pacing for last week’s race where I really built up the pace rather than going out too fast. Also wanted to continue focusing on the mental aspects of the long run which I know will be key during the marathon later in the year. You can’t let your mind wander too far, especially when you are tired. Your form will get sloppy and when that  goes everything else soon follows.

I took the opening miles slow and the hamstring did eventually loosen up and after about 4 miles the legs dropped that heavy feeling and I felt good most of the rest of the way. The hips tightened up around the time of that selfie and is a good reminder I need to step up the core/hip work if I don’t want to be hobbled by the end of either of these races. 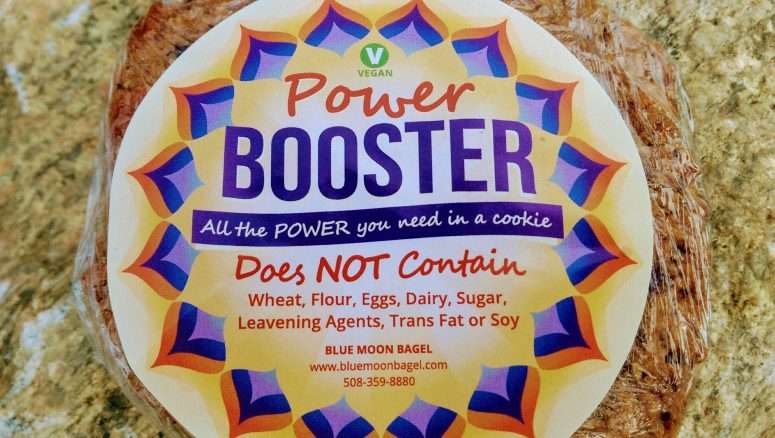 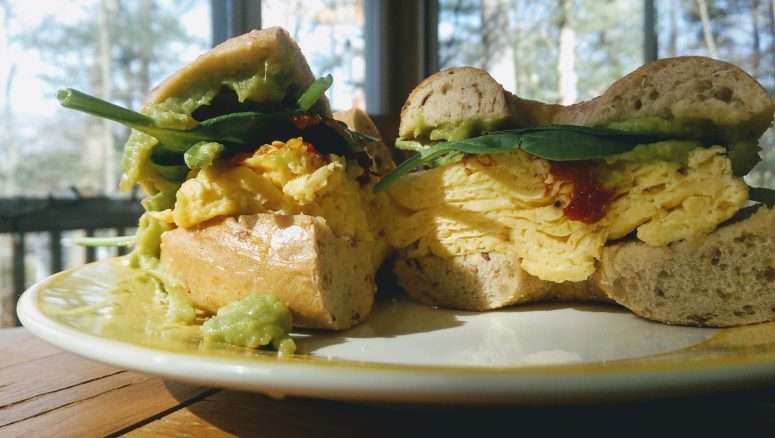 Blue Moon swag! Power Booster cookie which I’m mildly addicted to if I’m honest, plus an egg sandwich which I added spinach, guacamole and hot sauce to when I got home. 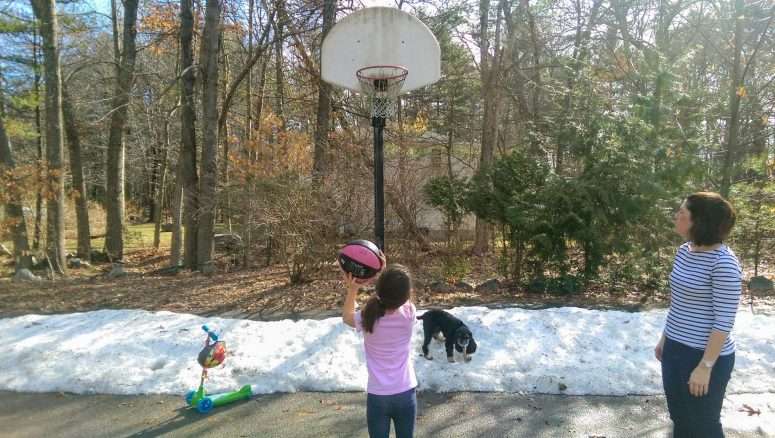 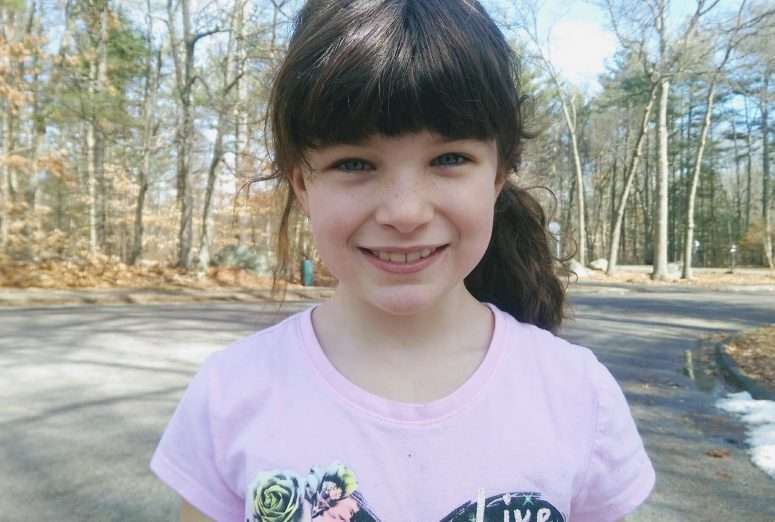 When I did get home to relieve Chelle of solo parenting, I was happy to see Cece out practicing her basketball. The last session/game is tomorrow and she’s improved a lot since we started (I was an assistant coach). 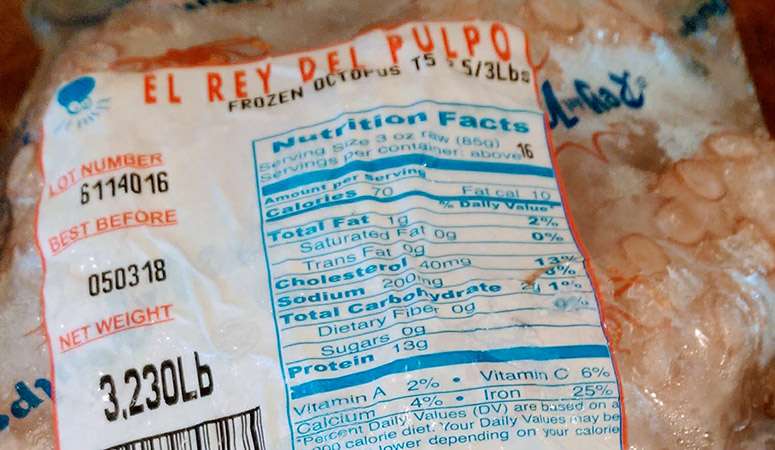 Yes, that’s a frozen octopus. Technically, it’s our practice octopus. It’s defrosting. We’re having our dominoes group over to our house next weekend and the theme is Mediterranean and we are cooking an octopus. It’s been awhile since I cooked one, so I wanted to practice. We’ll see.

I quickly showered and relieved Chelle. She was off to shop on her continuing quest to find a coffee table and end tables for the living room. Now that the contractors have finally finished, we are using Cecilia’s First Communion at the end of April as a deadline to get some home decorating projects done. 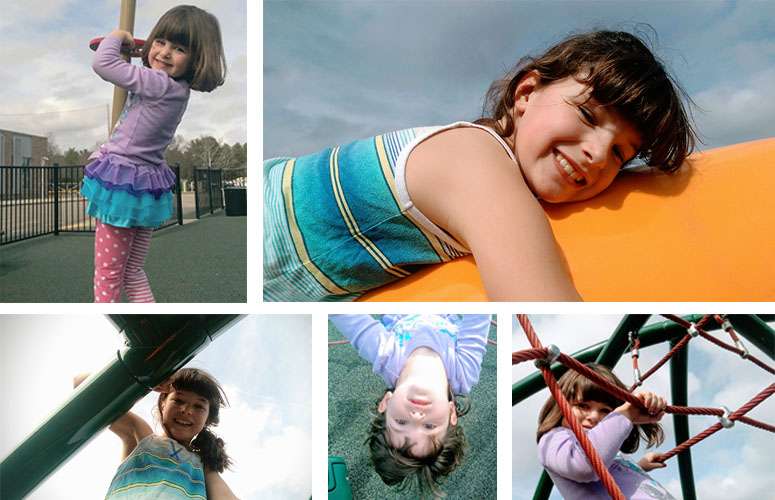 The girls and I would take advantage of the weather to hit up the playground. Should I be happy or sad that they no longer need me to help them out on every piece of equipment? 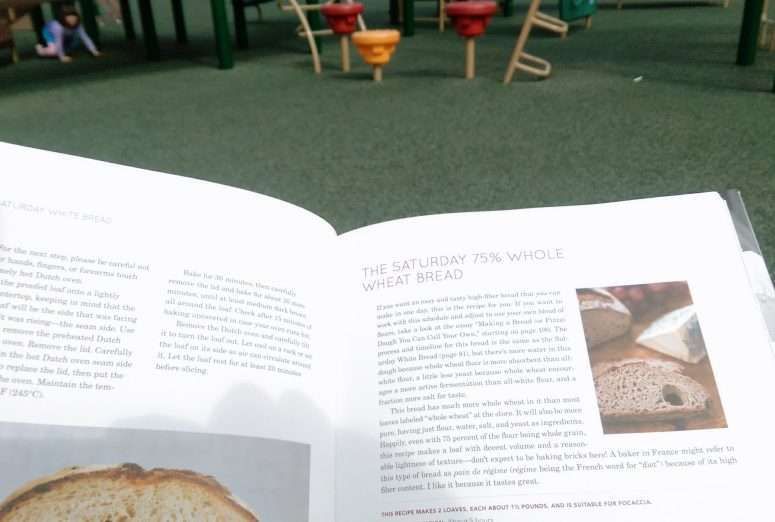 Trying to settle on a bread to make for tomorrow’s Sunday dinner. 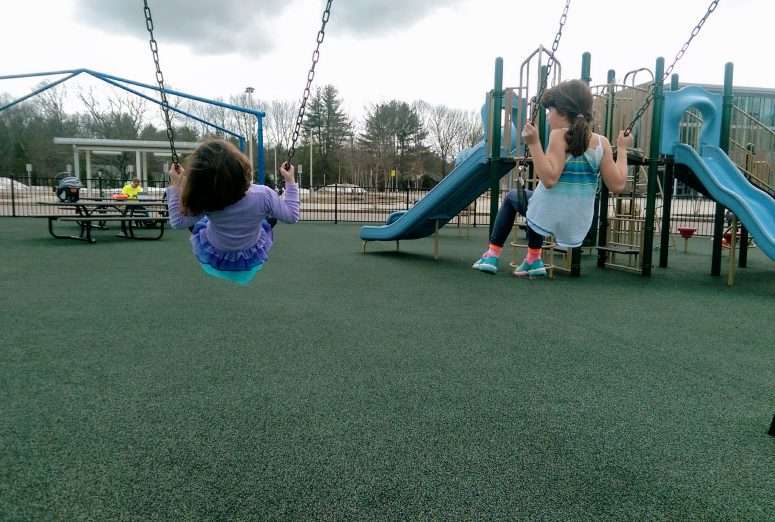 Ally still likes me to push her on the swings. 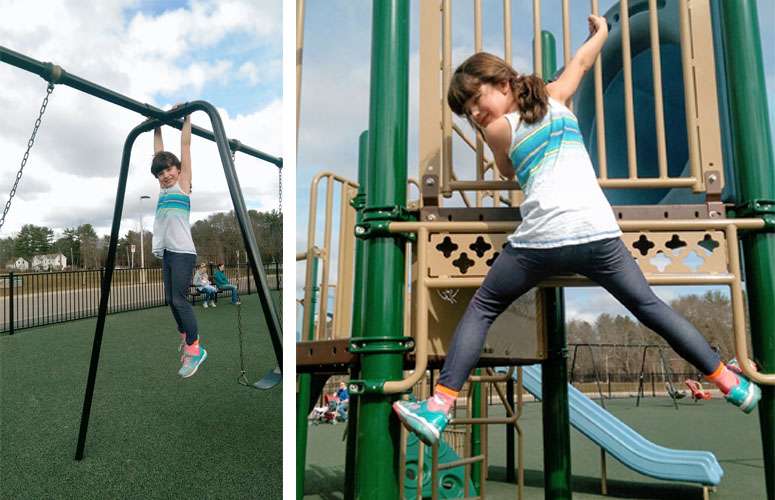 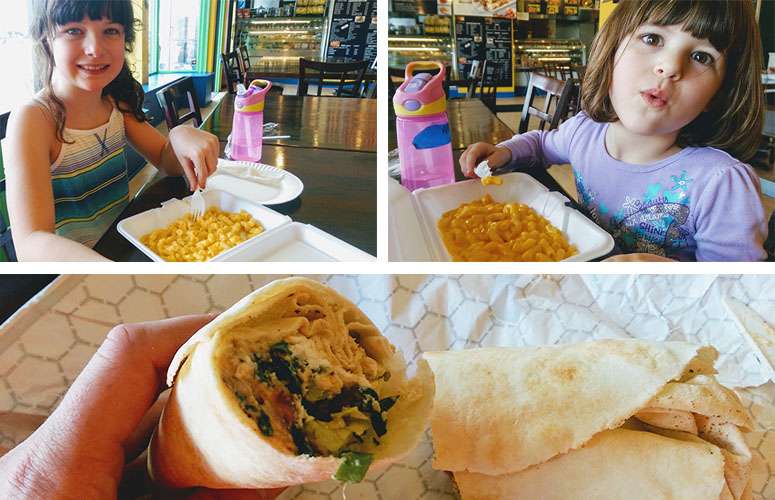 All that playground time certainly built up an appetite for lunch. Mac ‘n cheese for the girls (what else) and a hummus/feta wrap for Dad at Go Fresh. 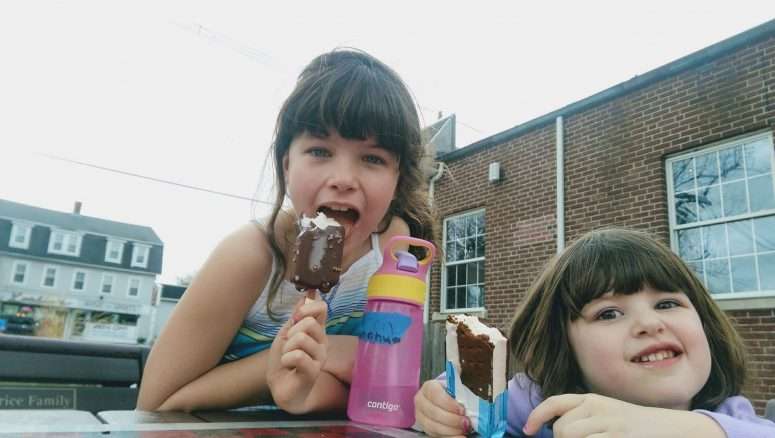 We were next door to the place that sells slushies in town. Only they don’t typically sell them in February. The way the guy answered, we were not the first to come in and ask. The settled for some ice cream treats. 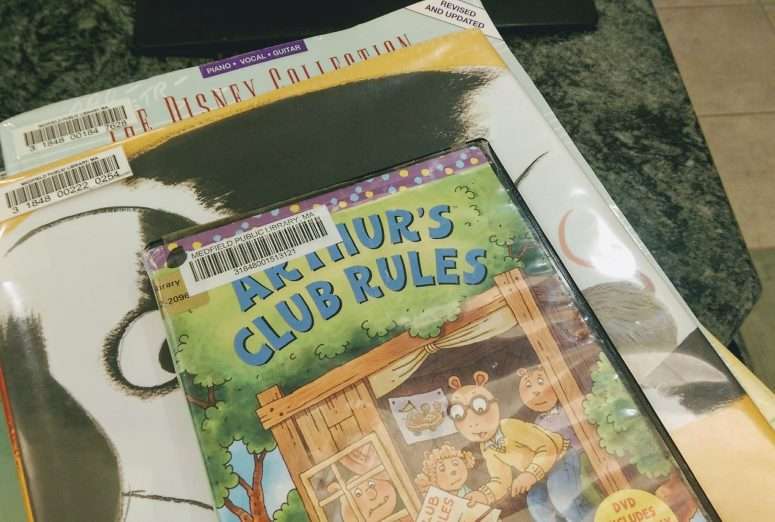 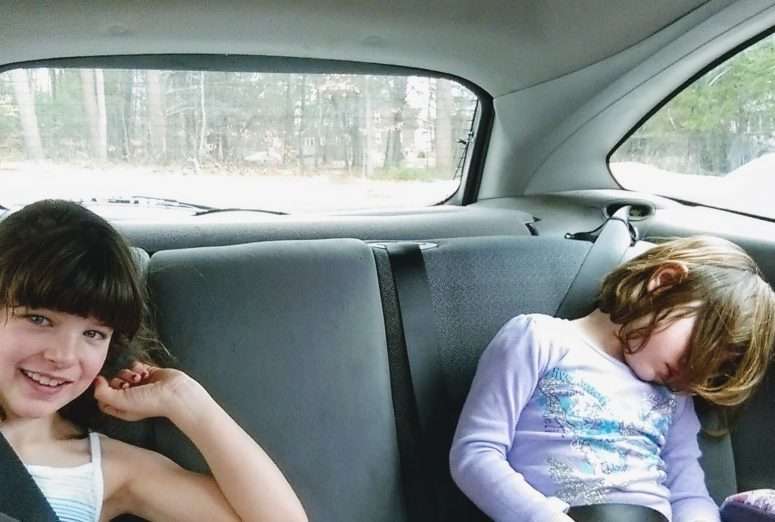 We grabbed some books and a video at the library on the way back to the car. At this point, the weather was getting a bit iffy. It was sprinkling, but showing big patches of blue sky. Should we go to the pool or try another playground. We tried the playground. Ally promptly fell asleep on the 5 minute drive. 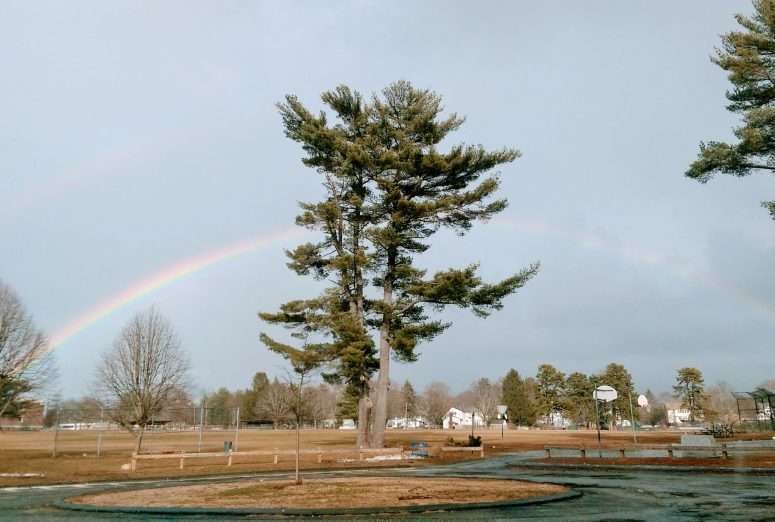 The playground didn’t last long before we got a decent shower and we bailed. They (and Dad) were fading away. But we didn’t go away empty handed. We got a nice good-bye rainbow. 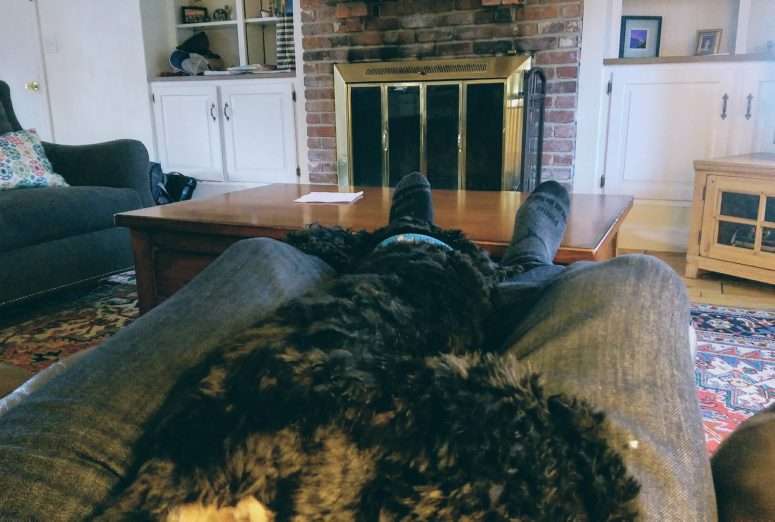 Dash and I got some QT while the girls had a quick bath to warm up. 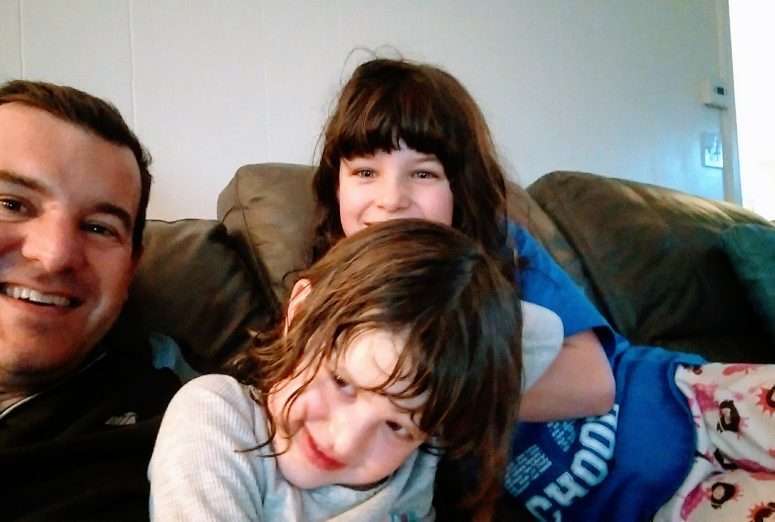 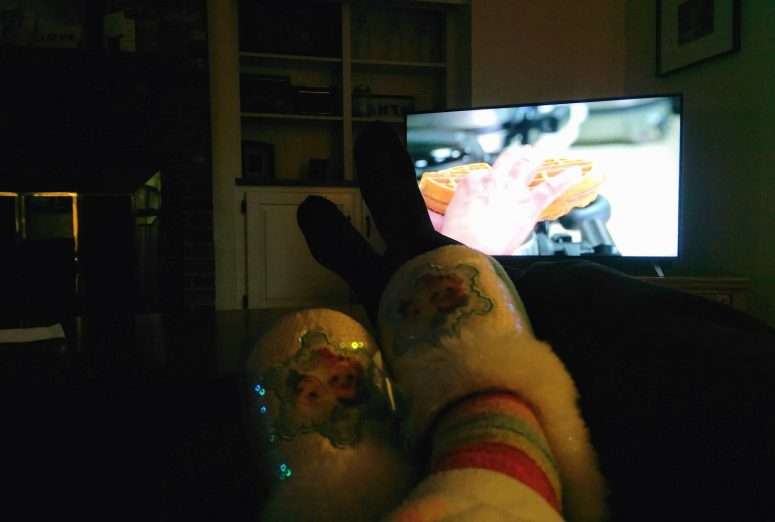 Then we all had some couch time to watch America’s Test Kitchen. Still getting used to the new dynamics, but this episode with the sticky buns, waffle iron testing and almond butter seemed tailor made for me. I will definitely try that sticky bun recipe. 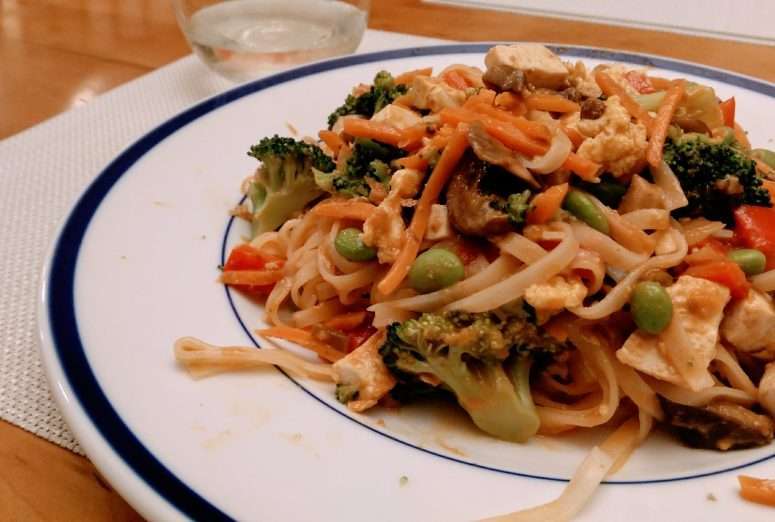 Weekend stir fry means we are just dumping the crisper drawer into a pan and calling it dinner. 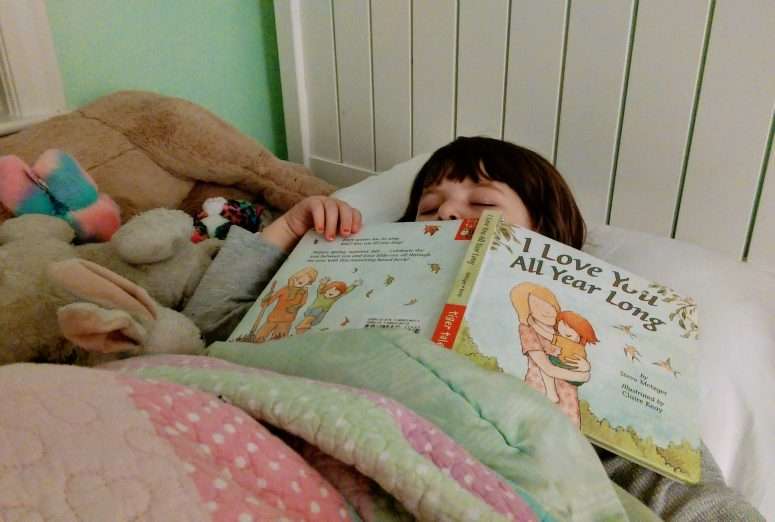 Neither of them lasted very long after dinner. Then again, I probably won’t either. A good day. 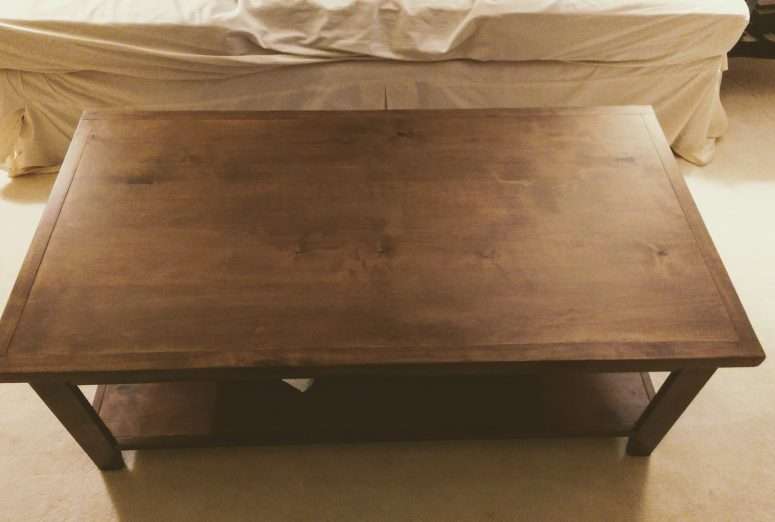 Oh, and a coffee table was purchased. So, Chelle was happy, too.