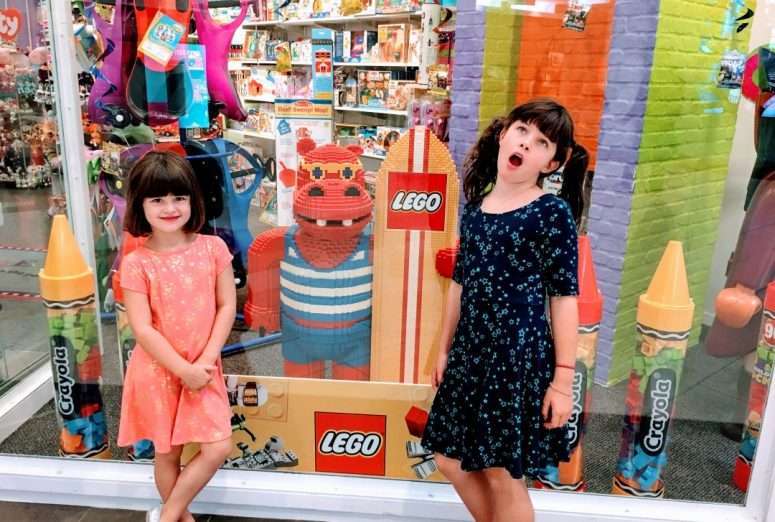 You know if I’m leading with the junk drawer then it was a light day on the agenda in the Donohue household. With upcoming trips next week to both NYC (no kids!) and Chicago (with kids), we purposely decided to take it pretty easy. At least, I did. Michelle and I have very different views on taking it easy.

Basically, Michelle can’t do it. Unless she’s in Hawaii. Even then….. I, on the other hand, have no problem reading a book for 8 hours straight and ignoring the clutter for a time.

This is how we ended up purging all the junk drawers, cubbies, nooks, and closets that had sprung up around the house. C’mon admit, you too, have more than one!

But before we got to the cleaning, we started on the couch. 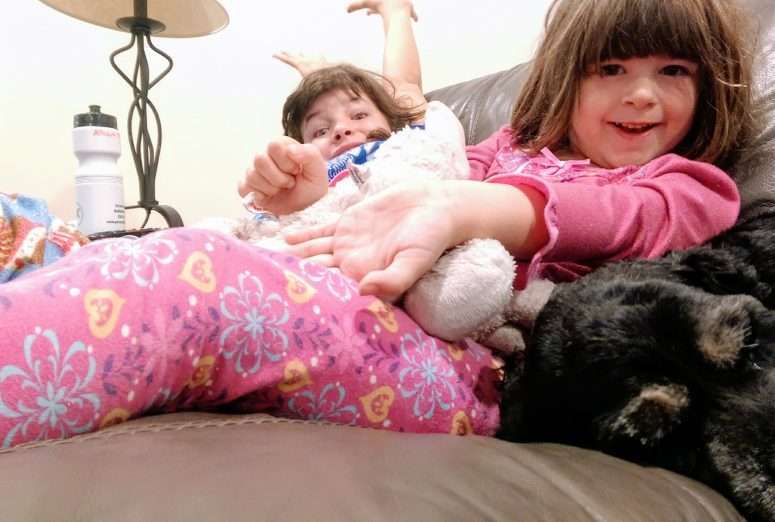 The good thing about 9 a.m. Saturday soccer is that is forces the kids to get moving and not zombie-out on the couch. After one show, it was time for breakfast.

Now, unless we are out to the East Side for breakfast and their Minnie Mouse pancakes, Ally will tortuously dissect any breakfast food looking for the chocolate or the sprinkles. I think we finally found a pancake that Ally will eat without complaint. Thank you Kodiak Cakes Dark Chocolate Pancake mix! 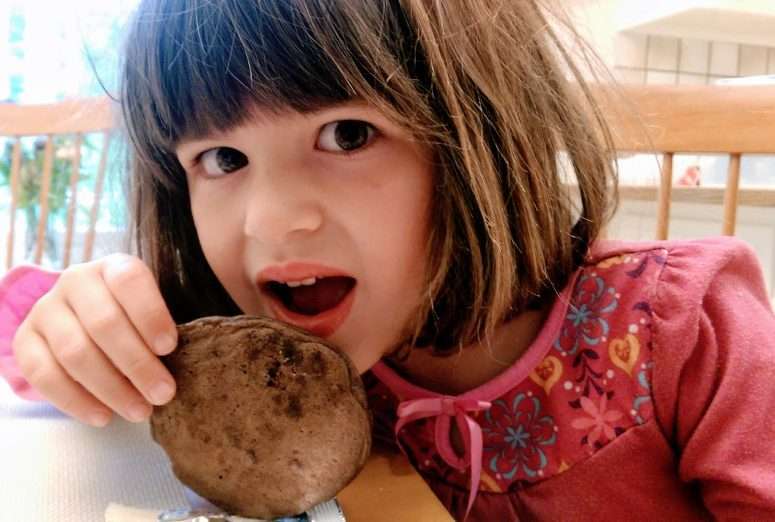 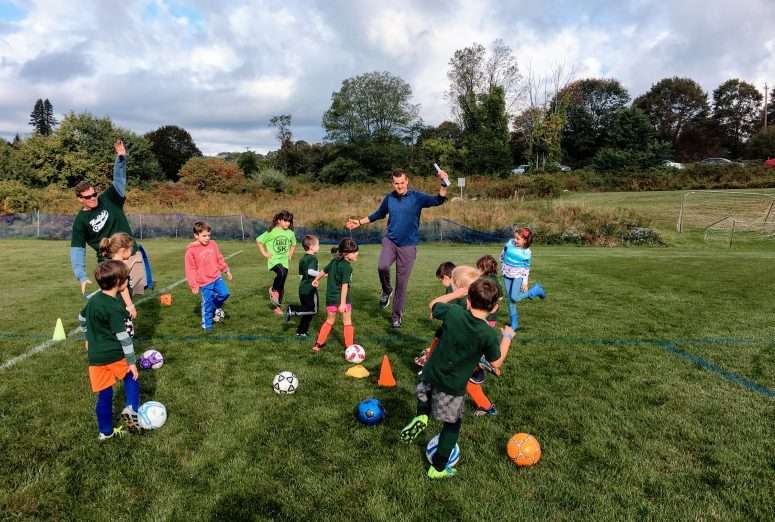 I’m still not sure what ultimately drove Ally’s interest in soccer, but after three weeks she is still loving it. 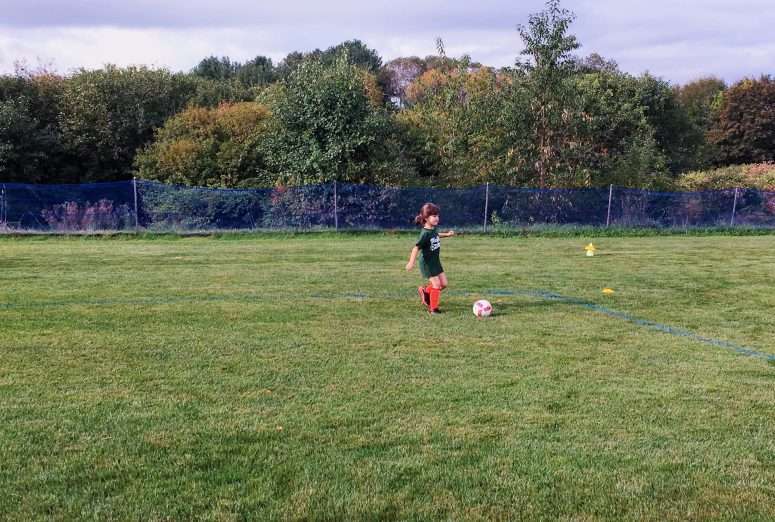 Then again, maybe someone tipped Ally off to the popsicles. Saturday mornings running round with your friends and popsicles? Hard not to get excited about that! 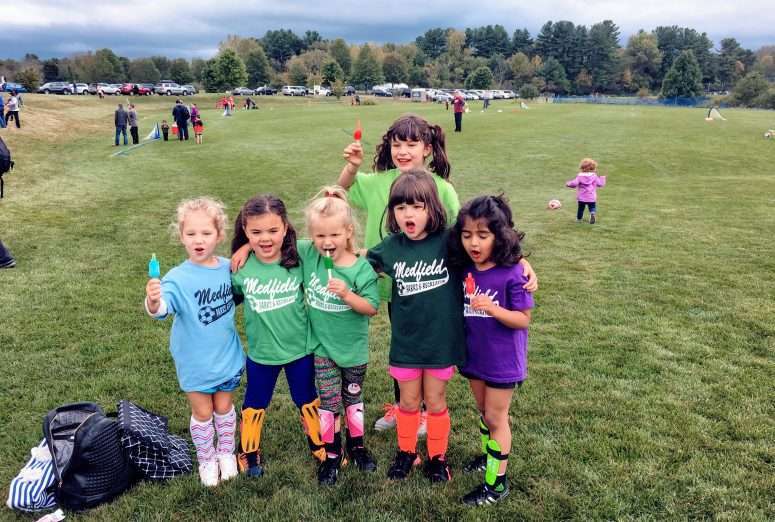 After soccer it was time for the purge. Here’s a pro parenting tip, when aiming to throw out as much as possible, it’s best to have the kids in a separate room. They were not pleased when they realized the plan. 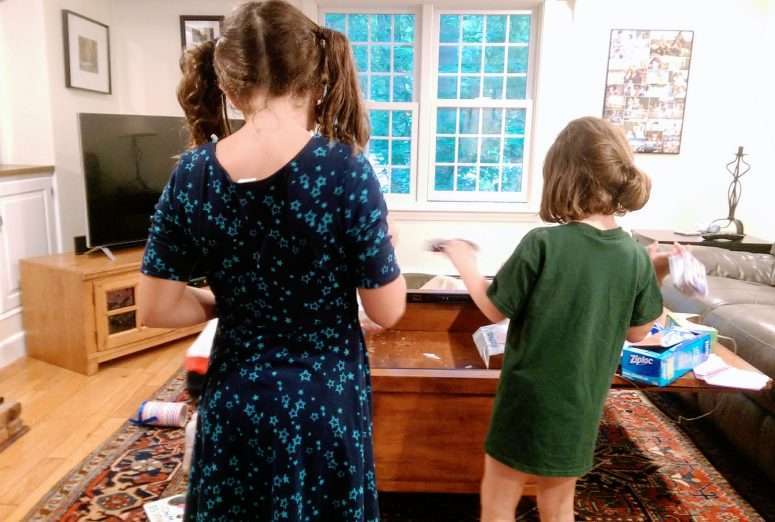 You know what’s a good distraction? Brownies. Now that Cecilia can read she really likes getting creative with baking box mixes. Sometimes those dreams need to be re-aligned with reality and the physics of baking. She had visions of whipped cream and a tiered brownie cake.

Eventually I’ll wean her off the mixes, but it came in handy today. While I lightly supervised in the kitchen, Chelle furiously stuffed things in garbage bags in the other room. 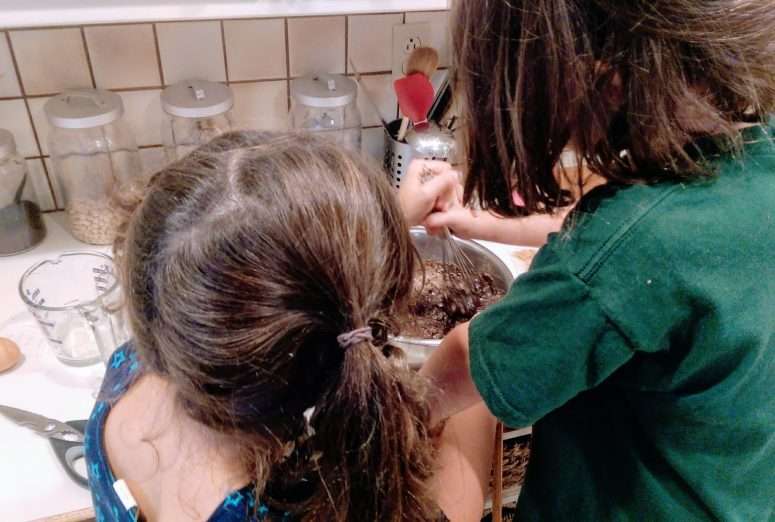 Here they are blissfully unaware that those plastic sunglasses missing a lens from 3 years ago that they couldn’t possible live without is now on its way to the transfer station. The memory wiping power of chocolate! 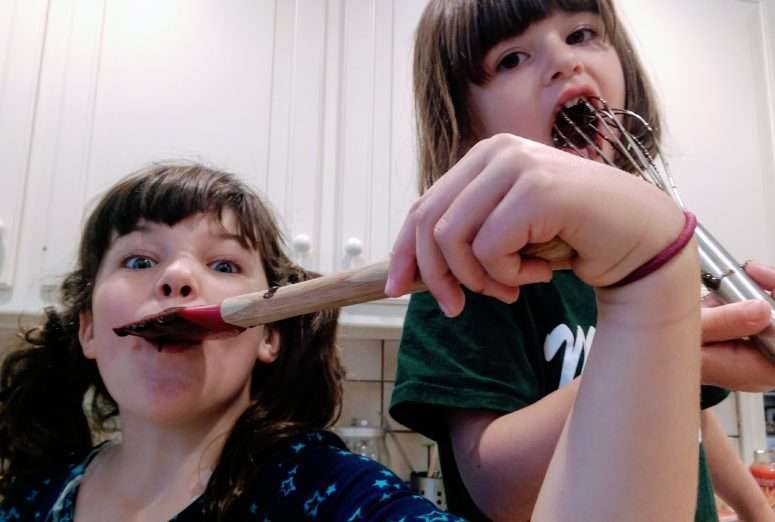 While they licked some utensils, we did decide that feeding them something other than chocolate at some point in the day might be a good idea.

Lunch on the couch accompanied this week’s musical selection: The Sound of Music. We were both relieved that they really liked it. I can still remember renting the double DVD from the library with my sister many, many times.

I feel like Michelle had adoption papers ready if they said anything bad about Julie Andrews or Christopher Plummer. 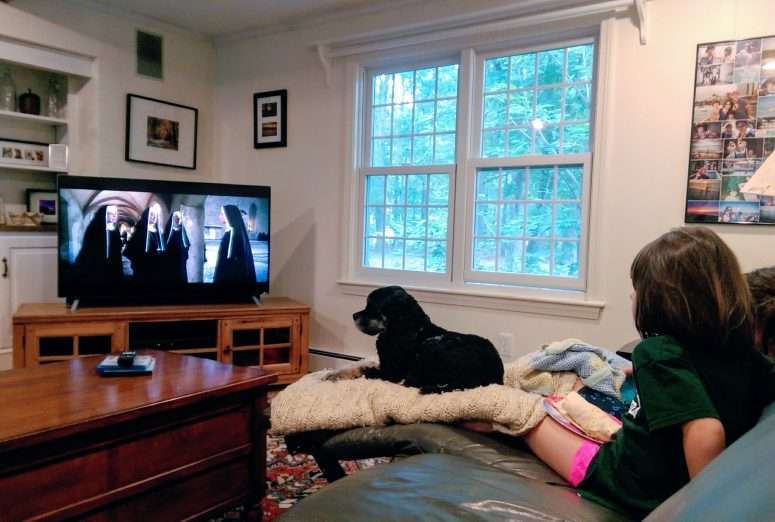 After lunch it was time for piano. You can tell by her serious face that we are moving beyond the two line “songs.” This week brought some Bach. Making mistakes is good for kids even if our ears have to suffer for a few days. By Tuesday, she’ll be crushing it. 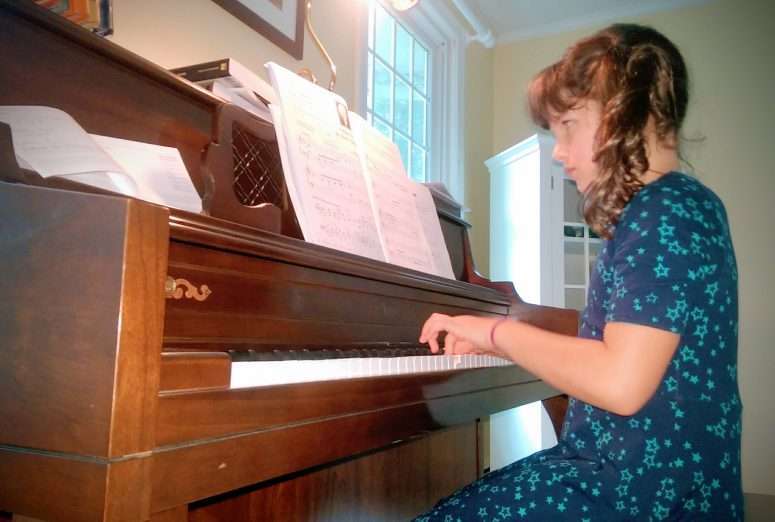 Speaking of our ears suffering, while Bach was happening in the living room, there was a tap show going on in the kitchen. 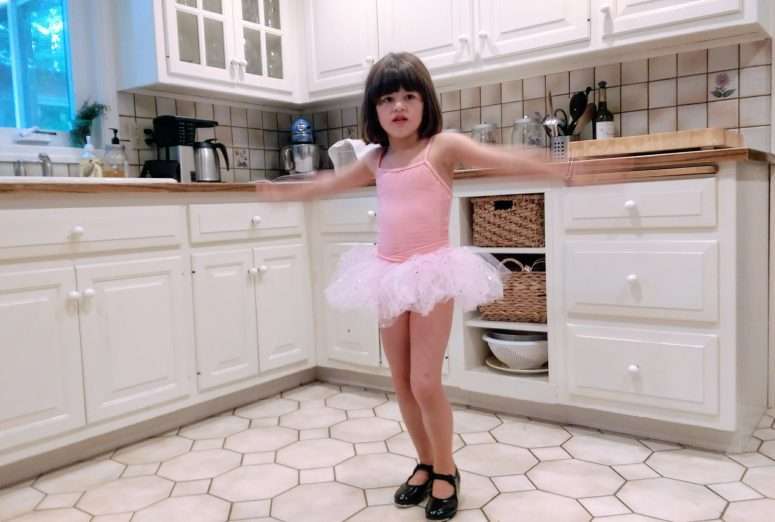 Michelle had one errand to get ready for her upcoming conference. It involved going to the mall. I guess we don’t go very often.  The girls were almost as excited as going to Disneyland. Maybe it was the brownies and the chocolate pancakes, but they were practically vibrating. “This is where teenagers go!” 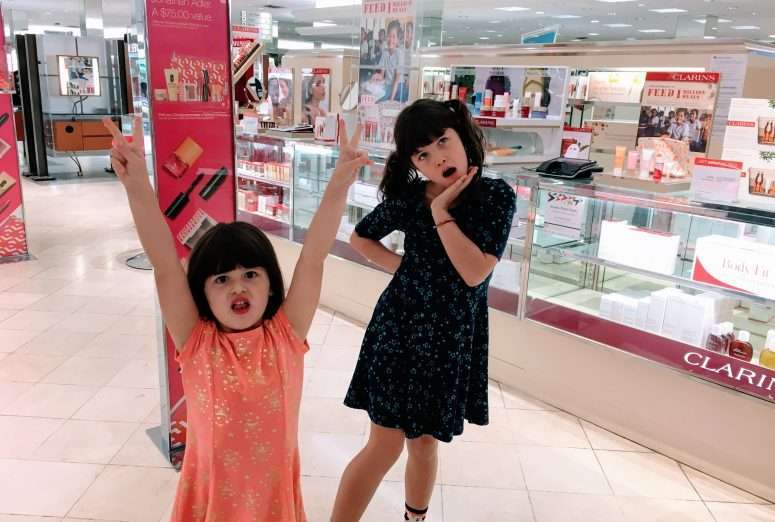 Nothing brings out Cecilia’s cherubic face like the (terrifying) American Girl doll store. Somehow we managed to escape the gravitational pull on our wallets. For now. 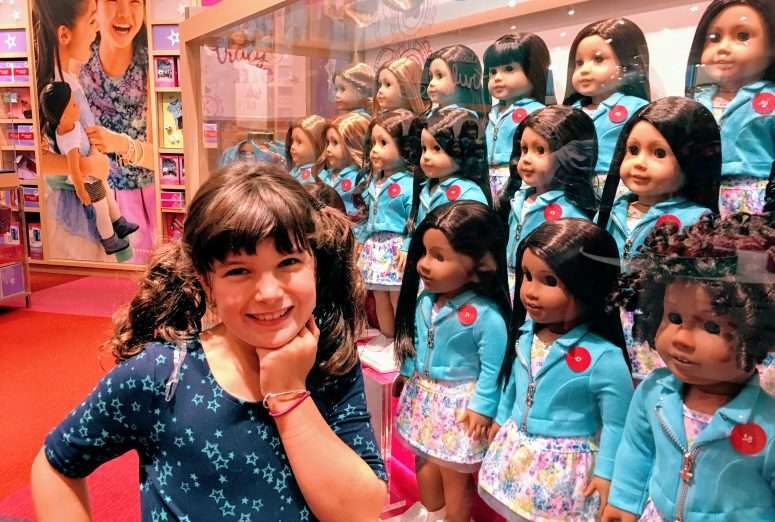 It’s the weekend, so beyond the brownies, there was some dough being made and percolating in the fridge. Fresh bread coming for Sunday dinner. 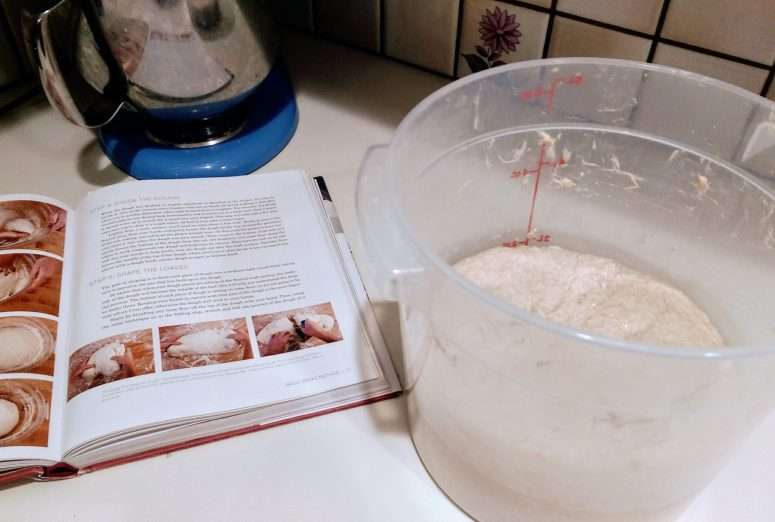 We ended the day back on the couch, making plush, soft nests and watching the second half of The Sound of Music. Lots of questions from Ce about Nazis, but ultimately Edelweiss and Maria carried the day. If only it were that easy. 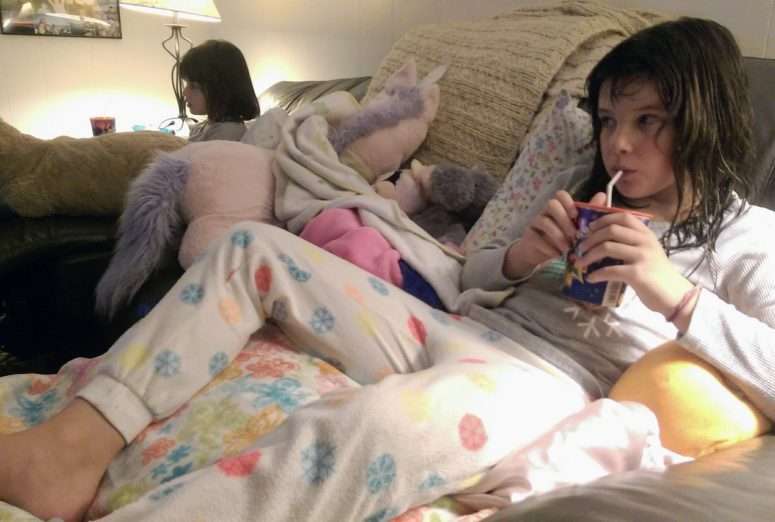 You can tell a lot about a family by it’s junk drawer (or drawers!). Yesterday, our junk drawer said we really, really like glitter, blunt pencils, orphaned crayons and small plastic toys that come in birthday goodie bags.

Today….well if you looked in our junk drawers you might think we are a family of very neat and organized psychopaths. I think we probably fall somewhere in between. At least I hope so.