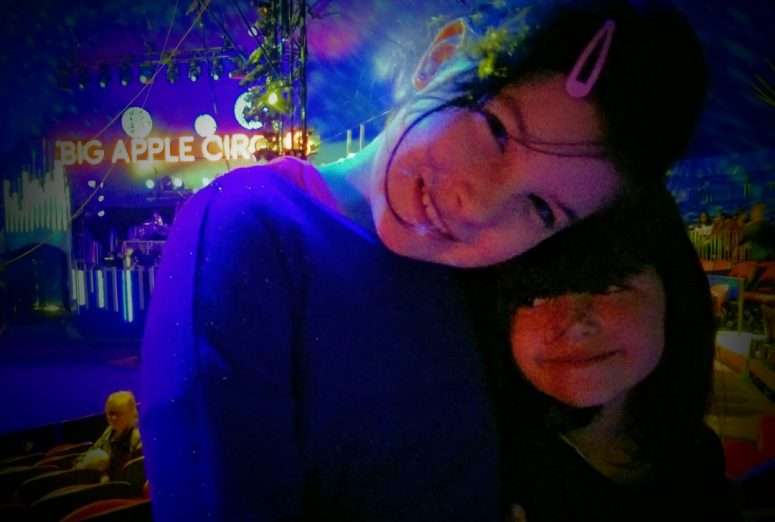 I remember the smells, of course. The popcorn, the sweet spun candy, the sour manure, the excitement.

I remember the motorcycles in the steel cage, the elephants and the roaring lion.

I remember the big red and yellow program, too. Although I might have that confused with something else. My Dad would buy a program for any event held in a civic center or auditorium.

Like many decisions in my life, this one was driven by musicals (and my wife). After they watched The Greatest Showman almost non-stop for the last week, we decided to surprise the girls with a trip to the Big Apple Circus. Because, like Disney on Ice or the Globetrotters, if you don’t take your children to the circus at least once, they revoke your parenting license.

I’ll admit I was a bit hesitant. Maybe ‘Water for Elephants’ ruined the circus for me. Maybe I read one too many sinister Ray Bradbury stories. Or maybe the circus just felt like talking on a rotary phone, a bit old-fashioned, a bit past its time.

Despite being assured (by the website) of a thrilling, death-defying, remarkable, astounding re-launched show (they went bankrupt a few years ago), I remained skeptical. Colored by those stories and too many fly-by-night carnie operations that strand kids on a Ferris Wheel, I was expecting something rag-tag, tarnished, down at the heels. Maybe there would be an occasional spark, but a show mostly on it’s last legs for a last generation.

I wonder how long people have been saying that? Didn’t I pay attention to the movie looping in my living room?

We start on the couch, of course, with both girls up before me. Perhaps they sniffed out that a secret parent plot was afoot? Or maybe Ce’s giant, clomping feet woke up her sister when she went down the stairs.

Before we told them we were going on a secret family field trip. 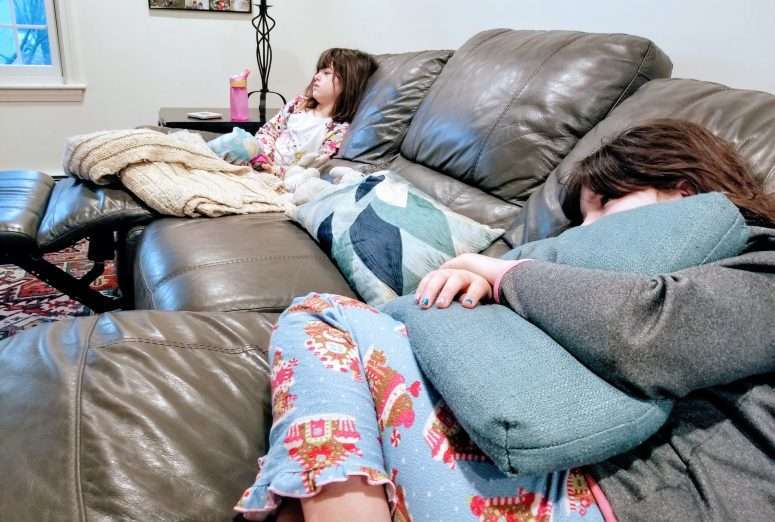 After we told them. Some things can still cut through the trance of Netflix. 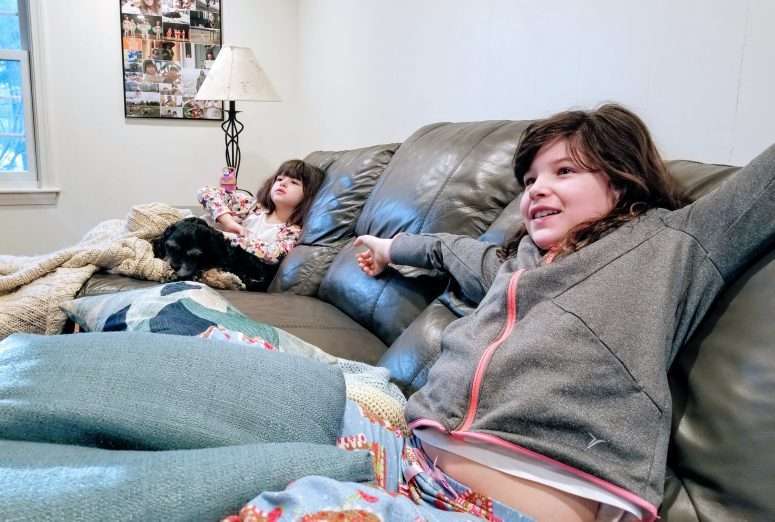 We were going to the early show, but there was still time to meet up for a running club group run. This time, we mixed it up with a trail run around the old state hospital. Actually felt like spring. 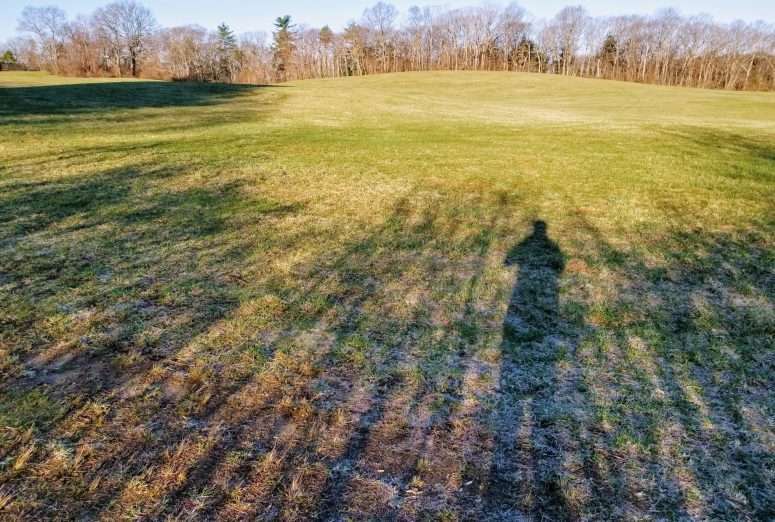 Back at the house, the girls were trying to break Michelle (if anyone was going to break under pressure it would be Mom) and guess where we were going. 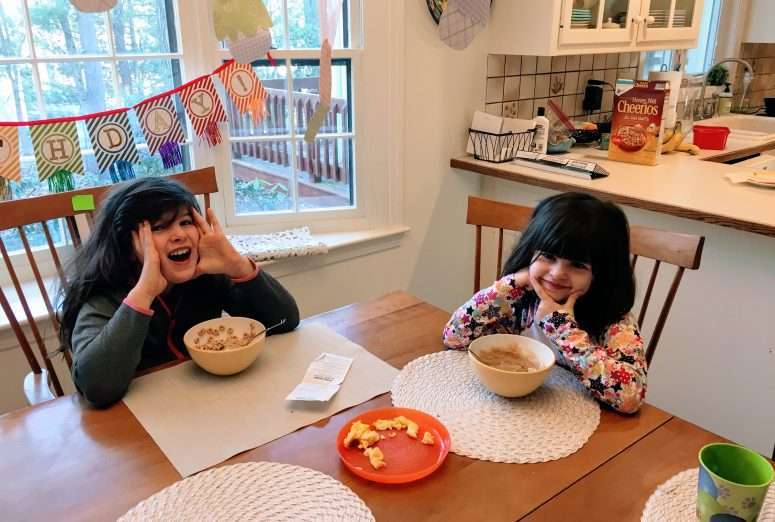 Dash needed a walk and his morning constitutional before we left him alone to nap on the sofa for six hours. 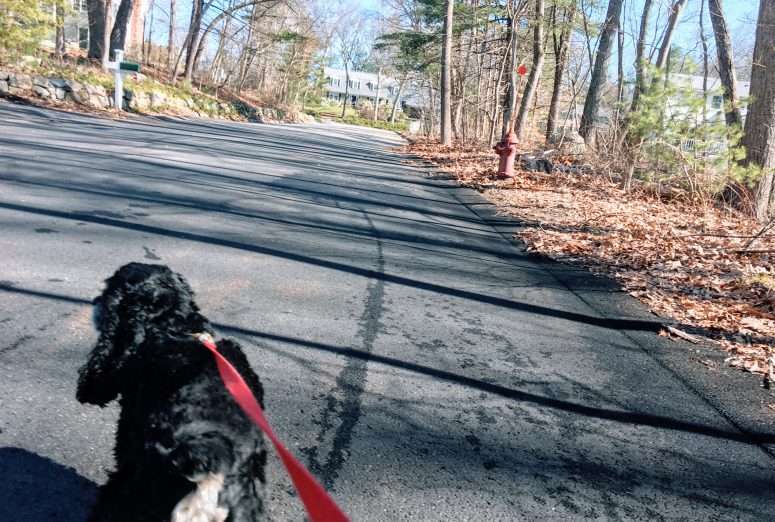 Then it was time to head into the city (it’s playing at Assembly Row in Somerville). There were a lot of questions, analyzing and parsing anything we said. I was beginning to regret our “surprise” decision. 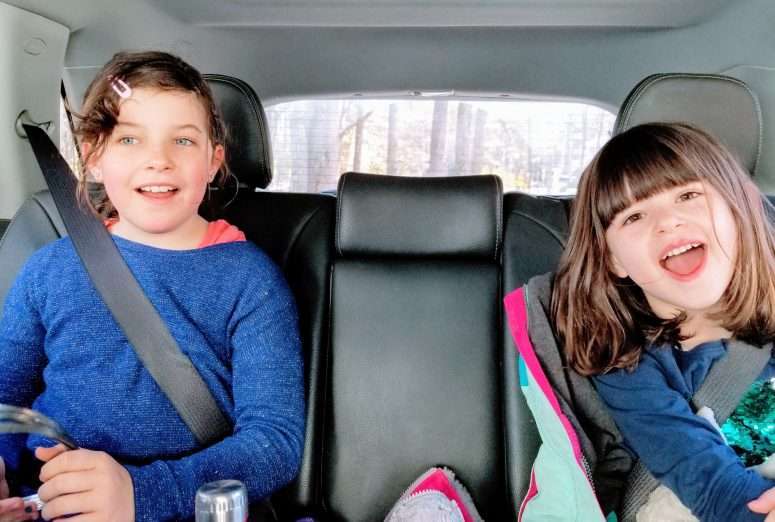 Thanks to that pesky ability to read, Cecilia figured it out as we were parking. By the time we made it to the box office, Ally was almost vibrating with excitement. She may have been under the assumption that Hugh Jackman and Zac Efron worked at every circus. 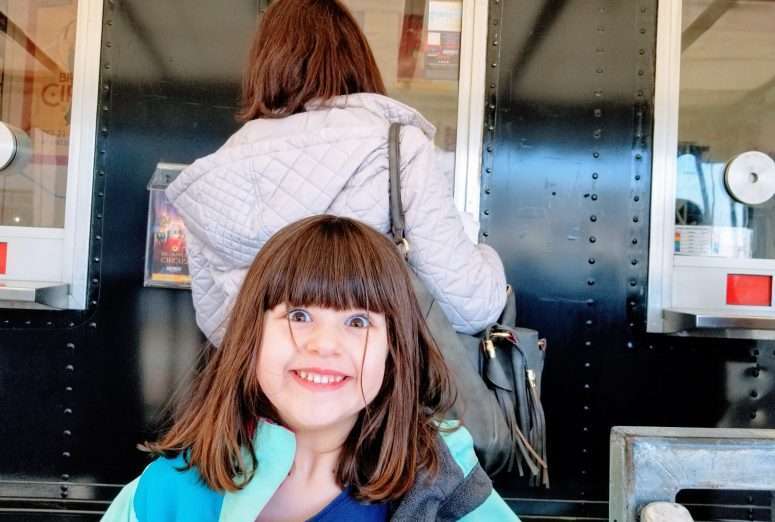 I will say my skepticism was not assuaged when we walked into the front of the tent. The cramped, makeshift souvenir and concession stands had all the hallmarks of those flyer-on-a-telephone pole carnival outfits, but once inside the ring that small, close-up intimacy actually worked really well. The ring and staging didn’t feel cheap. Everything felt bright and fresh and close-up.

Thanks to our last minute ticket deal, we had seats in the last row, but none of the seats are more than 50 feet from the ring. The girls are still sweet (naive) enough to think this is a great thing as we are high enough not to miss any of the action. 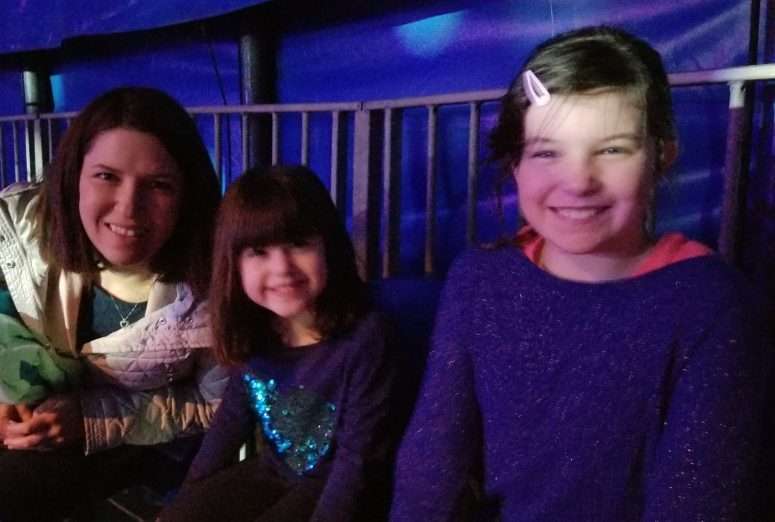 We did have a pre-circus reminder about Dad’s ‘No Light Up Toys’ policy. They were allowed one snack. Of course, the circus has Dippin’ Dots. The ice cream of the future for the last thirty years! 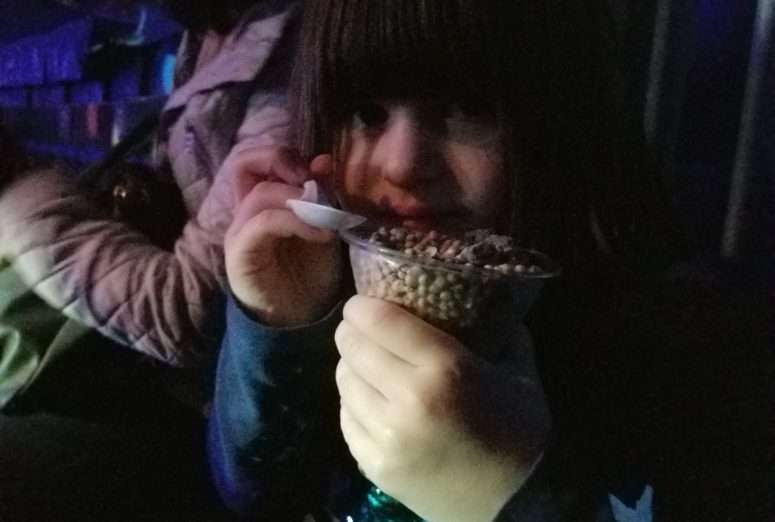 The show itself was wonderful. Perfect for kids the girl’s age. Each act was no more than 10 minutes and the live music and roving (friendly, not in any way creepy) clowns kept their attention between acts. It helped that the clowns were also legitimately funny. I may have laughed.

I’m not sure who enjoyed the show more, mother or daughters. Michelle is now almost as enthralled with circus life as she is with Broadway diva life.

The girls favorite acts were the trapeze (trapaneze to Ally), the dog tricks (all rescue dogs) and the Wallenda’s tight rope walking. 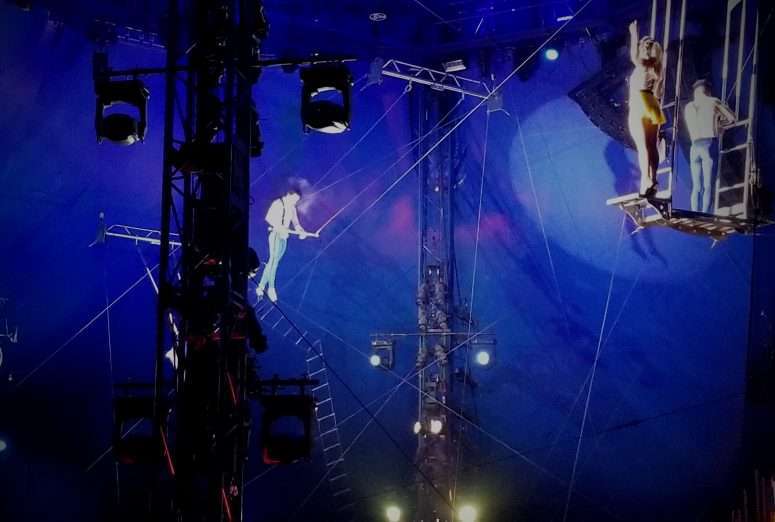 After the show, many of the performers were available for pictures. 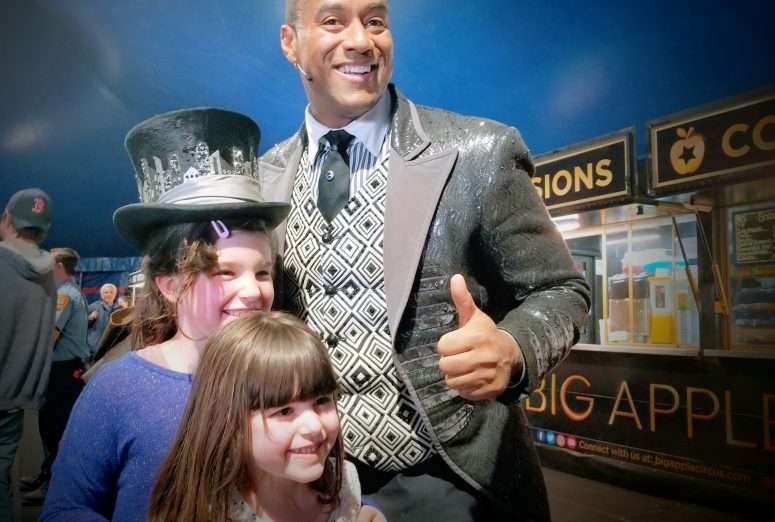 Back at home the girls immediately set to work on perfecting their own sister act. 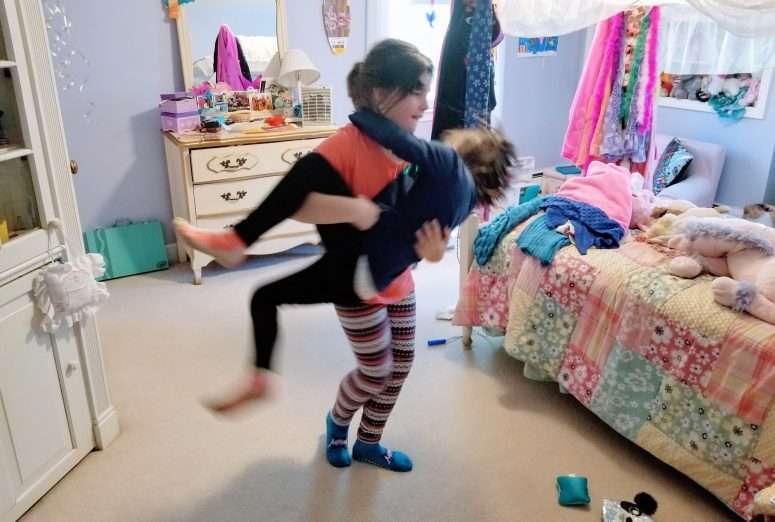 Michelle, perhaps still daydreaming of running away to the circus, did some yard work. Landscaping is perhaps a more practical back-up career. 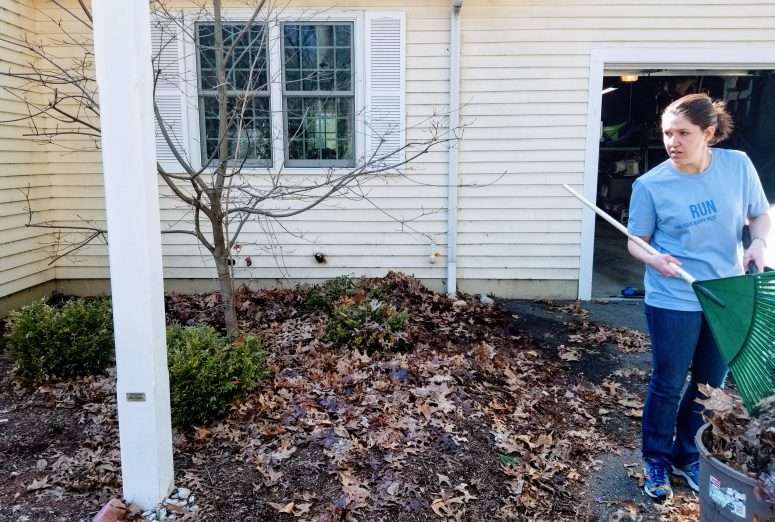 The circus wasn’t the only thing on the agenda. We headed over to friends for a grilled cheese bar. That’s right. Grilled. Cheese. Bar. It gets crazy (and tasty) in the ‘burbs.

My favorite combo was roasted cauliflower, caramelized onions, spinach and gruyere on sourdough. 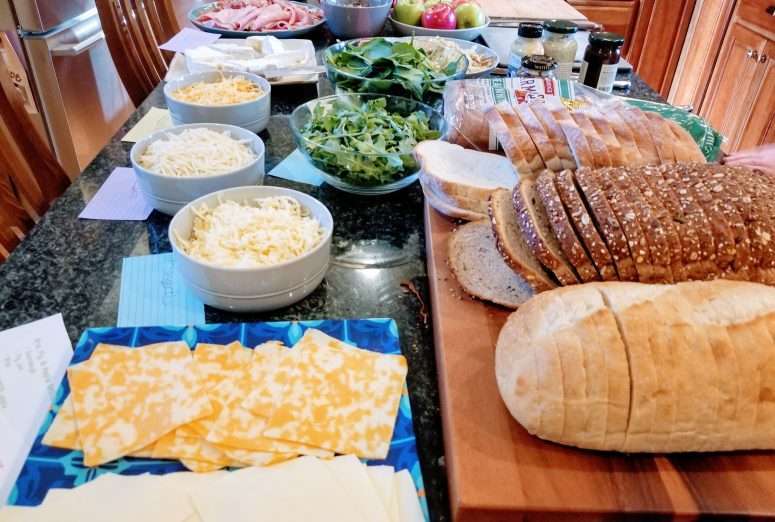 Not decadent enough, we brought a chocolate chip cookie pie that met with the girl’s approval. 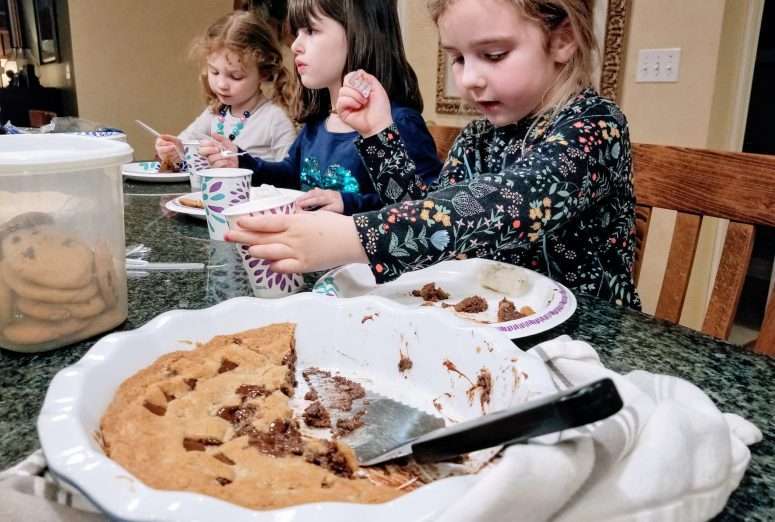 Each of these gatherings almost always has some sort of kid-produced “show” as entertainment. Tonight, fittingly, ended with a tiny circus performance. 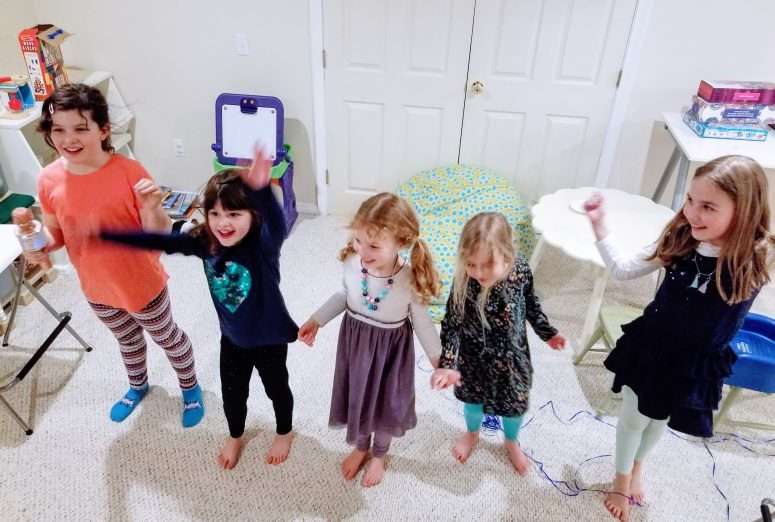 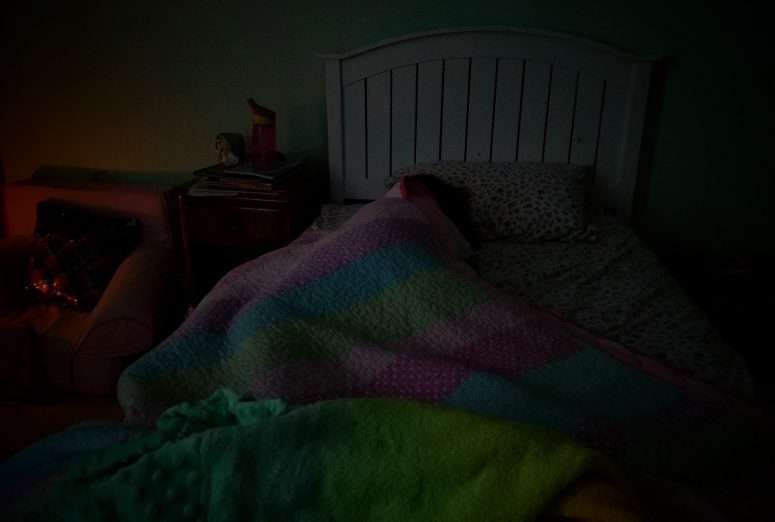