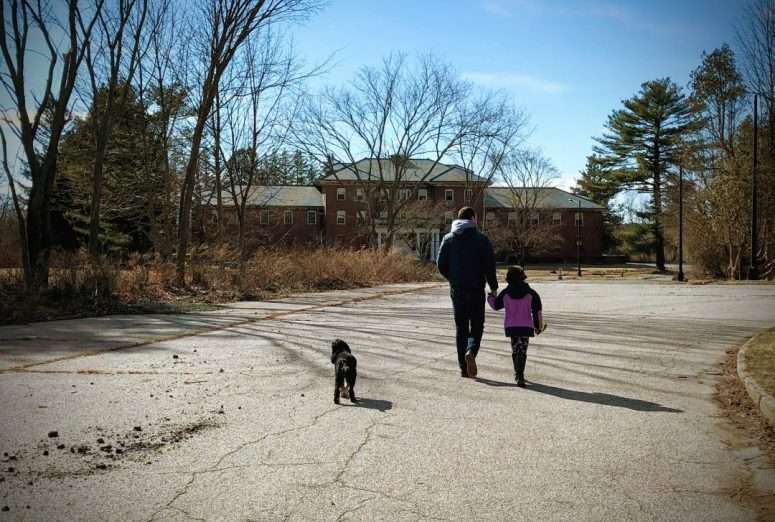 The big fourth grade project is a report on Canada. This includes research, a typed presentation, and an artifact. One of the things I like most about Cecilia’s teacher is how she gives the kids the time and space to do things on their own. For better and for worse. Sorry, for better and for learning opportunities.

Watching Cecilia ‘type’ her slides was almost viscerally painful. Until she discovered dictation! We thought about stepping in but if we are going to let them figure things out why can’t she use all the tools on her Chromebook.

The toughest part for me to witness has been the design of the slides. I worked for almost 8 year as a consultant. I spent a lot time using PowerPoint. A lot. I would sometimes dream in PowerPoint. People would open their mouths and a perfectly formatted slide would pop out with their dialogue.

Cecilia’s slide dialogue would have been…difficult to read. She enjoyed different fonts. Explored different font sizes. Discovered rainbow fonts. She discovered Comic Sans. We had to have a chat.

As a designer, I will not let my child submit a report using Comic Sans. Time and space has its limits.

Woke up to some snow. On Friday, a box of new snow gear had arrived for next year (Michelle is good at the off-season sales). The girls were excited to potentially sneak in a try out early. 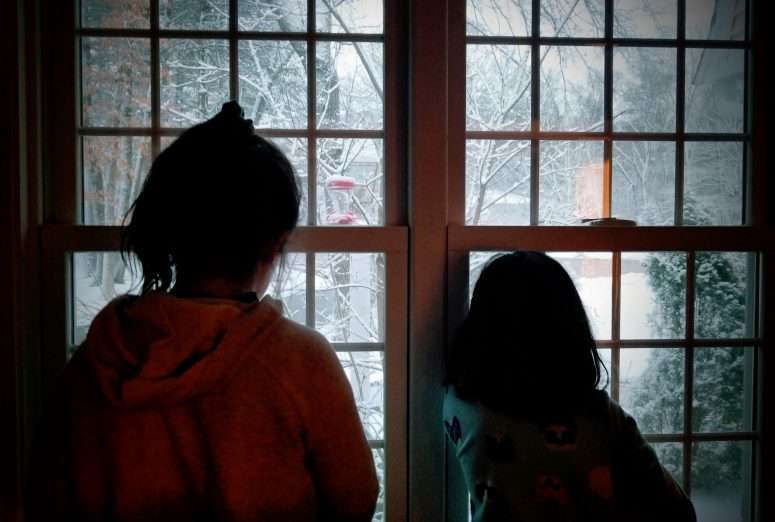 Dash just seemed annoyed. He is not a snow dog. Or a rain dog. Or a gets-his-paws-wet dog. 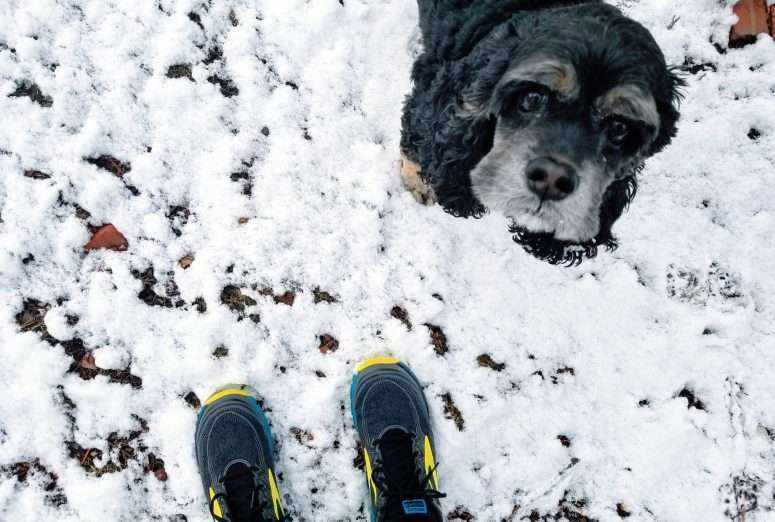 When they realized it wasn’t going to be enough to sled, they retreated to the couch. It was fourth grade night out on Friday and things were….slow…and cranky getting started. Cecilia was not keen to photographed. 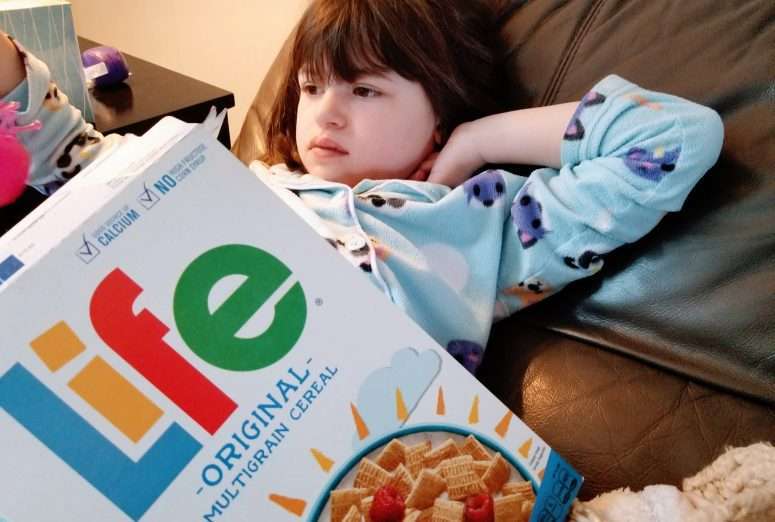 I beat a hasty retreat and, after a week off for the Shamrock 5k, was back with the Soles for the Saturday run. It started cold and windy and finished cold and slightly less windy but now I was sweaty. But feeling better for getting it done.

The hot question all week in our house was bangs or no bangs. Ally was waffling on whether to grow them out or get them cut. Vision was being impaired so a decision needed to be made.

Ultimately she decided to cut them. We did a last photo shoot with the hair clip before she headed to the salon. 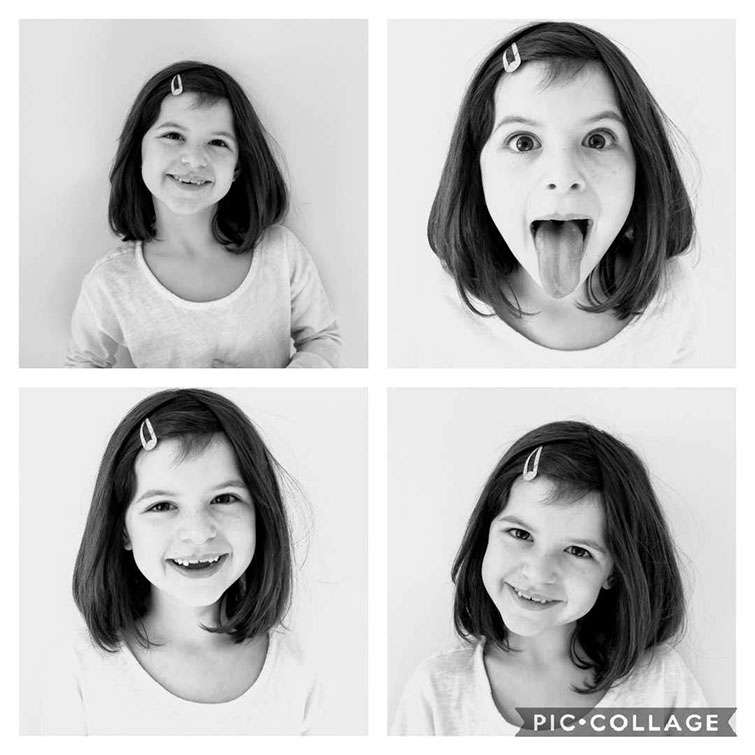 Bangs done. She seemed comfortable with her decision. 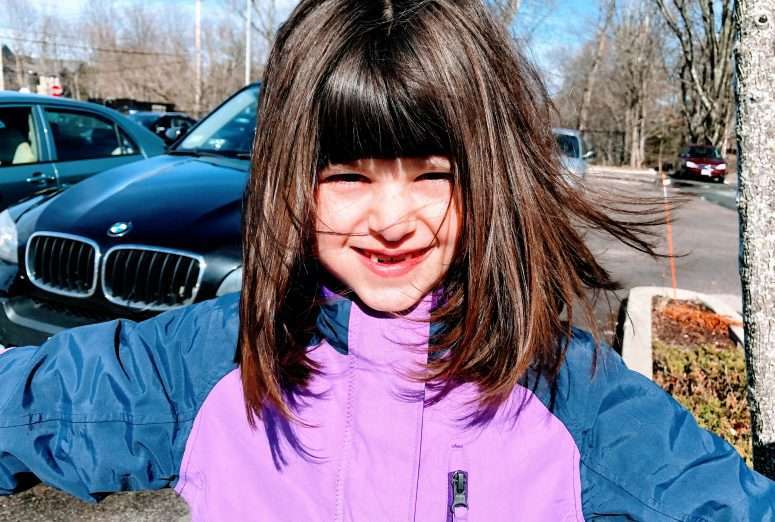 After the haircut there was some unexpected couch shopping. This was not the one Michelle ultimately bought. 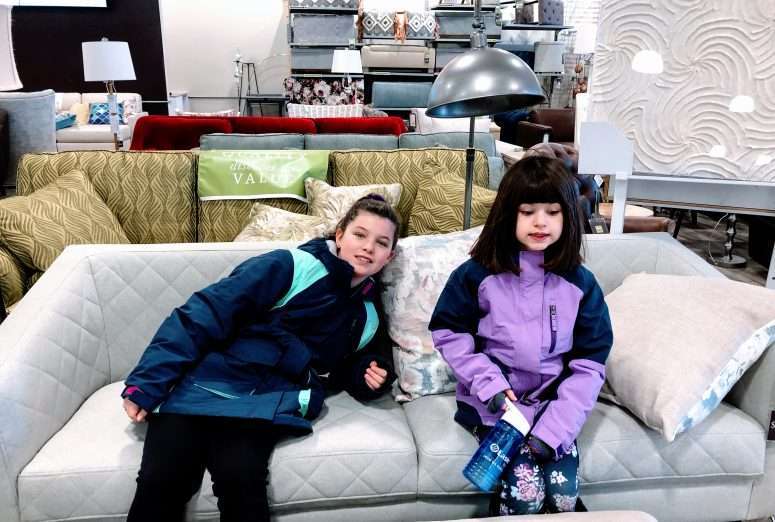 Lunch was ready when they returned but Ally informed me it would take “months” for her to eat all the apple and carrot slices on her plate. She really put some drama into it. 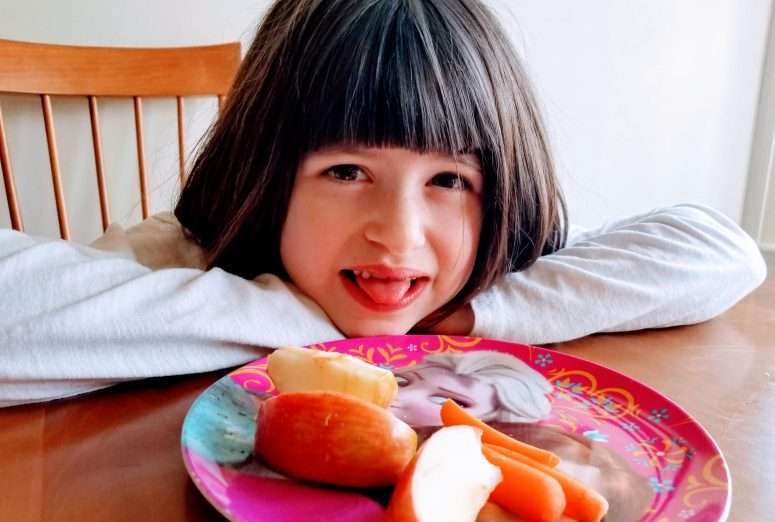 Months later the girls were outside. Snow was gone. 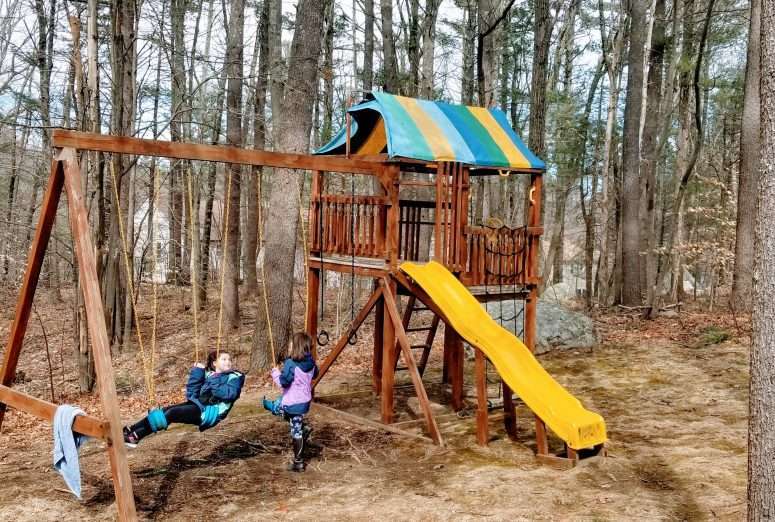 We celebrated National Puppy Day by taking Dash on one of his favorite off-leash walks at the State Hospital. 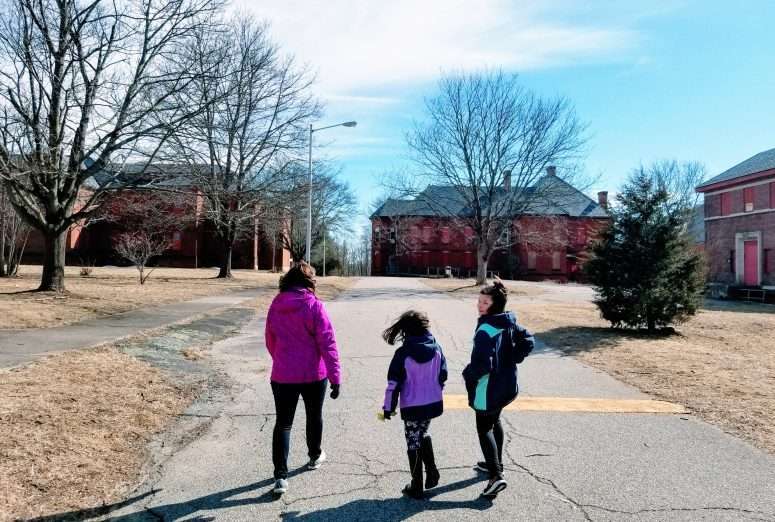 Was it a strange decision to get a puppy a month before Ally was born? Sure. Do we regret it. Nope. 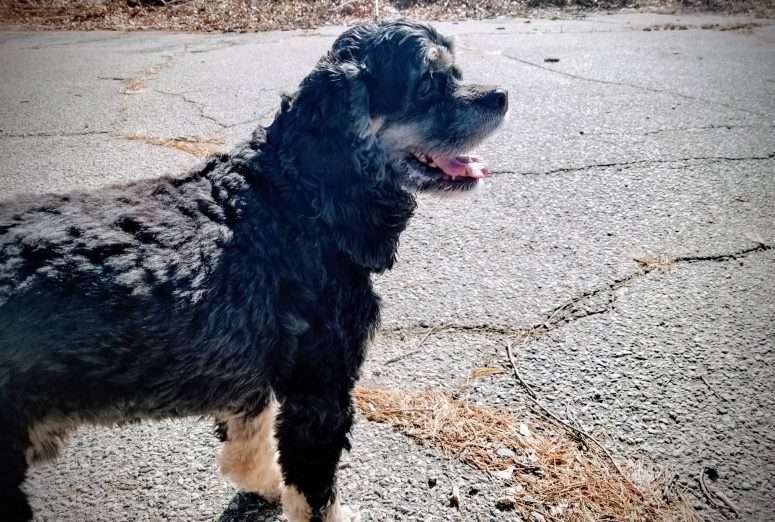 We hoodwinked the kids a bit after getting them out of the house for the walk. We hit up Saturday church. Cecilia is convinced the Saturday mass is longer and more rigorous than a typical Sunday. They weren’t pleased with our subterfuge. By the time we got home it was wine time. To be clear, for the adults, not the kids. 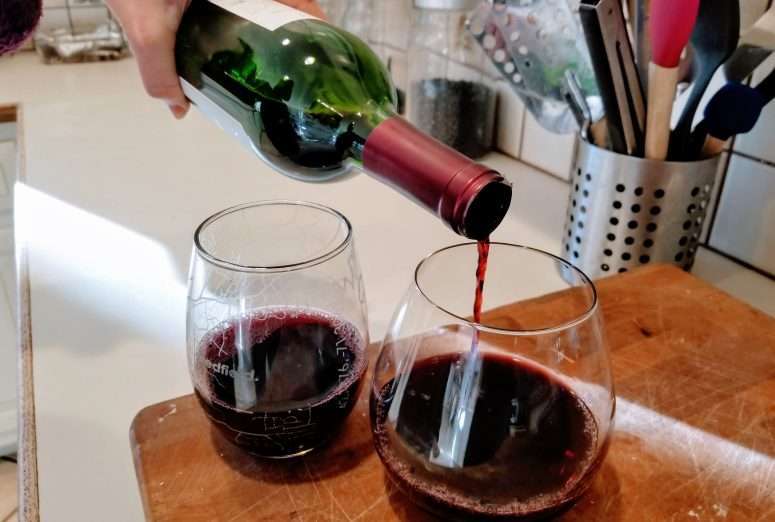 Ally hit up the crafts. We lost track of Ce during this time. 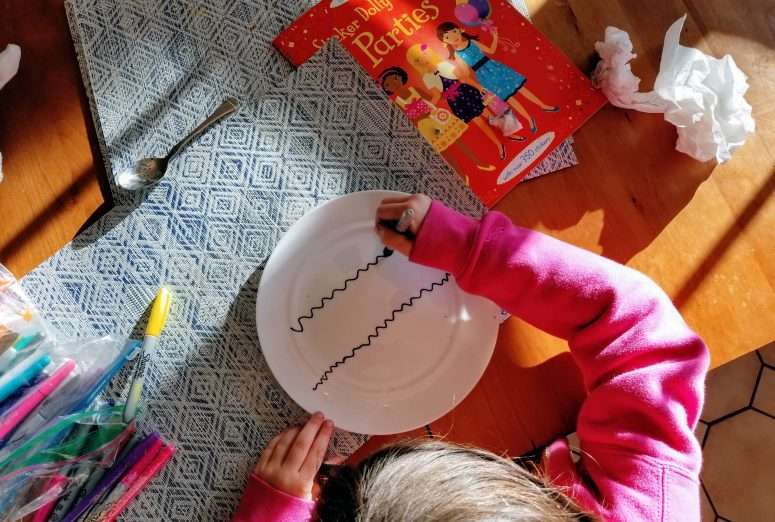 Ally was much happier with her plain plate of mac ’n cheese and fries for dinner. There was a green smoothie in the cup. 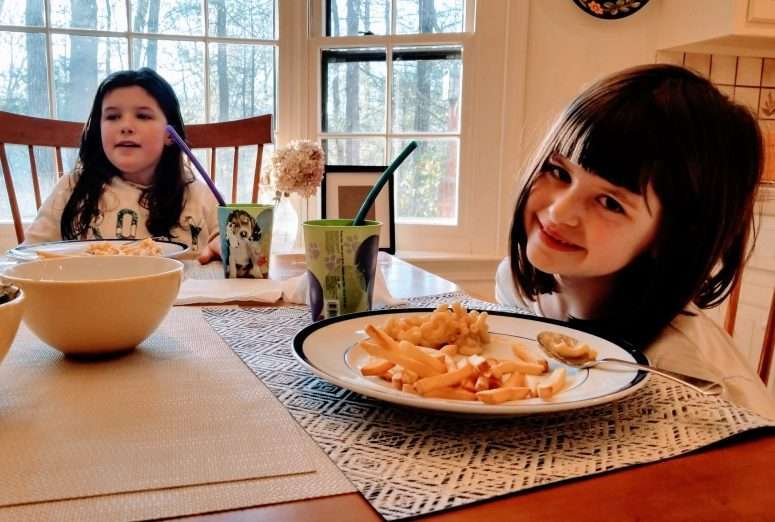 Michelle has this fascination with The Lawrence Welk show re-runs on PBS. The girls find it completely inexplicable despite their mom’s vast, vast enthusiasm. Cecilia calls it that “weird music show that was on 90 years ago.” 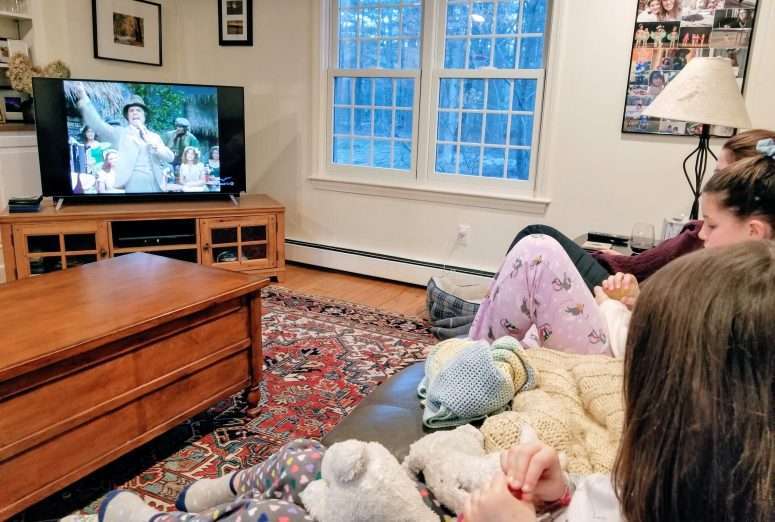 After having our boiled blowout last weekend, we didn’t want to shortchange St. Josephs so, while we were a little late, we did make up some mini zeppoles with cannoli dipping cream for dessert. 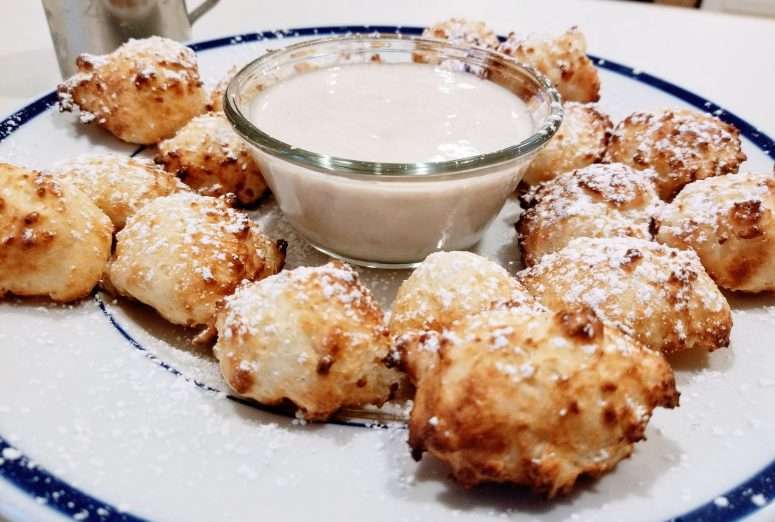 The girls were almost as confused by these as Lawrence Welk but they didn’t complain once they started eating. 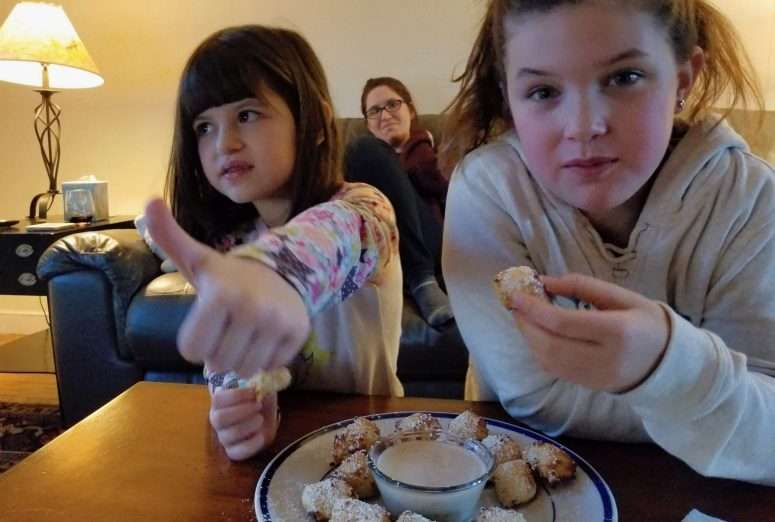 With a dusting of sugar and the Champagne Lady singing us off to bed, another Saturday was done. Let’s hope there were no powerpoint dreams.