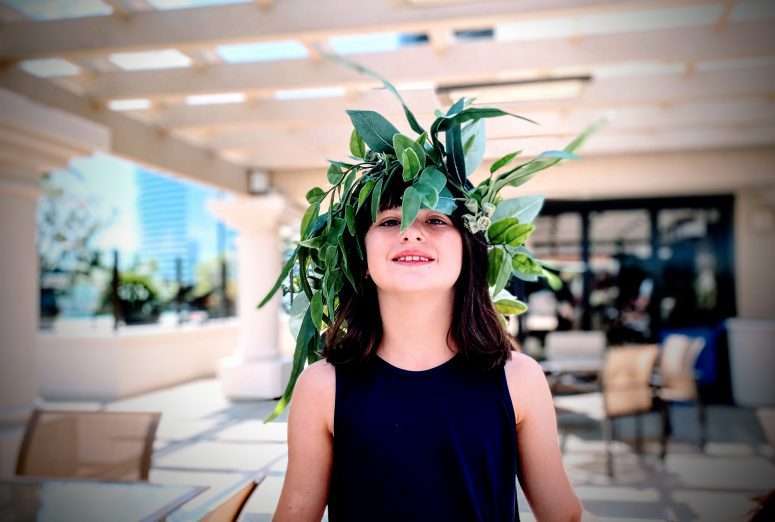 We are on vacation, visiting family in San Diego, and celebrating Michelle’s parent’s 50th anniversary. That’s an increasingly rare and wonderful milestone showcasing a long and successful partnership.

Michelle likes to tell the story of how my grandmother pulled her aside a few weeks before our wedding and told her in no uncertain terms that there were no divorces in her family and she didn’t intend to start now so Michelle better be sure. Either my tiny, little grandmother had a terrifying side that I never saw or she was working some powerful voodoo because 17 years after that chat, and many weddings later, there are still no divorces in my large, sprawling, extended family.

Or maybe we just all had good role models. I’m a big believer in modeling how and what you want your kids to learn. Fifty years of marriage is a heck of a strong example.

No traditional couch photo on vacation to start the day but who doesn’t love Mom jumping in their bed.

The Residence Inn decided to stick it to parents early in the day by putting out a whipped cream station at the breakfast buffet. This was is in addition to the Nutella packets that were also available. Ally took full advantage.

Ally was almost vibrating by the end of breakfast. She could barely contain her dance moves in the elevator. We took a walk along the water past the Midway museum.

Nothing will tire a child out than suggesting than walk more than 50 meters under their own power.

Ally refueled with some strawberry lemonade, a concha, and some fruit. Sugar in three different delivery mechanisms. Sort of impressive.

The afternoon was all about the bride and groom and reminiscing about fifty years.

Chocolate cake and a magnum of champagne are proven memory aids.

Not Vueve but the girls enjoyed playing along and learning the proper wedding moves.

You really can’t cook something long enough for Cecilia. And she really only trusts herself to cook any meat that might retain a hint of pink when others think it’s done.

After Ally took down some cake and Lappert’s ice cream (not pictured), she needed to once again burn off that sugar rush. Pretty good tuck form.

And you know we wouldn’t escape a Saturday without some dancing.

Cake, bubbles, family, sunset, and a grandchild dance revue. I hope my 50th anniversary works out half as well. You can read all about it in the blog in 2054. I’m sure I’ll come up with new glitter jokes by then.