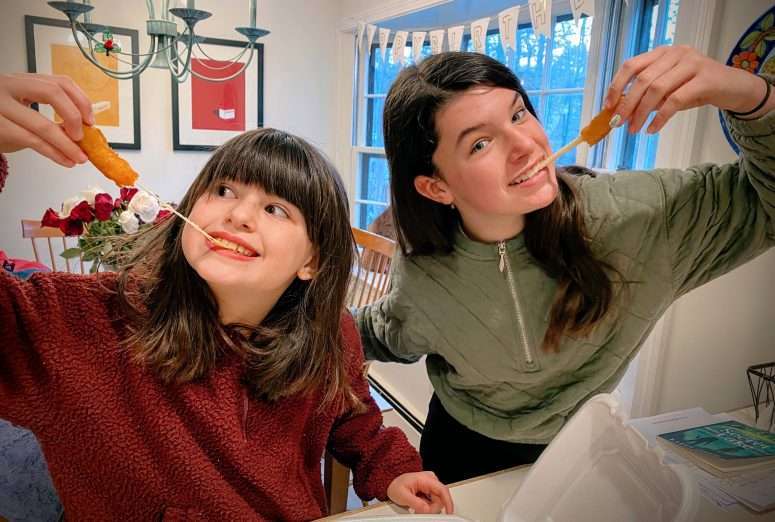 I often complain about the kids in this blog, in a humorous way, but still usually some chiding complaint. I thought I should at least offer a positive story once in awhile. Just not too often. Don’t want them to get inflated egos.

Cecilia didn’t do well on a test (sorry, can’t call them tests anymore – check-in) earlier this year. To be fair, given the email we received from the teacher, many kids did not do well (which might make me think about the teaching methods…). I digress.

Cecilia latched onto this group failure as her life preserver. Sorry, not going to work, in school or life. You will make mistakes. Nobody is perfect and we all make our fair share of mistakes. Even Dad bloggers. Maybe one or two a year.

However, if you do not take responsibility for the mistake and do your best to correct it, then you are committing a second mistake. You can probably picture me telling her this. Or you probably have given your own kids similar advice. Take responsibility. Do the right thing, even though you may feel embarrassed by your previous actions. Don’t compound the error.

You also probably walked away wondering if any of that sank into their teenage brain.

Well, last Wednesday, I received an unexpected text that Cecilia was staying after school for extra help to prepare for a te-, eh, check-in the next day. She listened! She didn’t compound the error! She still rolled her eyes when I picked her up, but I’m sure she was smiling on the inside.

It’s good to know your limits. Minus 16 windchill was too cold for me to attempt a morning run although it would have been interesting to put my world-class sweating ability up against those temperatures.

Michelle and Dash got their workouts in, too.

Please notice the fresh vacuum tracks. Nothing worse than trying to hold a plank and studying how dirty the carpet is.

When one is up, the other is down. Ally is usually a bit more theatrical than Ce with her emotions. Especially when she first wakes up.

Last week we watched Tick Tick Boom and since them Ally has really ramped up her composition game.

New year, same reaction. We missed National Dress Up Your Dog Day on Friday, so the girls tried once again to put a costume on him.

He stood paralyzed for two minutes before they took mercy on him. Not sure he has much of a future on Tik Tok.

A freezing cold day is mostly a great excuse for me to turn on the oven and bake some bread because despite the temperatures outside my frugal nature will not allow me to override the existing heating program. Put another layer on kids. Or come stand by the stove.

Mixed results with a new recipe for brown sugar oatmeal bread. It was a little dense. I might have overproofed it or the sugar in the dough messed up the yeast with the overnight refrigeration.

Next parenting milestone? Having the kids be old enough to get out of the car and empty the trash themselves at the transfer station.

We have our first bar mitzvah later this year and, along with attending professional ballet performances, I have dress shopping exemptions written into the marriage contract. So, the girls went off to the mall.

Ally would never miss a chance to dance in front of multiple mirrors.

They went one for three on dresses. Still time. Cece still might grow another six inches before May.

$27.12. That was the cost of a large pizza and mozzarella sticks and a night out without kids. They seemed equally enthused to get us out of the house. Money well spent all around and cheaper than a babysitter.

Almost cheaper than the cocktail.

We tried Da LaPosta in Newton again. The second time around was much the same as the first visit. Solid, upscale, and creative Italian food centered around Neapolitan pizzas. The dough and toppings for the wood-fired pies were interesting but personally cooked just a little too long for me. The oven spotting overwhelmed some of the subtler flavors.

Standout pie was the fig and rocket.

The final stop of the night was back to school. Twenty-five years ago, I scooped ice cream at a shop across the street from BC. Michelle seems to retain no memory of this but it happened. My employee of the month plaque is still on the wall. Not really. But almost nothing else had changed inside. It was a strange time warp.

After some cajoling (definitely not by me – I was hiding under the table), they even let me back behind the counter. Next time we need to bring the girls just so Cecilia can be equally mortified.