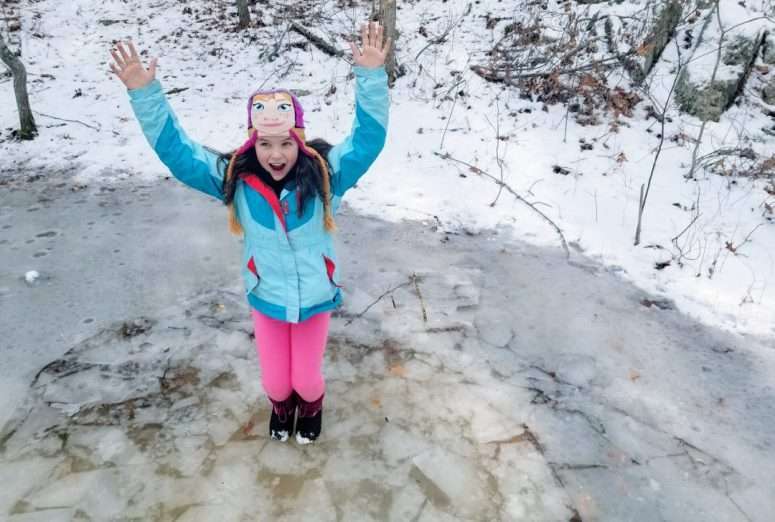 Cecilia is her own unique human being. That blinding realization hit me this week. That seems obvious, right? But I think I needed to really fully recognize and grasp that simple fact in everyday life, not just as a fuzzy truism. I’m trying to be a more positive parent in 2018 and a big part of that will be understanding that Cecilia is not a copy of me. She doesn’t learn like me. She doesn’t like the same things as me. She doesn’t react like me.

The more she is out on her own in the world the more she is developing her own individual personality and chosen path. Instead of reacting with frustration or anger when she struggles or approaches something differently or unexpectedly, I will try to be supportive. This will mostly come up with homework. I simply don’t remember learning to read nor do I know all the new math strategies. When she takes, what I perceive, as the roundabout way to an answer, I need to be patient.

All of this doesn’t mean she gets free rein. I’m not insane. Limits are a very helpful and useful parenting tool! I just want my reactions to be more compassionate and understanding that she is her own person and will develop and learn at her own pace. <sigh> So easy to write, so hard to do.</sigh>

We started on the couch with Pee-Wee’s Playhouse. How’s that for a non-sequitur? Believe it or not, it’s even more weird and demented than you probably remember. The girls loved it. There’s an ongoing debate right now on whether Pee-Wee is a man or a boy. Cecilia says he is definitely boy because he acts stupid and still has his baby teeth. Also if he did this show as a man it would be really strange. Hard to argue with that. I just enjoyed seeing Phil Hartman again. 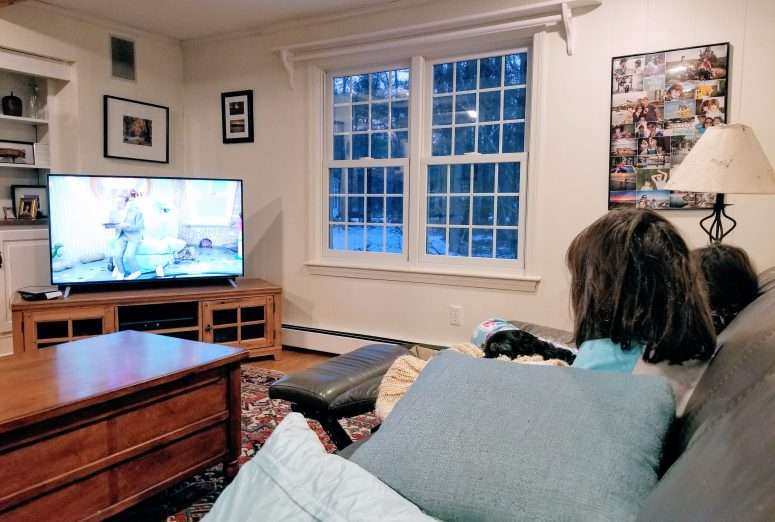 After a week off, Cecilia’s was back in the breakfast business. If she ever opened a breakfast joint, she says it would be called Buffet Queen. 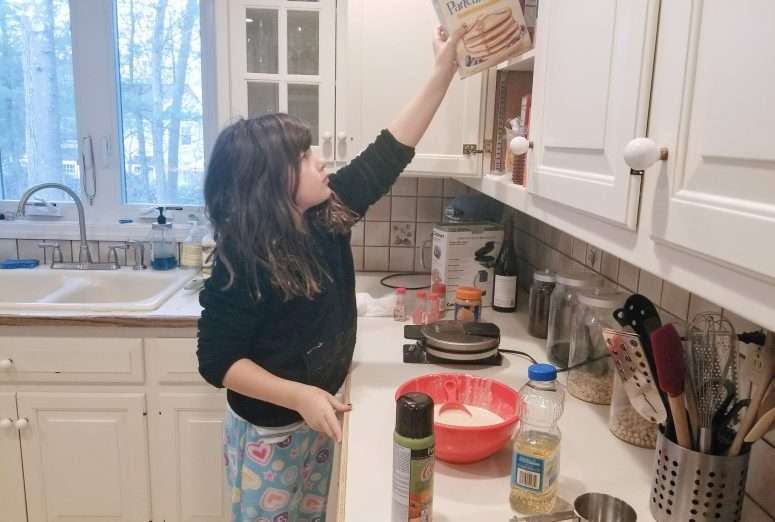 She made waffles this morning. They were legit. Sometimes the waffles from the iron can be soggy and dense. These were light and super crispy. No wonder Dash was drooling. I guess I shouldn’t be surprised at this point. She’s some kind of short-order breakfast savant. 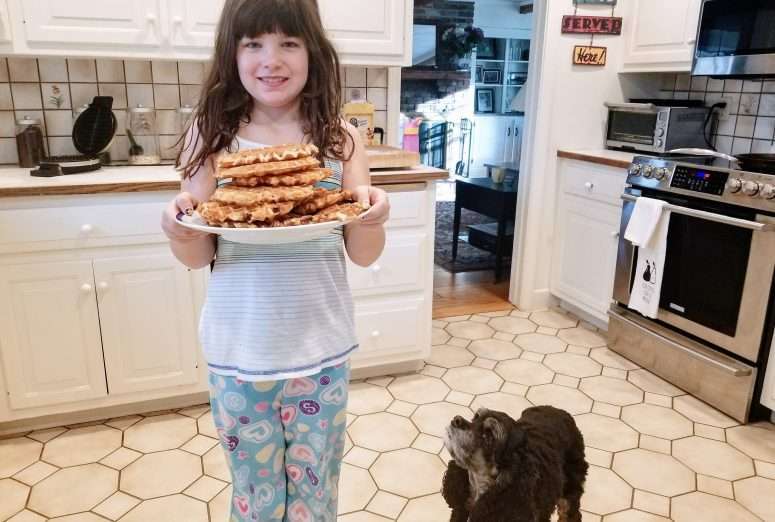 Ally is just not a morning person. It’s best to steer clear of her for the first few hours that she’s awake. She eventually ate her waffles. 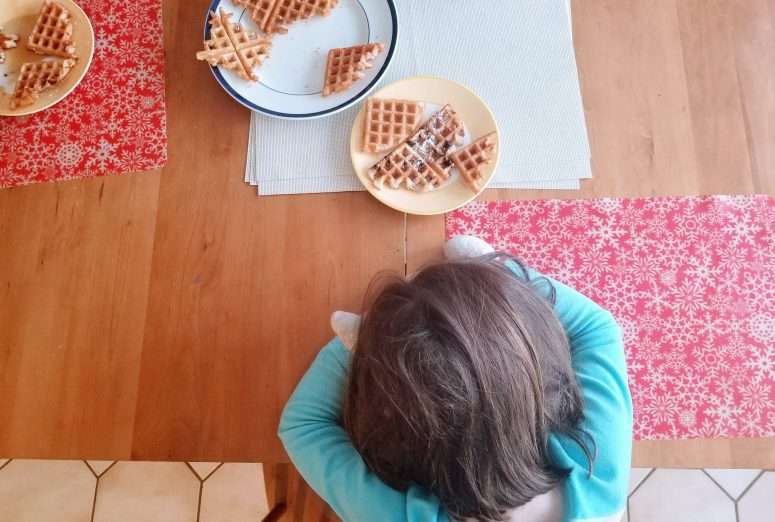 After breakfast, Ce and I took Dash out for a walk in the woods. 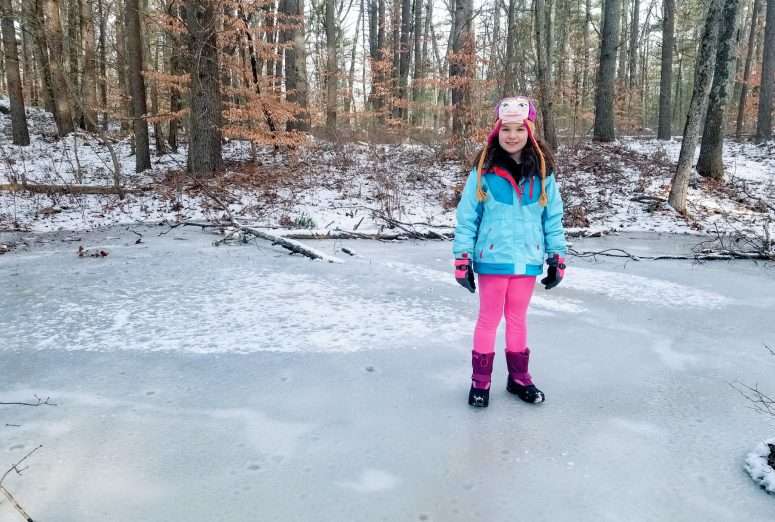 As I’ve mentioned before getting Ce outside early is the key to having at least the first half of a good day with her. 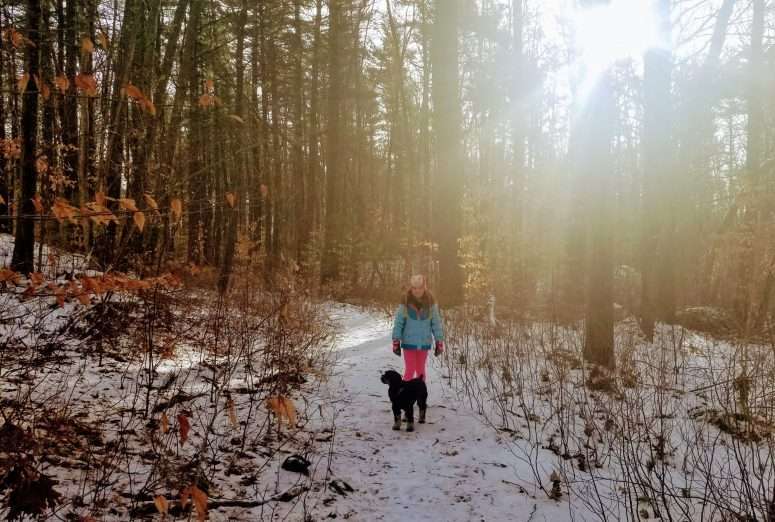 Dash was ecstatic that the snow had melted enough for us to get back on his happy trails. He ate his body weight in snow. 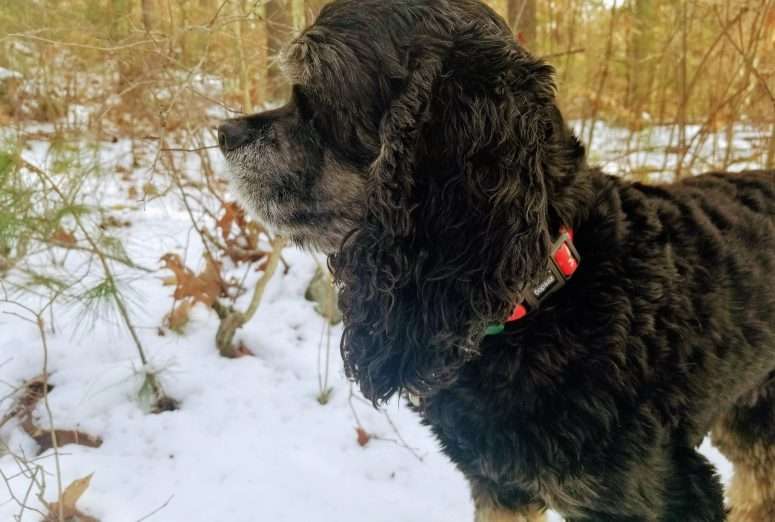 Because a quiet Saturday without an agenda or activities isn’t a challenge, we decided to up the difficulty level and head to Ikea.

We passed another parenting milestone. Cece is now too big for Smaland. They took pity on us today, but no more 30 kid-free minutes wandering the maze of Swedish modernism with free lattes. 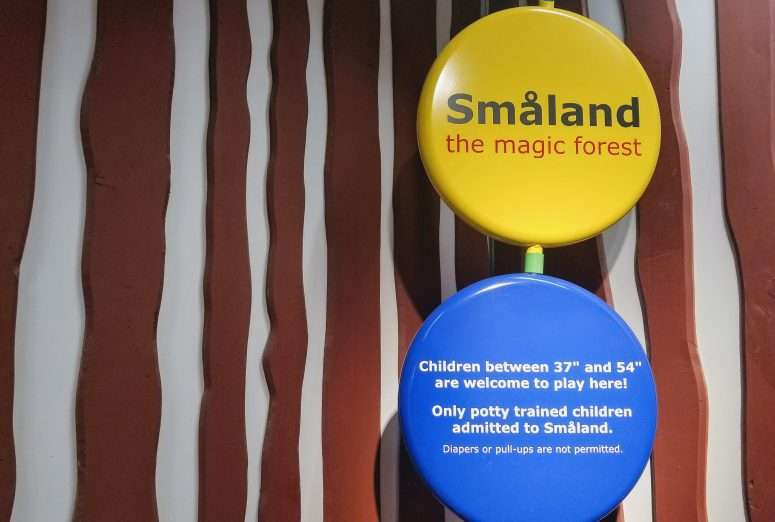 Ally was excited to find an entire bin full of her [edit: second] favorite stuffed animal. 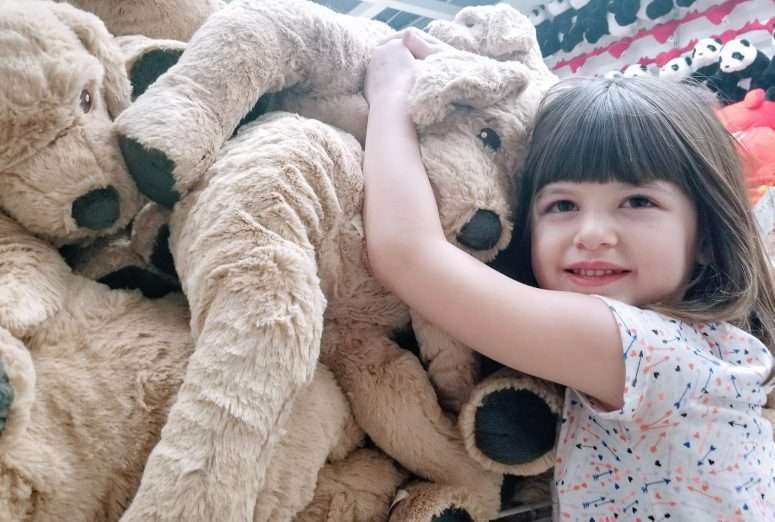 It’s hard to beat the Ikea prices for food. $22 for lunch for four with drink refills. Not shown is Ally’s mac ‘n cheese and yogurt. They liked the cornbread but not as much as Dad’s magic cornbread. I still got it. 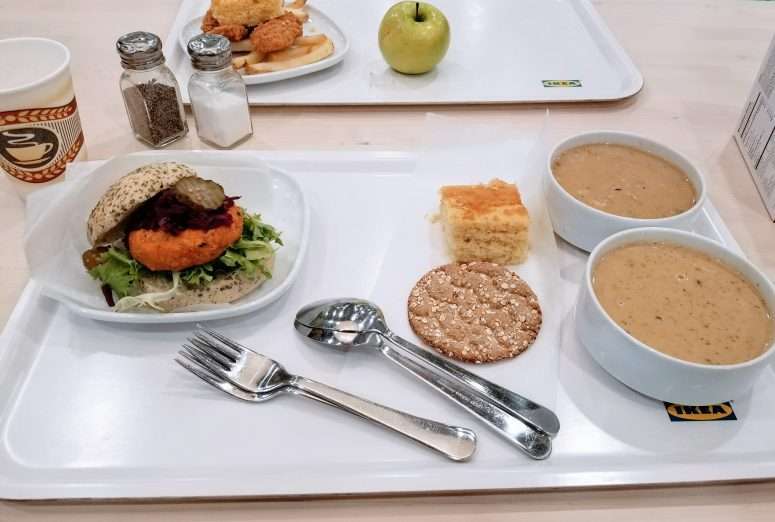 After finding the exit and getting home, it was strongly suggested that it was warm enough for the girls to play outside for awhile. 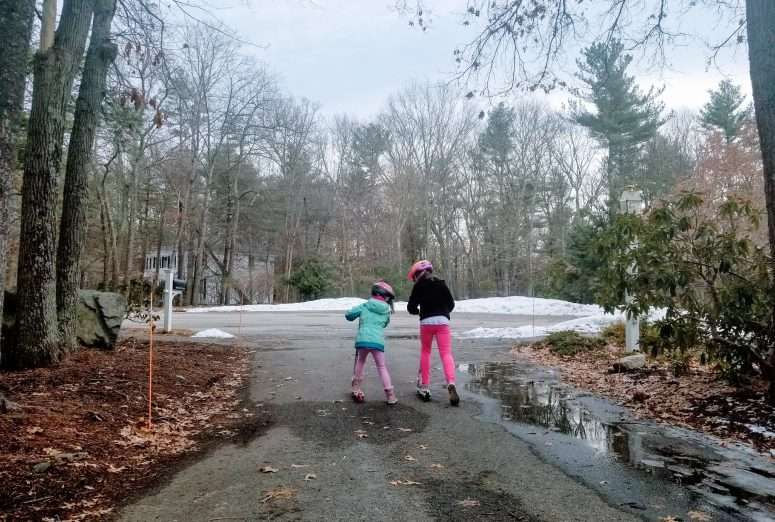 It was pretty soggy out so once they exhausted the driveway activates, we headed to the pool. 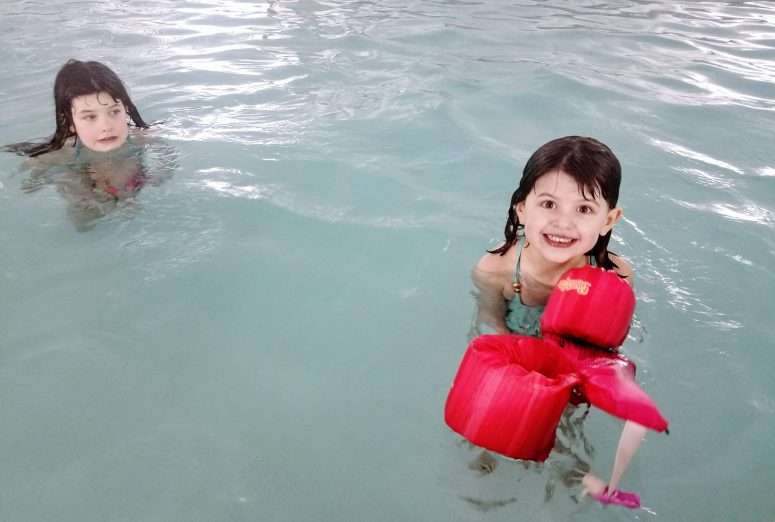 The pool did it’s job and the girls were wiped out by the time we got home. 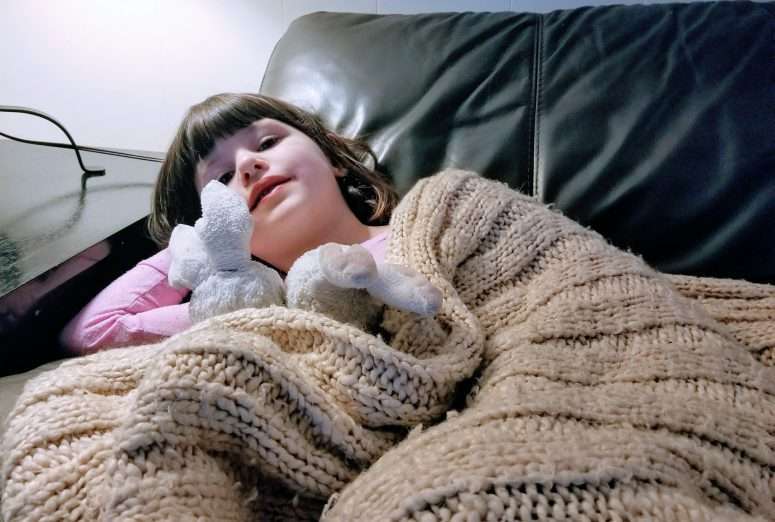 Ally really wanted to make a pie today so she could realistically put on a version of The Waitress at home and have pie for dessert, but we ran out of gas (we’re making a brownie pie tomorrow). She had to settle for some warm cookies. Tough life. 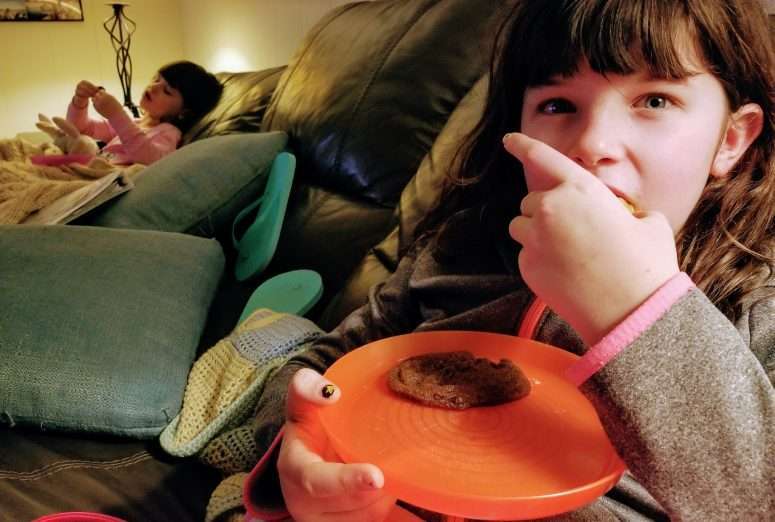 Later, after the girls are in bed, I grabbed the laptop to write this post, made some tea and went looking for one of those cookies. I only found crumbs. Someone, maybe both of them, conspired to sneak some extra cookies. I definitely do not have to be compassionate or understanding about about cookie theft. I want my cookie!