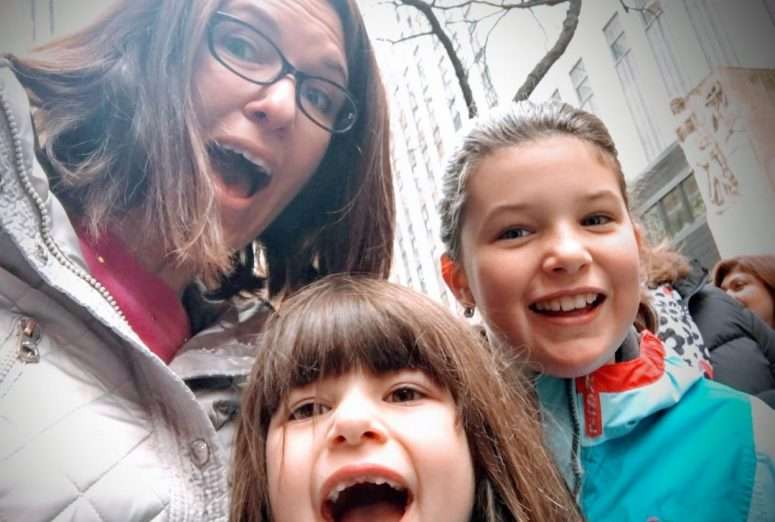 One book that has unexpectedly stuck with me this year is Shonda Rhimes’ memoir Year of Yes. I’m fairly certain I’m not the target audience. I’m not a woman. I’m not black. I’m not a mother. I’ve never even seen a minute of her shows. But I am a bit introverted and increasingly my default position for a great night is reading a book on the couch. Maybe I’d let the dog in the room with me. And a bottle of wine.

So when Michelle suggested, not just adding a side trip to DC, but also to NYC during our drive to see family over Thanksgiving, my knee jerk reaction was a hardy hell no. Nothing could be further from my comfy couch than Midtown Manhattan during Thanksgiving week. It all sounded like a recipe for a stress and anxiety milkshake.

We start the day in a hotel just outside New York. Thanks to blackout curtains we made it past sunrise before the girls started vibrating around the room with excitement. 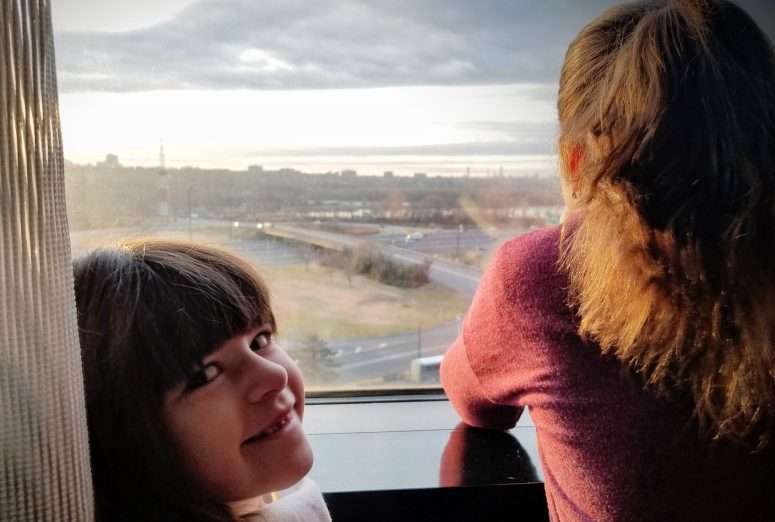 After a quick breakfast at the hotel, we taught the girls about the value and frugality of public transportation with a ride on a NJ transit bus. This ended up working out great. Nine bucks for all of us. 20 minutes to Times Square. 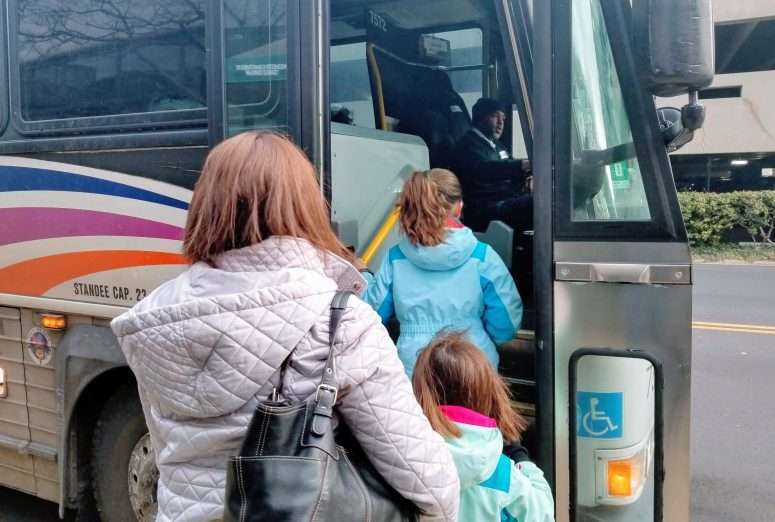 We then walked through Times Square with the girls calling out every musical billboard or theatre marquee they could find. 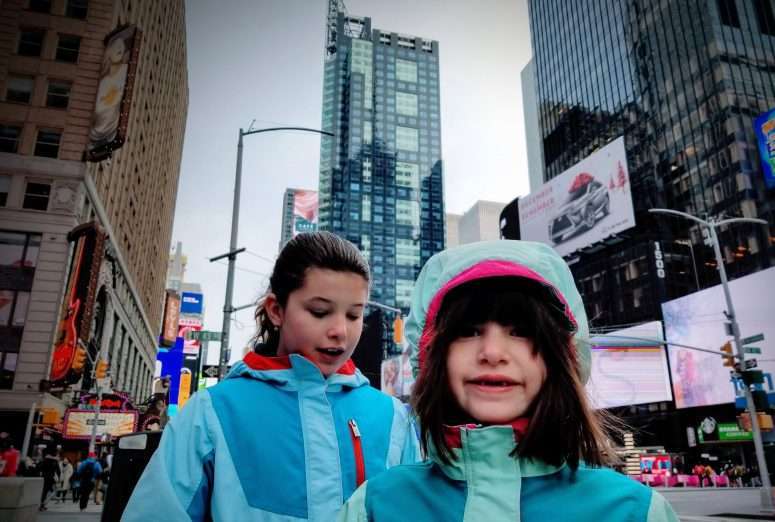 Ally was quite chuffed to see her “name” on a prominent purple sign. 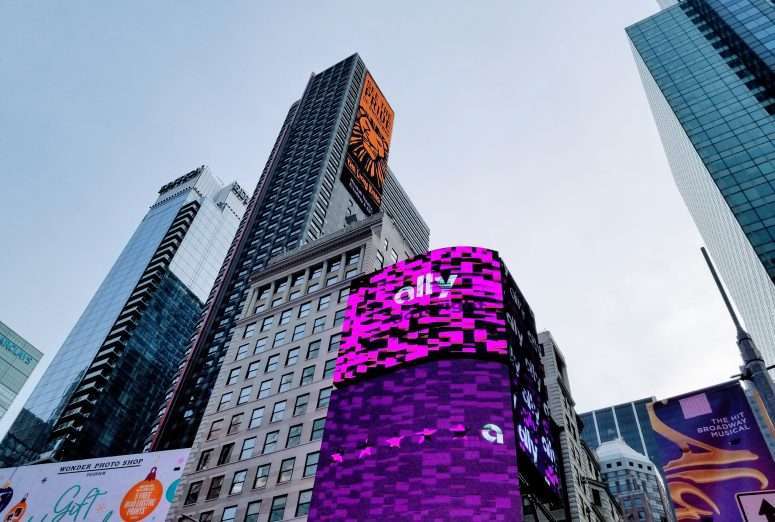 Sadly, our actual presence did not improve our chances in the Ham lottery. 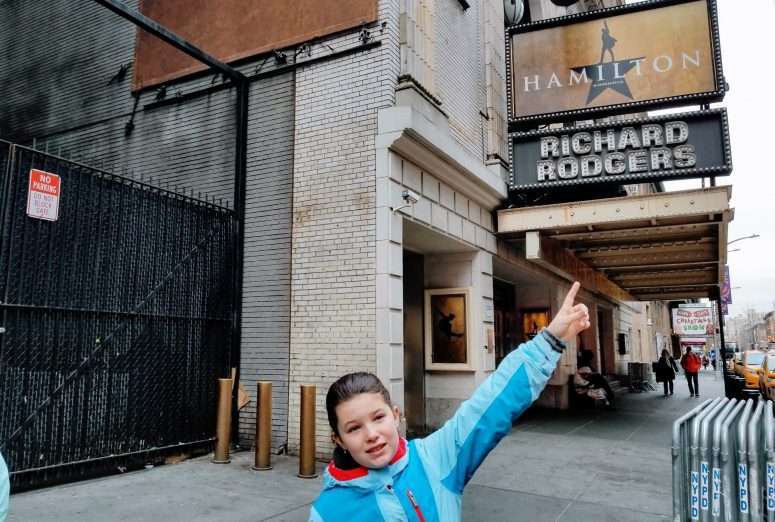 The Rockefeller Tree was decorated and ready but not lit up yet. 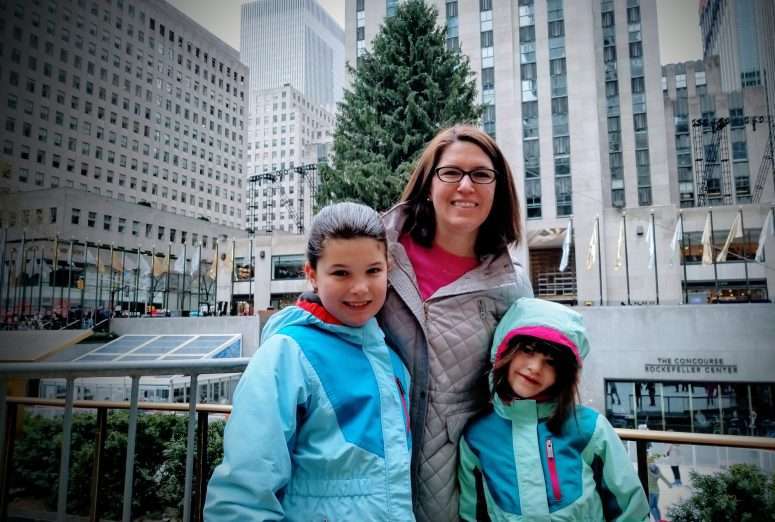 Now, the girls knew we were stopping in the city, but they didn’t know that Michelle had been stalking discount ticket website for weeks and had scored some seats to the Rockettes Christmas show. They were flagging a bit after walking around for a couple hours, but this news boosted them back up.

Despite being told to meet someone in a red shirt on a certain street corner at a certain time, it all worked out and the tickets were legit. 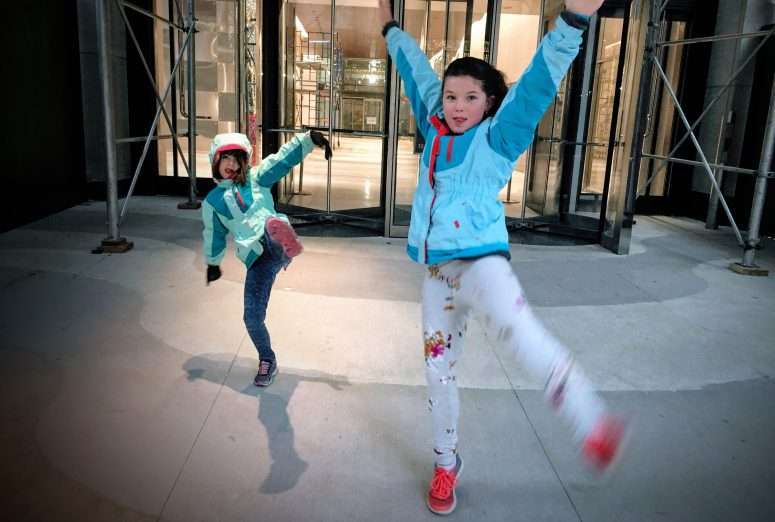 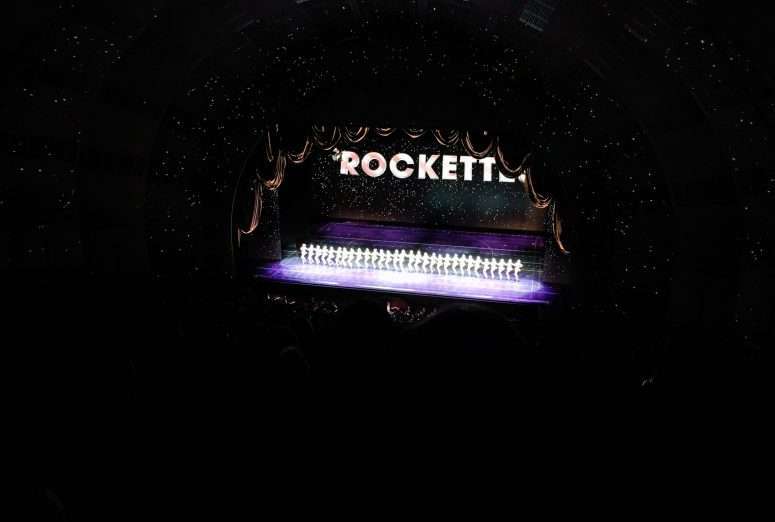 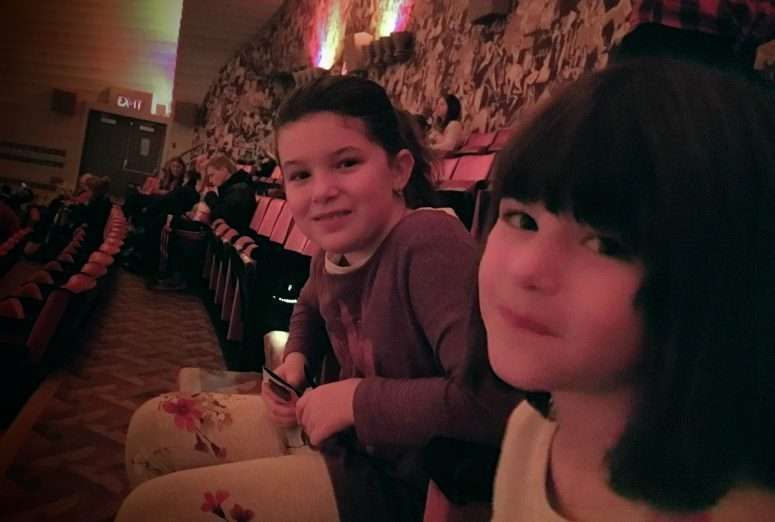 We didn’t plan this next part, but we went by the Gershwin to check out the Wicked lottery and found out if we split up, we could see the matinee show without dipping into the kid’s 529 plans too much. 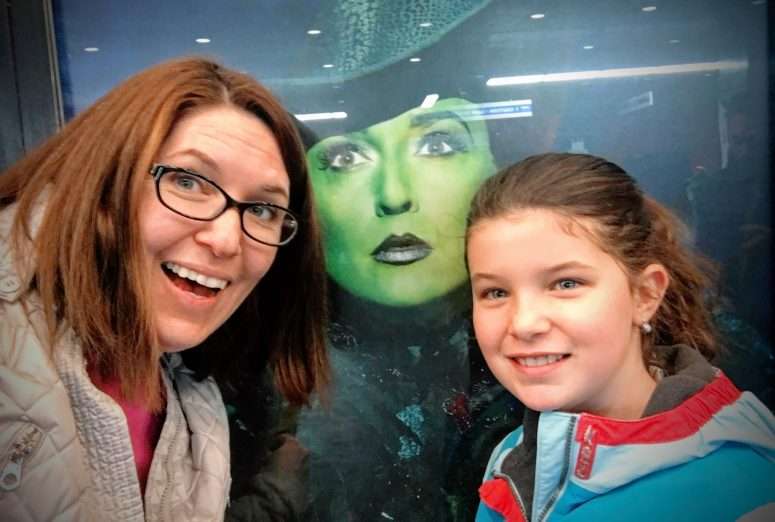 They were pretty happy about this early Christmas present, even if it turned out the understudies were doing the Saturday shows. Only our kids would be moved to tears by this news. 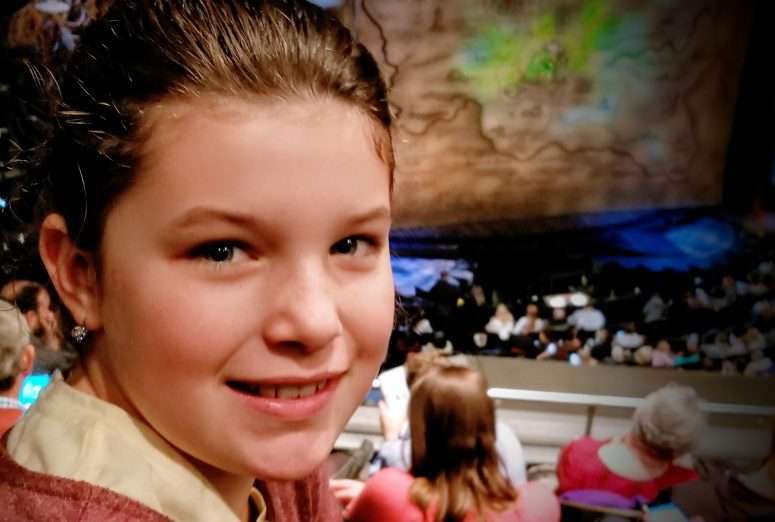 You can’t go into NYC and not get pizza. Unfortunately, we were in Midtown and it was starting to rain, so options were limited. After a quick google, we ended up at nearby Don Antonio’s. It ended up being a solid choice. 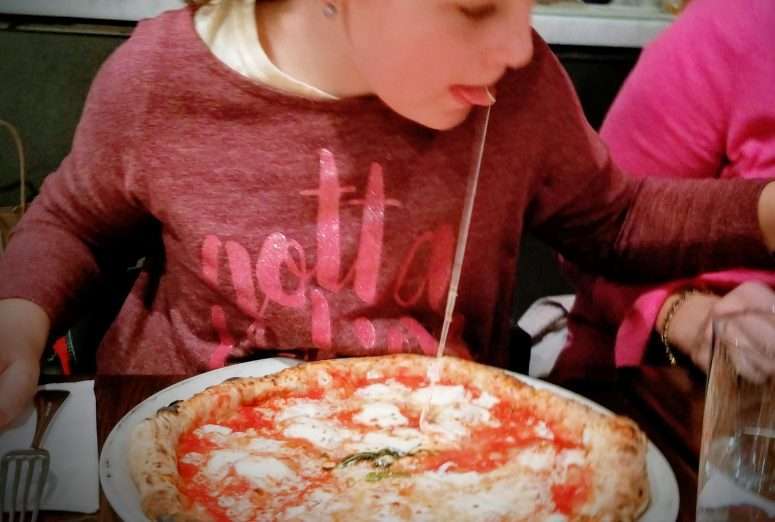 Ally gave their arancini a big thumbs up. 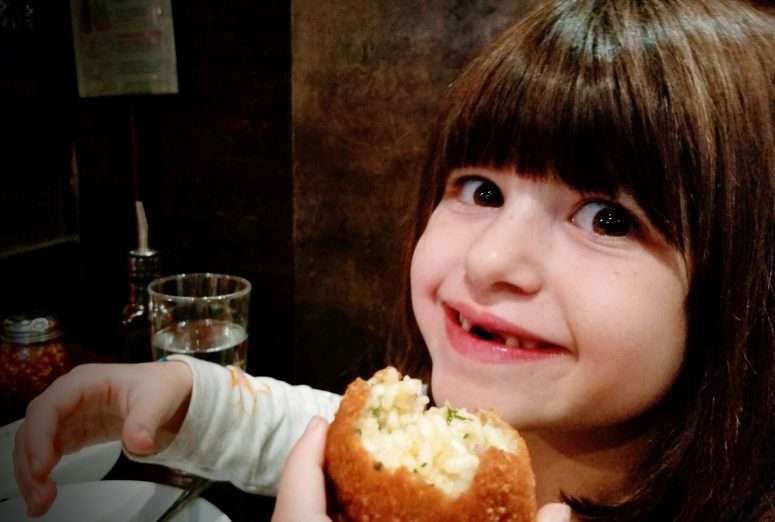 Our luck continued and the rain mostly held off as we walked around the holiday market at Bryant Park. 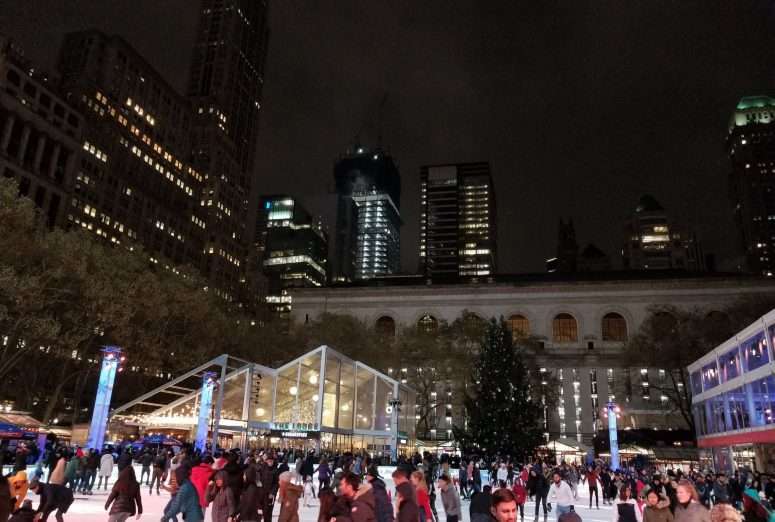 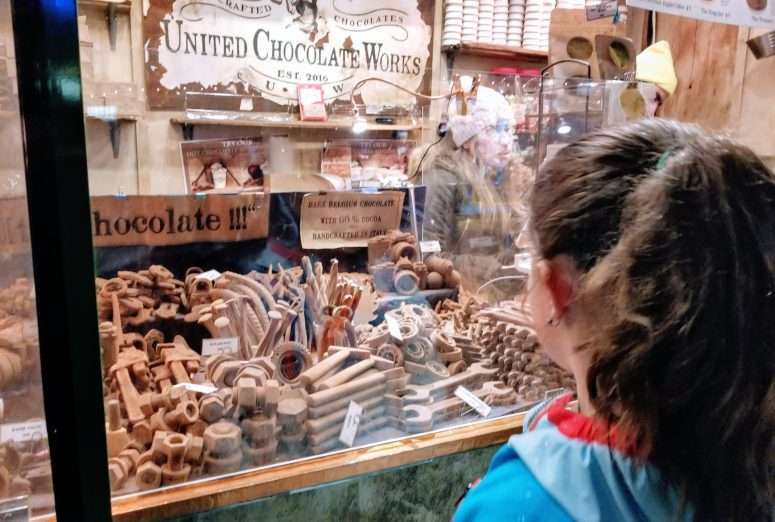 We finished up an epic New York day with some chocolate and s’more crepes. Funny, I don’t usually have a problem saying yes to dessert. 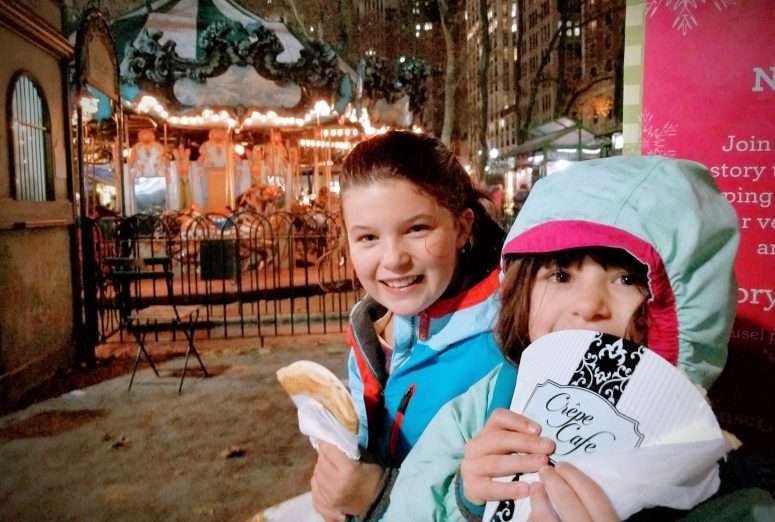 And wearing our souvenirs to bed. 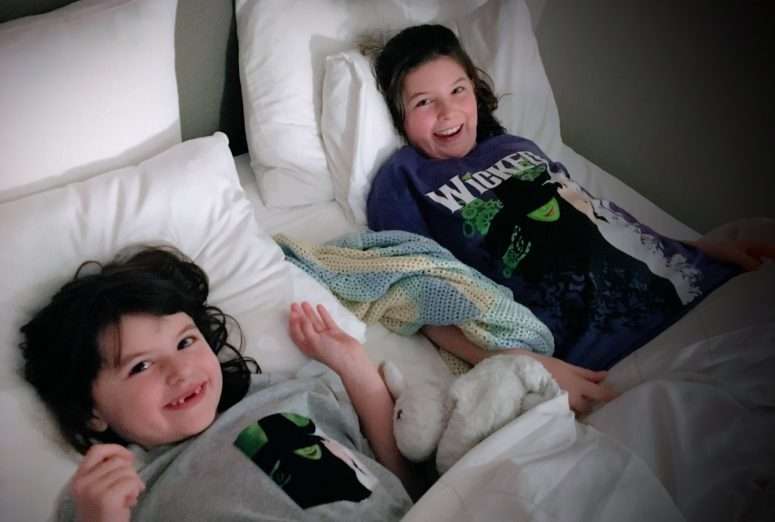 I don’t think you need to say yes to everyone and everything until you are completely spent. But I’m going to try to keep saying yes to opportunities, new experiences, new ideas to show the girls that getting outside your couch comfort zone might lead to failure but it might also lead to cheap matinee tickets. Either way, I’ll say yes and figure it out later.