We went to see Elf with friends (Happy Birthday, Ty!) at a rented movie theater this week. It was a great time and spoiled ever going to a theater with strangers again. It also meant that Ally had plenty of sugar after 7 p.m. Her appetite for candy and desserts has been well documented here. She was a hyper Christmas pixie by the time we made it home. Her contagious silliness infected her sister. It was time for bed but they only had mischief on their minds. Giggling, fighting, laughing. Thank god the glitter was out of reach.

It was late. I was ready to pack it in. This was definitely not time for a rumpus. I was teetering on the verge of shutting it down by parental decree (i.e., yelling) and yet…a question popped into my mind instead: who has it better?

Nobody. Nobody has it as good as your own family. It’s a mad, mad world out there right now. Hang on tight to those dear to you. Lean into that craziness. Try to enjoy it.

We started on the couch by watching the Elf episode of The Holiday Movies That Made Us. Favorite fact? They had no permits to shoot in NYC and almost all the footage and extras were just random people. Also, everyone was terrified of James Caan. 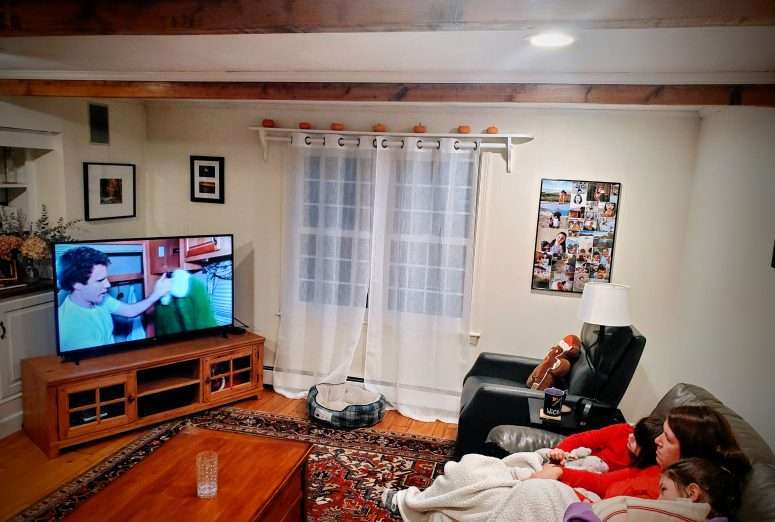 Ally took a shift as the short order cook at Cecilia’s breakfast diner. 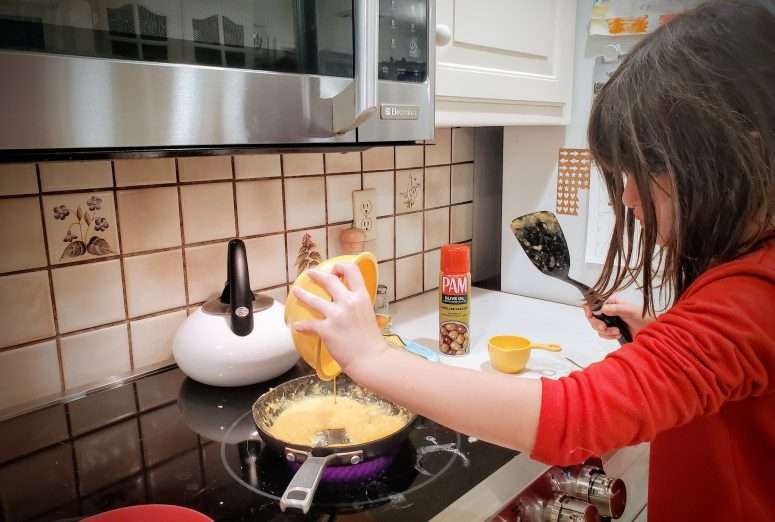 We grabbed a tree (almost literally) on Friday night before the snow. For locals, Rocky’s in Millis has any tree for $30 bucks. 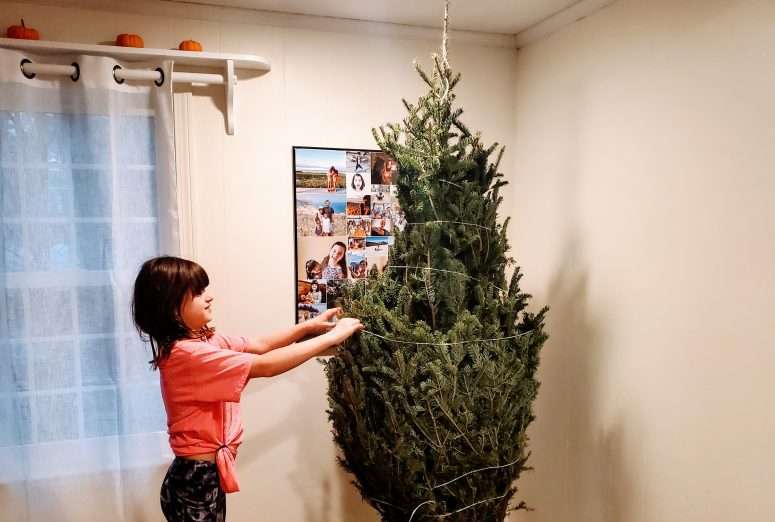 Ally’s actual birthday is today so we really lucked out with having the party a few weeks ago. Balloon garland and nor’easters don’t really mix. But we still wanted to make the weekend day special so Michelle took her out shopping. 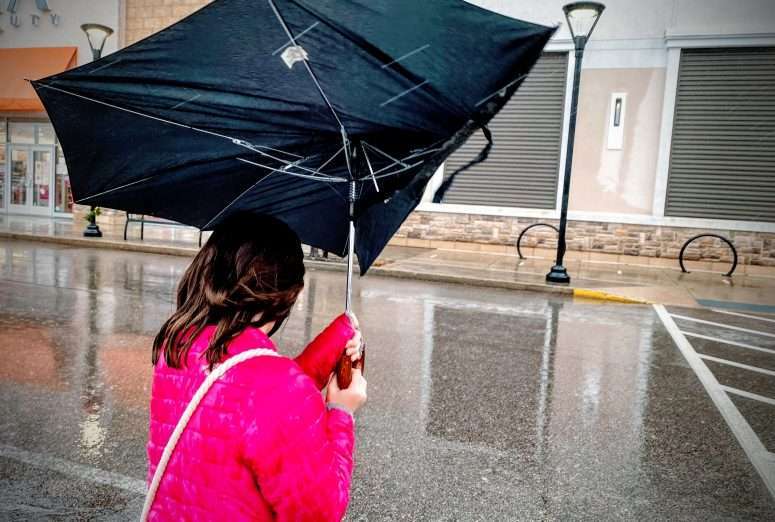 Clearly the girls have been watching too much Say Yes to the Dress. She really wanted to go and try on fancy dresses. The staff at David’s Bridal were super-nice (or really bored) and very accommodating. 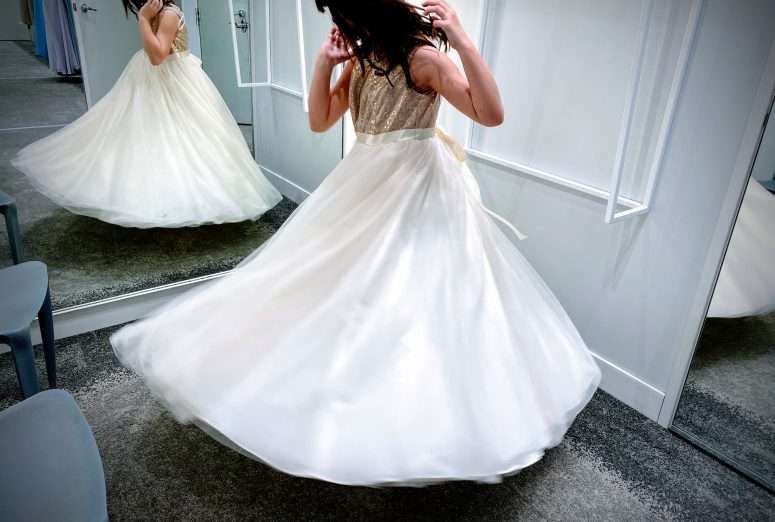 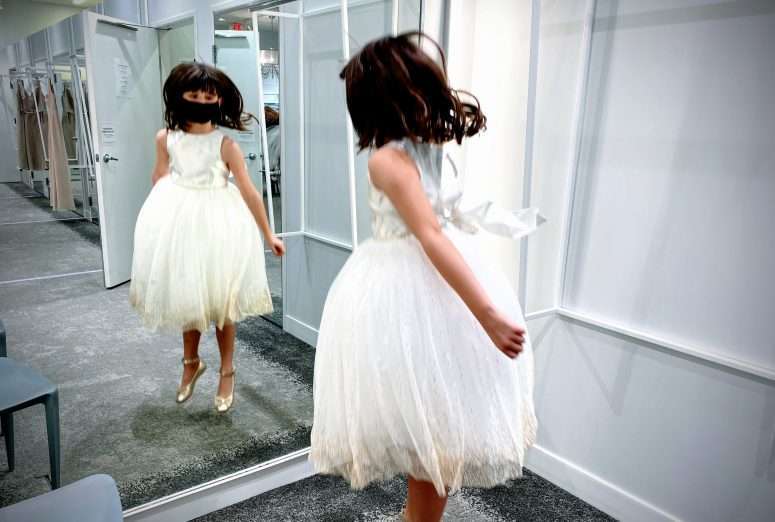 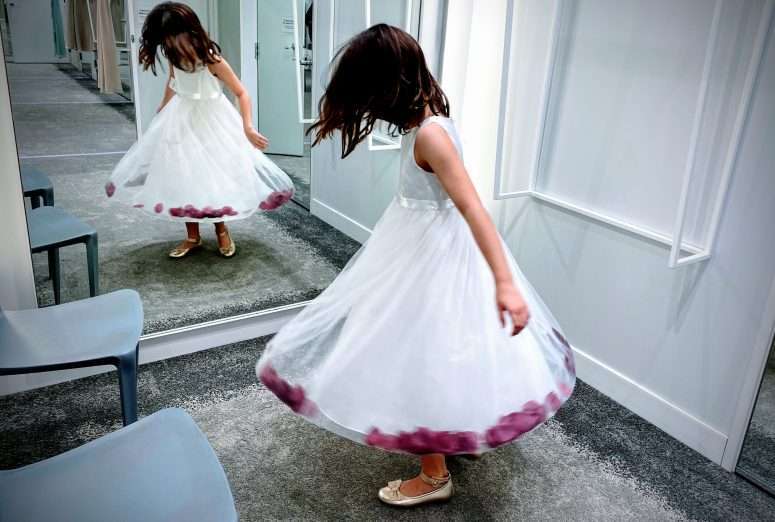 What to pair with dress shopping? How about a trip to Petco to pet a bunch of puppies. Best day ever! 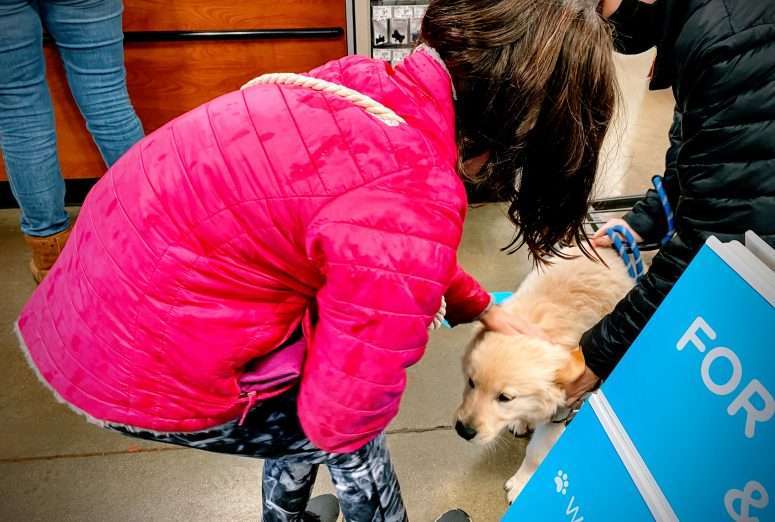 While Ally was away, Cecilia finished up her sister birthday preparations, including a giant pop-up card and a very choreographed opening five minutes to the birthday morning. 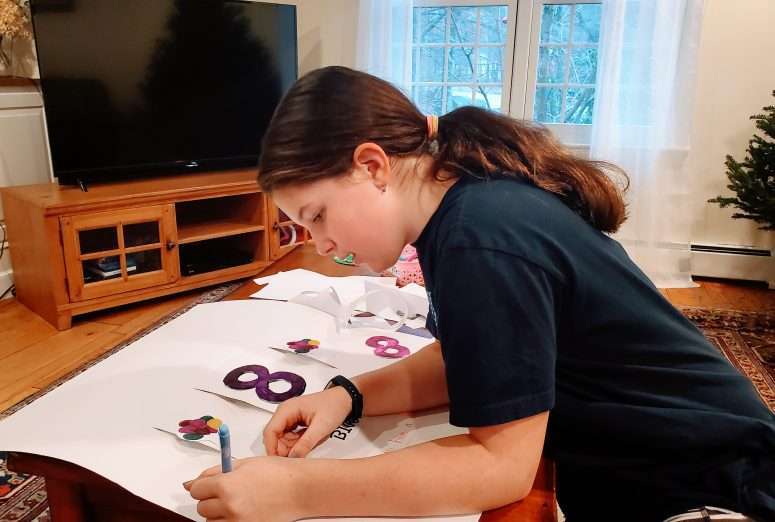 According to Ally, our Christmas Nutcrackers have their own YouTube channel where they post videos when we are sleeping: Nutty Crackers. Hit the button to subscribe.

Sometimes listening in while they narrate their play is better than any podcast. 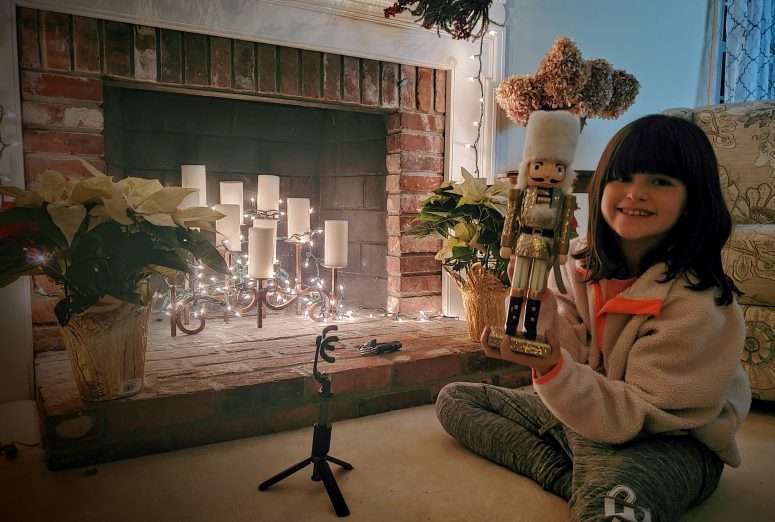 By mid-afternoon, both girls were getting a little stir crazy and no amount of soothing Nutcracker or Dan Fogelberg Christmas ballads could chill them out.

Every year, Michelle manages to sneak that song on and professes how much she enjoys it. Every year, I try to resist the urge to shove an icicle light in my ear.

Except for the late breaking, post-bridge sax solo. We both agree that is some legit smooth jazz. 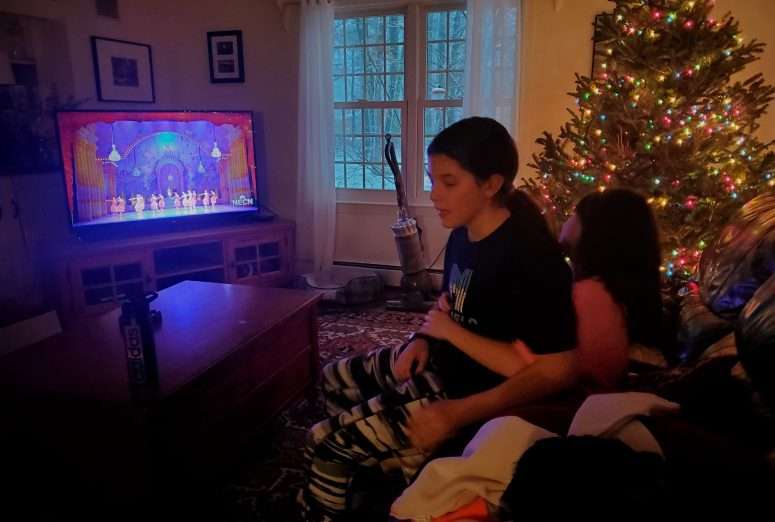 We had to break out the big guns: the edible Christmas arts and crafts project: painted holiday marshmallows. It’s a marshmallow world. 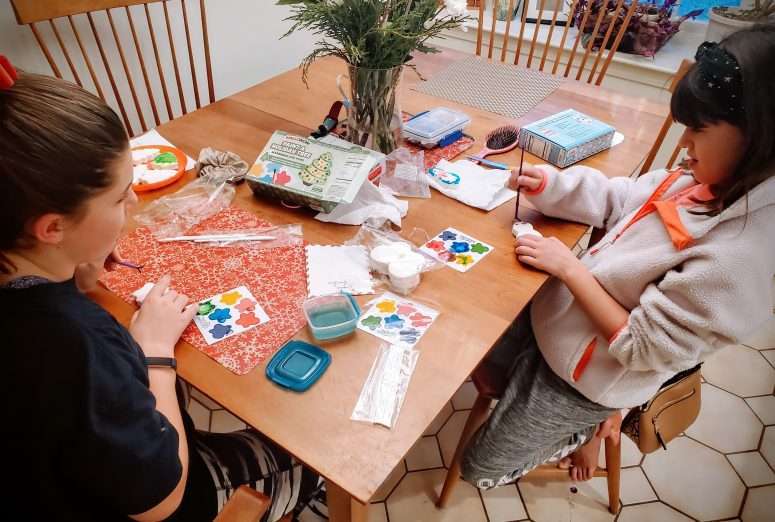 While they painted marshmallows, I made the cake for tomorrow’s birthday dinner (four layers, classic yellow cake, strawberry frosting). Tip: if you want to make the layers even, it’s easiest to weigh the batter you put in each pan. 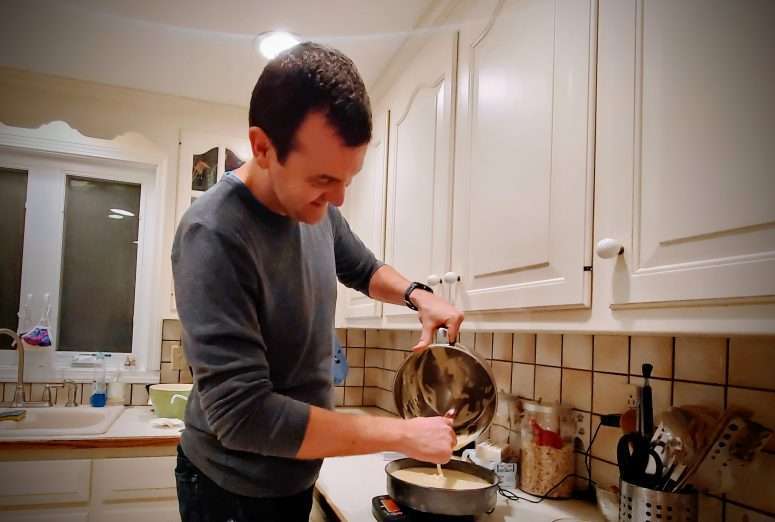 It was a takeout night. Or that was the plan. About two minutes after this picture was taken the entire plaza lost power and we had to scramble to find some cash to pay for dinner. 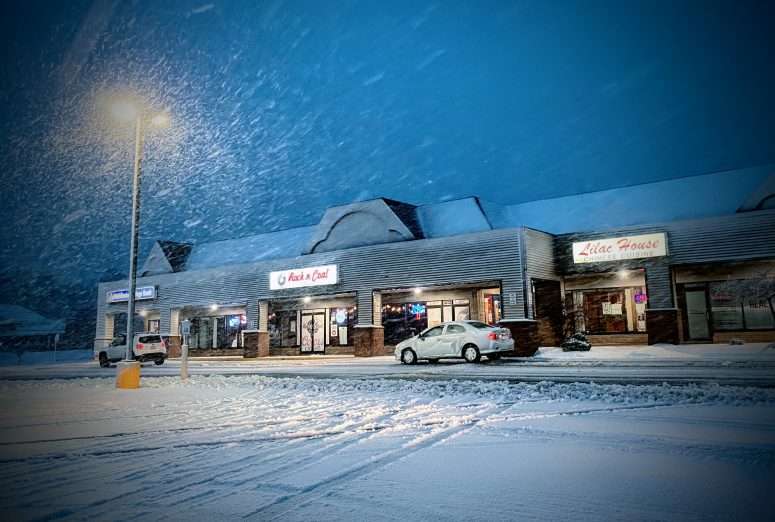 Despite some reservations, the sight unseen $30 tree looked quite nice when it opened up. 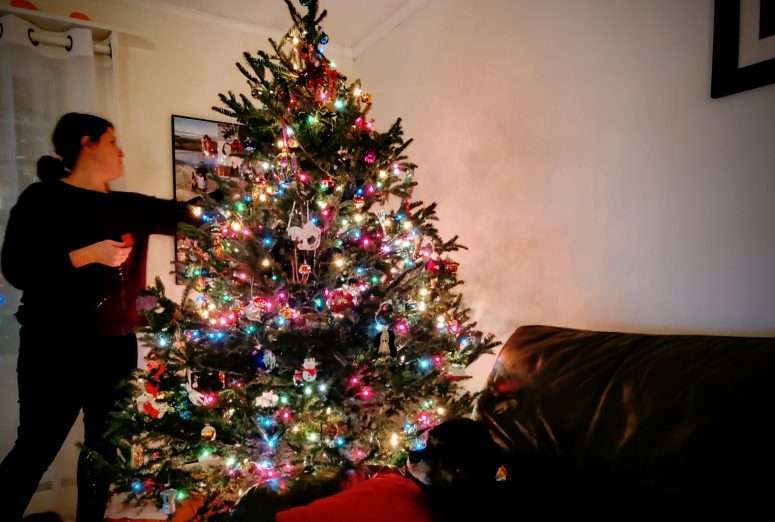 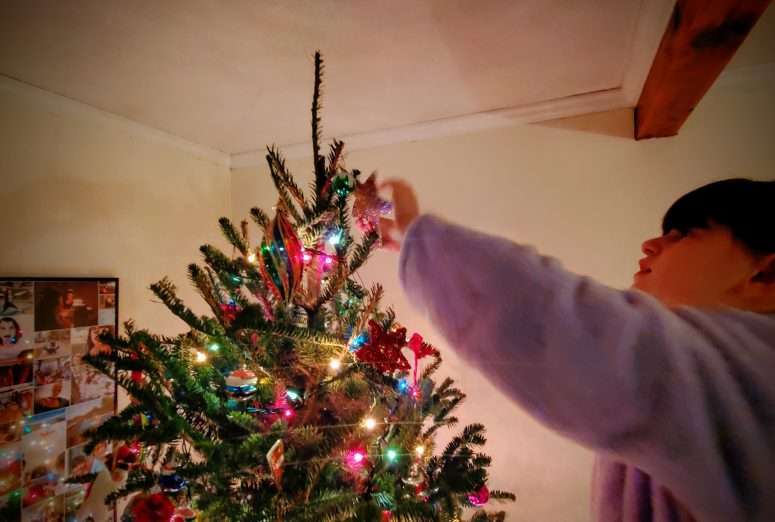 We finished a snowy Saturday with a fire and watching Godmothered, a typical, but silly and very family friendly Disney movie. Girls loved it. 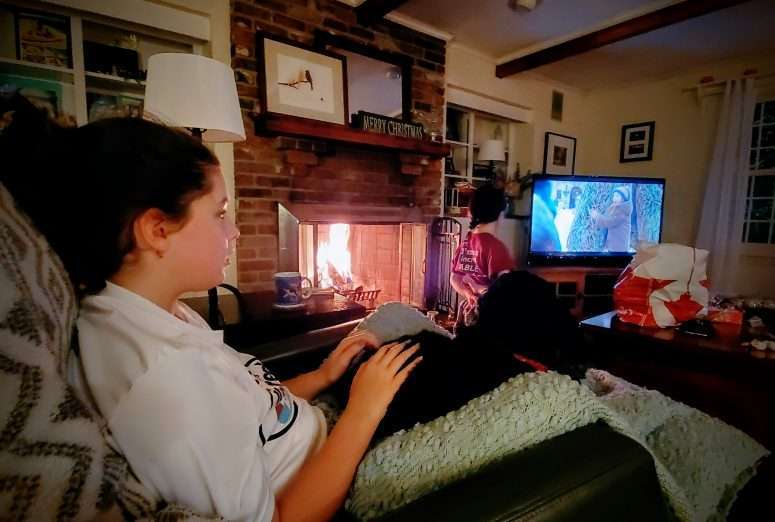