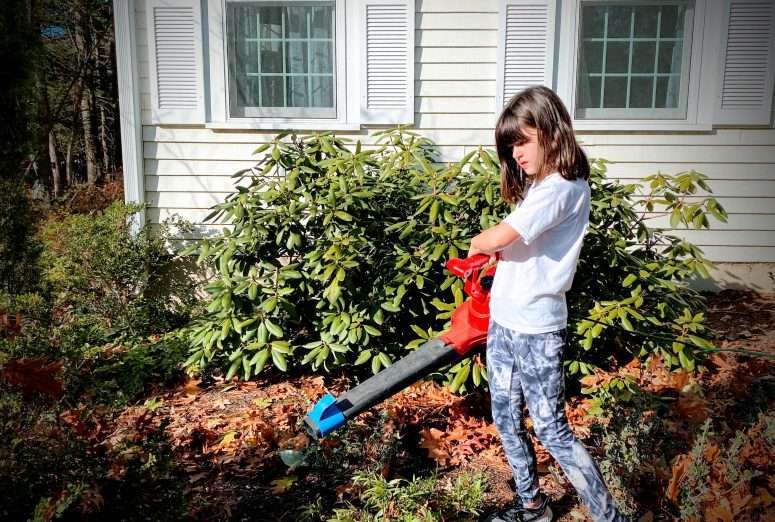 Sun is out. Feel like I’m coming out of a strange fugue state. Could be all the leaf blower fumes or it could be…you know. If I ever get this posted, it will represent perhaps my biggest accomplishment this week. There was a lot of vacuuming and anxiety baking but little else this week. We tried to balance keeping the kids informed about what was happening and keeping our own sanity. It was like trying to tap dance on a single piece of glitter. It was exhausting.

The kids had a lot of questions. We did our best to answer them and not just let Alexa do the parenting. She is great at pretending to be ignorant and deflecting. It was interesting to try to distill down an answer and a viewpoint on a complex topic to something that both kids could understand. I think the debates could have been a lot more useful if they were held in front of a cafeteria of elementary school kids and the candidates had to do the same thing.

Enough politics, on to the couch and transfer station news.

Keen-eyed couch watchers will notice a new piece of furniture this week. The couch remains but we are trying some alternative seating options.

Mom had control of the remote and we started the day watching Lorraine Bracco/Jennifer Melfi try to renovate one of those $1 Italian houses. It did make us miss Sicily. 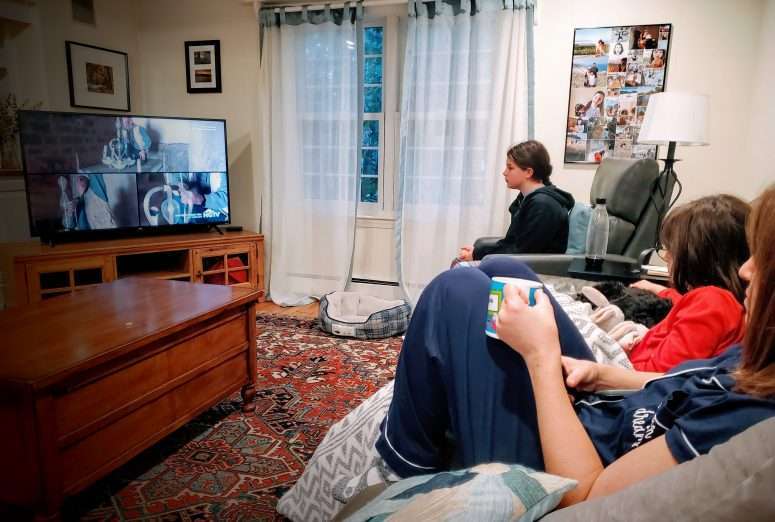 Hats and gloves last week, shorts and t-shirts this week. We keep running. 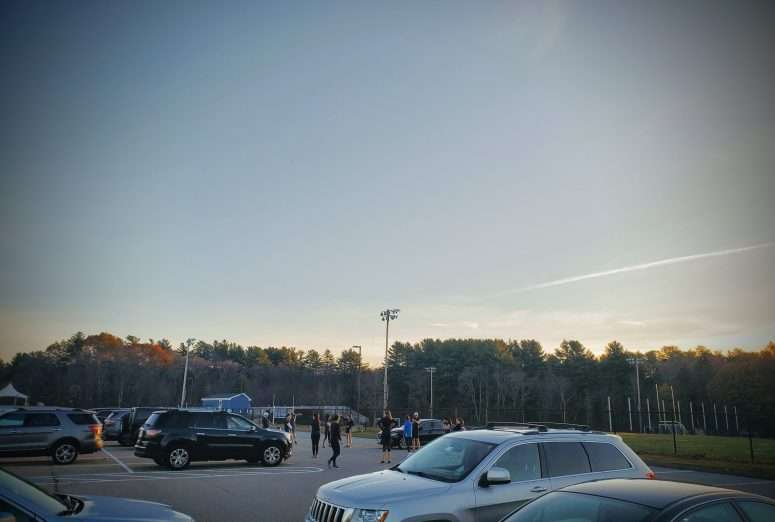 Another week, another shot at making perfect eggs. Learned this week: the 100 folds in a chef’s toque are for the 100 different ways to prepare eggs. 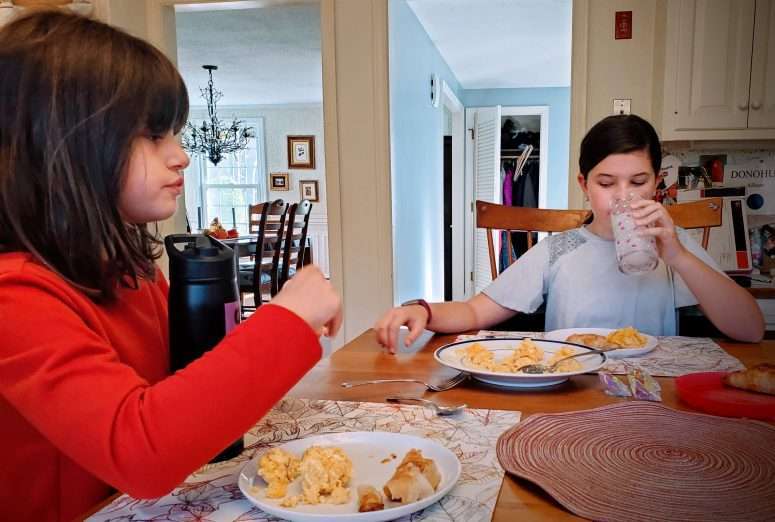 We are two weeks in and I’m already developing nervous PTSD tics when I hear the opening chords to Carole of the Bells. 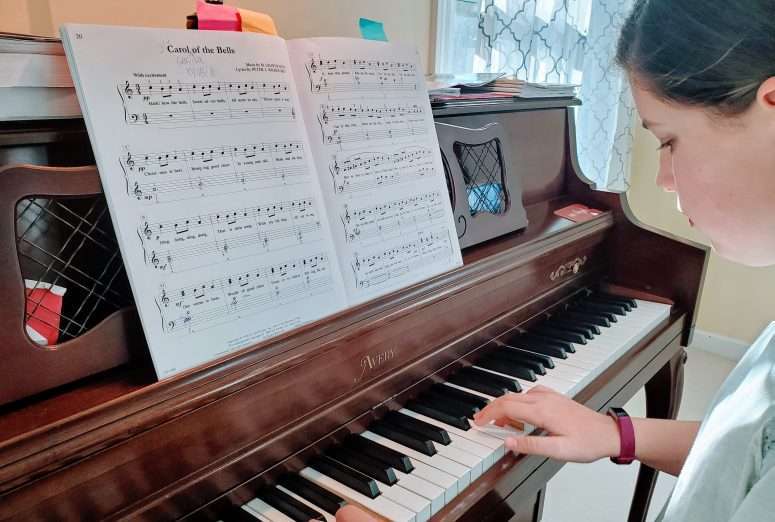 The big goal with the nice weather was to make a big dent in the leaves. Michelle was fired up. I had to remind her that there was a town noise ordnance that prevented her from firing up the Stihl before 7:30 a.m.

The kids are getting a little to be Tom Sawyer-ed into helping but we did our best to get 30 minutes of help out of them. I spent most of the morning trying to figure out how to stretch the ladder to the second floor gutters without risking maxing out our health insurance claims. 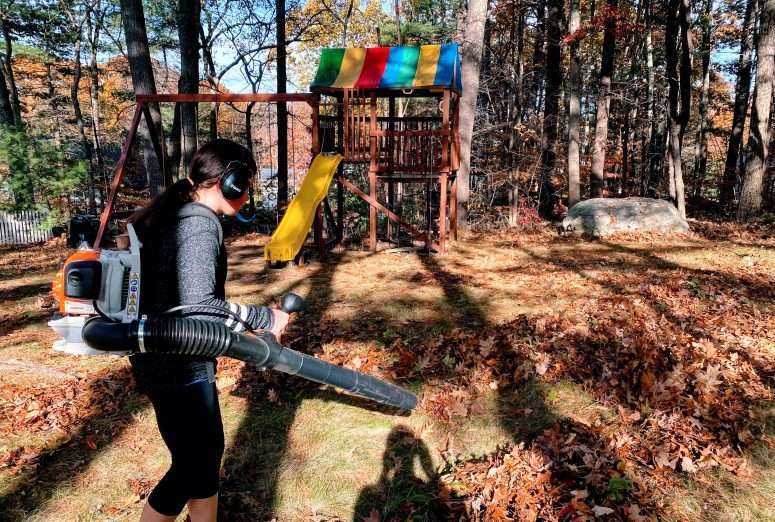 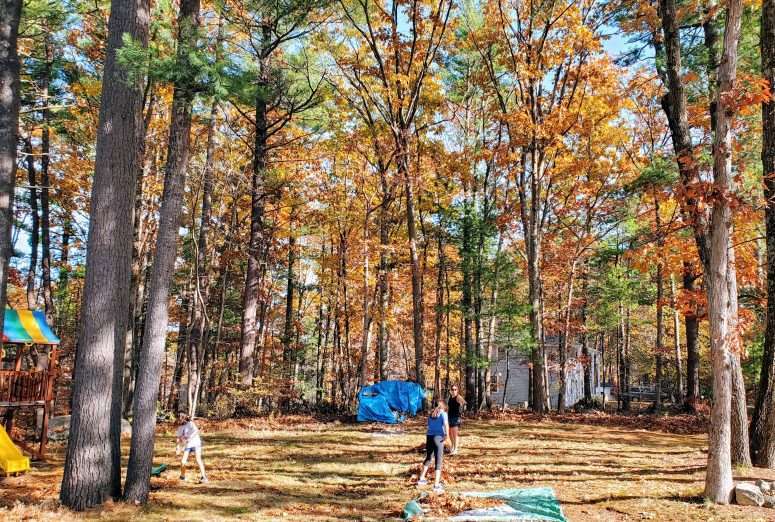 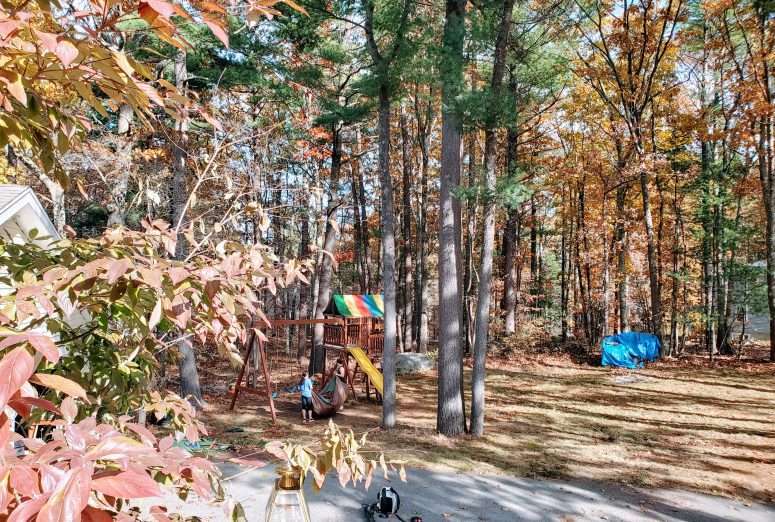 Sadly, we did hit up the transfer station but it gets awkward trying to take new and artistic photos when there is a line of people waiting. It’s enough of a challenge to fancy park and dump the garbage without also getting strange and impatient looks while zooming in on the gargoyle.

One excellent recent find that was destined for the transfer station was Ally’s new bike. With a little polish and some new brakes, she now had gears and can keep up with her sister going up and down the local hills. And we didn’t have to shell out for a bike that wouldn’t fit her in another 18 months. 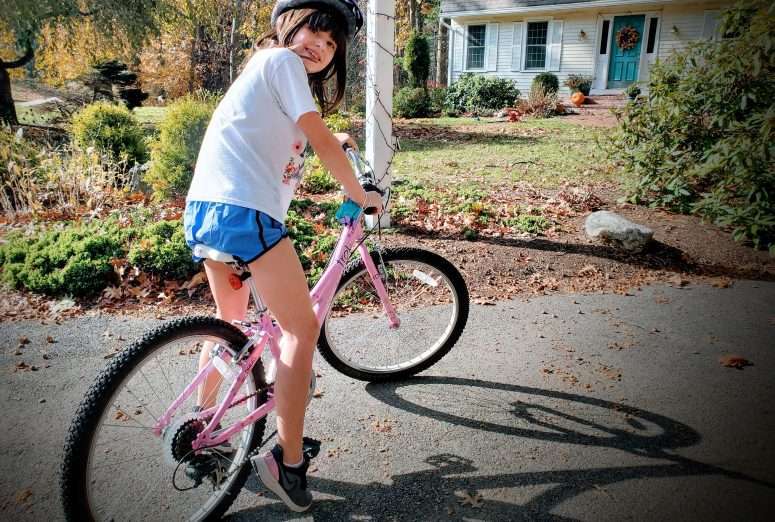 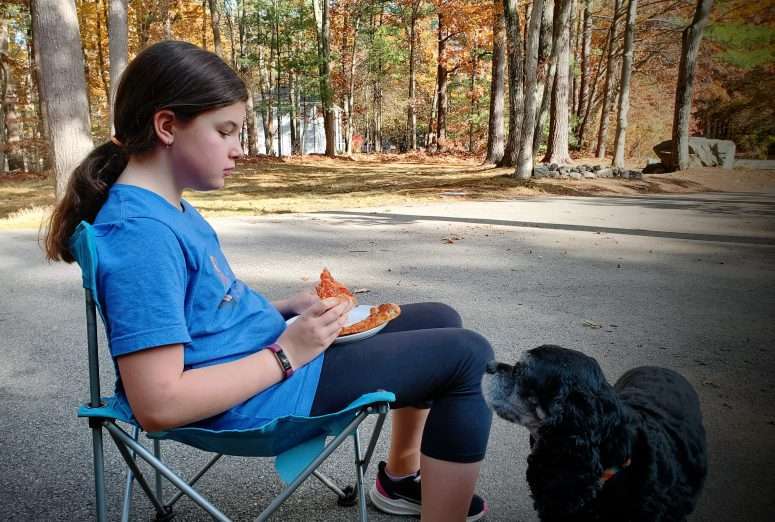 Good news. The library has added a new and larger air fryer along with some cookbooks to their unusual items stockpile. 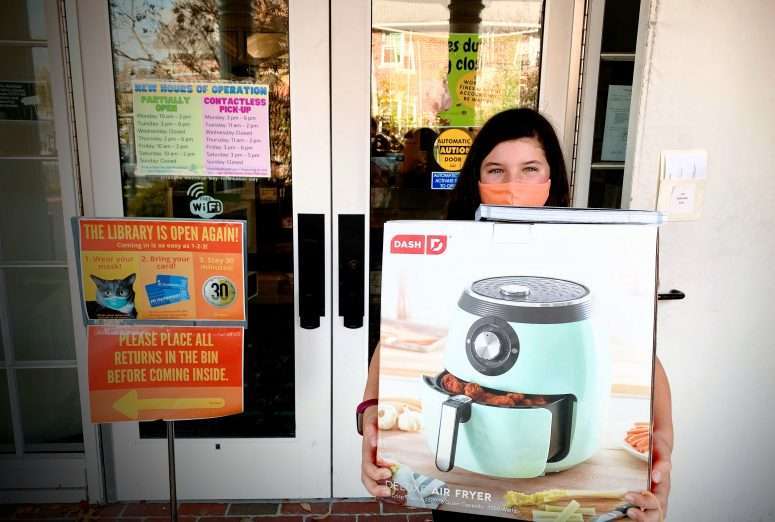 It was too nice of a day to pass up the local beer garden, especially one with wood fired pizza.

Sometimes Michelle’s social personality comes out in the kids at inopportune times (for me). As we waited to order a pizza, Ally started commenting on and critiquing the pizzaiolo’s technique compared to what the chef taught her in Italy. I got embarrassed. She got a job offer. 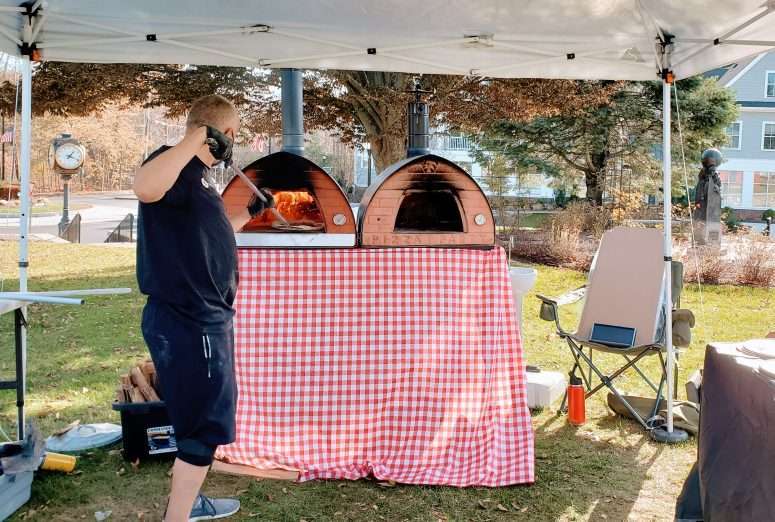 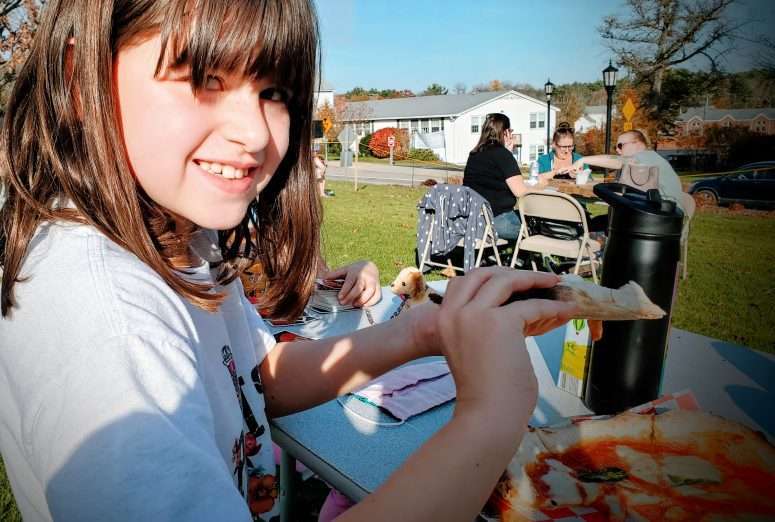 We put the air fryer to work immediately. It excels at onion rings. Ally also treated us to a ten minute review of the different varietals of dino-shaped chicken nuggets. As far as I understand, she prefers the fresh blue package to the frozen yellow or orange box ones. 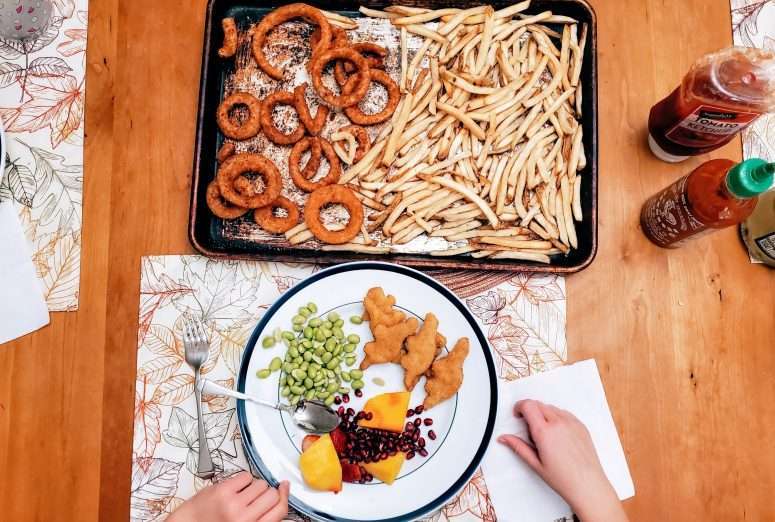 We finished the day with pajamas before seven and some T.Swift. There was a lot more dancing and a lot less questions than previous nights. I was good with that. 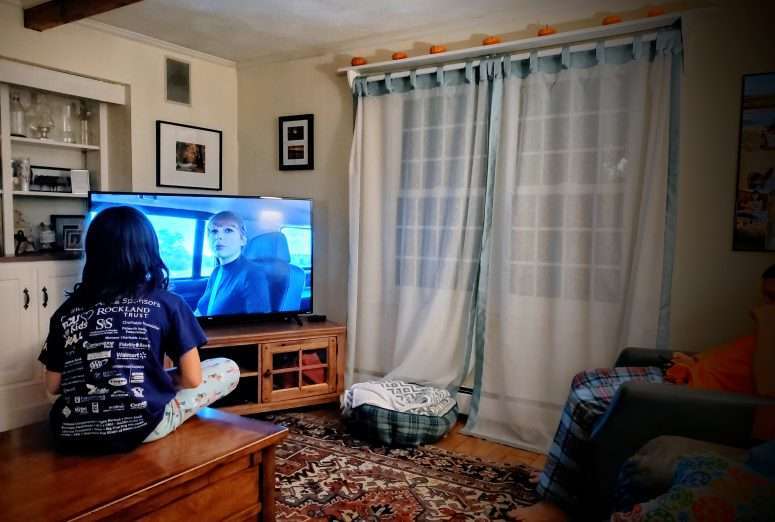