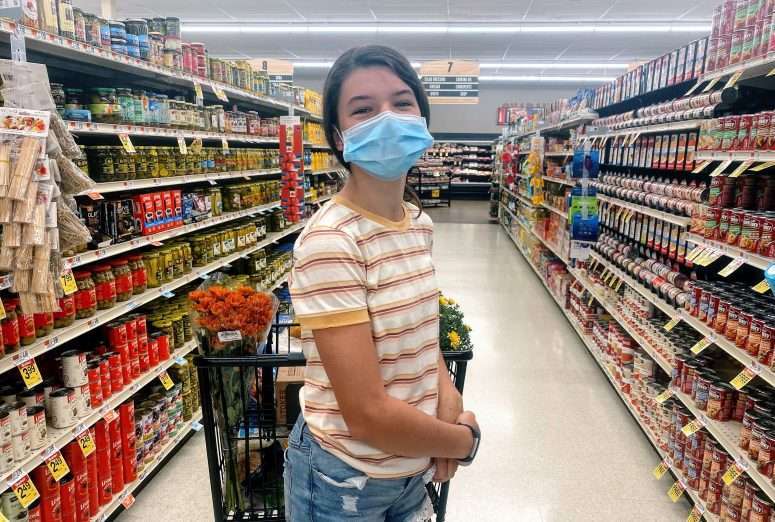 School might be off to a stuttering, there is another day off next Thursday, but the middle schoolers are jumping right into the deep end with 9/11. Cecilia interviewed Michelle and I for an assignment about our day in NY twenty years ago. Cecilia has asked occasional questions before in the past. Ally was more aware this year and she seemed completely baffled by much of what happened. Aren’t we all.

I still don’t like to think of that day. Too raw. Too many horrible memories. Too many close what-if’s.

For the girls, for Ally, I’m afraid it was a bit of a rude awakening that the world is not made of glitter and choreographed dance numbers. There are mean, selfish, cruel and downright evil people out there in the world, too.

But not everyone. Not all people. I know there were many heroic and selfless acts that day, too. Part of parenting is not letting our past experiences and cynicism bleed into our kids. We can’t coddle them from reality. We need to prepare them, but also remind them that the vast majority of people are good. That most people will help if they can.

Friday night, after a long and affecting day of footage, memories, and questions, we watched Come From Away together. Maybe a little coddling isn’t so bad. Maybe the world is a little better with choreographed song and dance numbers.

After three consecutive weekends of traveling, Michelle made the executive decision that we were staying home and “doing nothing” this Saturday. Keep that edict in mind as you scroll through the pictures from yesterday. My wife’s version of doing nothing and mine are radically different.

Michelle started our Saturday of nothing with a sunrise run.

With our new health insurance we get access to Peloton’s digital app. Michelle discovered that there is a Broadway run workout. If you see a woman swerving off the sidewalk in mid-torch ballad, please don’t run her over. 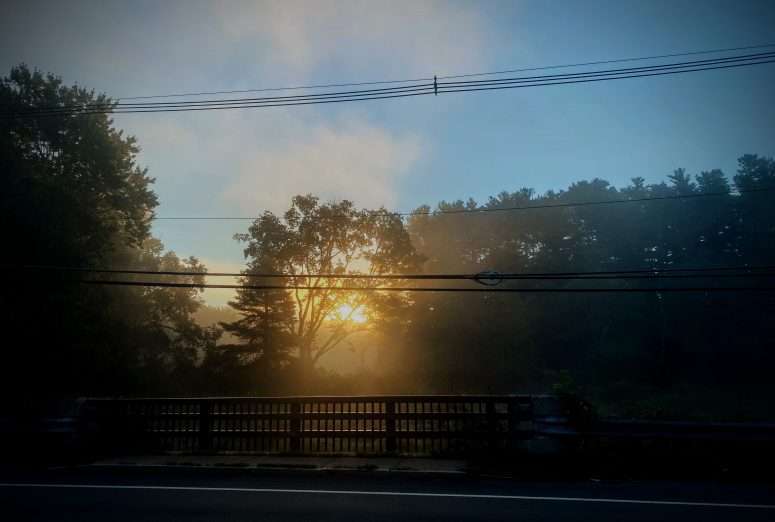 For her cool down, she took Dash on a woods walk. If he looks confused, he’s not used to moving this early in the morning. 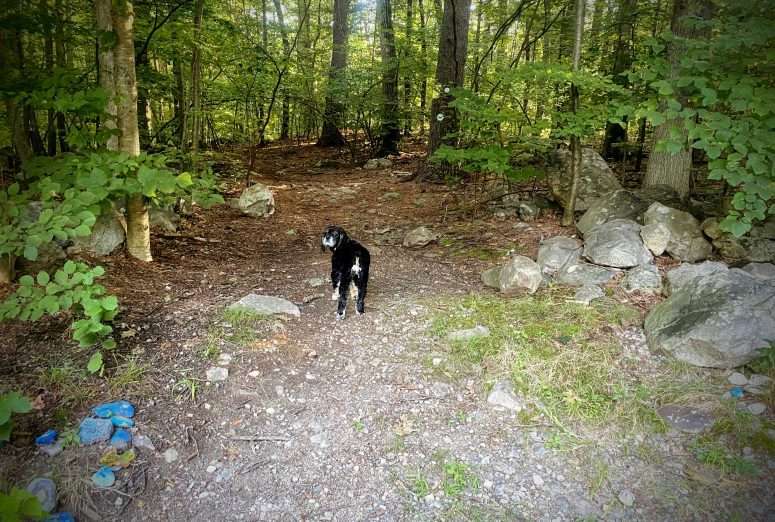 Not pictured, a “quick” arms and shoulder toning workout before she decided that the freezer could use a clean out and scrub down. 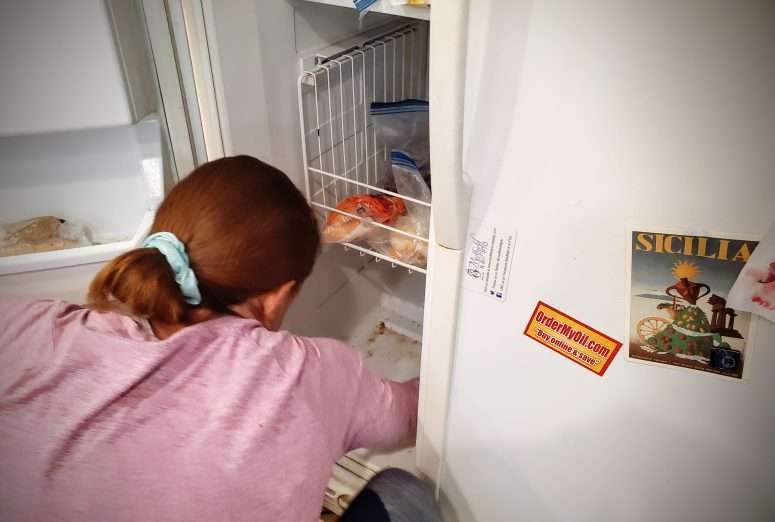 You know once she gets cleaning on a Saturday morning, there is only one logical conclusion.

It’s never too early to teach the girls the proper Transfer station form. Swing from the shoulders, not the arms. 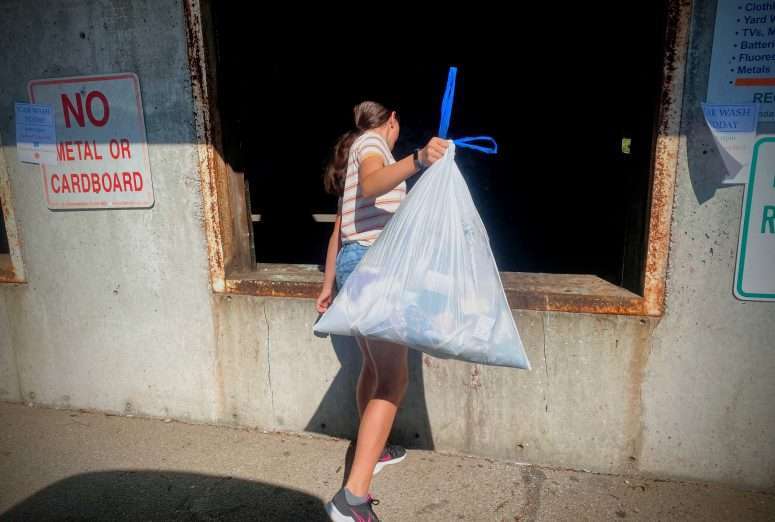 And meanwhile, if you are out and about, you might as well do some grocery shopping.

They recently renovated our normal grocery store and moved a lot of things around. It’s driving Michelle crazy. 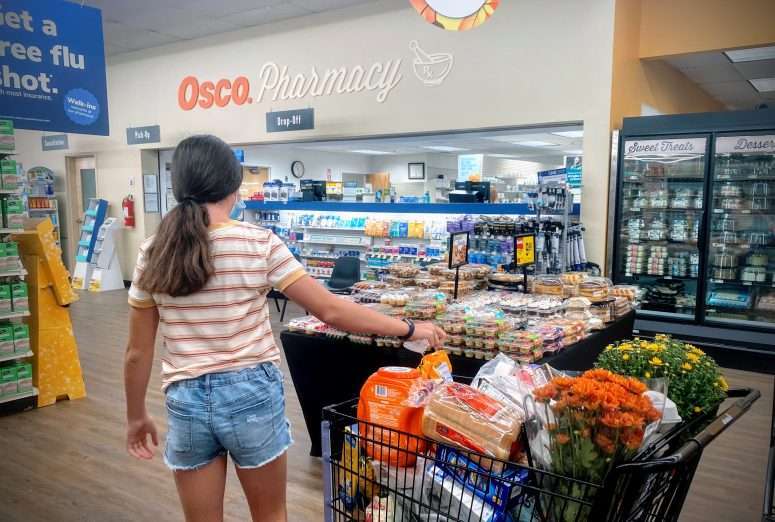 Keep in mind, it is now just past 9:30 in the morning. Back at the house, Ally was… still in the process of waking up. 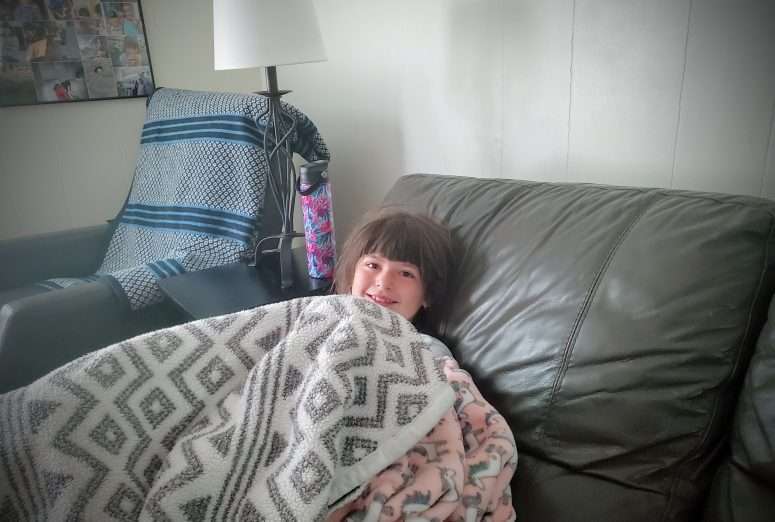 I was eventually able to coax her off the couch.

“Dad, something’s wrong with the piano. It sounds weird.”

“Nothing’s wrong with the piano. We just finally got it tuned for the first time in 18 months.” 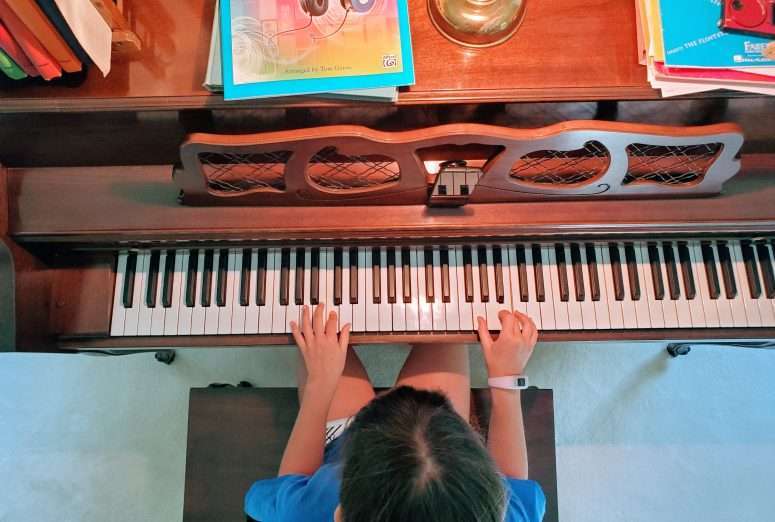 Back from the store, Michelle hand cranked out some zoodles in preparation for dinner while making the girls some lunch.

Ally will never get tired of re-enacting Lady and the Tramp. Actually, neither will Chelle. 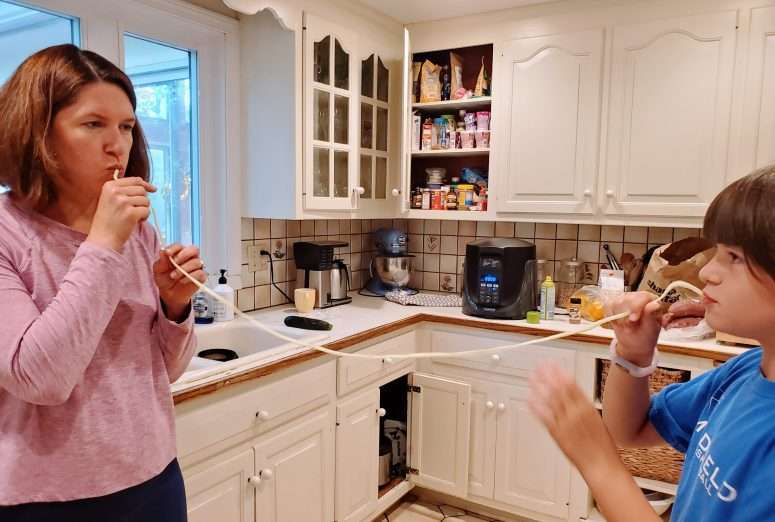 Shifting her focus from indoors to outdoors, Michelle decided the front beds needed some work. 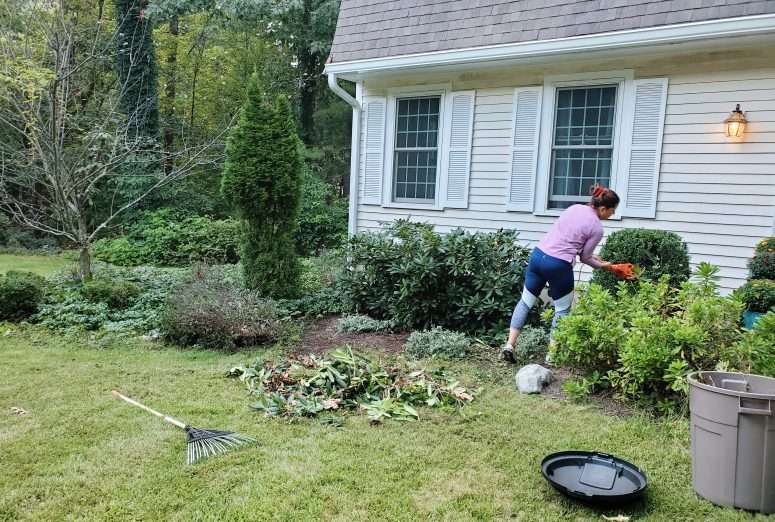 Not content with only re-enacting a Disney classic, she also decided to perform a critical scene from her favorite sitcom, Parks and Rec (Leslie Knope could be based on Michelle), and fell into a pit. 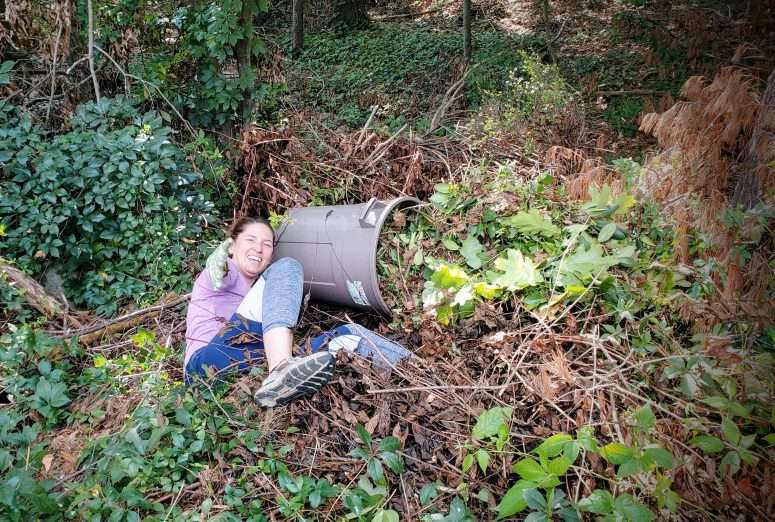 Playing real-life Pitfall didn’t slow her down, but eventually it became too dark to safely use power tools outdoors and she came in for a tiny beer. 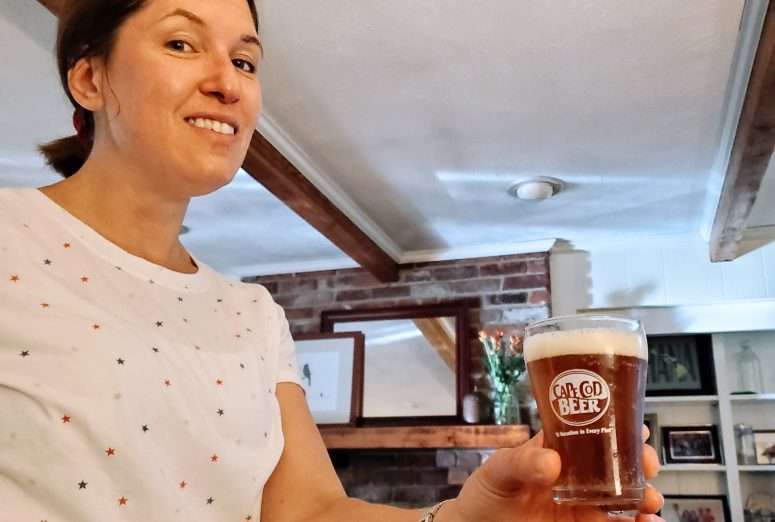 The girls caught up with Grandmother. Dash was still recovering from his early morning walk. 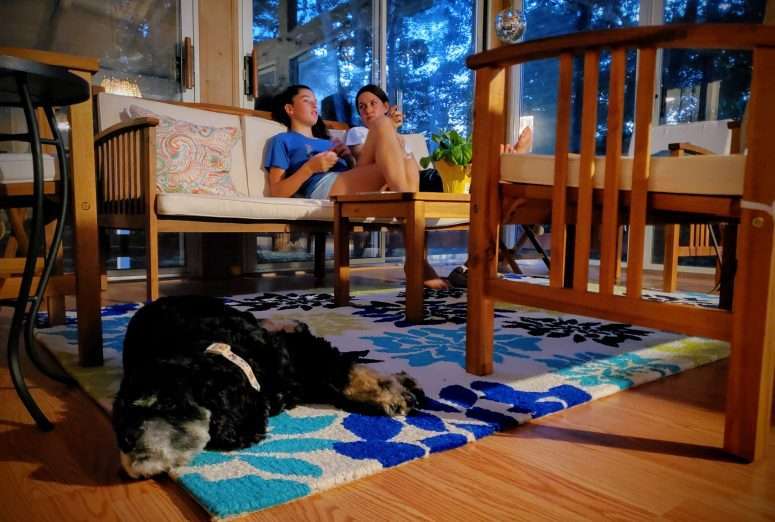 Big milestone this week, at least from Ally’s perspective. After years of trying, she finally figured out how to use the whip cream can solo. She will happily give anyone that asks a demo. 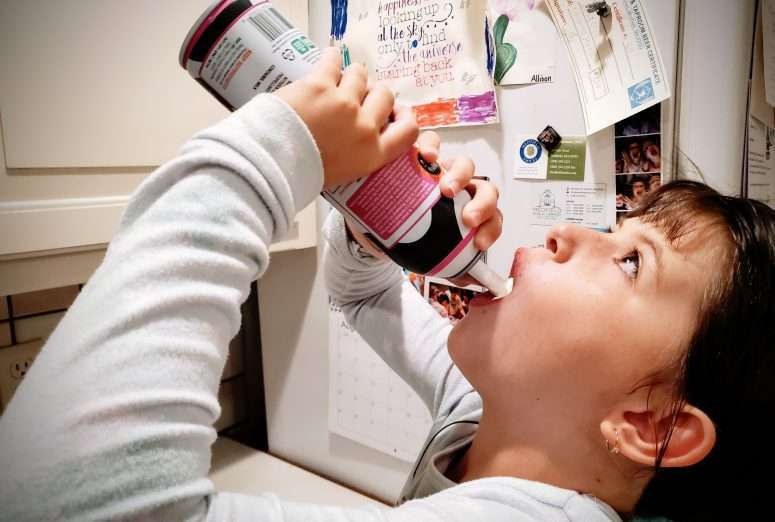 Did I forget to mention that at some point during the day, Michelle also made an apple cobbler? Not a bad way to end a lazy Saturday. 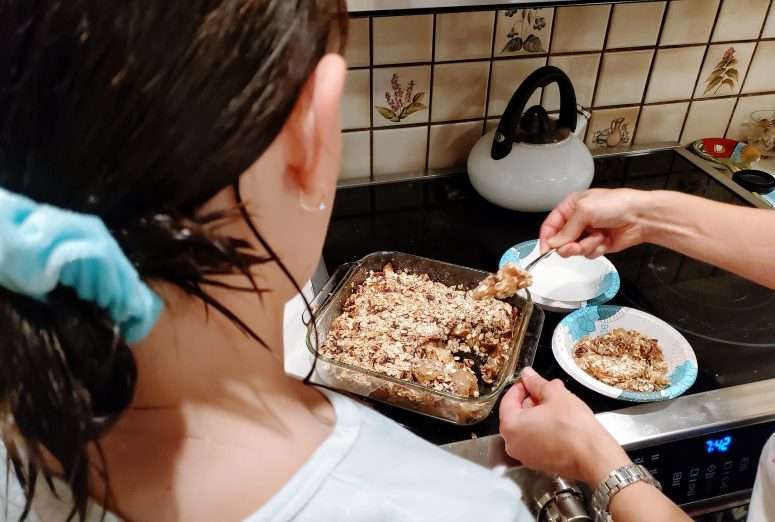