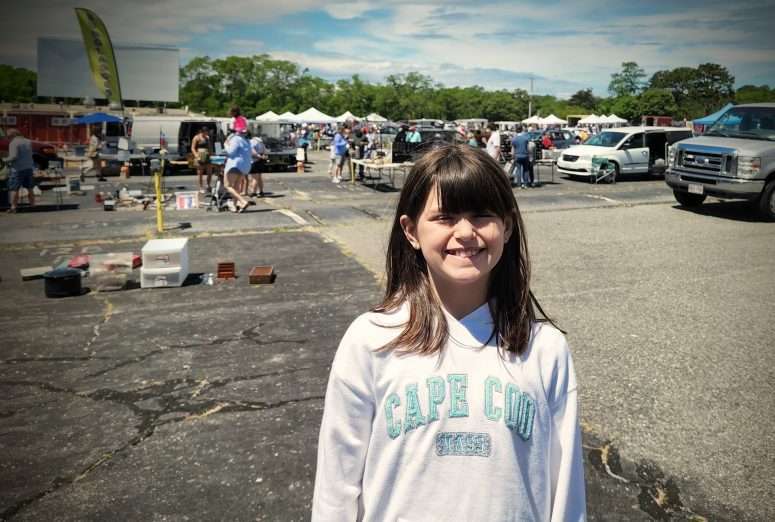 For all my indoor cat tendencies, I do like to plant a vegetable garden each year. With summer vacation a short half day away on Tuesday, the girls will be helping me more this year.

Forget about getting a puppy or other pet to teach kids responsibility, planting a garden is a much cheaper and just as effective way to teach kids long lasting life lessons: planning, prepping, growing, waiting. Really, if I could just work in flash cards….

In the book, Outdoor Kids in an Inside World, Steve Rinella has a chapter on the lessons families can learn from gardening. Like the best advice, it doesn’t need much space:

Sort of applies to a bountiful garden or…being a good parent.

Bypassed the couch completely and headed over the bridge to the Cape for Father’s Day and Poppy’s birthday. Last low traffic weekend.

Ally went right to work on the crafts.

Dash is stuck on the landing. No more dogs on the beach until after Labor Day.

While it was sunny, it was windy and cool and not a day for the beach or the pool.

We took the girls to the Wellfleet flea market. It was still ramping up for the summer but it was a good representative sample. The girls had many questions.

“People pay for this?”

“Do you really wear that?”

“What’s a bed pan? Who buys that at a flea market?”

The flea market is held at the Wellfleet drive-in which led to another round of questions. Which did not revolve around bodily functions but mostly the old drive-in speakers.

I wonder if I could install one to put in Ce’s room to communicate with her for the next five years.

After we tapped out at the market, we hit up some mini-golf.

We are ohh so close to the age where no one has a melt down during the game.

Cecilia threatened to bring this guy home one day if I didn’t let her win.

I called her bluff. She wouldn’t be able to handle his unkempt hair.

Finally, I think the impact of inflation hit home for the girls. They understand the CPI candy index and were indignant at the price hikes at the General Store.

It was Poppy’s birthday and he picked the traditional Cape seafood boil for his dinner.

For the longest time, we had trouble finding decent bread and were stuck with whatever the big supermarket carried. Happy to find that this year our favorite local fishmonger is now getting par baked ciabatta in from NYC and baking it up.

Though I will say the Old Bay drop biscuits we made were also a hit.

If it’s your birthday, you are getting a homemade cake. Lemon layer cake with lemon butter cream for Poppy.

The traditional Poppy and girl’s photo. We have quite the collection of these by now and they always sort of crack me up because the poses always vaguely remind me of Civil War daguerreotypes.

Cake tasted good. Though Ally said it was too lemony. Nothing a heaping helping of Poppy’s favorite Cool Whip condiment couldn’t solve.

Too windy for anyone to be on the beach but the storm did produce some dramatic clouds.

Happy Father’s Day to my fellow Dads out there.