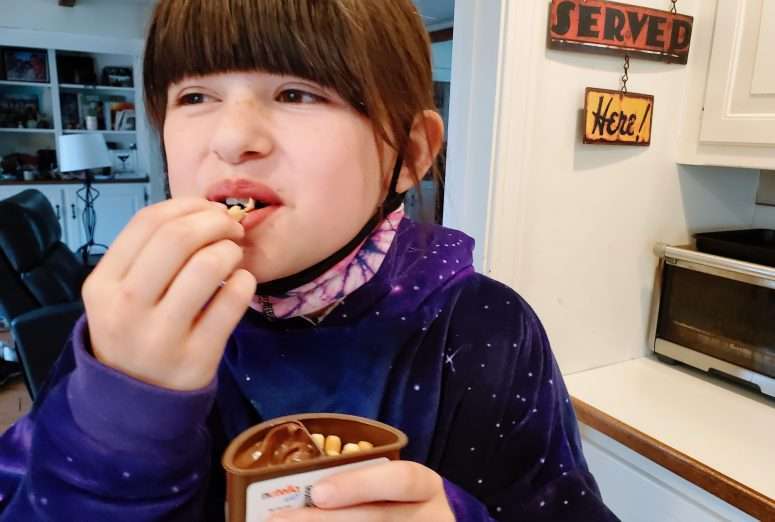 I’ve come to accept that selective ignorance is key to parenting survival. Not all the time. That might get dangerous but it is next to impossible to enjoy any of this if you are freaking out about every tiny decision or tiny probability of something happening. You wouldn’t last a week. You’d be a wreck.

Given the wide variety and amount of interaction Michelle has at her job, it’s somewhat surprising it took this long.

She’s okay. It appears to be relatively mild (as these things go). She’s mostly just relieved it fell between Paris, dance competition weekends, and a big upcoming family event.

I have to say, she’s not the best quarantine patient. I would be fine with a stack of books and occasional wellness checks. Michelle is a social animal. She started facetiming the girls after less than an hour. She likes to take “recess” breaks from her quarantine room.

Ally is handling this in stride. She is happy to be Michelle’s room service butler. Cece… let’s just say I hope we never end up in a nursing home. We’ll never see Cecilia again.

The girls do not like when Dad does the food shopping. If it’s not on the list, it doesn’t go in the basket.

I didn’t ask what was going on. They both practiced. That was enough.

That was enough. Or, slightly above average, was going to become the theme of the day.

I really don’t understand the current kid obsession with Mini Brands. Trying to think of the equivalent during my youth. Garbage Pail Kids? Didn’t really understand those either.

Covid could not keep me from the transfer station.

Leftover pizza and a pile of Pringles, some of which ended up on the pizza. Good enough.

Thankfully, even with one teenager in the house, they still want to dye eggs.

Okay, Ally wanted to dye eggs but Cecilia warmed up to it.

At least it’s been mostly sunny and warm so I haven’t had to lock the kids out of the house to keep them outside.

We moved her down to the porch in the afternoon to keep a closer eye on her.

With Michelle out of commission, it was up to me to prep for Easter, including the mac ‘n cheese which included an eye opening amount of cheddar cheese.

Quick tips if you find yourself staring down a 2-pound block of cheese that needs to be grated. First, put the cheese in the freezer for 30 minutes. Second, spray the grater with some non-stick spray. Third, make your teenager grate it.

And yes, the cream cheese pineapple Jello mold was also made. Mostly against my wishes.

Thankfully, the cuddura (Easter egg nest) cookies were made during the week, so the Irish only had to decorate them.

Finally, back to the couch for perogies and smoothies. I counted the smoothie as both fruit and vegetable.