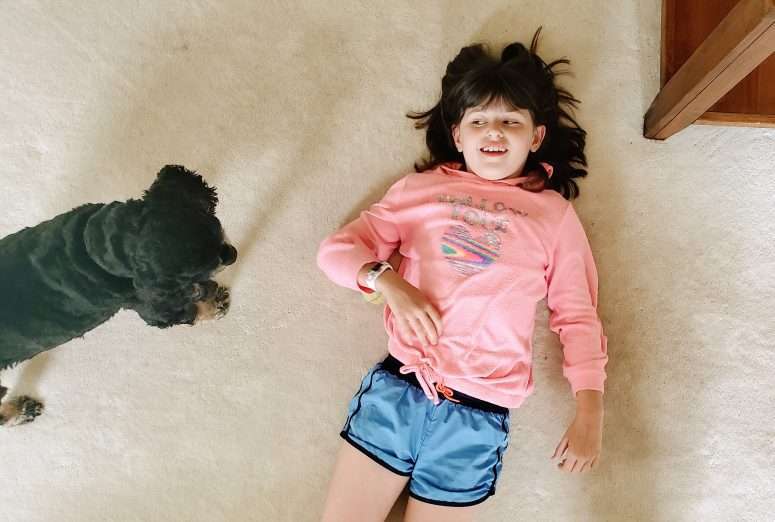 When I was growing up, 90% of my time and energy was spent on sports. The other ten percent was used up with SimCity strategies and reading sci-fi novels. But mostly it was sports. Any sport.

The girls have zero interest in sports, at least right now. Not even if it involves glitter. And that’s fine with me.

My life is better and richer now with musicals, bubblegum pop, trombone, dance recitals, and crafts.

Being a parent isn’t easy but a lot of it is common sense. Don’t be an idiot. Don’t try to give them your childhood. Don’t close your mind. Adjust.

A sign of times to come? We started Saturday on two different couches and three different devices. Ally and her friend were so excited to see each other they couldn’t wait until later in the day.

Cecilia was happy to have the TV to herself.

I’ve given up trying to feign interest in the various Disney shows. Each parent stupider than the last. FWIW, Cecilia seems to be losing interest too, but I’d rather Disney than the CW. Romantic supernatural vampires might be worse.

Making pizza dough in my pajamas first thing in the morning is pretty much how I picture retirement.

Even if it’s not a new book, opening a box of author copies is still a thrill.

Ally does a mean impression of Michelle’s typing style along with her wrapping up a conference call HR voice.

Family band practice time. If you want them to practice, you have to be the model.

At this point, Cecilia is quickly progressing past our decaying musical abilities. And she isn’t shy about pointing it out. Little does she know this is just another trick in Chelle’s parental practice arsenal.

Oh, I didn’t do that right? Show me the right way.

So we are halfway through our fitness challenge and staying strong.

I will say I have seen some… curious changes to Michelle’s palette. We are encouraged not to use any salad dressing so Michelle has developed a keen taste for French’s yellow mustard on her greens and protein.

Allison writing a Thank You note without being prompted. A sign of maturity or the apocalypse?

Here’s a big sister moment. Cecilia showing Ally how to use her debit card at checkout.

In true Ally fashion, she didn’t get something for herself. She bought Dash a new toy.

Then again PetSmart doesn’t sell candy for humans or I’m sure she would have bought that, too.

When we moved to town, we carefully selected a group of friends based on their potential to one day have a pool. Nothing better than good friends with a pool or a boat. After 15 years, our investment is finally paying dividends. We now have two friends with pools! Gonna be a good summer.

I forgot that 8 year olds still have vestigial gills. Ally spent a solid four hours in the water.

It’s not like the Donohues bring nothing to the party. I wasn’t making that morning dough for nothing.

The sign of a good poolside pizza party is a single remaining slice.

At the end of another Saturday, it wasn’t Ally that we had to drag out of the pool.