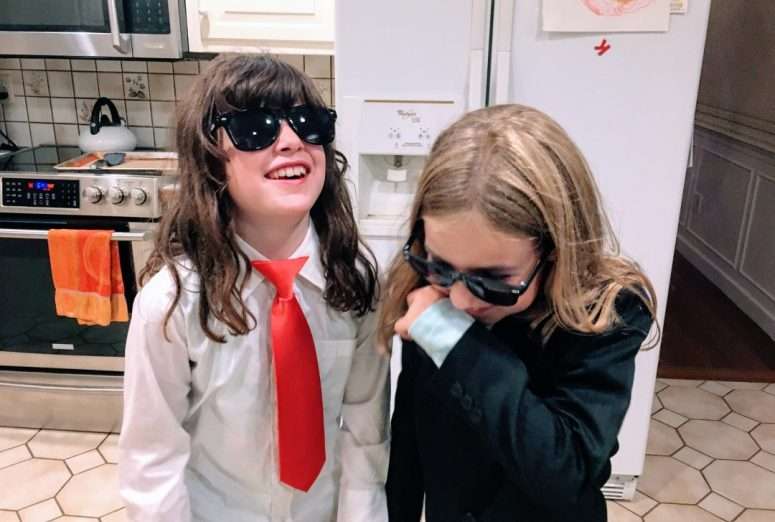 We spent the last 10 days bouncing between and exploring New York, Chicago and Boston and our biggest takeaway was a new respect and obsession with Detroit. Detroit pizza. We tried to go into Chicago with an open mind, but none of us were big fans of the deep dish. The Detroit slices we found at a food hall, those crispy, cheesy, close cousins to our beloved Sicilian? Those were amazing.

As a pizza nerd, I was in heaven. As an Amazon prime customer, I had a pan waiting when we returned from the airport. And Saturday night I had people over to test the new recipe.

But before the pizza, we had to survive soccer….

Grammy and Poppy watched the girls on Friday night and stayed over to witness the chaos and joy of sunrise pee wee soccer for themselves. Allison was very excited to have extra spectators. Very. At this point in time, whether it’s dance, dinner or Saturday soccer, the world is a stage for Allison and the more people to clap the better.

She was so excited she barely sat on the sofa. Looks at those eyes! Those eyes either say, “I’m going to score 14 goals today, Coach!” Or, “I’m going to do cartwheels in the rain until I’m so dizzy I throw up these chocolate pancakes!” 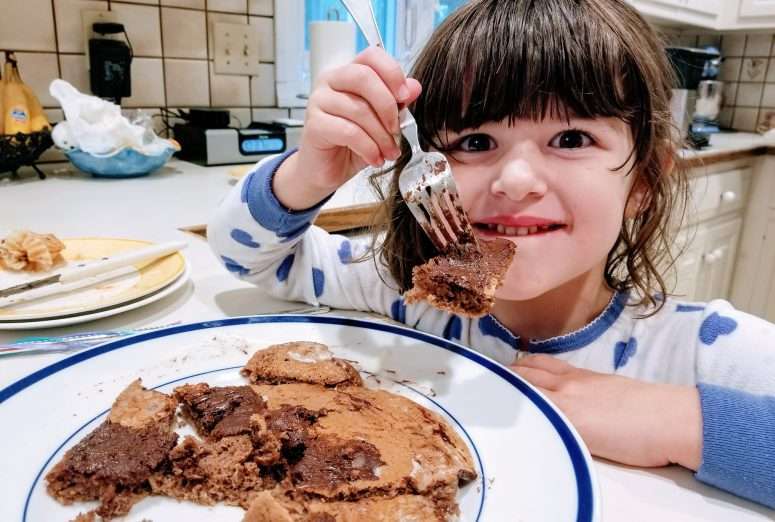 Who knew four year olds were so bothered by the rain? We continued our rollercoaster season. One week up and focused, the next dull and disinterested. I’m not taking all the blame this week. I had a few new tricks, but everything was falling flat. 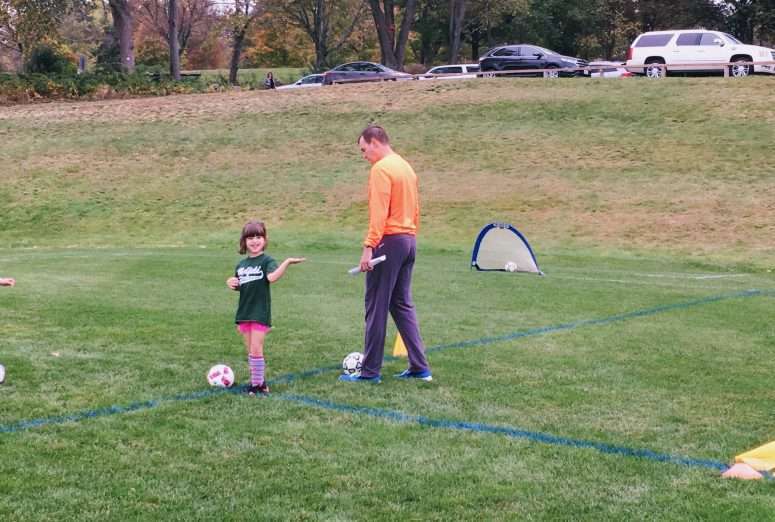 Everything except the lure of Popsicles. In the end, despite the rain and lackadaisical interest in soccer, they appeared to have fun. 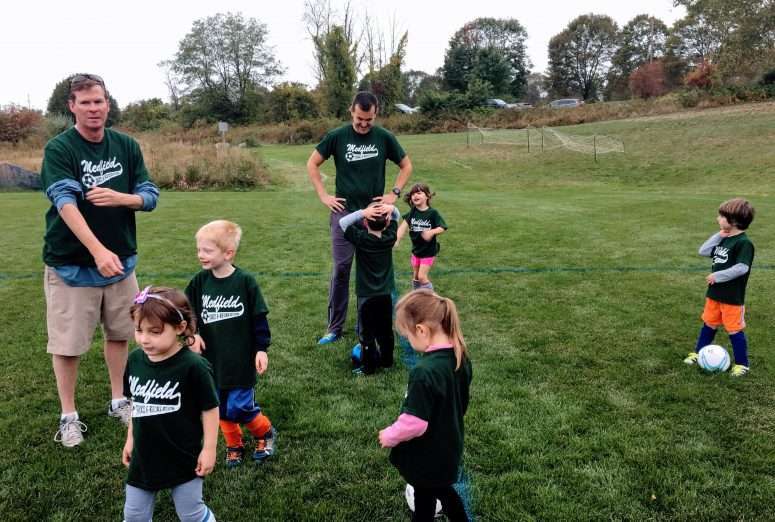 The morning energy high and the blue popsicle sugar quickly wore off for Allison and she was finally ready for some couch time. With a birthday party (soccer themed no less!) looming in the afternoon, we were fine with it. 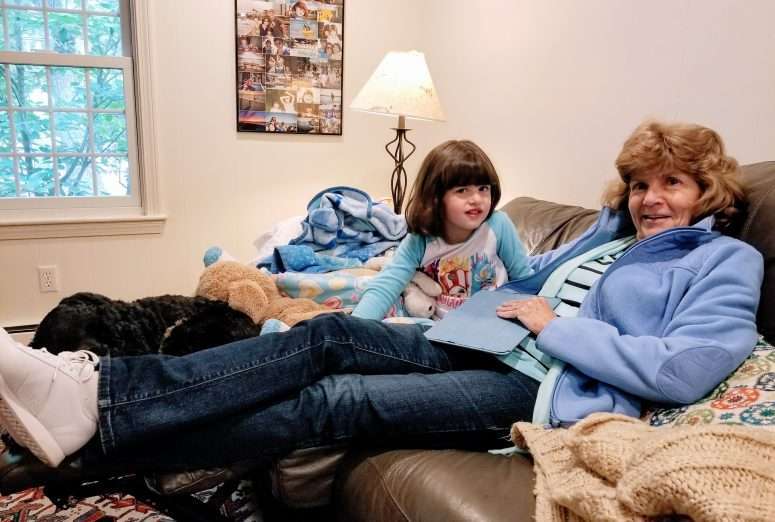 With the grandparents around, it allowed us some rare quality time with Dash. He enjoyed having both parents take him on a long woods walk. 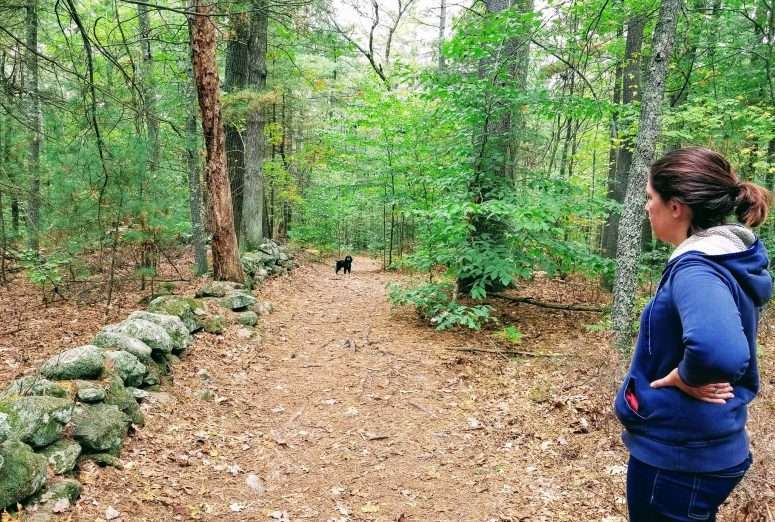 By the time we returned, Ally had recovered enough to have lunch. Doritos and chocolate pancakes. Need to work on this girl’s diet. 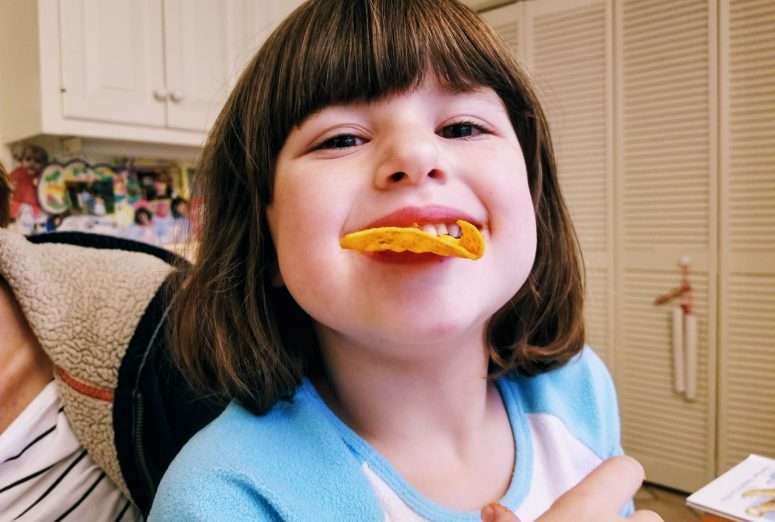 With friends coming over later, it was time to straighten up the basement. Or, as Allison sees it, time for another performance! 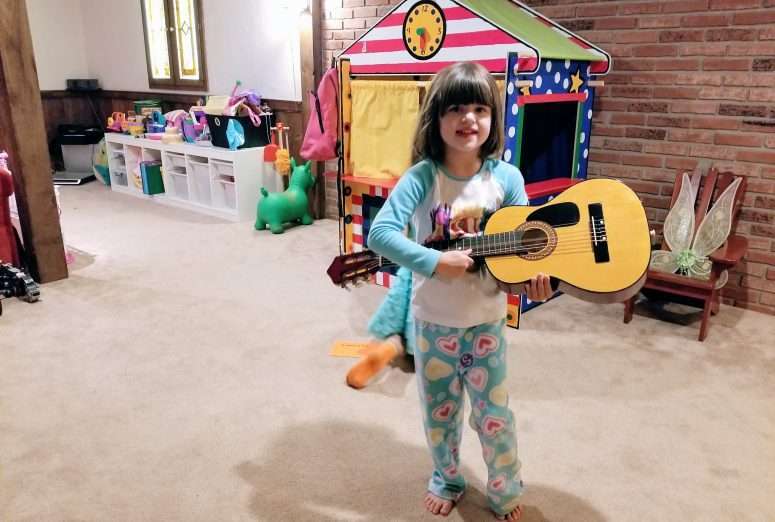 Anytime I start questioning where Cecilia came from in the next 10 years, show me this photo of her reading by herself on the swings. She definitely has at least some of my DNA. 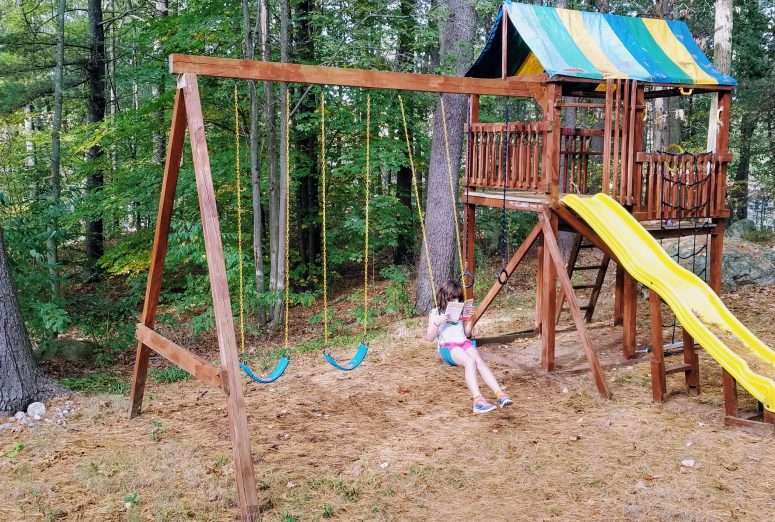 After the birthday party, the pizza guinea pigs arrived, but before we made it to the main event, we had to feed the children. 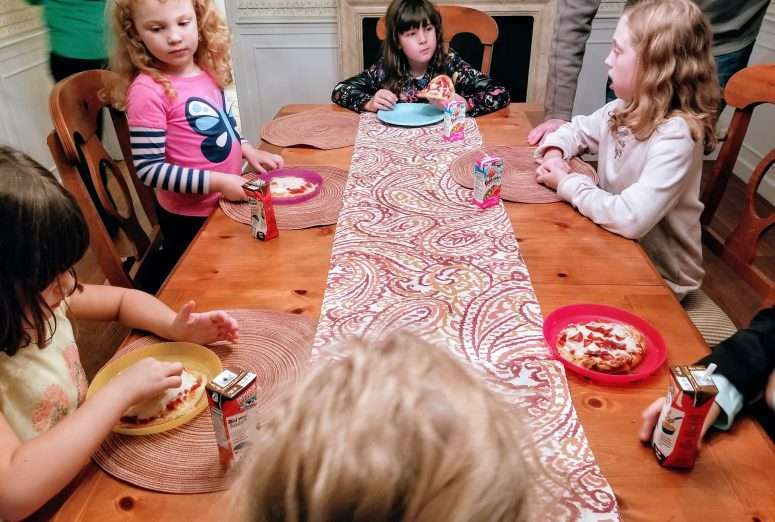 Then send them into the basement. God bless basements! 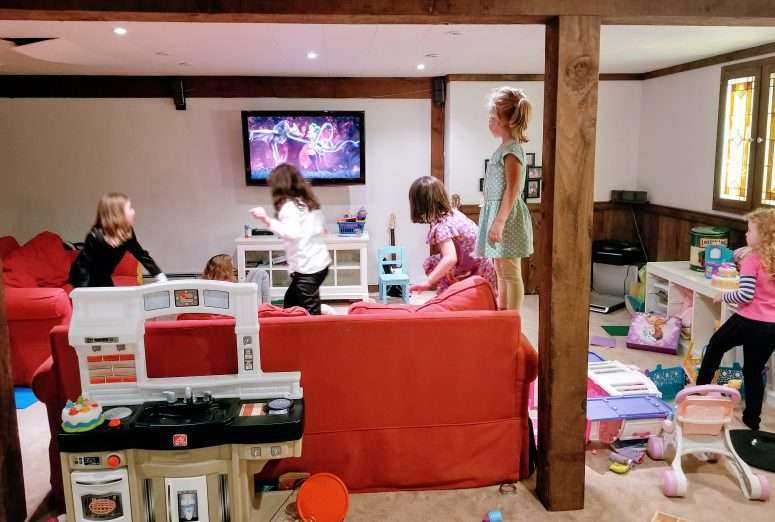 Detroit pizza is a square pizza like a Sicilian, but with a denser crust. It’s built upside down, so dough, toppings, cheese then sauce. And it has cheese all the way to the sides with allows the edges to nudge up against being burnt, but in the best possible way. 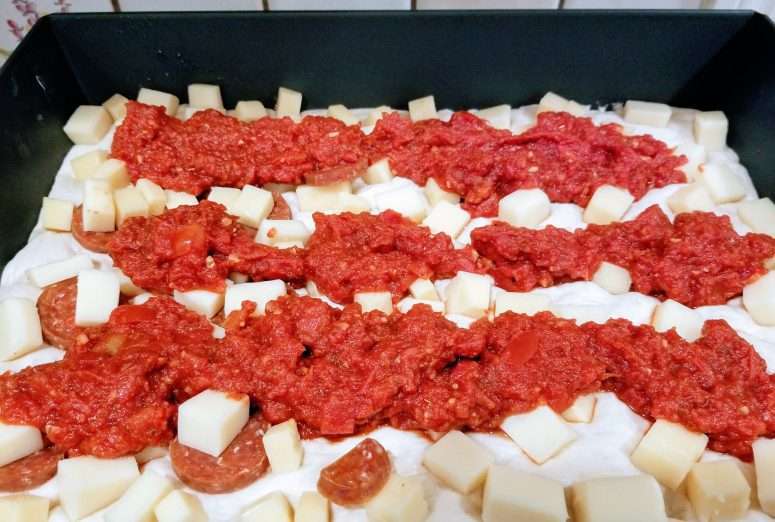 In short, it’s really good, but also really indulgent pizza. Reviews were positive from the taste testers. The edges look almost burnt, but they definitely don’t taste burnt. They taste like lacy bits of pizza heaven. 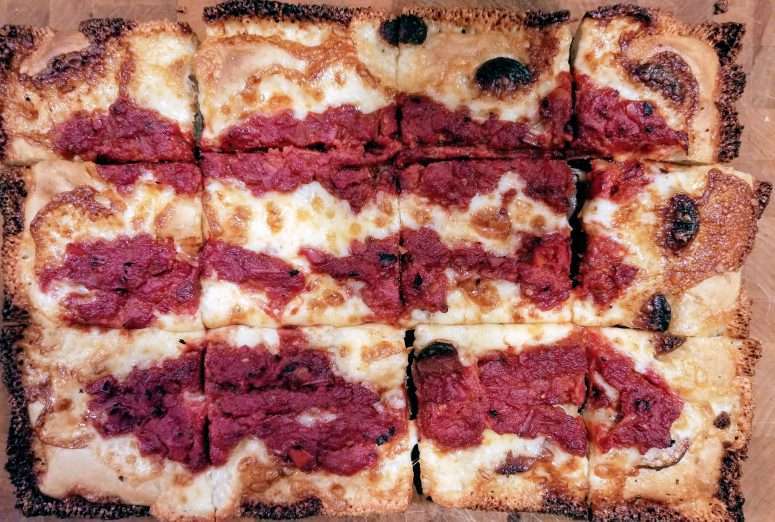 If you are worried about too much cheese, you are making pizza wrong. 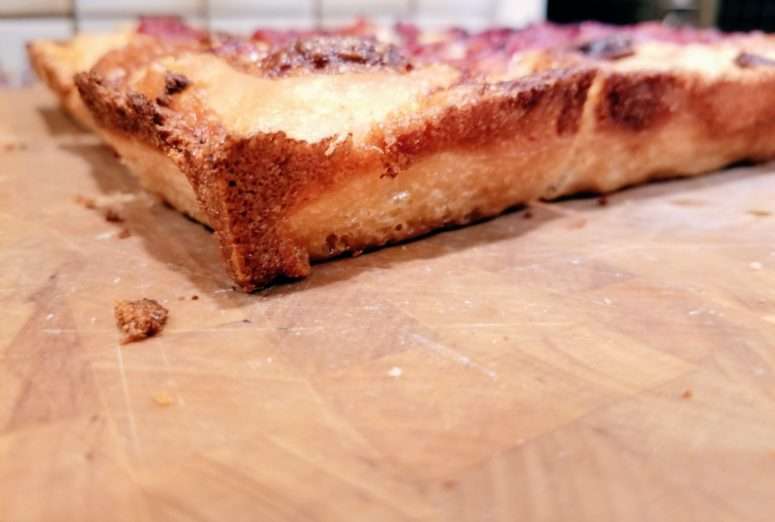 A tighter, denser crumb than the Sicilian, but you need some structure to support that cheese! 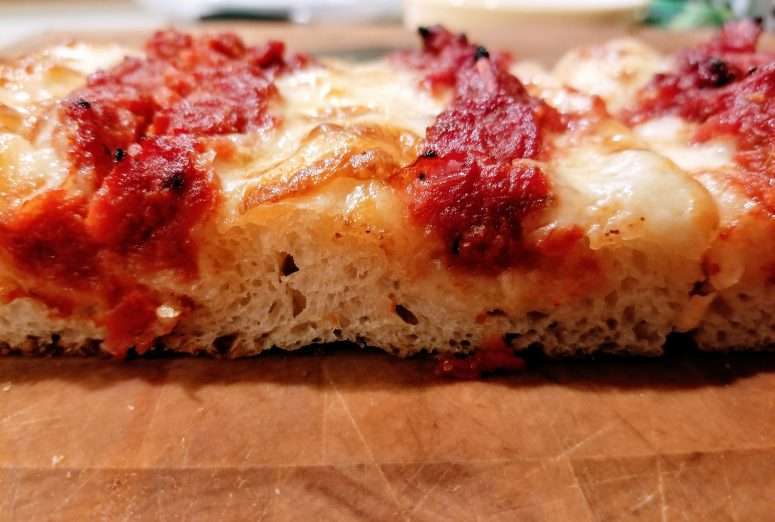 In case the Detroit fell flat, there were some wood-fired Uuni pizzas as backup. 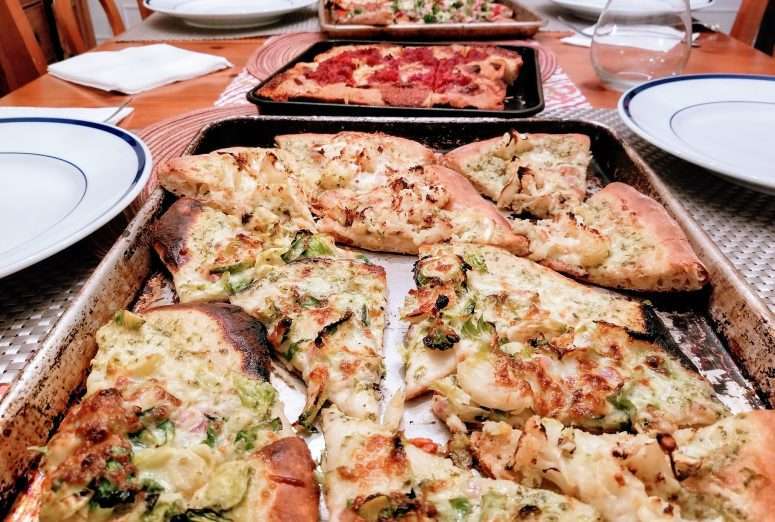 Back home and another Saturday done. For me, any day that includes trying out a new recipe and feeding friends is a good one. Pizza people are mine kind of people!