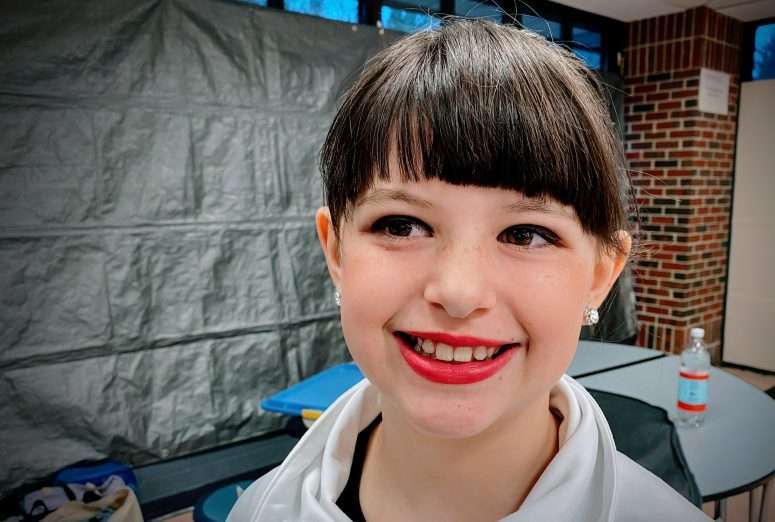 When I was growing up, I loved basketball, soccer, Wiffle ball, reading, and computer games. My girls like… none of that. Which is fine. A Dad’s job is to work with them to find their lane, not force them to relive your own childhood. It might take several tries, it will definitely take some patience, and it might take some experimentation. Our ideas might be proven right… (they are slowly coming around on reading and flash cards) or proven wrong (despite their height, they will not be playing basketball). That doesn’t matter.

There’s an infinite number of lanes possible for every child in this world. We might have found one for Ally on Saturday.

No time for relaxing and waking up on the couch. Or for heading out for soggy group runs. It was all about dancing in the dark. Wait, no dancing yet. It was all about hair and makeup in the pitch black. Today was Ally’s first dance competition weekend. It was a whole new world for me and Michelle.

You can see Michelle and I were already demoted from stylist.

My job was just to drive to the venue and wait quietly with a book.

Michelle did the parent small talk. I think we managed to get the division of labor right.

For the record, I did my job. We were on time and told to stay at least 15 fifteen behind at all times.

While Ally got prepped, Cecilia and I found a local diner where we brought the average age down by fifty years.

I looked forward to the time where I can be a 7 a.m. regular and talk about the weather and fried bologna with such fervor.

There were some nerves. But also a lot of excitement.

I did note a distinct lack of Dance Dad merch available. I think I could potentially fill this niche. Maybe next competition I’ll set up outside. There appeared to be a lot of Dads aimlessly wandering near the doors. I’m guessing this only picked up later in the day when the basketball came on.

Rentable Dad igloos where you can wait and get paged when your daughter’s dance is coming up? Could work. Worth thinking about, at least.

There was no photo or video allowed in the auditorium so you’ll have to take my word, or just check out that smile, to see that she and her team did great.

Also, please give a hand to the choreographer that had to deal with the slight height differentials.

What do you eat after a morning of competitive dance? Pizza rolls and frozen pineapples.

We might be figuring out Ally’s interests but I still have no idea about her palette.

Ally then did make it to the couch to watch… more of the dance competition that was streamed online.

I will give the company credit, even if the Dads were shunted aside, the logistics were very good. I appreciate an efficient operation.

For those building their own diorama or map at home, the transfer station has repurposed the old battery recycling building. Just thought you should know.

Cecilia is very… deliberate in all that she does, including picking airplane snacks for our upcoming trip.

She has one level when she’s just spending our money, but you should see the time she invests in choosing anything with her own money or gift card.

We did finally get Ally up and off the couch for a few hours where she proceeded to do some scooter dancing.

I did manage to get control of the TV for a few hours but Ally was still going strong on dance. As was the dance competition. I feel for the instructors who are there for 15+ hours.

Maybe this is her lane. Maybe not. We’ll see. But I do know that by the time you are reading this, we’ll be on the way to day two of the competition.

And Ally will be smiling. That’s worth it.