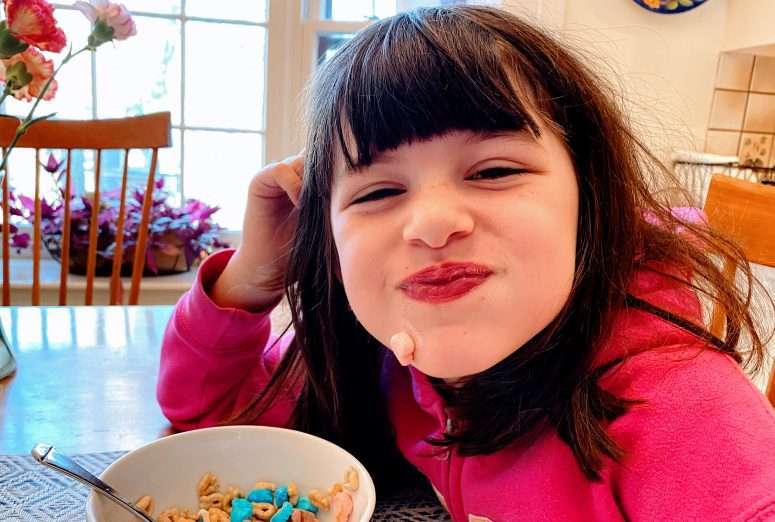 Even as the days blend together, we are settling into something resembling a routine and trying to make the best of it. With both Michelle and I on a lot of calls, we are letting serendipity and curiosity play a large part in the homeschooling effort. Yup, fancy way of saying we’re locking the girls in their rooms for a couple hours in the morning and afternoon. We make sure they are fed and watered first. I think they’ll be okay in the short-term.

We’re doing our best to follow the school’s suggestions but if they want to go down a three hour rabbit hole about how to make your own Cheetos or M&Ms (thanks Bon Appetit YouTube channel)…who am I to argue? I don’t think a parent should force their child to master anything but I do think it’s their job to help them discover the possibilities in life. After that it’s up to them.

Though if it’s going to involve the trombone, maybe wait for Dad to get off the phone.

Can you see the disgust on Michelle’s face for the morning’s show choice? Some live-action show about pre-teen lifeguards. It was terrible. Definitely not realistic. Michelle made them watch Rugrats instead. 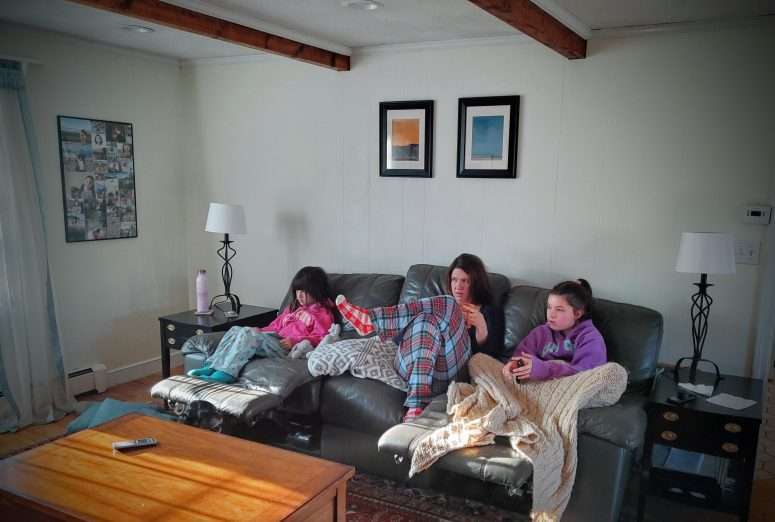 I went out for a sanity run and was heartened by lots of chalk messages (and one amusing would you rather question with buckets of rocks for voting). 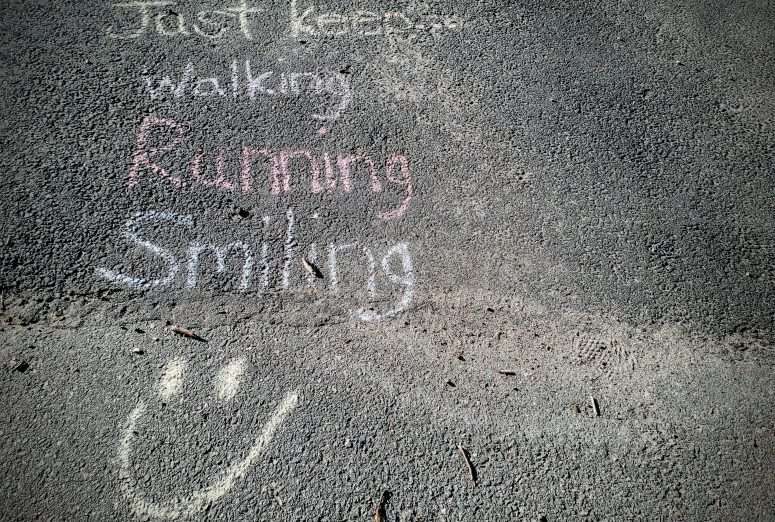 When I returned, I found the kid’s breakfast cafe had re-opened this weekend and a very nice breakfast waiting. 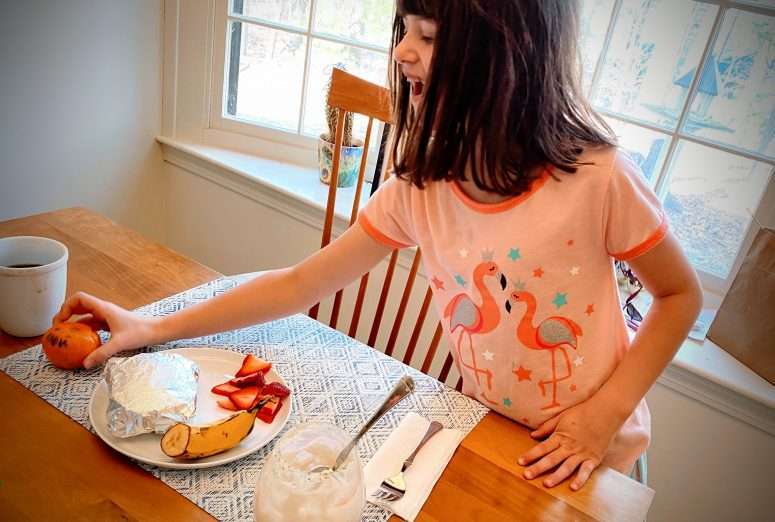 Allison is not letting the quarantine get in the way of her Taylor Swift study. Also functions as a good workout. 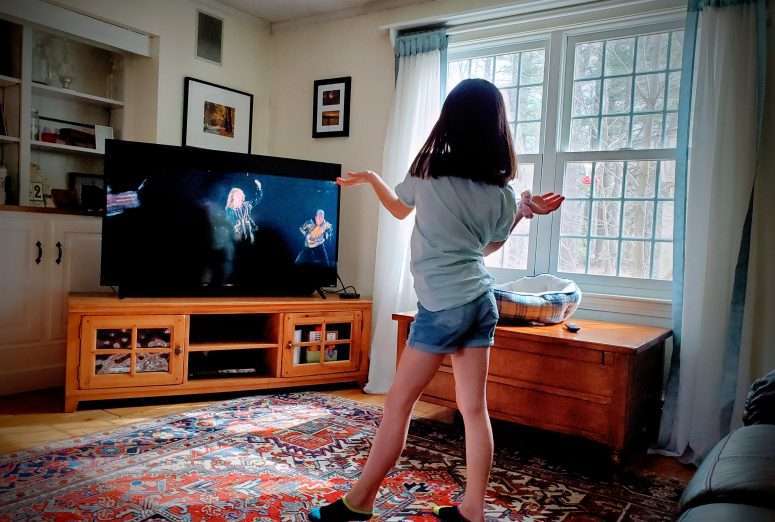 We had another acoustic cul-de-sac concert by Dave. 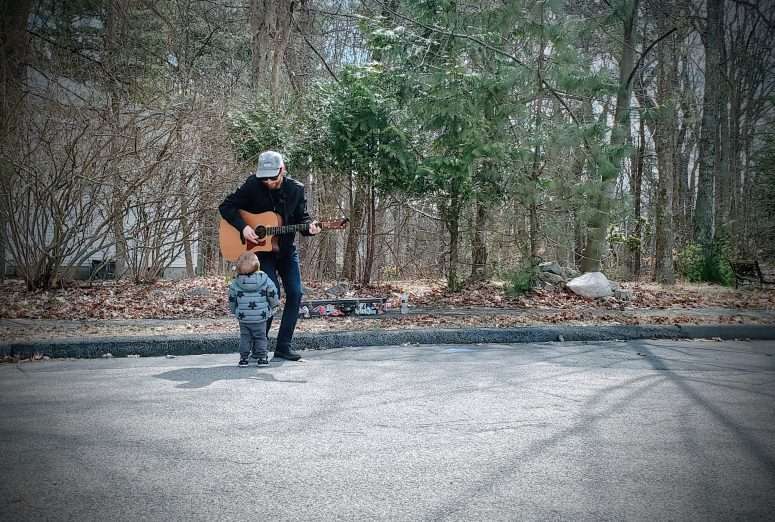 The girls then made a giant Candyland chalk gameboard. 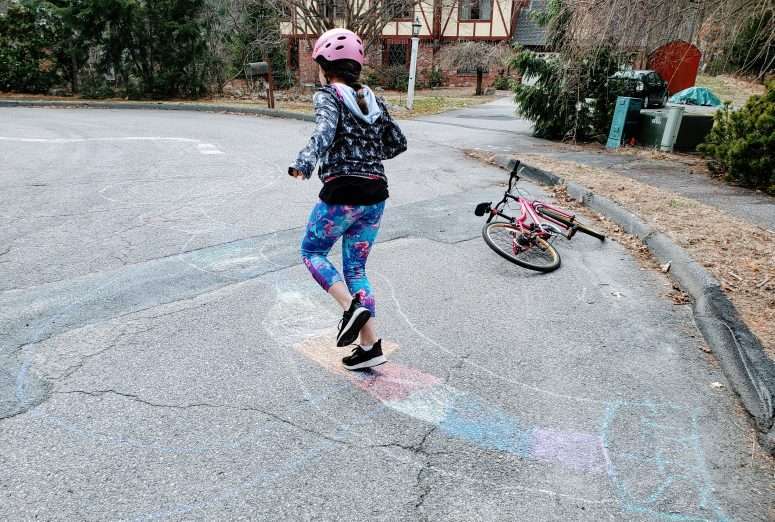 Video lunch with Grammie. Allison was worried about Poppy’s mental health with no sports on to ‘yell at the TV.’ We assured her he was likely quite happy to yell at old game replays. 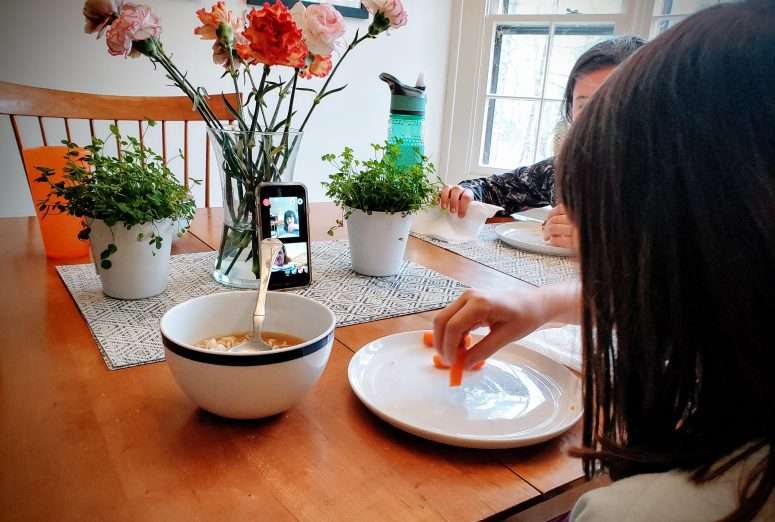 Digging deep into past presents, we broke open the crystal making kit. You know soap making and make-your-own stuffed wombat aren’t far behind. 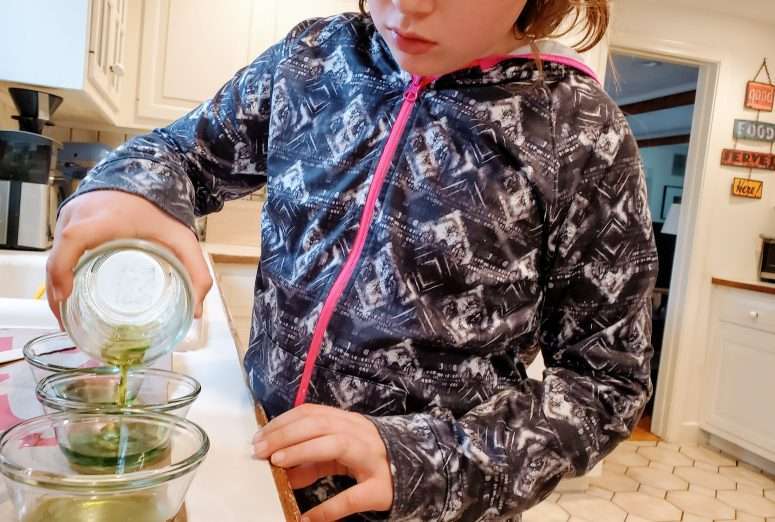 One place that is definitely essential and definitely crowded is the transfer station. Turns out it’s not difficult to social distance yourself from your neighbor’s reeking trash. 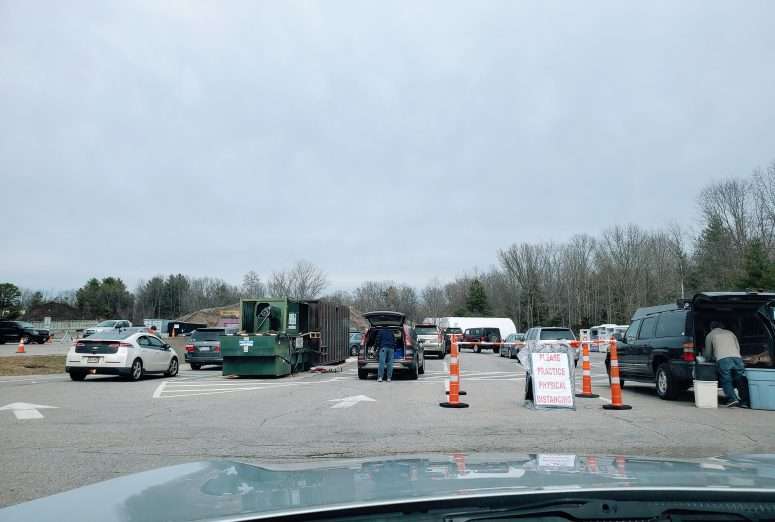 I used to worry that our house was a little too big for just the four of us. Not a concern the last few weeks. Very happy to have a basement. It doesn’t contains the glitter but it does muffle the screams and Kidz Bop songs. 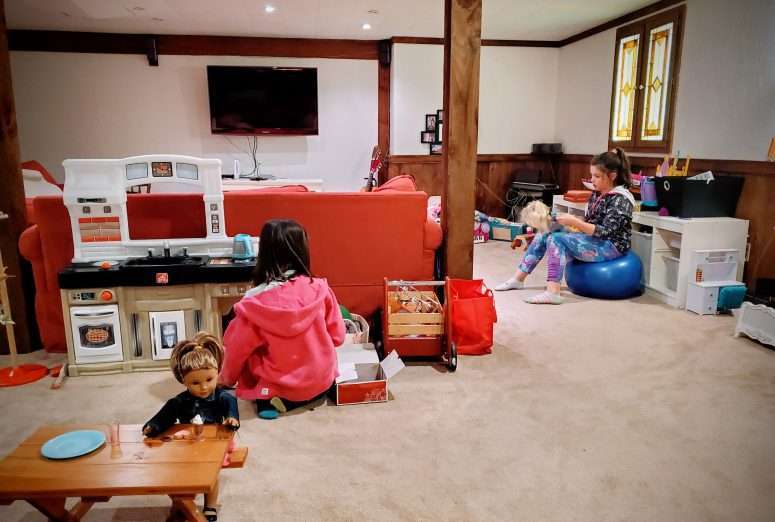 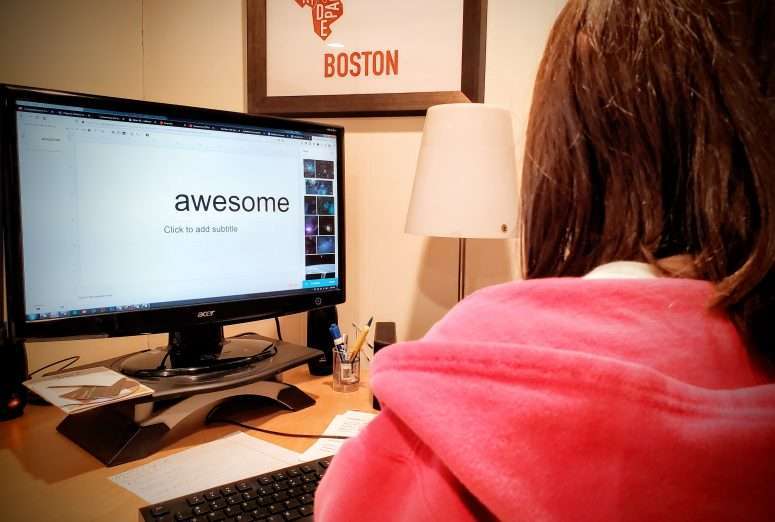 We made Katharine Hepburn’s brownies which led to a conversation about just who Katharine Hepburn was and if she was such a famous actress why are brownies named after her. The answer to all those question is, of course, because she was a badass. I think next Saturday’s movie might have to be The Philadelphia Story. 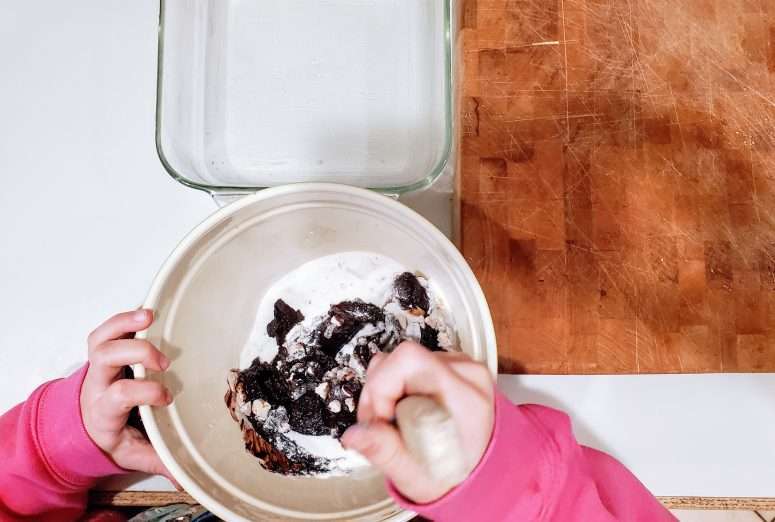 I might still be weeks from peak anxiety baking. After the brownies, I made some freeze-ahead biscuits and prepped some overnight dough for another sandwich loaf. That brings this week’s totals to 4 loaves of bread, 16 biscuits, brownies and pizzas.

Related note, if you live close by and aren’t opposed to finding warm bread in your mailbox, let me know, my freezer and my wife have reached capacity. 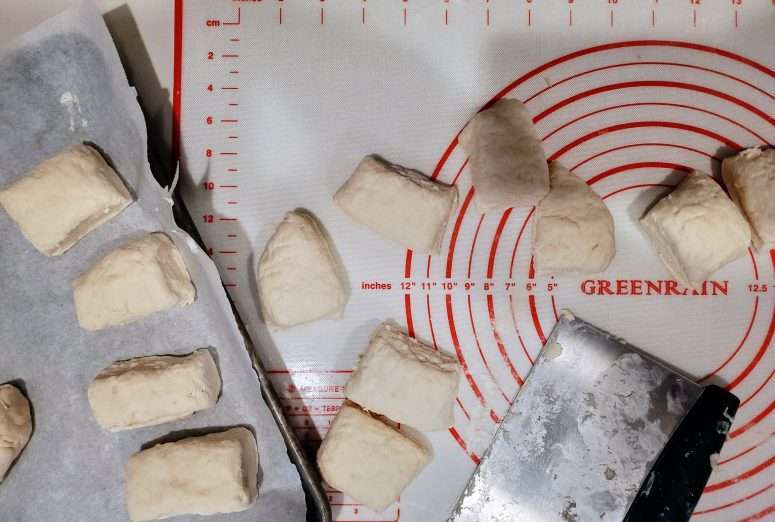 Despite confusing Ally because it was not the Super Bowl, we had nachos on the couch for dinner and watched Onward (pocket review: not peak Pixar but sweet and silly).

I had conversations with friends before all this happened about how studios should release new movies on demand because the theater experience is often rather miserable and expensive. I was okay with a $30 threshold so paying $20 for Onward felt like a bargain. 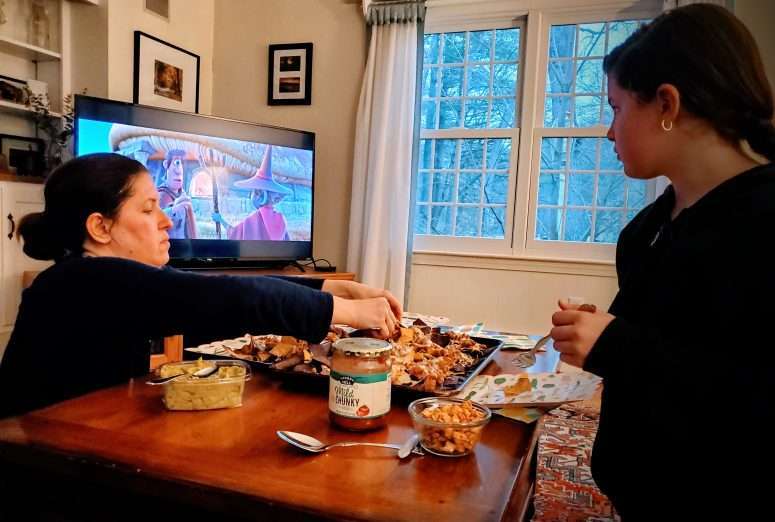 Tune in next week to see if I can make the third exact same Saturday in a row seem mildly interesting and unique. In the meantime, stay safe.