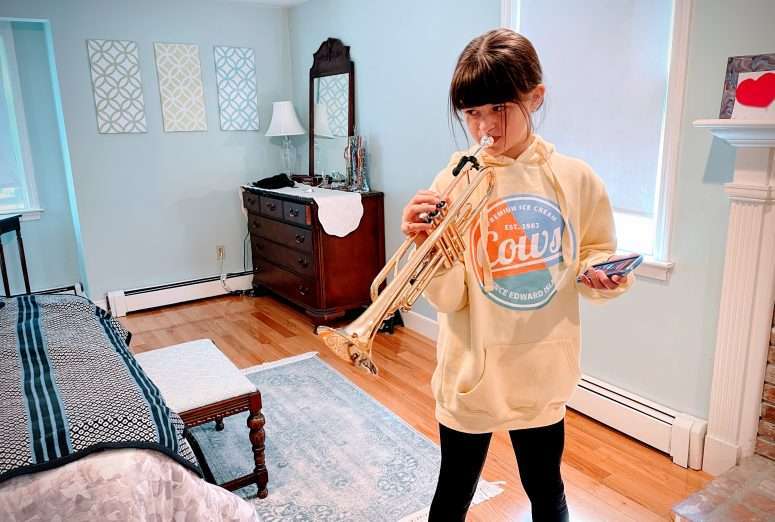 It was our town’s discovery day yesterday. Sort of a cross between a block party, street carnival, and chamber of commerce power point presentation. I’m sure your town has something similar.

It was 3 o’clock and the ubiquitous plastic trumpets someone had mistakenly thought were a good idea had wormed their way into my inner ear and turned my heart as black as the Grinch’s on Christmas Eve. I was done. Ally wanted to stay longer.

As a parent, it feels as if I’m perpetually short on time and always looking ahead to the next thing. But what am I actually rushing toward and what am I rushing away from? Do I really want to rush home to a house under renovation? Do I need to vacuum the glitter off the stairs again? Or remind the girls to practice their instruments?

I’m really just moving too quickly through their childhood. How important will those extra 15 minutes seem in a few years? How much would I give for a few minutes back right now before she becomes an irrational teenager?

Why rush toward an uncertain future? Better to focus on the present.

Still, a present without the plastic vuvuzelas would have been nice.

It was definitely a onesie type of morning. It was a long sleeves and gloves morning run.

The big weekend news was that we bought a new (used) car. No, we are not replacing the Focus. Not yet. It received a stay of execution from the scrap yard for a few more months.

We replaced our “new” car, the one we bought when Cece was two years old, with the exact same make and model, just a decade or so later. Feels like a very Mike and Michelle thing to do.

It wasn’t a…terrible experience which is just about the best you can hope for when buying a car.

Michelle has the basics of driving down but the technology and features have advanced a bit in the last ten years. She’s going to need to read the manual.

Not having a kitchen isn’t stopping us from at least enjoying some baked apple treats like crockpot applesauce.

The swap shop is closing next week for donations. It must mean fall is really here.

You don’t mark the seasons by the Transfer Station signs?

She’s still not too big to want to ride the big inflatable slides.

She is big enough to at least understand the economics of tickets now.

Best part is that now both girls are old enough to go off on their own. Makes this a whole different experience.

I asked her about her favorite booth later in the day. Sadly, it was not the Soles booth, but rather the the one with cotton candy. Should have known.

After finally escaping the trumpets, we met with the kitchen designer to go over progress. Countertops and final plumbing next week. Getting closer to being able to make pizza and bread again.

Then it was off to friends for a dominoes night. Where we did actually play some dominoes. It’s always touch and go whether we play or just use it as an excuse to get together.

We did not drink enough to let this completely illegal move slide.

Most of these kids literally met in neighboring cribs before they could walk or talk. It’s nice to see the bonds of child care (and the pain of paying for that child care) forges a bond strong enough to whether even the hormones of teenagers.