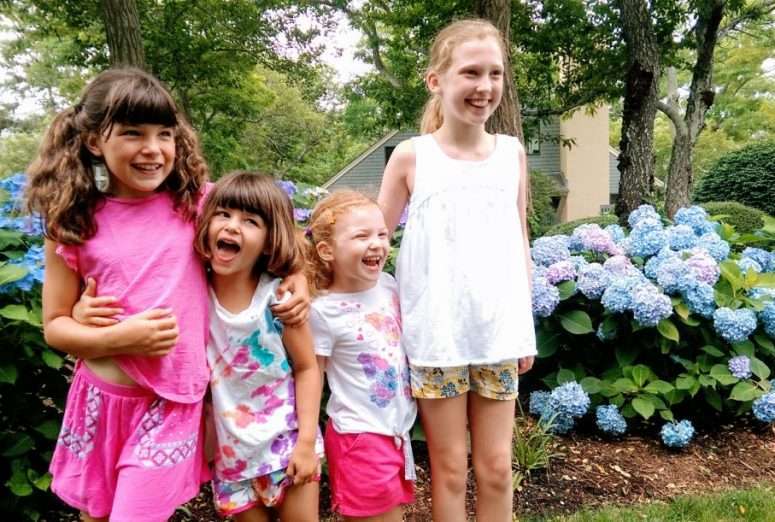 Telling time with a pre-schooler revolves mostly around a few very personal things. Is it a school day or home day? Is it time to watch a show? Is it time to eat dessert? That’s pretty much it, at least with our Allison.

So we made a cardinal parenting mistake when we mentioned that one of her best friends from school would be coming to the beach house and SLEEPING OVER. It was like Christmas, a musical, a Full House marathon and the Easter Bunny wrapped up into one.

Only this vague, nebulous future date was too hard to comprehend and hardly a day passed when she didn’t ask if today was the day we went to beach house with her friend. We had to say no and crush her sprit for many days, but finally…finally this weekend we were able to say yes. Today was the day.

We actually went down on Friday, so we woke up Saturday with a full house of friends, a full day of activities and no Full House on the television.

Despite warm bagels on offer, Ally preferred watermelon and cottage cheese. No one, not even market research, can explain Ally’s love of large curd dairy products at all meals. We’re rolling with it for now. She’s clearly not lactose intolerant. 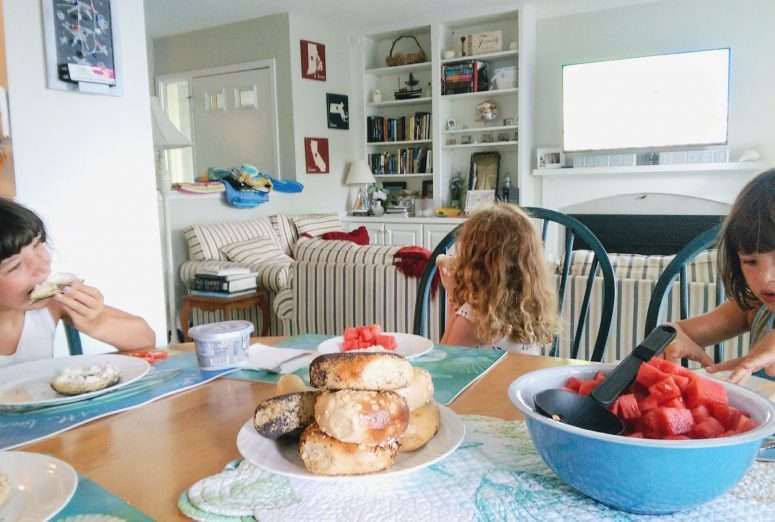 If you are going to crash at Grammie’s beach house, the one rule is that you have to water the plants. Believe it or not, Ally and Hope did this on their own. She knows her Grammie. 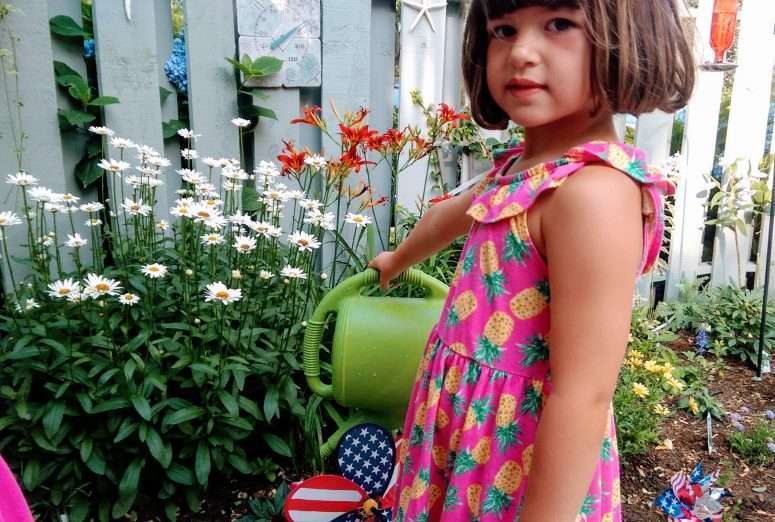 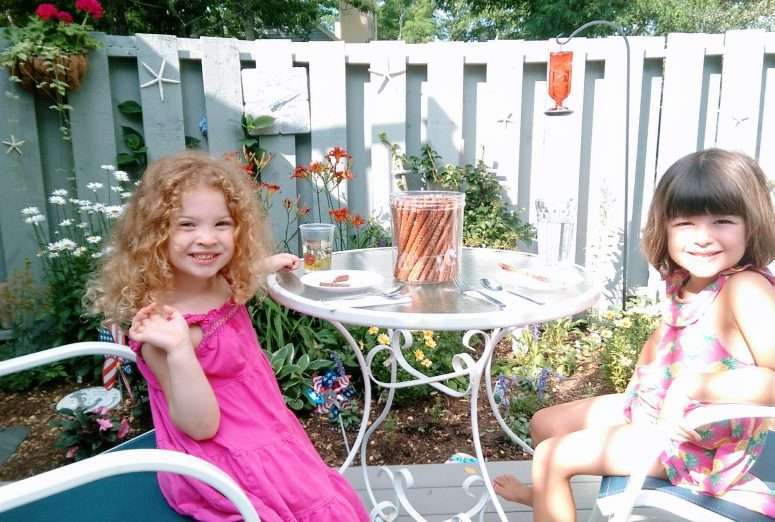 Day care definitely teaches them the importance of sun screen. They are mostly proficient (thought left unattended they might go through a whole spray can) at applying it themselves. 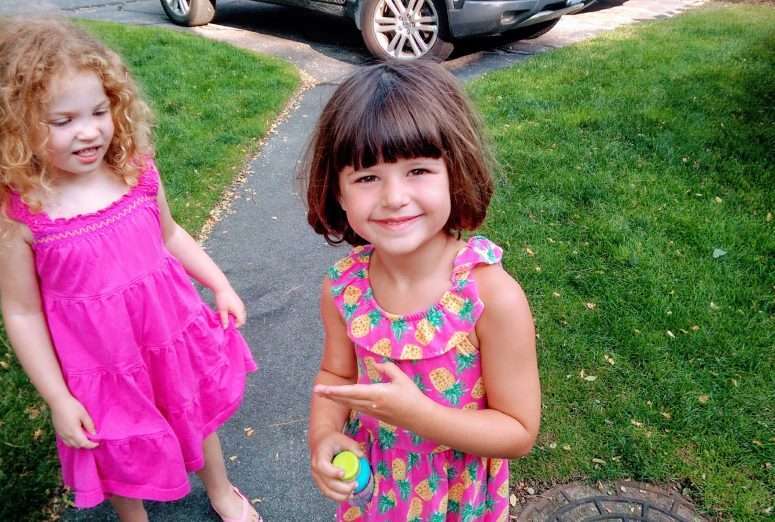 After the tea party and the sunscreen, it was time to hit the bike trail. Next summer, they will probably be too big to squeeze into the trailer. But for now, they were snug, but happy as clams. 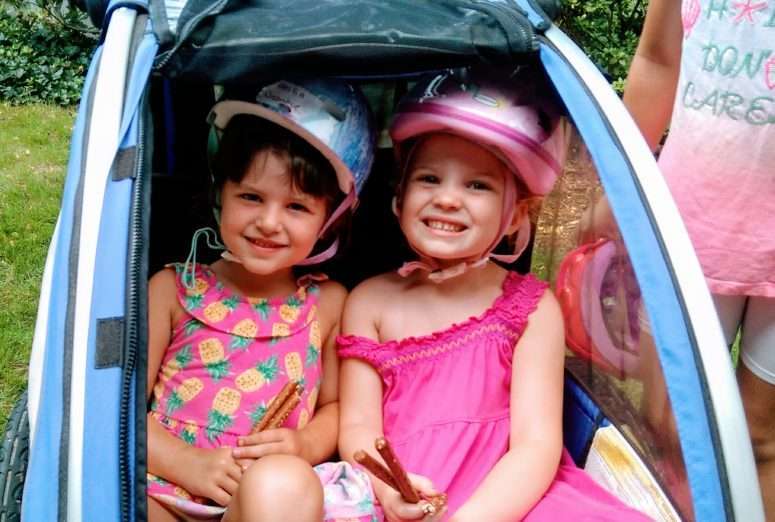 First stop (can you guess?) was the General Store for some penny candy to fuel the start of the day. Pretzel sticks can only get you so far. 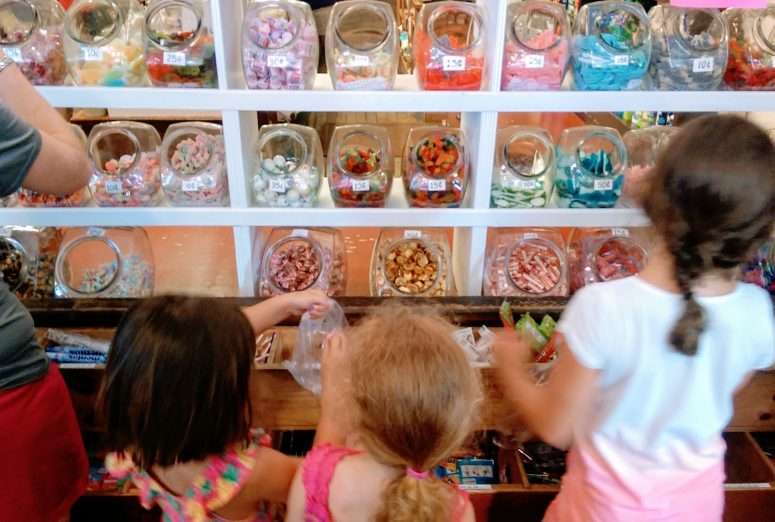 There was a lot of comparison after the fact about the choices each one made to make up their dollar bag. 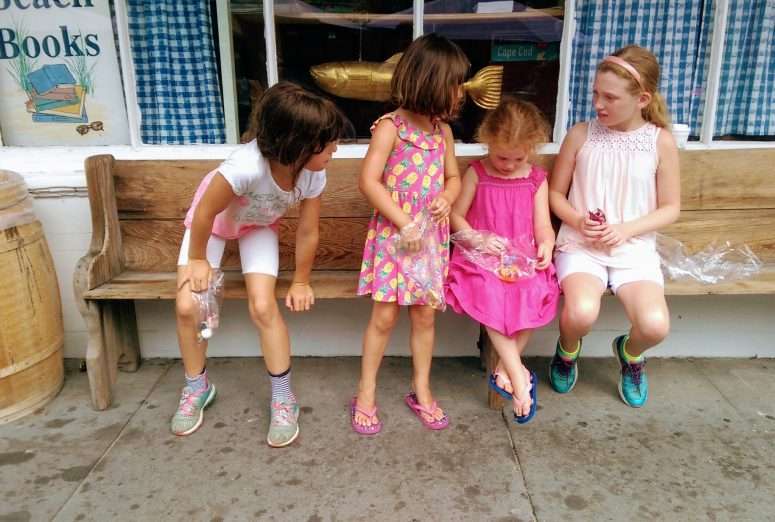 Next stop on the bike ride was the playground and some zip lining and monkey bars. Don’t think Michelle didn’t also get in on the action. 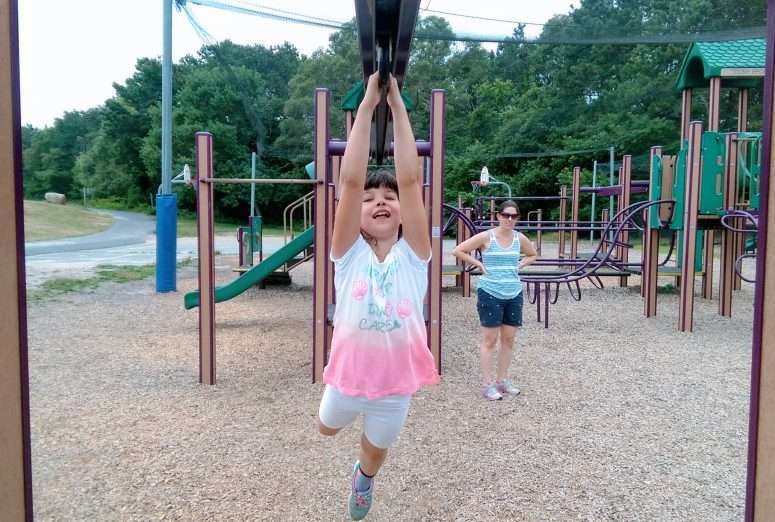 We are working on that next parental milestone where all kids are able to go on the swings without constant pushing. So close… 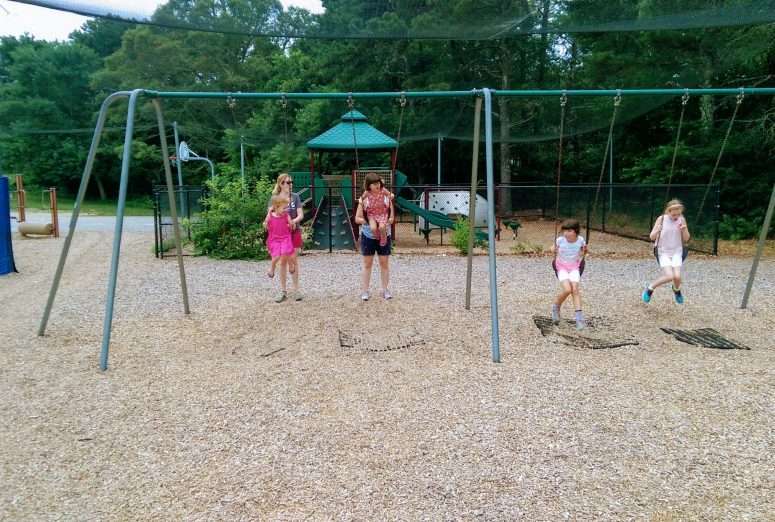 Next, we were back on the bike trail to Cobie’s for a traditional Cape fried seafood lunch with some soft serve. Why burn off those calories biking there if you are not going to get the clam strips? 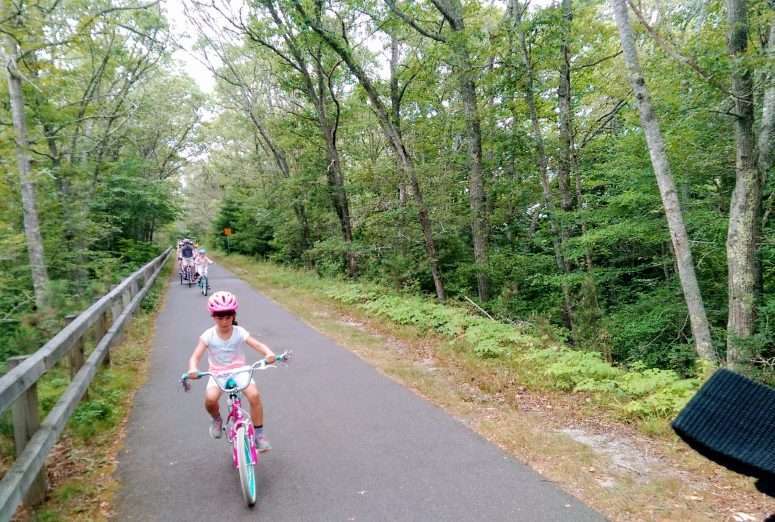 Guess which part of lunch these two preferred? 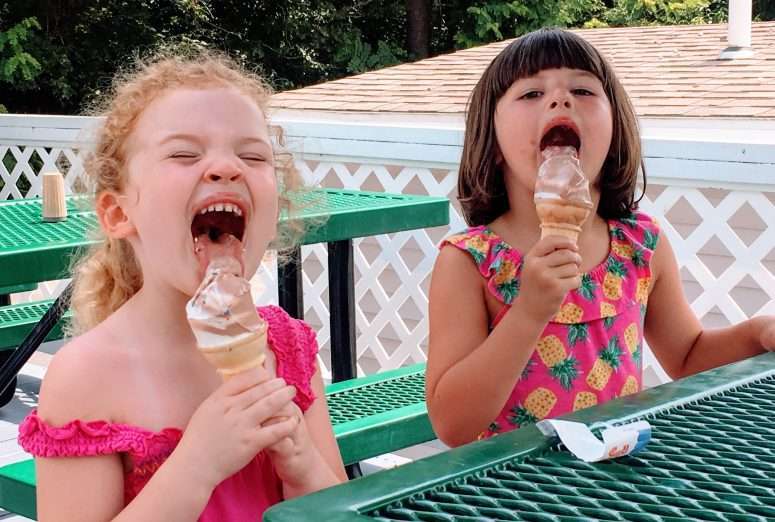 I assume if I had boys, I’d make more unscheduled stops at construction sites and demolition derbies. But with my girls it was an off the agenda stop at a jewelry and craft stand. 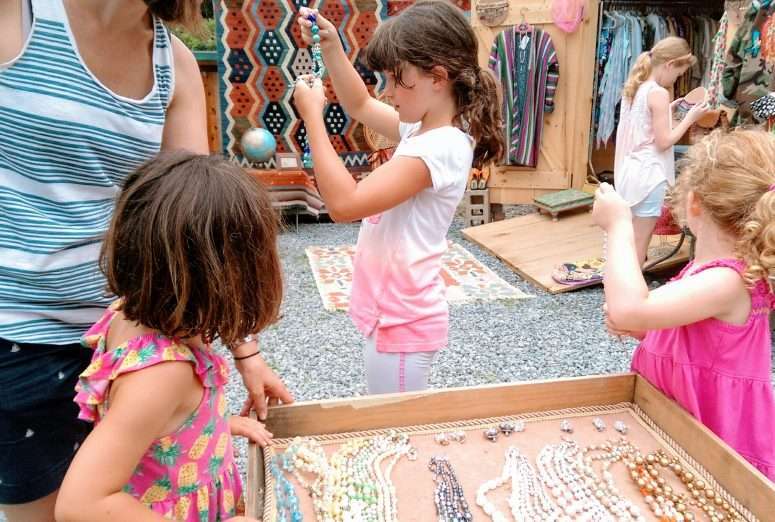 When we made it back home it was time to hit the pool. A week of upper 80s made the water warm enough that even I had little objection to getting in. 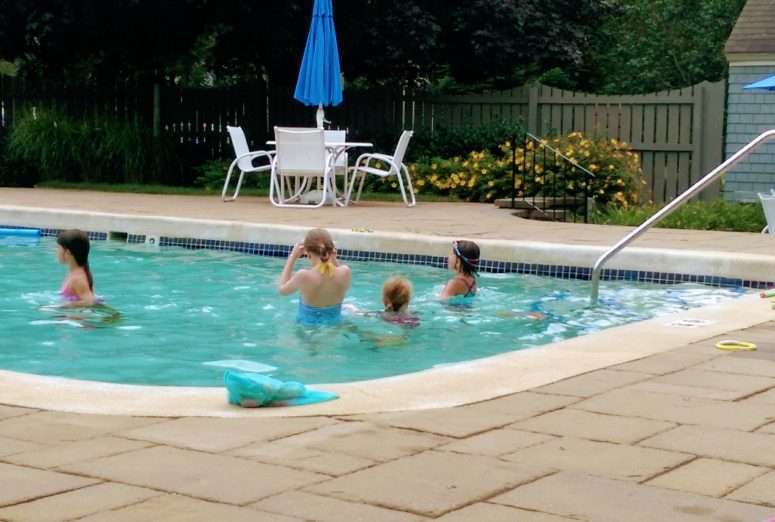 After the pool, it was down to the beach to scour low tide for tickle crabs and sand dollars. No luck with the sand dollars this weekend. 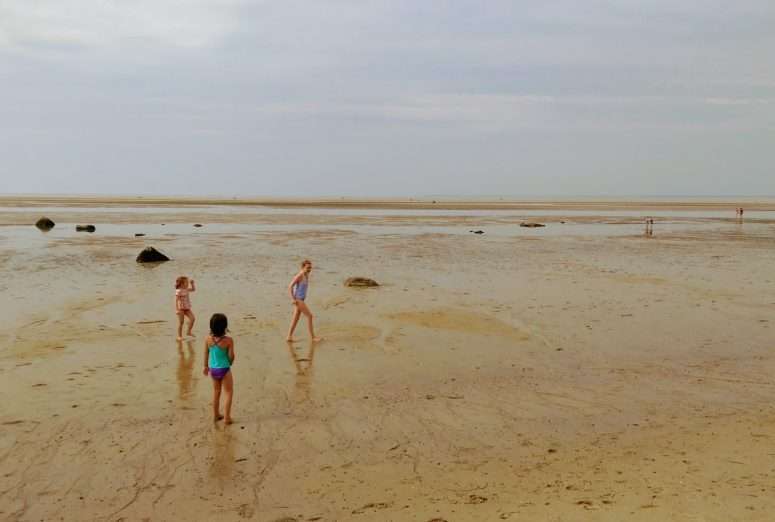 We tried to explain to them that people were probably paying good money to have black Cape mud smeared on them at a spa nearby. The girls didn’t quite understand that concept, but they enjoyed the mud nonetheless. 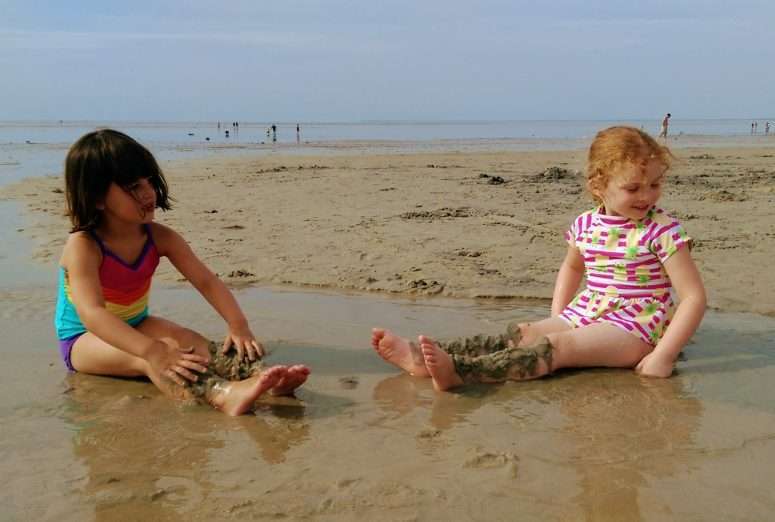 We took the money we saved on a spa trip and used it for some beachside boat drinks. Why should kids have all the fun on the beach? 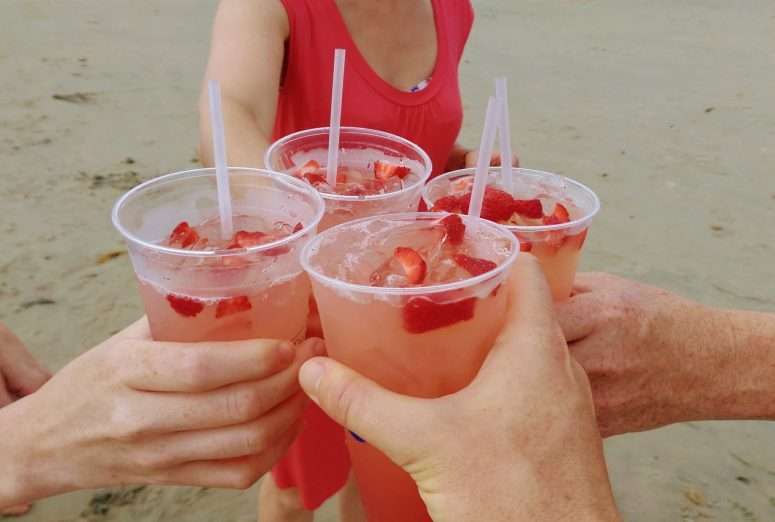 After a packed day of actives, it was time to catch the sunset, grill some pizzas, play some cards and call it a night. 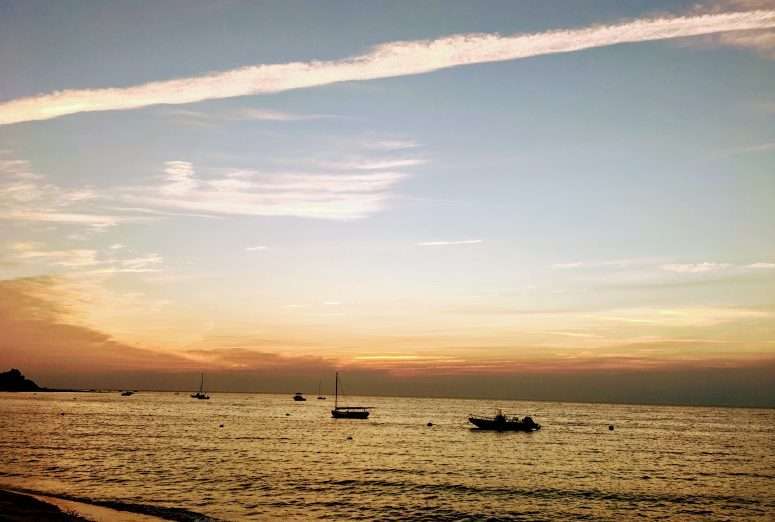 Friends, sand, sun. That sounds like summer to me. No wonder Ally could hardly wait.