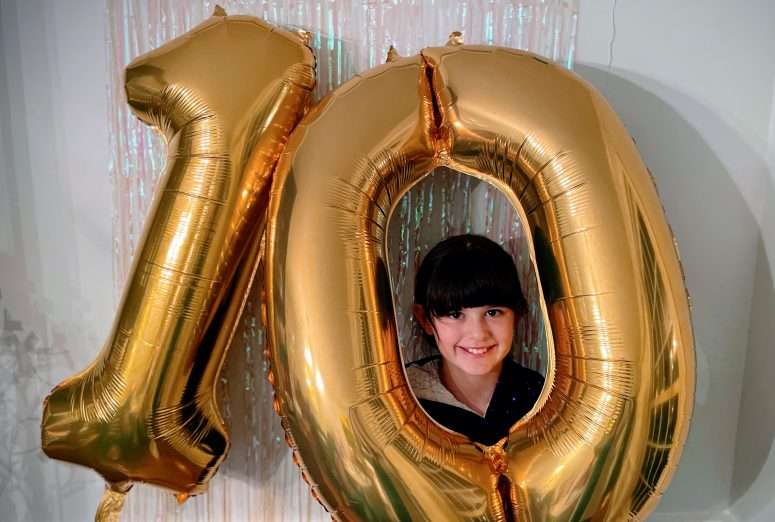 A reminder to myself from the inimitable Dear Abbey as the holidays creep closer. As the boxes pile up on the front step and the girls make last minute changes to gift lists and we worry we’re not giving them enough and somehow giving them way too much.

“If you want your children to turn out well, spend twice as much time with them, and half as much money.”

Money can make things easier, no doubt, gifts might make them temporarily smile, no doubt, but there is no substitute for that garbage time.

This Saturday was all about Ally. Her birthday is not until Tuesday (as she will remind me throughout the day that she needs another cake) but Saturday was her party with some friends from school.

She started off slow. She was still recovering from her Friday night performance at the town tree lightning.

Thank you to everyone that came out to support her, or stopped her afterwards to say congrats, or sent us videos. We had the event covered from every angle.

She decided to try out and audition for this all on her own. She had way more guts than I did at nine. And a much better voice.

If you missed her or just want to relieve the moment, here it is:

While Ally woke up, I was out on a run and couldn’t be happier that the a refurbished Tickle Zone was back in effect.

The calm before the birthday storm. We were keeping it mellow with just a handful of girls over, some pizza, a craft, and a movie.

Turns out I might have been a little naive in thinking six sugar-rushed elementary school girls could ever be mellow.

We made some breakfast egg-and-cheese sliders to take over to a USA/NED watch party.

This is a super easy brunch/tailgate food to bring along. Can’t go wrong with butter and King’s Hawaiian rolls.

I didn’t know how much I was missing blue cheese stuffed olives in my life.

The sliders paired pretty well with the brunch cocktails. Sadly, this was the highlight of the watch party.

I like this photo because you don’t even need to see her face. Her slumped shoulders say it all.

As you can imagine, my soliloquies on deliberate practice go over about as well as my treatises on flash cards.

And to think Cecilia still has a year or so to go before she hears my speech about the value of knowing how to drive a manual car as a life skill.

I can only hope I’m planting seeds for the future.

I imagine that quite a few of these girls now have a collection of holiday-themed tree ornaments made from Ally’s past parties. The Dollar Store never disappoints!

Ally requested the Sicilian sheet pan pizza for her party, which was flattering that she finally appreciates the homemade pizza, but also a bit of a challenge in that not all fourth grade girls are familiar with it.

“This pizza is weird!”

They did not nearly have as many questions or objections to the homemade skillet cookie dessert.

By the time Elf and popcorn were made, I had retreated upstairs.

Turns out I didn’t have the endurance for a ten-year-old ‘mellow’ party.

If we started with Dear Abbey, we might as well end with Dr. Seuss.

“Today was good. Today was fun. Tomorrow is another one.”

See you at the Angel Run? Where I’ll have revenge on these elementary school kids but still get out kicked by a high-schooler.