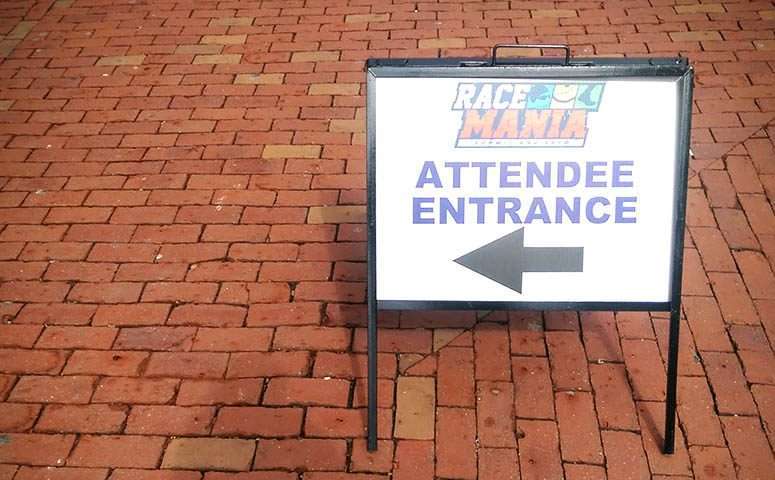 I drove into Boston on Sunday morning to attend Race-Mania, which has become the unofficial kickoff to the endurance season in the Northeast. It might not be spring yet, but you can at least sniff it. Time to start cleaning gear and firming up those race plans for the year. No better way to kick-start flagging motivation or find an inspiring race or new piece of gear than an expo dedicated to all things endurance racing.

Training for endurance sports can often be a lonely pursuit, even if you’re on a team or have a coach, so it’s always nice to emerge from the training bubble and mix and mingle with other people that think about run cadence, single versus double leg power meters or what flavor of gel is best at mile fourteen of your run. You are not crazy. You are not alone. You are just an endurance athlete.

Registration and Badge Pick Up

If you are not familiar with the Race-Mania expo (formerly Tri-Mania but with a new name and expanded focus this year) it is designed to educate, equip and inspire endurance athletes of all levels at the start of a new season with a day of speakers, seminars, clinics, competitive events and a vendor expo with 80+ exhibitors.

For the second year, Race-Mania was held at the Boston University athletic center. While it still could use a little more space to spread out (more on that in a minute), I still vastly prefer this venue than its old home at MIT, which always felt dark and cramped no matter what they did and was more difficult to get to overall (at least for me).

With the name change also came the first ticket fee for attending. Previous years it was free all day and if you registered early you received a swag bag. This year it was $5 dollars for an all day pass or still free if you attended after 2 pm. Honestly, it’s a smaller local company that puts on regional races and the $5 bucks didn’t bother me. The water bottle and free products like CliffShots in the goodie bag were worth more than that. It didn’t feel like a money grab and for all the things offered at the expo, it was worth the price of a couple of gels if it keeps this event in business.

While they had you meander around the building to the back entrance (probably to avoid overwhelming the rec center entrance), the check-in/badge pick-up was quick and painless. I was there soon after it opened, so maybe the line backed up some later in the day, but the volunteers had tablets and quickly looked up your name and passed you to the badge people.

Unfortunately, the swag bag pickup did not go as smoothly. This is my fourth or fifth time attending and the swag bag pick-up has always been the biggest issue. The line is always long, the poor volunteers are working off paper sheets and scrambling to find the right one. It’s just poorly organized and time consuming. Most people head there after entering, so it’s not the greatest first impression. I’d suggest, with the addition of the badges this year, just putting a small sticker on the badge at pickup if they person is one of the first thousand and eligible for a bag.

After waiting in line for twenty minutes, I received my freebie bag and started walking the expo floor. With the new name, I assume the organizers are looking to broaden out the event beyond a triathlon focus. This year, that was most apparent in the seminars and speakers. It was not really reflected yet in the exhibitors on the floor. Having attended numerous previous years, many booths were familiar to me with a few new ones mixed in. Overall, it’s a mix of races or race series, coaching and teams (seemed to be more here this year than in the past), big fitness brands, various apparel sales and nutrition products. 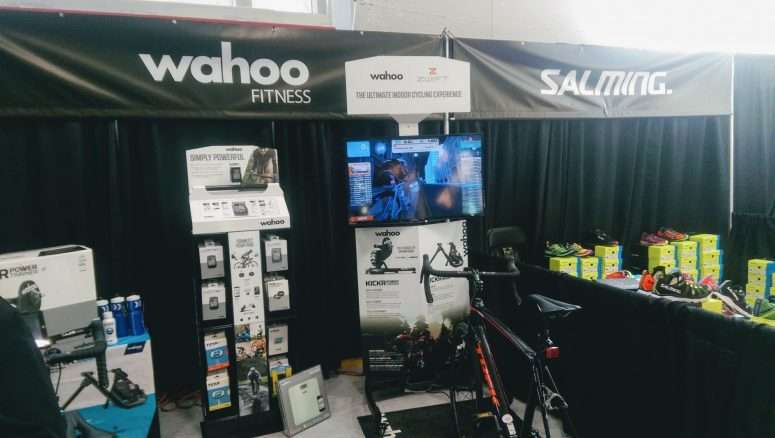 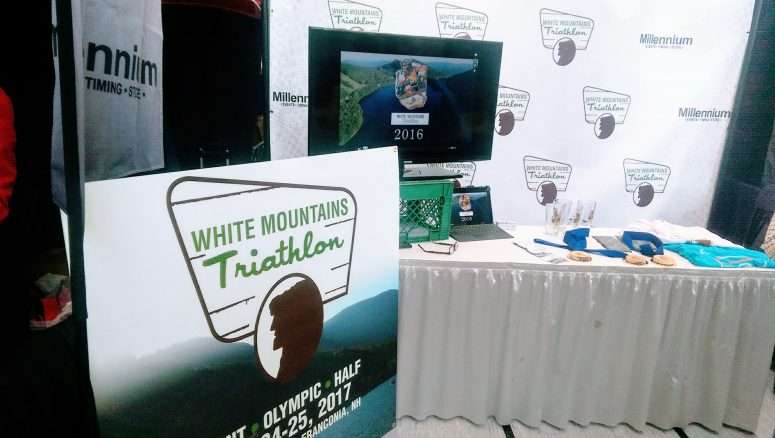 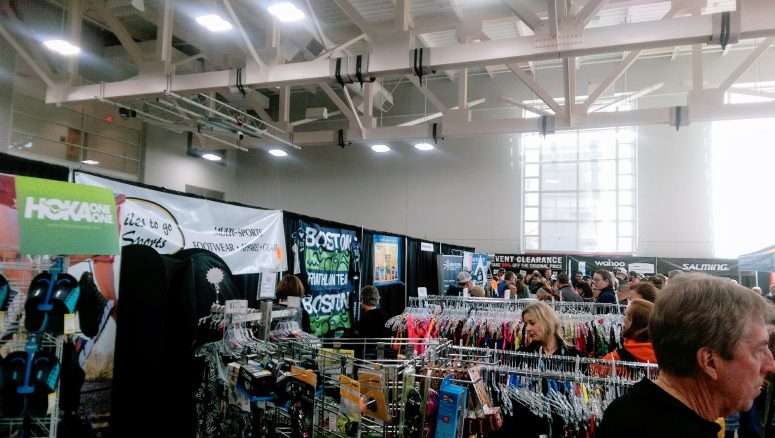 After nabbing a few samples and info cards from various races (my calendar is full this year, but there’s always next year to plan), I checked out the bike competition for a bit. This competition was right on the expo floor and had pre-registered people hook up their own bikes to CompuTrainers for a simulated 10k race. There were some people pushing serious watts. It would be nice to get the “race” into more of a Zwift format as watching little rectangles move across the screen isn’t terribly exciting. Imagine those water gun pony games at a carnival. 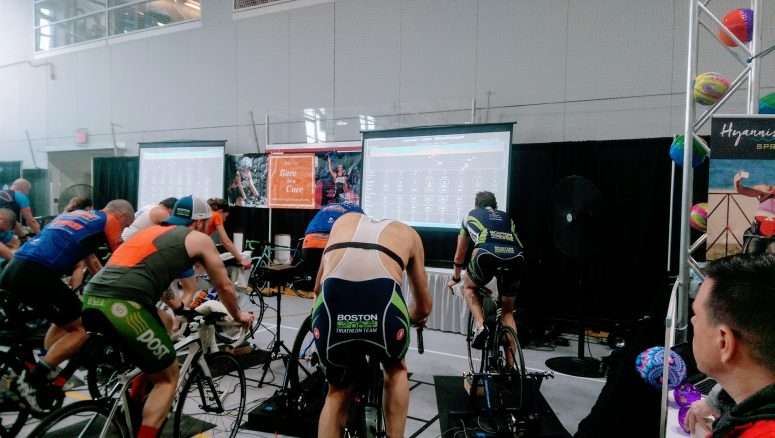 In addition to the trainer time trial, an indoor triathlon and team relay were also available over by the pool. In the past, I know, they’ve also sometimes offered a 5k race and a swimming relay event.

After a few more laps of the expo floor to make sure I didn’t leave a good free sample behind (I didn’t, but did score a a few bike tops and a tri top all for under $75 which I count as a solid deal- and again worth the $5 bucks), I headed over to the function rooms to catch a few seminar talks.

With the $5 all-day pass, the seminars were all free and ranged over a variety of topics and subjects. Throughout the day the event also offered various hands on clinics and workshops, such as a Total Immersion swim lesson or Chi Running Clinic or a yoga session for triathletes. Some of these clinics were free, so required registration and an additional fee.

The keynote speaker this year was Ryan Hall, but given the time of day I was there, I had earmarked two other seminar sessions to attend: Keys to Maximizing Movement and Running Injury-Free by Dr. Jordan Metzl and How You Can Master Running For Triathlons by Mark Allen.

Metzl’s The Athletes Book of Home Remedies is my go-to reference book for identifying or diagnosing those little aches and pains that crop up in training, so the opportunity to hear him talk in person about proper technique and form for injury-free running was perfect for me. As for the second one, I’d basically take the opportunity to listen to Mark Allen talk about anything triathlon.

As I waited for Metzl’s talk to start, I caught the end of the prior talk on obstacle course fitness and one theme became apparent from this talk and the two full seminars I watched: there wasn’t enough time. It was apparent that all three presenters were used to having much more time and were struggling to pace and fit their points into a half hour or less. It would be nice in the future to give people at least 45 minutes.

I really enjoyed Metz’s talk and definitely wish he had more time to go into some of the studies and research that backed up his points on proper form and characteristics of of healthy runners. I will likely check out his Running Strong book which is a deeper dive into this topic, but his overarching theme was that pain is O.K. and comes with the territory of running or working out, but pain that changes your bio-mechanics is definitely not O.K. Learning to distinguish between healthy pain and from something more serious is key for endurance athletes to avoid bigger injuries.

While he stressed there is no best way to run, his key bio-mechanics for runners to focus on to stay healthy were stride length, arm swing, cadence and foot mechanics. All of these put together correctly can reduce ground loading forces which put the body under stress and can lead to injuries. In studies, if you can get your cadence up to at lest 168, your likelihood of injury drops dramatically.

After proper bio-mechanics, his other key characteristics for a healthy runner were strength training (he was a big proponent of plyometrics), following a training plan, nutrition and the injury recognition I mentioned previously.

Again, because of the time constraints, it felt like a lot of information was rushed or had to be skipped, so I hope they can allot more time to speakers in the future.

Turns out, Mark Allen’s talk was more a career retrospective and what it took for him to realize his running potential in the Ironman, than any practical talk about triathlon running. It was clear Allen had given this talk before and he delivered it really well. He’s recounting and use of the Dave Scott cottage cheese anecdote (pretty well known to Ironman fans) was still great. So while practical tips for age groupers were thin, it was still fun to listen to a legend kick back and tell stories of his time on the Big Island.

Even with introduction of a registration fee this year, this event remains a bargain and a great way to see what the Northeast endurance scene has to offer. In just a few hours, you can check out a variety of races, catch some talks from industry leaders, pick up some discounted gear and even get a workout in if you want.

It still remains a little bit cramped in the BU space, so plan to go early or late and while many vendors repeat year over year, there is enough turnover and new topics to warrant attending each time. I look forward to how the organizers will broaden the focus and topics in the future.