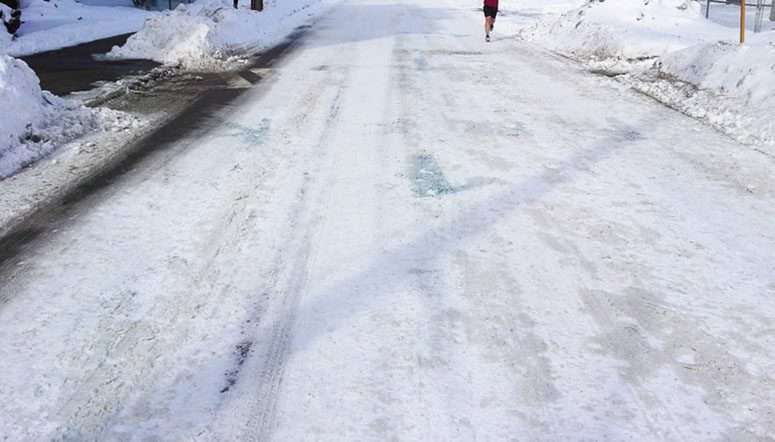 This is the second year in a row I braced myself and signed up for a road race in February. And for the second year in a row, snow derailed the race. Last year, we had a snowstorm raging the day of the race and it was ultimately (and wisely) canceled. This year, we had a snowstorm the day (and night) before the race and, while it wasn’t canceled, it was significantly altered. The Old Fashioned Ten Miler turned into the Old Fashioned Sorta Five Miler. Still, the opportunities to race in January and February are pretty slim in New England and you have to take what you can get.

Held in Foxboro, MA, about 20 miles south of Boston and near Gillette Stadium, the Old Fashioned Ten Miler is put on by a local running club (the Wampanoag Road Runners) and includes a 5k event along with the 10 miler. This was the 19th edition of the race, and until last year, it had never been canceled due to weather. The 10 miler tends to attract the Boston Marathon trainers that are itching to either get outside and off the treadmill or get a little competitive workout in.

Packet Pick Up
Given that the running club appeared to be getting the use of pre/post indoor facility donated by a local business, there was no prior day pickup available, but given the temperatures and wind chill  I was happy to have the race day shelter in exchange for slightly longer lines to pick up the number and chip. Even given this, there were plenty of volunteers, so wait time was minimal. I arrived 45 minutes prior, parking was ample and had my bib in hand with more than a half hour to spare.

I did find it amusing that the indoor bathrooms were reserved for the women and generated the typical pre-race lines. There were, however, plenty of outdoor porta-potties available for the men (and brave women) with no lines.

Pre-Race Warm Up
As I mentioned up top, there was significant snow the prior night (this was in addition to two other storms in the past week) and the race start was actually pushed back from 11 am until 1 pm in the hopes that the roads might improve. No such luck really and in retrospect, it might have been better to run when the snow was more hard packed as the softer, slushier snow made for even more challenging conditions.

It was clear warming up that the both the ice-crusted road surface and the wind (a steady wind made the 28 degrees feel considerably cooler) were going to be major factors.

Word soon filtered through the crowd that the 10 miler was being shortened as large parts of the course weren’t safe or clear enough to run.

During my ten minute warm up, I noticed my heart rate never really settled down toward anything normal. It was holding in the 160’s when the effort should have been down in the 110-120 range. I’m not sure if it was the stress of the situation or just not being acclimatized to running outdoors. Either way, five instead of ten miles was looking better and better.

The Race
The course took place mainly on secondary roads between two main avenues. The avenues were clear down to pavement, giving a minor respite from constantly watching your feet for ice, but all the secondary roads were covered in snow and ice making traction a real challenge. This is where altering my stride last year during marathon training to a more high cadence tempo came in handy and in looking at the post-race data, I averaged 178 steps / min, higher than normal for me, but the quick footfalls certainly helped me navigate the snow and keep my speed up.

I’m normally a pretty steady pacer, but even with my quick(ish) stride you can see by the wide swings in the chart that the conditions were closer to adventure race than road race. The course was mostly flat and I think the varying road conditions were the cause for my up and down mile splits.

The (now) five mile and the 5k started at the same time and the 5 miler would essentially be two loops of the 5k course. The field wasn’t terribly big, or people self-seeded correctly, so the start wasn’t really a problem, nor was the first lap. By the second lap, however, the snow-covered roads were pretty churned up by both sets of racers and had taken on a slushy, sand-like consistency that started chipping away at my pace and my achilles.

Post Race
Instead of the standard technical shirt with your registration, as befitting the month, participants received a fleece blanket and a nice, solid medal upon finishing.

The post-race spread included small bags of Craisins, brownie brittle, chicken salad sandwiches, chicken soup, mac ‘n cheese, bagels with peanut butter, and orange slices, plus water. My only complaint would be to have a veggie option. The soup looked good and I would have loved a veggie-only cup.

Skipping most of the food line did have its advantages as I made it to the one of the two free roller massage tables before any lines formed and got what felt like an extra long rub down.

Pros
A rare race in February.

Cons
A rare race in February.