There was a point in the race at about mile 24 where the crowds thinned and we were running by a small pocket park that fronted the Merrimack River. Gravel paths weaved around low shrubbery and birch trees, all of it offering a nice view of the riverside foliage and the city of Lowell beyond it. It seemed like a nice place to spend some time. You know what else it had? Benches. Smooth slats of wood, warmed by the sun that promised solid support for some very tired legs. It was a tantalizing siren. The skinny guy in the blue singlet, that I had been following for over twenty miles, veered right, sat on the first bench he passed and closed his eyes. He didn’t look like he was moving anytime soon.

I didn’t blame him one bit.

Being a first time marathoner, if there was one thing I was naive about it was those last three miles. Holy hell. Nothing in training can really replicate the fatigue, both physical and mental, of those final miles. If it did, I’m not sure how many people would keep signing up.

But first, let’s start at the beginning.

Pre-race
I stocked up on sleep in the days leading up to Sunday, but actually didn’t find it too hard to sleep the night before. My only regret was that I missed the Red Sox clinching win, but I’m sure, even with the sleep stockpile, I would have been regretting staying up when that alarm hit at 4:30 a.m.

I had packed my gear bag the night before so the morning was more about making sure I stuck to my routines and took in the proper nutrition: 1 cup of coffee, rice cereal with honey and almond butter and then water. I brought my pre-workout drink in the car.

I did not repeat the mistake of the last month’s harried half marathon start. We arrived at the race well before the sun and had plenty of time to get oriented. We actually might have been a bit too early. Parking in one of the garages suggested in the race information, but not the one directly opposite the course, we were left on the empty, downtown streets with little direction of where to go. We weren’t the only ones either. Small packs of other people in spandex and running shoes were also wandering the pre-dawn streets. Eventually, with some trial and error, we worked our way over to the race start, but a few prominent signs would have been helpful.

Thankfully, they opened the first floor of the high school as a staging area because it was still quite chilly. I wish they had opened the locker rooms too, as the bathroom lines,even this early, quickly grew lengthy.

The bag check was quick and easy. Maybe too easy as my tag ended up getting ripped off causing some confusion in retrieving my bag later at the finish area. While the start and finish were in the approximate same area, it wasn’t exactly the same, so volunteers were taking bags and tossing them into a U-haul before driving them over to the finish.

After the bathroom line and bag check, the sun had come up and I ran through my warm-up. Plenty of space (but little grass if you wanted to lie down to stretch) to warm up and jog around the starting line. Soon enough it was time to line up and go. The race was self-seeding, no corrals, but there was plenty of space and little jostling or pushing for position. 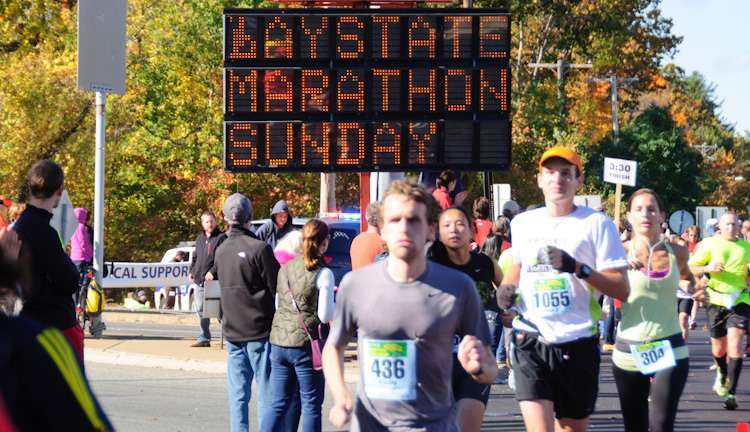 The Race
One oddity to note that I’ve never experienced before in a race occurred right at the start. It was noted that the roads were not closed, but I did not expect a police van with siren blaring to come driving straight into the crowd about 400 yards into the race when both the full and half marathon were together and blanketing both sides of the road. I hope it was important.

The marathon was essentially two big loops with little spurs at the start and end to get you back to the Tsongas arena area where the race started and ended. It was just as flat (and for some, not me, as fast) as advertised.

If I had any complaints about the race, it would be on the outward half of the loop. It was very congested (with the roads open they coned off the shoulder and a little extra for us). They also rather inexplicably placed these low directional signs for the marathon/half marathon split right in the middle of the course causing many folks to hurdle, swerve or crash into them. Finally, the road itself in this area was very chewed up (pot holes, cracks, uneven pavement) which caused a couple close calls on turned ankles. It all didn’t make for easy running. Once the field thinned, it was less problematic on the second loop, but still less than ideal.

Fortunately, things improved on the back half. The commercial district, scrub grass and railroad tracks fell away and we had mostly new pavement and foliage-laced river views to carry us along until we hit the mass of spectators at the next bridge and the turn for the start of the next loop.

I had an average day overall. I never really felt terrible (last couple miles excluded) but never really felt great either. On a few of my long runs I’ve found that sweet zone where clicking over a 7:40 mile after mile just feels so easy. Never felt that on Sunday. I had hoped to keep things in cruise control, slowly lowering the pace, until mile 20 before I really started to dig in and concentrate, but I felt myself laboring probably by mile 15 and was never really able to put in a kick at the end. I didn’t totally falter either. Using the 3:30 pace group as a guide, I kept pretty even splits throughout the race.

On the nutrition side, I think I could have done better. I used two gels, ate one date and one Clif block, about half the food I was carrying. The aid stations were perfectly spaced about every mile and half to two miles and had water and Gatorade at every stop. I think I only skipped one and usually took Gatorade over the water. I think those extra calories gave me just enough to finish. The one fail moment during the race was my salt/electrolyte pills getting stuck in the container. I was able to get two out, but two remained jammed no matter what I tried. I missed that extra salt in those last miles.

One other thing that really messed with my mind, even though I knew it would happen, was the ‘extra’ running you do during the marathon. A certified course is measured so that the absolute minimum you can run is the race distance. Most entrants will run more, sometimes significantly more. I tried to be careful and keep to the side, but I still ended up running 26.4 and trust me when my watch hit 26.2, my body really, really, really wanted to be done. 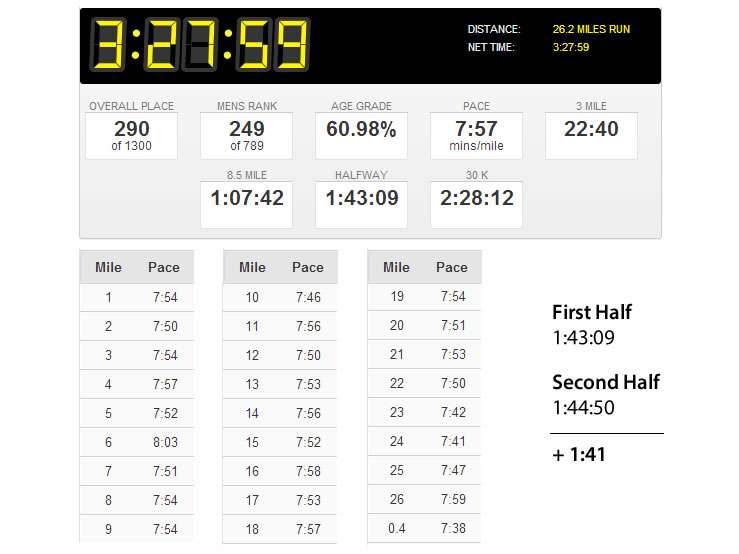 The Results – Local Class all the way!
As I mentioned above, it was a solid day. I executed most of my plan and though I couldn’t finish quite as strong as I would have liked, my steady splits over that distance, especially for a debut, were a sort of achievement in and of itself. Or so I tell myself. My fastest mile was 7:41 (mile 24 at that!) and my slowest was 8:03 (my only mile over 8 minutes and I blame my fussing with getting my dates unwrapped from the pesky Saran wrap). You can see me start to push (as much as I was able) and drop the pace to the low 7:40s at mile 23 and I wish I could have held that through the end but mile 26 included a diabolical section of banked, curved road that had my feet screaming and sapped whatever little energy I had saved for the end.

I did run a slightly positive split by 1:40 but can’t work up the energy to chastise myself too much for that.

You’ll also notice this race gives you an ‘age grade’, something I haven’t seen before, but is apparently more common in Europe. It’s supposed to normalize the results across age and gender to better allow runners to compare against each other (like people that run these things really need another competitive stat!). I received a 60.98%. The 60-70% range rates as ‘Local Class.’ I’ll take it!

Post-race
Call me superficial, but if the race itself is well run and organized (and even for charity) but they stiff you on the post-race refreshments, it’s a negative in my book. This race did not skimp. Rarely has something tasted so good as the salted vegetable soup I had at the finish line. They were also fully stocked with bananas, water, protein bars, PB&Js, soup and soda. There might have been more, but at that point I really just wanted to find a bench.

Pros
This race is advertised as for runners, by runners and it’s an apt description. There’s very little fluff that you might find with more for-profit races (the expo was practically non-existent), but what’s left is really what matters.

Cons
The only complaint I have is what I mentioned above about the roads, congestion and rather hum-drum scenery of the first part of the race.

Recommendation
If you are looking to post a PR or pick up a BQ, then this is probably your best opportunity in New England. Its very flat with only a few gentle rollers. The pace groups are great and it attracts a fast field if you are looking to follow some feet.