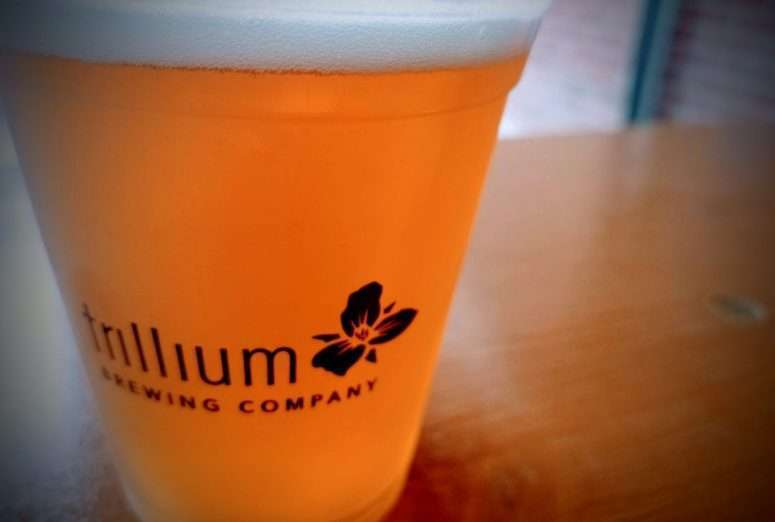 One silver lining to being limited to shorter distances is that you can race more. You might find yourself racing four times in five weeks. I love racing. I love the nerves and possibility of the start line. I love suffering and pushing myself, at least after the fact.

But even I’ll admit that four in five weeks might be a bit much. And I have two more weeks coming up of races. I’m going to need a break before I get injured or burn out. But back to last weekend. This one wasn’t my fault. Really. I hadn’t scheduled this one on the calendar. A friend who is not quite as obsessed with running and racing as I am suggested we try this race and, to support him, I agreed. Turns out the Trillium 5k is pretty popular and parking is pretty limited at the brewery so entry is a lottery system. You know the end of this story. I was selected. He was not. Therefor, four races in five weeks.

At least the weather was cooperating. After a warm and humid Saturday that would have made running even a 5k a sweaty diabolical mess, Sunday dawned cool and overcast. I had no wedding hangover excuse this week, so after my traditional and now partly superstitious Chrisse Wellington breakfast of rice cereal, nut butter and a banana, plus coffee, the whole family jumped in the car and headed a few towns east to the Trillium Brewery. 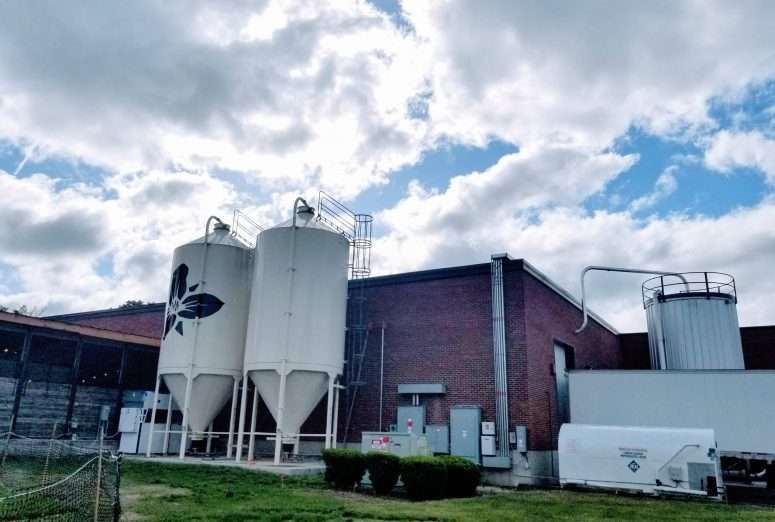 Trillium Brewery is a local brewery started in 2013 with locations in downtown Boston, as well as a facility in Canton, a suburb 30 minutes south of the city. They started a 5k last fall and it proved to be very popular, so they’ve doubled down with a spring and fall event this year.

The race is run from the Canton location, starting and ending at the brewery. Given that the facility is located in an office park, the amount of people they can handle is limited, so entry is through a lottery and capped at 400 people.

The registration fee was on the higher side, $40, for a 5k, but I will say you definitely feel like you get your money’s worth. The fee includes a nice t-shirt, a beer glass and a free beer after the race, plus a finisher’s photo and some quality post-race snacks. You are also supporting a worthy cause in Family Reach. 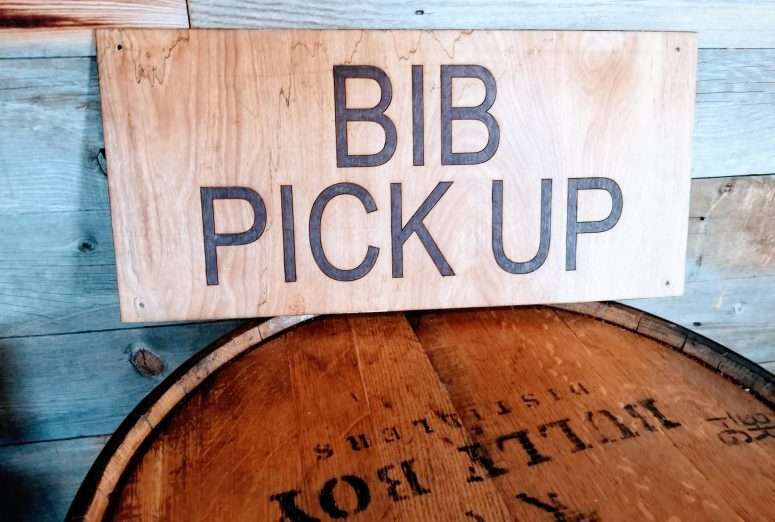 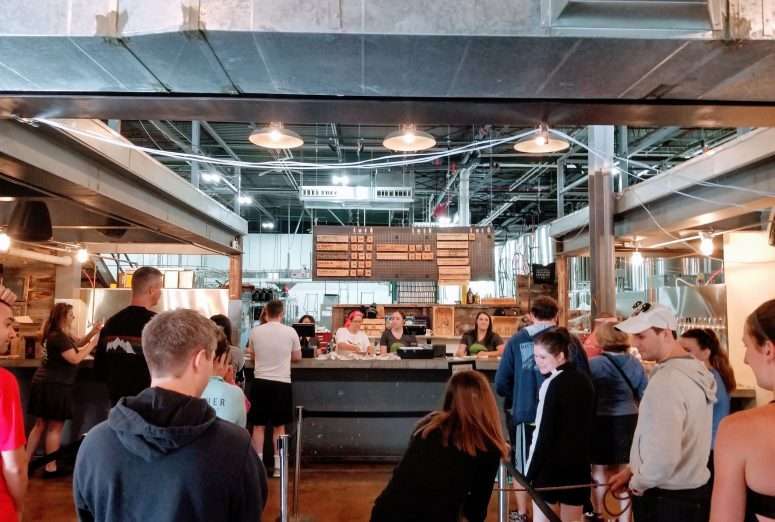 Packet pick-up was inside the brewery and split into the two traditional lines A-L, M-Z. The line wasn’t super fast, but wasn’t super slow, either. The one oddity was the pins for the race bib were enormous, like cloth diaper sized, and probably left permanent holes in my shirt.

One other note was that the bathrooms inside the brewery were open, so, along with the port-a-potties outside, the lines were always short to use the restroom. My kids were very happy to have indoor plumbing. 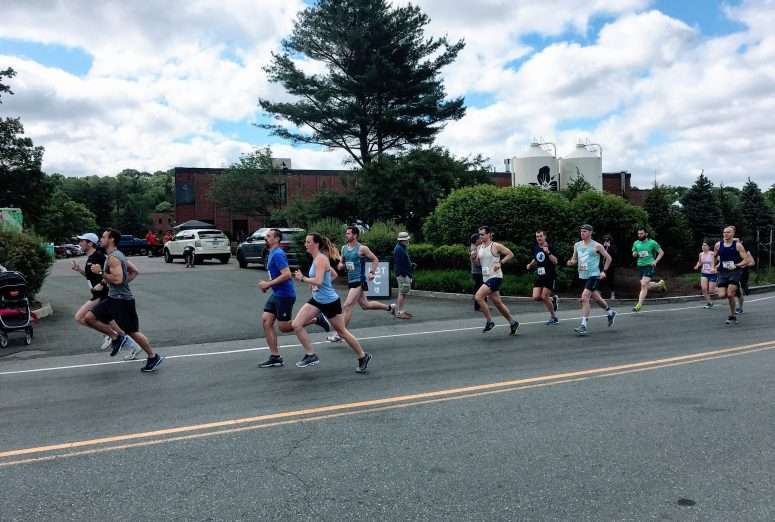 The race started about 8 minutes late. You might think I’m being persnickety about that, but when you are trying to time your warm-up to be ready to go out hard, especially is a short race like a 5k, it matters. I had a good 1-2 mile warm-up and was sweating when I lined up, but was cool and not sweating when the race did start.

And it started abruptly, too. After some brief announcements, someone with a mic basically said, GO! All the participants were about twenty yards behind the timing mats. It was a little odd, but we’ll chalk it up to it being only the second time it’s been run and with the chips it didn’t matter too much. I guess I got to re-warm-up for 5 seconds before the timer started.

The first half mile was running out of the office park and it quickly became apparent that there were 4 or 5 guys that were way out of my league. I let them go without a second thought. It would be suicide to try to keep up.

One common thing I’ve noticed is that all my 5k’s this year have started strong, but limped to the finish. I hadn’t run a negative split all spring. I really wanted to try to pace this one better and finish strong. I told myself I’d be fine with any time as long as I felt I finished strong.

As we exited the office park and onto the main road we hit the hill. To be fair, the race organizers were very upfront about the hill. Doesn’t make it any easier to run. The second half mile was all uphill and it strung out the front of the pack. I settled in behind one guy and just tried not to blow up my legs before the first mile marker. 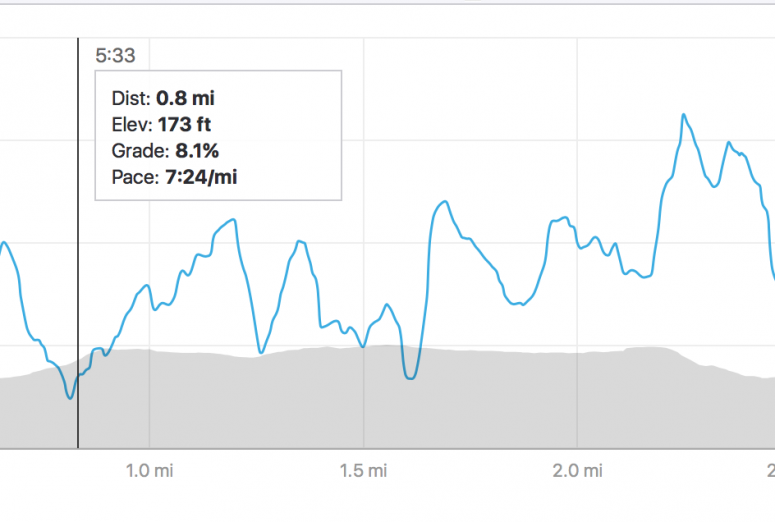 The second mile was flat before we would loop around and get that downhill in the third mile. Here, again, I just tried my best to measure my effort and get my legs to turnover after the hill in mile 1. I stayed on the shoulder of the guy I had followed up the hill. I few times I tried to take the lead and pace a bit, but he didn’t want to let me pass and would surge back ahead. Okay, then.

The second mile looped through a residential section and included a water stop. I noticed police on the main road at the few intersections we passed. Traffic was never an issue. Pavement wasn’t butter smooth, but it wasn’t horrible. You had to watch your step occasionally, but I’d call it average for a New England road race. If I’m talking about the macadam, mile 2 must have been boring.

Time to finish strong. Earlier in the year at the HMEA 5k, which also includes a big downhill in the latter part of the race, I felt disappointed that I couldn’t really take advantage of it, just maintaining the pace rather than getting any free speed off the downhill. I was determined to change that outcome in this race.

I finally made a definitive pass of the guy I had been shadowing since the first mile. He didn’t respond this time and for once lately, I had people in sight in front of me to provide motivation and chase down. I felt like I was moving pretty good down the hill even if the gap between me and the two guys I realistically thought I could catch wasn’t shrinking that rapidly. I made it to the bottom of the hill and the entrance to the office, closer, but still behind both of them. 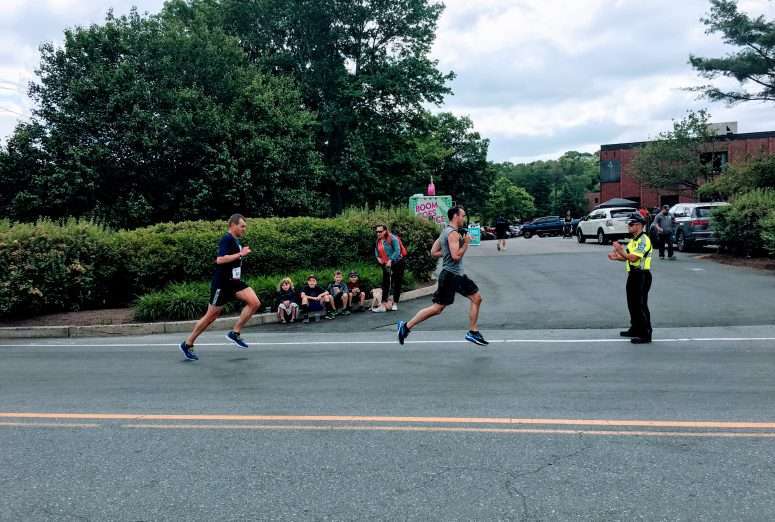 With a half mile to go, my mantra remained finish strong. I was able to catch one of the guys, who’d broken apart, with about 400 meters to go. I was closing fast now and actually feeling strong but was running out of real estate. I might have packed it in, but I heard my girls yelling near the finish and with a final push caught the second guy.

Overall: 19:39 (6:19 / mile), 11/318
One disappointing thing was there were no age group breakdowns. I don’t mind the lack of AG awards but would like to know where I stacked up against my peers.

As mentioned above, I was impressed with the post-race refreshments. There were bananas and water, of course, but also Honest Teas, Maple water, and Rx Bars. Those are some highfalutin snacks! And I am easily impressed, too. 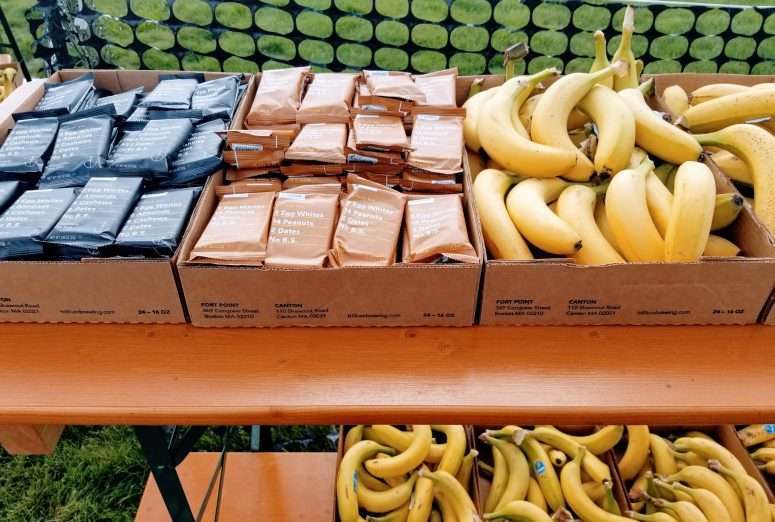 While the patio space and lawn outside the brewery are small, the race organizers packed a lot in. There were food trucks and food vendors to go along with the beer. Being fast, does have some privileges as the beer line quickly got very long. 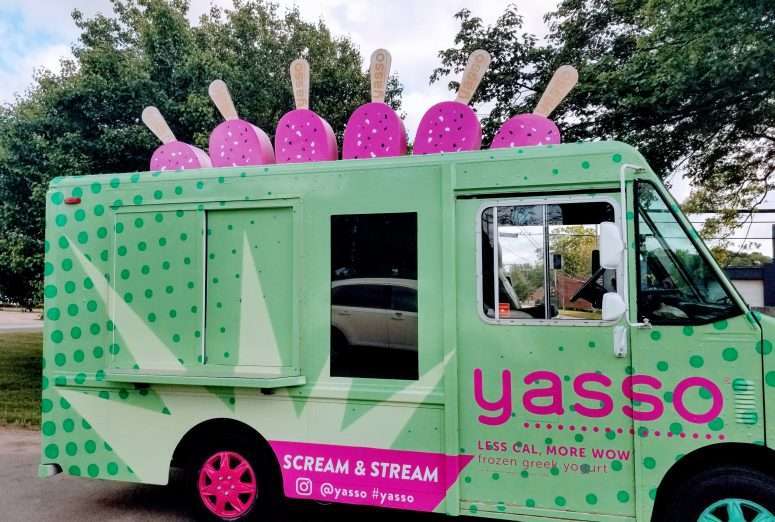 The girls enjoyed some yogurt bars samples and waffles (purchased) from two of the vendors, while I had a post-race egg burrito (purchased) to supplement those bananas and an Rx bar. There was also a coffee and pastry cart.

While we weren’t able to stay until the brewery’s retail space opened at noon (that might have been dangerous!), the post-race vibe was relaxed and very family friendly. You had to be careful not to trip over a dog or a toddler. 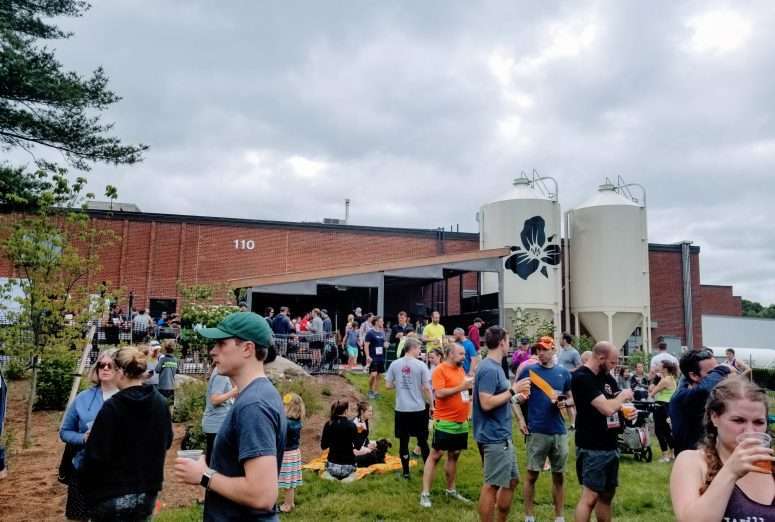 I can see why this new race is so popular. While the course is rather banal (given the location not much they can do about that), the organizers do a great job with all the rest of the surrounding race experience. Packet pick-up was smooth (though please change those pins!), swag was very nice and the post-race spread offered lots of options for everyone. Even with the high cost, I would think about entering the lottery again in the fall or next year in the spring.

I  was happy overall with my race. This is the best-paced race I’ve done this year (negative split) and also my best time of the year (top 5 5k time ever, I think). I finished strong, mentally and physically. It would have been easy to cruise in and not pick off that last guy.

That’s the last 5k until the fall. My plan is to try to use the summer to build up a better base so I can hold that speed and endurance throughout the race. Up next, a sprint triathlon and a 4 mile road race.