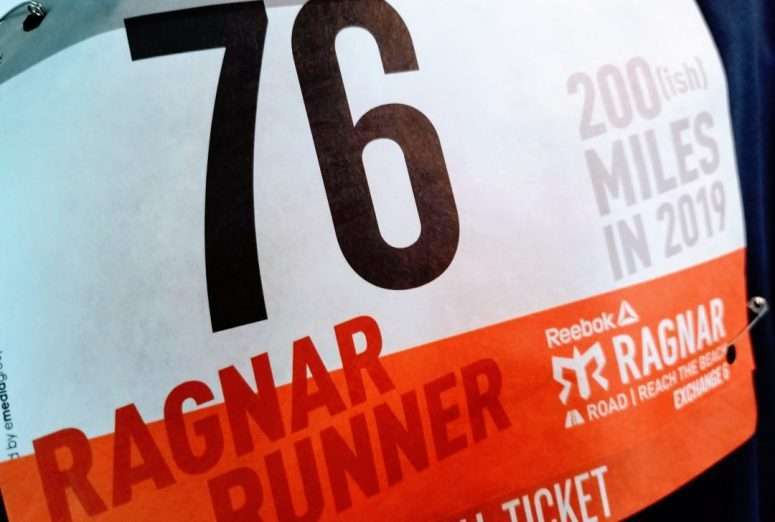 When you tell people you are going to do an overnight 200-mile relay race that involves traveling in a van with 6 other people for 36 hours, getting little sleep, running at 2 am, all while paying for the privilege, you are going to get one of two reactions: some will get a recognizable gleam in their eye and ask if there are still any open spots in the van. The others will openly question your sanity. One of the many joys of belonging to a local running club is that I saw much more of the former than the latter.

At six a.m. on a Friday morning, I met up with 11 other teammates just as excited as I was to leave responsibility behind for a couple days and just run, eat, (try to) sleep, and repeat during the 2019 RAGNAR Reach the Beach this past weekend. 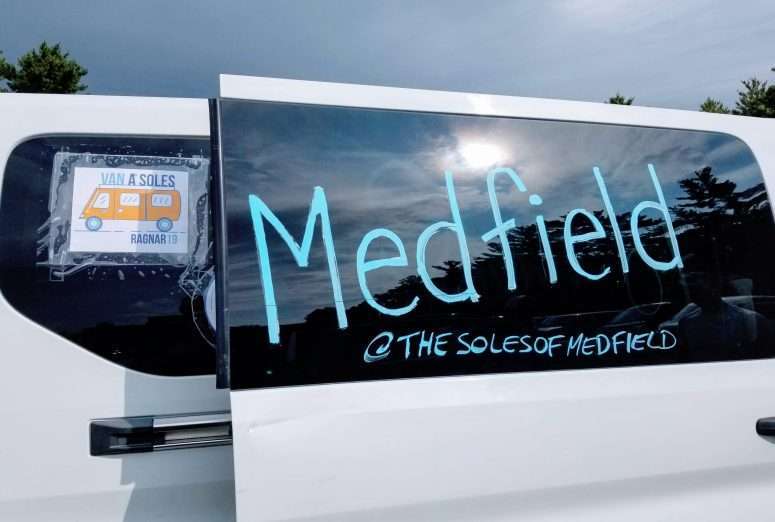 Your team’s start time is based on their cumulative 10k times. Our time put us in the group starting at 11:30 a.m. Late enough that we didn’t have to stay over near the resort but early enough that we were up and packing vans in the dark.

Two vans, six people in each van, plus their assorted running gear, food, and sleeping bags. Being a newbie, I was a little nervous about space but we had plenty. I was a little squeezed in my seat but I’m used it to with my height.

Now that it’s over, here is what I consider must-pack items for neck year:

It was about a three hour drive from just outside Boston to Bretton Woods. It didn’t take long for just about everyone to forget they were a Mom, Dad, adult with responsibilities and just immediately time travel back to being an immature teenager.

After a brief stop to pick up our last teammate (and use the bathroom – we were not in fact immature teenagers but mostly middle aged parents and frequent bathroom trips are now sadly a necessity), we soon started picking up other vans that were clearly headed in the same direction. 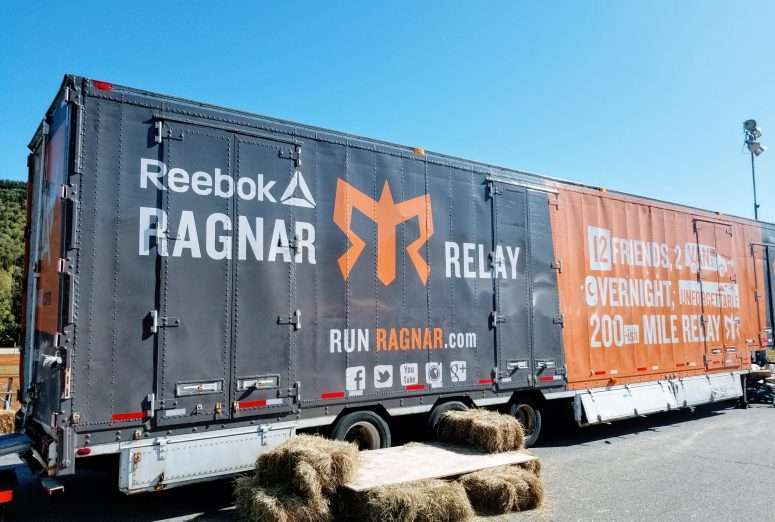 The entire team has to check in together and make sure they have enough safety vests for each member. Once it’s dark, you have to wear a vest outside the van. After checking in, you have to watch a safety video. They try to make it fun and I’ll admit it did make me at least smile a few times (think Southwest or Virgin airline safety videos).

Once you’re hand-stamped as watching the video, you can pick up your team swag bag (shirts, temp tattoos, bibs etc) and then prep to start.

Or at least the first couple runners can prep. I was runner #9 so it would be a long while until I started. I took advantage of the last indoor plumbing for awhile and then perused the vendors set up near the start (bought another pair of Goodrs). 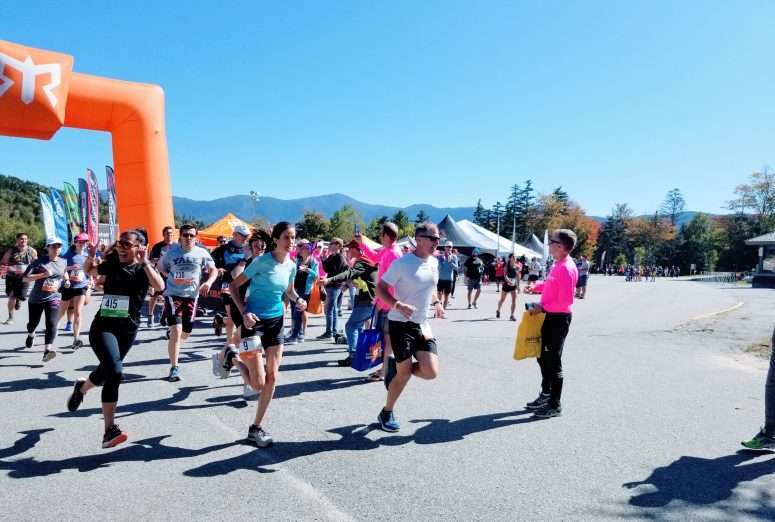 Groups of 10 teams start every thirty minutes to much fanfare and silly (often very awkward) introductions. The first leg is short but brutal up and back down one part of of the mountain.

We watched the first three legs before driving to the first major transition point between vans one and two. This first part, before you run your first leg, is the toughest. After the first leg, you are mostly recovering, trying to help your teammates, helping navigate the van, or prepping to run again. But this first part we were stuck in idle. All revved up but literally nowhere to go.

Finally, almost twelve hours exactly after we left that morning, it was time for me to contribute and run my first leg. Each leg is rated but after completing all three, I’m not completely sure how they came up with each rating. This first leg was just under 7 miles and rated moderate.

Of the three legs this felt like the hardest. Maybe it was the waiting and some dull legs. It was flat for the first 4 miles and then climbed pretty aggressively (+300 feet) between miles 4 to 6 before relenting with a downhill finish.

There was no van support (vans couldn’t stop – some towns have restrictions) on this leg and early in the race things are still pretty spread out. I was mostly alone for large portions of this leg. I think I passed six and was passed twice. The course is well marked and enough vans were passing that I never thought I’d get lost.

Thankfully, the weather was perfect for running, cool and sunny, and would remain so almost to the very end. 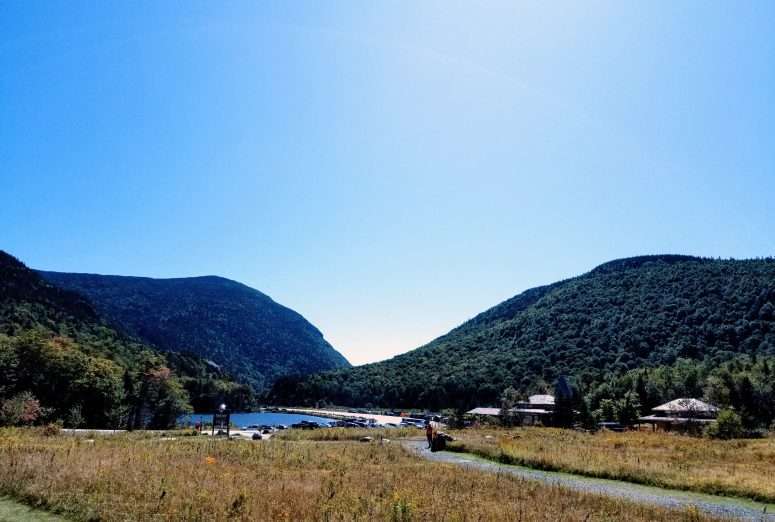 I was feeling ok and holding a steady pace even with the elevation gain, right up until the last climb then  a gimpy hamstring tightened up viciously and I had to walk and try to stretch it out a bit. It didn’t get any better but it didn’t get worse either. I was able to make it to the transition but was suddenly worried about the last two legs. You don’t want to have to unexpectedly add mileage to your teammates.

After the last three legs were complete, our van was done for an estimated five or six hours. The priority was hot food, preferably with indoor plumbing, and then try to sleep. We drove on toward the next big van rendezvous and tried to find a restaurant. This is were it helps to have people that have done the race before or who happen to know the area. We had both in our van.

Unfortunately it was also Friday night. The wait at the pub we stopped at was close to an hour. We didn’t have that much time to sacrifice. Sleep was more important. We headed further down the road (after using the pub’s bathrooms, thanks!) and found a take out pizza place. Perhaps not the best recovery food but any hot calories were good and we quickly polished off a couple boxes and some salads.

Then, with the van smelling of grease, cheese and sweat, it was time to drive to the exchange point and try to get some sleep. With about two thousand other restless, tired people.

It did not go well. I imagine this is perhaps what it’s like to try to sleep in prison. Just constant noise, interruptions and the low buzz of thousand of bodies trying to find some comfort in a high school parking lot. At least it wasn’t cold. 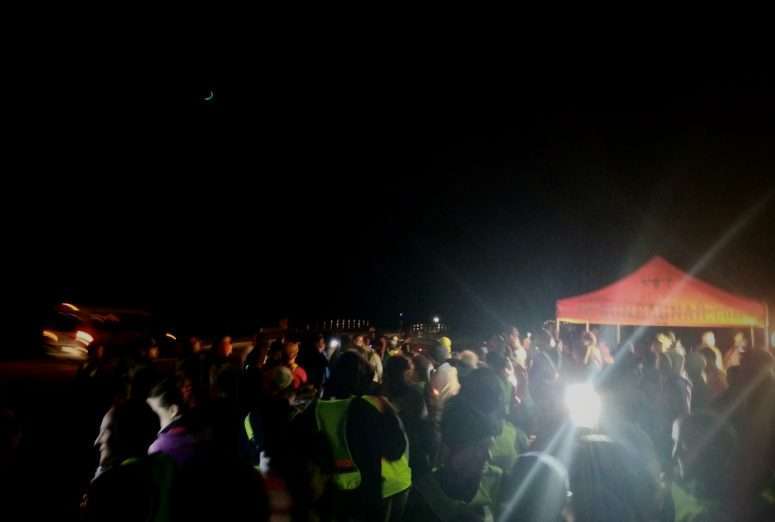 According to my watch, I did eventually fall asleep for at least a couple hours but all too soon it was time to pack up and get moving again. This is where RAGNAR earns it’s stripes. Everyone’s second leg is in the dark. My second leg came at about 2 am and was marked ‘easy’ even though it took place in the dead of night and included a two-mile grinding climb of almost 500 feet.

Despite all that, or maybe because of it, and with the nagging worry of my hamstring lingering, I just shut off my mind and ran. And it was magic. The moon was huge and bright sometimes making the reflective gear superfluous.

I started off mostly by myself, picking off a few random headlamps in the first mile but by the time I hit the big climb, I could see vests and headlamps running way out in front of me. That  gave me a boost. My hamstring had mellowed for some reason. I couldn’t push really hard but I could run without discomfort and that was enough. I started passing people in bunches and feeling like I could run until dawn (that probably wouldn’t have happened but it was a nice feeling).

This was a wild-card transition zone, meaning my next teammate and I could hand off the bracelet anywhere inside a 2 mile stretch. We split it down the middle and I was back in the van too soon.

I tried to hold on to that euphoric feeling for as long as I could but by the time we swapped with the van again I was getting that surreally tired feeling you’d often get when you were studying (or partying) all night during college. The next exchange point was again at a high school but this time we’d moved up in the standings (or skipped looking for a breakfast restaurant) and arrived early. Some of the high school boosters were working concessions and after a warm egg sandwich I retired to the van to try to sleep.

You could sleep inside the gym for free, which was nice but I didn’t have any padding for my sleeping bag. You could also pay $5 to shower in the locker room but I still had one leg to run and it didn’t feel worth it. The dude wipes had gotten me this far. They could get me through one more run. 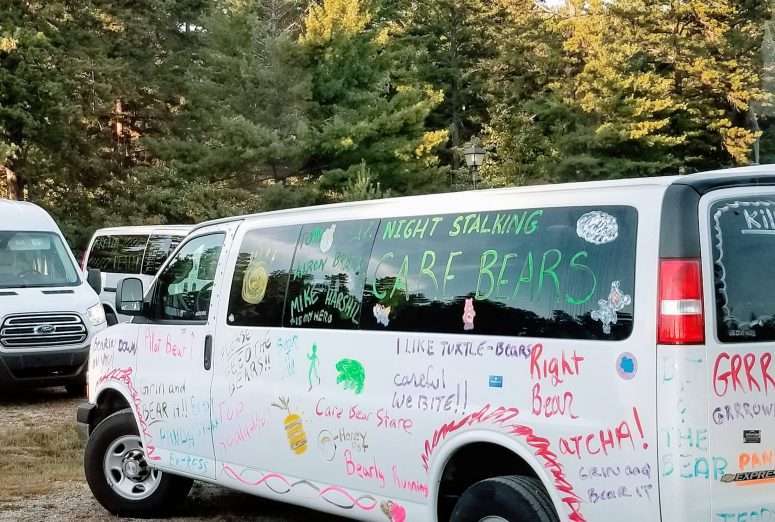 The shortest of all my legs (4.1 miles) and flattest (net gain 175 feet) this leg was marked ‘moderate.’ Go figure.

By this point in the race you start to recognize some of the teams around you that are about the same speed and ability. It’s not a race per se but you use what motivation you can to get yourself to the finish. We never saw the care bears from the van in the picture but we did become a bit fixated on one group in particular dressed up as cows. We really wanted to beat the cows. The cow on the leg before me was fast and they had the lead going into my leg. Catching the cow became my primary focus. And carried me through the one hill.

I caught the cow by mile 2 and the rest was just downhill green pastures to the finish. 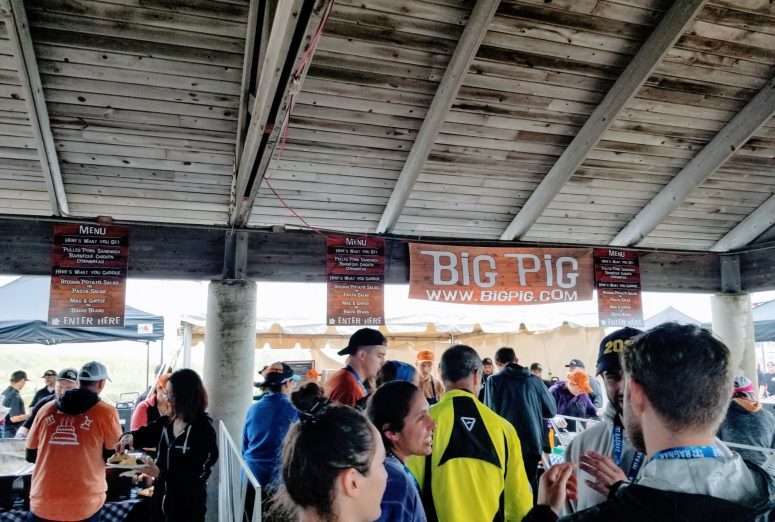 The finish at Hampton Beach is both the finish line for the final runner and the site of the party.

We hustled the van to the finish and waited for our captain to come running up the beach (I did not envy her that stretch!). When Jodi reached us, all 12 of us ran (limped) the last 100 yards to the finish.

Then it was time for celebratory beer. You’d think you’d get at least one beer free with a bib! There were other drinks were also available for free and BBQ. I was happy to find a separate grill full of two kinds of veggie burgers.

There were more swag tents, sponsors and giveaways in the finish area. 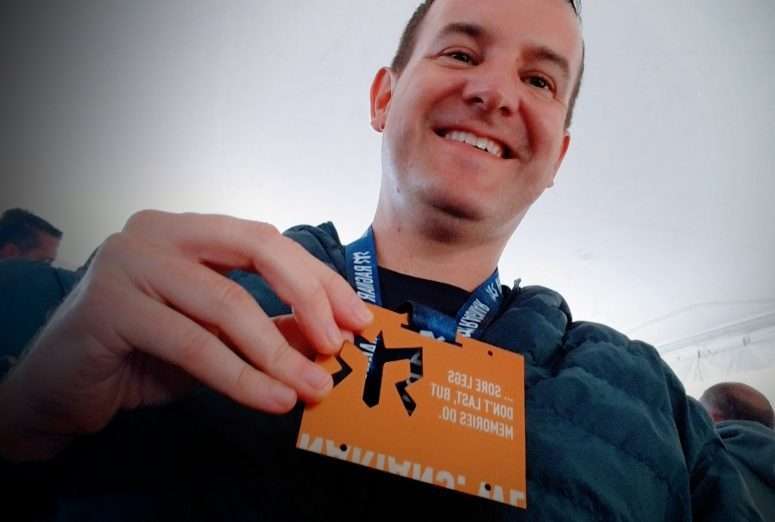 It still might sound a little crazy but if you enjoy running you should really put a RAGNAR event on your bucket list. It’s a fun, exhausting but exhilarating way to spend a few days with friends.

And maybe make some new friends all while you run 200ish miles and spend many hours in a van.