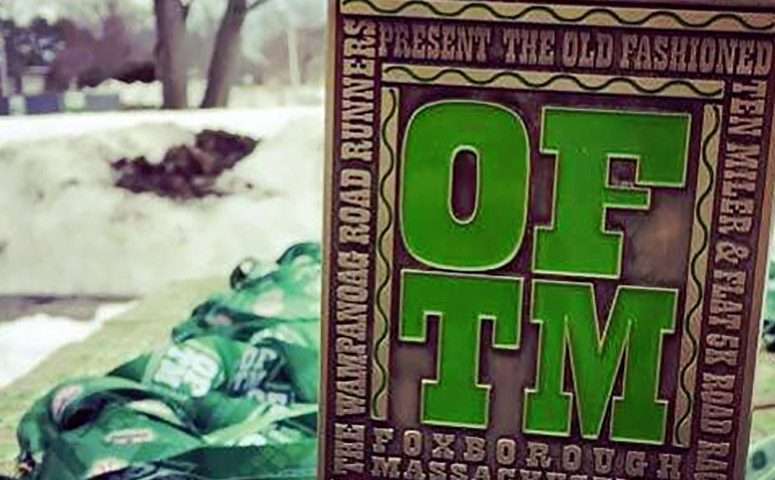 Here’s a free tip. The night before a half marathon don’t stick your face in a bucket of tabbouleh salad and eat till you’re stomach swells with bulgur and parsley. It won’t end well. There were some nervous moments in the hours leading up to the race and a few frantic twinges in the middle miles, but (spoiler) everything ended up ok and I actually had a pretty solid race in a unique twist to the annual Old Fashioned Ten Miler in Foxborough.

In the past, the OFTM 5k and the 10 miler went off at the same time, but this year they shifted it so the 5k  went off at 10 and the 10 miler followed at 10:45 allowing a runner to do both and complete a unique and ‘Badass’ half marathon. Sounded like a great idea to me. And I wasn’t the only one. Lots of pre-race chatter of what a good idea the combo race was. 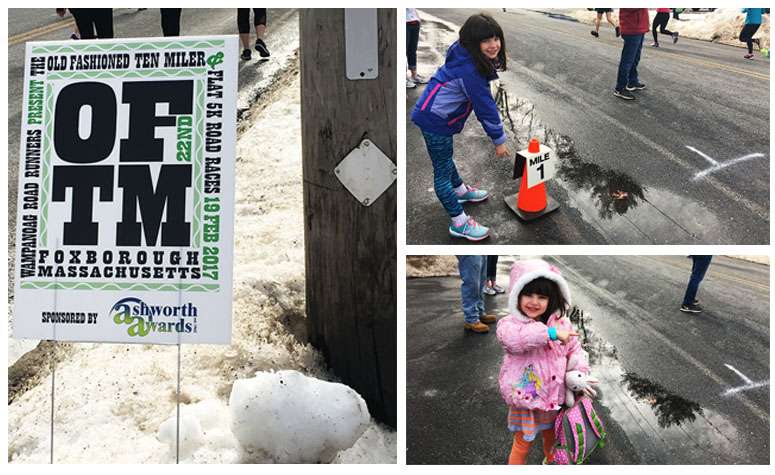 Pre-race
I won’t go into any more detail on the tabbouleh salad incident, but I was very glad this race was starting at a relatively late 10 a.m. Any earlier and I might have heard the starting gun from the porta-pot. Needless to say early in the day, fueling up was less a concern than just walking without my cheeks clenched. Never mind running.

Other than my rumbling tummy, the day was near ideal for racing, highs in the fifties, no wind, a little overcast. After a string of bad weather luck (not sure you can call it bad luck when you hold a race in New England in February) where the race was canceled or shortened for three years, this marked the second year of mild weather.

While pounding ginger tea and Pepcid in an effort to get my stomach settled, I parked and made the trek up to the building to pick up my bib and swag. New parking lot this year, bit of a hike to the bib pick-up. Sure, I could have looked at it as an opportunity to warm up, but I was grumpy (see: tummy above).

Check-in for bib pick-up was divided up by last name and went very quickly with plenty of volunteers on hand. After grabbing my bib, I headed over to the swag table, picked up a nice clear bag (printed with the race logo, handles and a zipper, not just a glorified trash bag) which I could see using at races in the future for security checks. I then walked the sample line and stuffed my bag with a few goodies. Best: That’s It fruit bars and Goodness Knows snack squares. Worst: salami cups. Nothing against cured, fermented meat, but right before or after exercising? No thanks.

I grabbed some water and ambled back to the car to drop off the swag and spend 10 minutes crookedly pinning my number on my shirt. There must be a better way, right? By the time I walked back to the car and did all that, it was time to turn around and walk back up for the 5k start. At this point, I was cautiously optimistic that I was empty of tabbouleh.

The 5K
One little old school oddity at the start was that while the race was chip-timed, it was not triggered by a mat at the start. It was an old school gun start for everyone. This screwed me up a bit as I thought I’d start farther back to help institute some crowd pacing on myself, i.e., force myself to start slower by dodging around slower folks. Which did work, in the end, but probably cost me 20 seconds or so.

Pacing was the big question. How exactly do you pace a half marathon that is broken into two drastically different distance pieces?

Overall, I settled mostly on going by feel and really trying to finish strong in the last three miles, but that still left the first three, the 5k, to figure out. I settled on comfortably hard. I wanted to push, but not feel that searing, lung sucking pain of a typical solo 5k. My usual pace for a 5k is in the 6:15-6:25 range. I didn’t want to be anywhere near that pace. I knew that pace would burn too many matches to finish the 10 miler strong. It helped that this 5k was dead flat and after dodging those people at the start, I found a similar knot of people and settled in around 6:45, which felt like a good clip, but wasn’t making me huff and puff too much. I think I annoyed a guy by tucking in behind him for those first couple miles, but I picked it up a bit in the last mile dropping him and my pace to 6:35.

Got some water, checked in with my cheer squad and just tried to stay loose and warm in the 30 minutes between the finish and the 10 miler start.

Soon enough it was time to question my sanity and head for the 10 miler start, which was about a half mile walk up the road. This time I was savvy enough to tuck in closer to the start and not waste any time just getting to the start (laugh if you want, every second counts!).

Again, not knowing what to expect, I started pretty conservative. I’m thinking of a 7:40ish pace for the fall marathon, so I thought I run around there and see how that felt for the first five miles and then re-assess.

The first mile goes over part of the 5k course and is very flat, a nice way to get the blood flowing and the legs woken up again. Miles 2-4 wind through a state forest, on paved roads, and are distinctly more rolling. Mile 2 is a net downhill of 65 feet before miles 3 and 4 climb back up. I was feeling pretty, but kept the pace in check as I let a bunch of people pass me in the first three miles. Not easy for me, but something I need to practice, especially for the marathon. If you get caught up in the flow early, you could pay dearly in the end.

Coming out of the forest and off the rollers, I’m not sure if my legs woke up to the challenge or if I just started to get bored and wanted to be done, but I kicked things up a notch and found another gear.

It occurs to me now, that after settling down, my stomach did pipe up with a few twinges around mile 4. And let me tell you Foxborough in February is pretty barren of shrubbery, so if things took a dark (brown) turn, there weren’t a lot of places to duck and cover. So maybe I started running on fear? Or running to nearest bathroom?

Whatever the answer, it worked.

Starting with mile 5, I dipped under 7:10 per mile and never went above that for the rest of the race.

I had extra pills and nutrition (margarita shot blocks!) in my race belt and had planned on taking them around mile seven or eight, but I was feeling good (tired, ready to be done, but strong) and thought fumbling my the race belt might throw off my pace and I decided to just push on.

Very happy with miles 7 and 8, a nebulous time where you are past halfway but not quite close enough to smell the finish. Both miles were net uphills where the GAP pace was actually in the 6:50s.

At this point, I was passing quite a few people and picking up the pace, eager to pass more. I could get used to this feeling. I kept it up right to the end, too. Passing two people in the last quarter mile and just missing a third. Very proud that my last mile was done in 6:37 and was my second fastest mile of the day, only 3 seconds slower than mile 3 of the 5k.

In retrospect, I might have been a tad conservative on the pacing, especially early in the 10 miler, but I’d always rather finish strong and under pace slightly than go out too fast and fade to the finish.

Two notes on the 10 mile stats. First, my 10 miler time was over seven minutes faster than last year and that’s without running the 5k last year. Fitness and Addison’s maintenance has definitely improved.

Second, this was my first race in my new 40+ age group and I thought I’d get a bump moving into a new, older age group. Yikes, guess not. There were some speedy forty year olds running.

There were masseuses, which I took advantage of, as my hips definitely tightened up in the last couple miles. A good reminder that I can’t neglect the IT bands and core even if I’m currently in a shorter triathlon training block.

There were also a lot (more than 25) of raffle items based on your bib number, but yet again, I didn’t win anything. So after getting food and stretched out, I called it a day and headed home.

The combo half marathon was unique and fun and I’m interested to try it again if they offer it next year. The results were all posted quickly and they even had free race photos you could download.