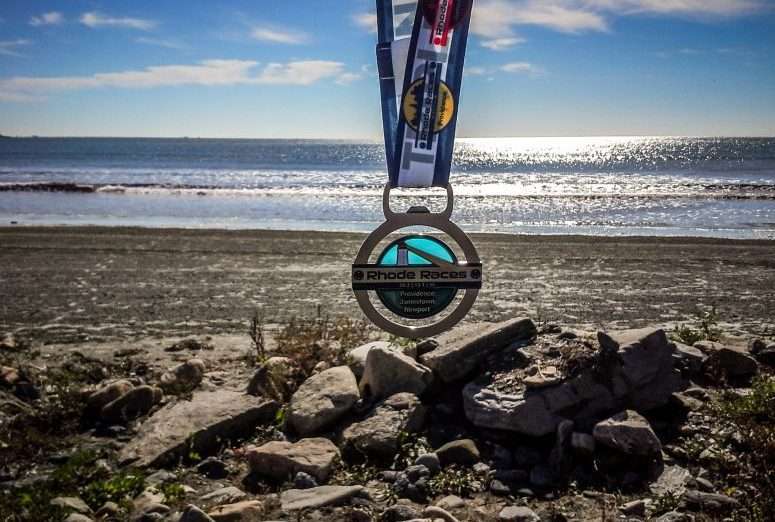 It was the hubris the brought me down. Fresh off winning my age group at the Rev3 Poconos Olympic event, I thought I’d wrap my season by putting that AG winning fitness to good use and lower my half marathon PR, or even get under that 90 minute mark, at the Newport Half Marathon. Knock off a a dozen or so miles at 6:50 pace and duck in under the wire. That was the plan. The race did not going according to plan.

Pre-race
One advantage of racing in Rhode Island is the nearby baby-sitters and lodging. Hotels in Newport are not cheap. We actually splurged and used some leftover Marriott points for a night out after the race, but two nights was not in the budget, so the afternoon before the race we drove down to my parents with the kids.

We left them in the land of cookies, candy and unlimited attention and drove over to Newport to pick up our race packets and then meet up with some friends, that were also running, for dinner.

The packet pick-up did not go well and other than my own performance, which we will get to, was the worst part of the race. This race included a marathon and a half marathon with separate tables. One line was very long, the other very short. No one adjusted the number of volunteers or did anything to help the situation. We stood in the cold for almost two hours waiting to get our numbers. Not the first impression you want to make on participants. [Edit 4.22.15 – it appears the race organizer has changed hands]

On the plus side when we finally were able to escape, the small Italian place we went to for dinner, Sardella’s, was quite good. Or maybe I was just relieved to be inside with warm food, but I’ll give them the benefit of the doubt.

Race Day
Race day dawned cool and sunny, a perfect day for running. We drove over the bridges and parked in the hotel lot. Parking in Newport is limited and expensive, especially near the downtown area. So besides a night out after the race and a guaranteed, uninterrupted nap in the afternoon, the hotel’s parking was a key feature for the race. We’d have to walk a mile or so to the venue, but we wouldn’t have to deal with the remote parking and shuttle buses.

We used the mile or so walk to warm up a bit and after climbing the Memorial Blvd hill, we arrived at Easton Beach, the start and finish of the race. We met up with our friends and while they went off to the bathroom, I got in the line for the lockers.

I really like the Blue Trailer remote lockers that have popped up at area races this year. I had reserved a small locker to securely store my ID, keys and as much clothes as I could stuff inside. I’ve used them twice in the past and the process has been quick and easy. Today, just like packet pickup yesterday, the line was longer. Not sure if they did some extra advertising or word is getting out, but I burned most of my warm-up time waiting to get my locker key. I’ll chalk it up to growing pains of a new business and a trade-off for the peace of mind of not stuffing my bag in some bushes.

With valuables stashed, I headed the short distance over to the starting line and tried to get a quick stretch warm-up in while they were doing the pre-race announcements. I wasn’t overly successful and pretty soon we were on our way.

The Race
I really wished I’d had more time to get the legs warm as this race doesn’t mess around at the start. After a half mile along the beach road, it immediately has a short, steep climb that broke up the mass start. After the first mile, you get off the main roads and head into some smaller streets and neighborhoods as you work your way around the southern end of the island. For all my complaining so far, the course is very scenic. You are rarely out of sight of the coastline for long and often running right along the water’s edge.

You are also rarely running on flat ground. It is a rolling course, with many of the hills coming in the back half of the race and feeling steeper on tired legs than they probably really were in reality. After getting up and back down the hills near the start, I was a little off the 6:50 pace, but not much.

The next five miles were flat or slightly downhill and as we circled the Newport Country Club, I held the pace fairly steady, but still slightly above where I needed to be to hit the 1:30 goal. I was jogging along with another couple for the first six miles who were also going for a sub-90, but had fallen behind them at mile 6 in this odd little button hook section of the course. Not a good sign.

In retrospect, with the easy grade here, I should have been under the pace and banking some time. Instead, I was clawing to hold on to a sub-7 pace and by mile 8 had started to fade.

Coming up Ocean Avenue and starting to turn back toward the beach and the finish line is where I hit the wall and the wheels came careening off. Before hitting the finish and coming back down that steep hill that we climbed at the start, miles 10, 11 and 12 were all net uphills. Not a ton, but after 10 miles even a 30 foot net gain takes its toll. It really took its toll on me.

Overall, I think I just tried to squeeze in one race too many after a busy season. My legs didn’t have it and mentally, I caved when I hit those “hills” in the last few miles. I just wanted it to be over. 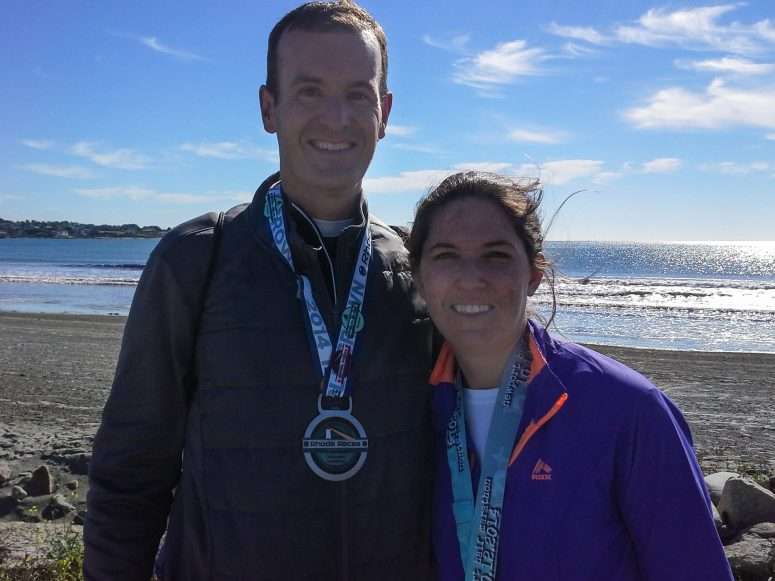 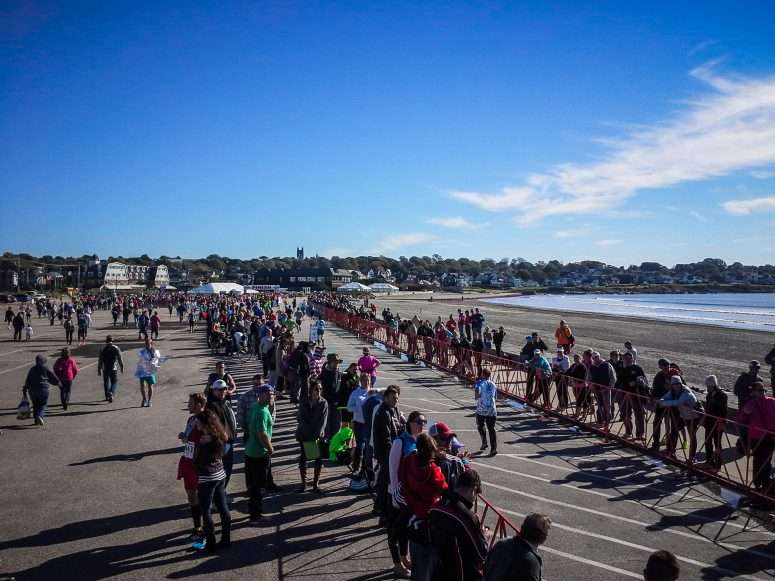 Post-race
Continuing the theme, the post-race refreshments were limited, crowded and cramped. It wasn’t that much of a problem for me when I finished, but by the time Michelle came in, the area was overrun. Despite the scenic and challenging course, due to the other logistics, I’m not sure I’d run this race again unless it was re-worked or a new race director/organization took it over [edit: as noted above, it appears the race has indeed changed hands since this post].