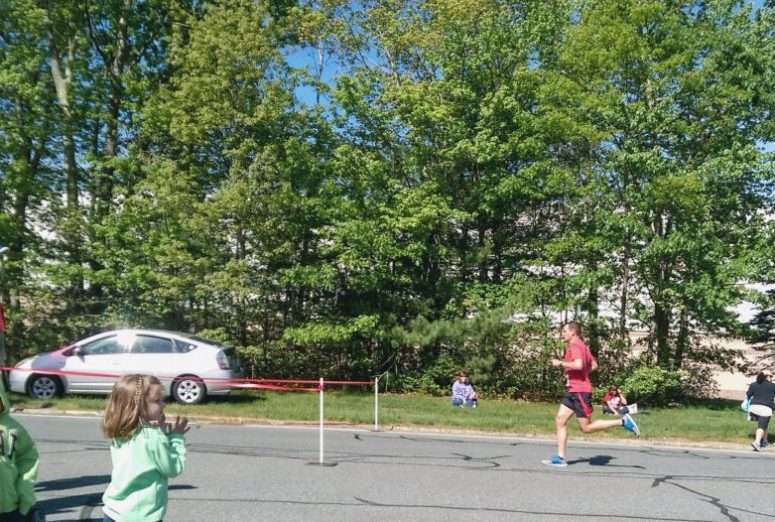 I now have a sworn enemy for this race. His name is Sam Burgess and he’s 12 years old and for the last two years he has humbled me and taken me down at this race. I can’t out run Sam. I can’t out run youth. But I can hate them both a little bit. Even though Sam beat everyone else at the race, too, and running a sub-19 minute 5k as a 12 year old is sort of impressive. It definitely is to my 12 year old self.

April and May in New England, before the heat and humidity set in, is prime charity 5k season. A quick glance at any race calendar will easily give you double digit options to choose from each weekend. Most are smaller race, each for a worthy and good cause. HMEA’s run and family day afterward is one of those races (note: the wife works for HMEA), but I doubt you will find a similar race of this size (about 200 runners) that is as well supported.

For your race entry, you get the typical swag (tech shirt, coupons, a few samples), but you also get post-race snacks (fruit/bagels/Clif Bars), a BBQ lunch if you stick around, plenty kids activities, massages, music and a performers. It’s a great day of racing, family activities, food and supporting a good cause. All for the price of a 5k. Hard to beat that.

We had pre-registered ($25 – on the cheaper end these days for a 5k) and picking up the race numbers a half hour before the start was painless. Plenty of volunteers around to handle pre and day-of registration.

Port-a-Potty ratio to participants was good. Line never got too long.

I did my own warm-up, but they had a someone warming up the masses with some dynamic stretching.

This was a deceptively challenging course. After a quarter mile flat start, it climbs for the next mile before flattening out in the second mile then finishing mostly downhill. I’ve ran this four times and never gotten close to a sub-20. Last year I struggled to a 20:57.

This year, though I hadn’t raced a 5k since December, and was not really doing anything to prepare for this race specifically, I felt fast and confident in a good time. I’d been doing a lot of interval and hill training for the triathlon next month and was determined to go hard the whole way or blow up trying.

I took a spot in the second row with some similar distinguished but fast looking guys. We chatted about Garmins and expected times. The usual. They claimed (always hard to tell who’s telling the truth) to be going for 21-22 minutes. I found out later they were mostly telling the truth. Figured I’d stick near them for at least the first mile.

I went out moderately hard. A few kids jumped out fast, but most fell back by the hill, save a handful. One guy about my age was just in front of me. I hit the hill in seventh place, but passed two guys on the hill for fifth by the time we climbed most of it and made the turn onto Union St.

The first mile was 6:27, slow for a flat first 5k mile, but I’d take it with that hill. I knew the next two would be faster as the same effort. I was feeling pretty good. I took the next half mile to recover a bit. I knew after we made the turnaround it was going to be mostly flat then downhill.

The legs were feeling good. Lungs were also feeling good. As we passed the 1.5 split, I started to pick it up. I passed the guy about my age as we approached the turnaround and then picked off the teenager in third place about a quarter mile later. Sitting in third, I could see the two kids (they were definitely kids – I wouldn’t learn one of them was my new nemesis Sam until later) about 5o yards ahead. As we hit the two mile mark, I picked up the pace again. Mile 2 was flat and 6:19. That was a bit slow in retrospect.

Even though I felt like I was going at a good clip (half mile splits were under 6 minute pace), I wasn’t making much headway in catching the kids in front. I’d closed the gap a bit, but mostly because the kids weren’t running the tangents very well. I didn’t think I’d catch them. The good news/bad new was nobody was going to catch me either. I ended up in no-man’s land. Too far away to push myself to try to catch the kids, but no one behind me to push me either.

The third mile was the downhill reward for that first uphill mile. I did it in 5:45 and had enough to finish the last tenth strong for a final time of 19:12. Way under 20 minutes and a new PR by almost 30 seconds. Of course, I could only think about those 12 seconds I left out there that would have gotten me under 19 minutes. Such is the mindset of a runner!

Here is where things got wonky. After a lot of confusion and delay, it was revealed that a truck had run over the timing mat during the race and effectively broke it. Weird, fluky mistake, but it made the results and the posted times mostly suspect.

In the end, my time and place remain incorrect out on the interwebs, but I did get my official race day recognition as the third place finisher and first in my age group. Last year, the age group prizes were painting done by some of the program’s participants. This year was a branded mug with my age group place on it.

Even better, my Dad, a recent runner, grabbed his first age group podium. Very cool. I’m very proud and inspired to keep running until I match his podiums at his age.

After the award ceremonies, we took advantage of the nice day, hung out, had some food and let the kids wear themselves out on the activities (we did limit them to one cotton candy apiece).

All in all, this remain a fun, local race and you get more than your typical bang-for-your-buck for a 5k entry fee. If you live in the area, it’s well worth seeking out for a spring 5k race and to support a very good cause. I’ll see you next year, Sam Burgess.