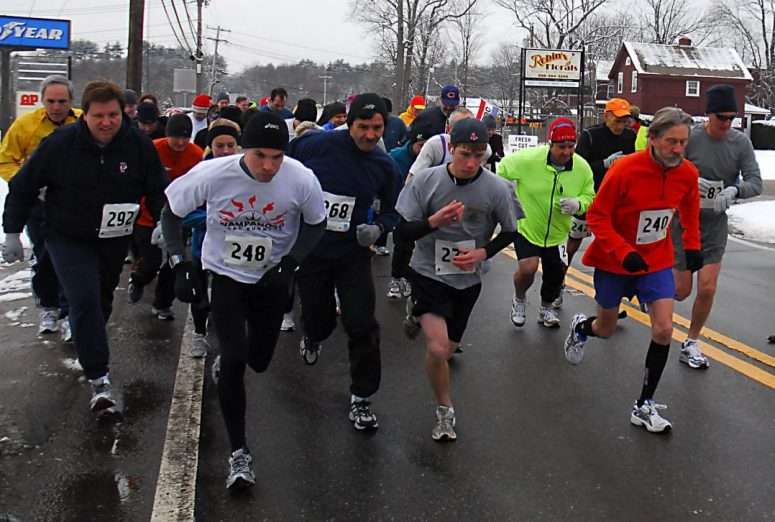 When you sign up for a race in New England, you really never know what you are going to get. It could be mid-40’s in June or mid-60’s in January. It keeps you on your toes. It wasn’t quite 60 degrees, but it was way, way warmer for this New Year’s Day 5k versus last year’s version.

Last year, I struggled to pin my bib through six layers of clothes and had icicles hanging from my ears by the end. This year, I was quite comfortable in shorts and a t-shirt. The hill in the first mile? Yeah, that didn’t change.

This is the second year in a row I’ve started the year off with this 5k and I can see it becoming an annual habit. Not only is it great to start the year off with a run and flush out any of the New Year’s Eve toxins, the race is run by the local Lion’s Club and they support a number of great local charities.

Plus, there’s a great breakfast buffet and the bar is open (so much for flushing all the toxins) after the race inside the Eagle Brook Saloon. 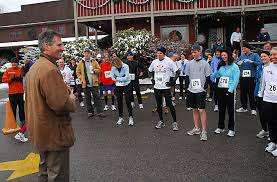 It’s a 10 o’clock start, so not insanely early and it’s a small race with a very homegrown and relaxed vibe. Our local running club has basically adopted it and it often feels more like a slightly competitive training run than an actual race.

It takes place just one town away, so you can squeeze in that extra cup of coffee or 20 minutes of sleep if you live nearby. Parking at the Eagle Brook is ample enough to support the race (usually around 100 or so entrants).

You pick up your bib and swag (the always popular gloves) inside the restaurant and are welcome to hang out inside until the race start in years where it is very cold. They don’t have a problem with bags so you can scope out a post-race table and leave your stuff while you run. Also, indoor plumbing. No porta-potties. Not a bad way to start the year.

With a small race field and ample volunteers, it wasn’t a long wait for your bib or to sign up day-of. Worst case, they would happily create a bib with a sharpie for you. It was that kind of race.

Keeping with the chill vibe, after some brief introductory remarks (which included an amusing disclaimer about their lack of professional timing) we all trooped out onto the road and congregated in an approximate start point. There was no line, but no one seemed to concerned. The race director asked if we were ready and then waved his hand forward. It was as good a start as any.

After a brief bit of downhill to get the legs moving, we made a right and started the mostly mile-long climb uphill. After the debacle of trying to run with (a much faster) running club friend at the Angel Run and blowing up, I was determined not to repeat my mistake. I let him go and tried to maintain a steady but reasonable climbing pace. I settled in with a small group of four other runners.

Halfway up the hill, my friend was receding into the distance over the top of the hill and reinforcing my choice of a conservative start. I had already pulled away from two of the other runners I started the climb with. One guy was amusingly swearing and berating himself mercilessly under his breath. I stuck with another running club buddy (also faster than me) but coming off an injury.

Mile 1: 6:55 (6:27 GAP) That’s a few ticks faster than the previous year and the GAP pace tells me it was conservative for a 5k for me, so right on target. Way better than my 6:07 first mile in my previous 5k where I completely blew up in mile 3. 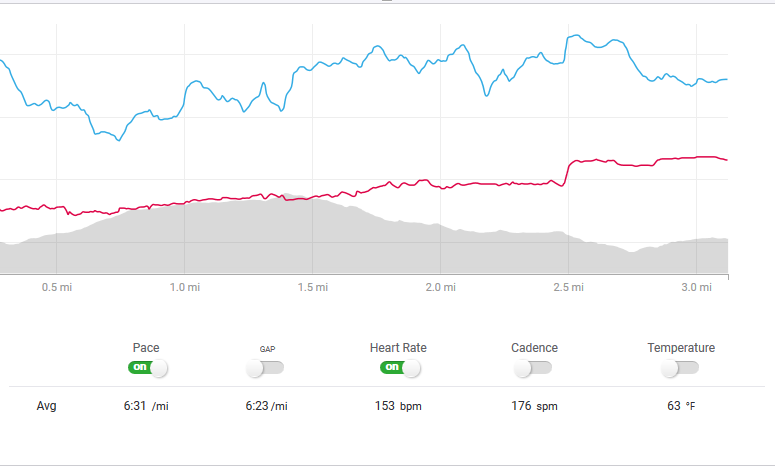 We crested the hill and made a right and cursed ourselves when we still found ourselves going uphill. I had told him once we made the turn that it was a sharp downhill until we turned back toward the restaurant. Whoops!

After another quarter mile climb, we did eventually hit the downhill around the halfway point of the race. Still running with my friend, we dropped the pace pretty good going down the hill. At least until the suddenly stiff wind blew his hat off. I waited. It wouldn’t be good karma to leave him in the first race of the year because of a hat malfunction. We also had a pretty good gap back to the next runners at this point.

Mile 2: 6:28 (6:32 GAP) The danger of starting out conservatively is your body basically adjusts and shifting it out of that gear is more difficult. Yes, we had to  get the hat and there was that surprise climb in the first half, but was hoping this would be closer to 6:15-6:20.

The last full mile is a gentle net downhill on a quieter tree-lined road that provides a nice contrast to the first two miles that run alongside businesses and a minor highway. Or maybe people would like the distraction. Mile 3 of a 5k is where it gets real and the legs and lungs start aching.

As we came off the side street and entered the last half mile I pulled ahead just slightly and used the last bit of downhill to create a little gap. I knew there was that slight climb (which wouldn’t feel so slight at that point in the race) at the finish.

Sure enough, I almost misjudged it. That last quarter to a half a mile into a good wood really sapped my legs, but I held on for my second straight second place overall finish. 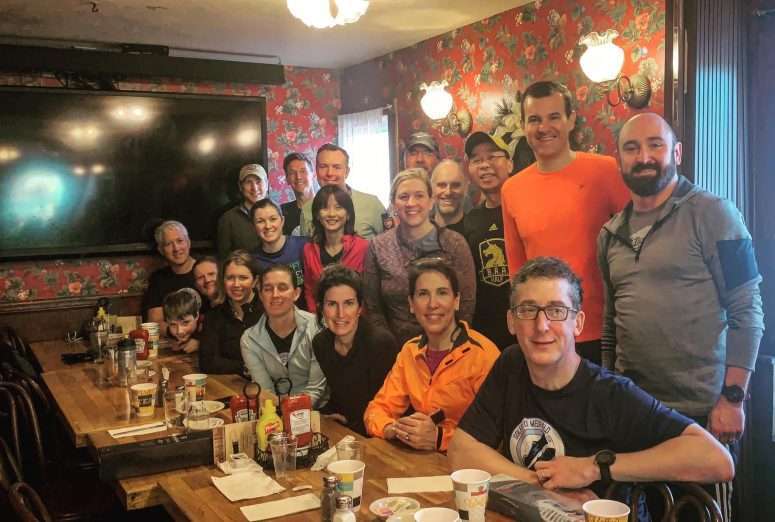 After quick mile cool down job, the breakfast buffet lived up to expectations. New this year, veggie or bacon quiche to go along with the eggs, bacon, french toast, potatoes and fruit. Plus a beer, of course.

In addition to the buffet and the $25 dollar gift certificate to the local running store for finishing second, I also won a raffle prize (they raffle off a lot of items) and snagged a bottle of whiskey.

Not a bad way to kick off the year. This is a fun, relaxed race that offers an easy way to kickstart a new running habit or just get in a little exercise after the holiday indulgences. Yes, there is that pesky hill, but there’s also a breakfast buffet at the end.

I’ll be back next year.