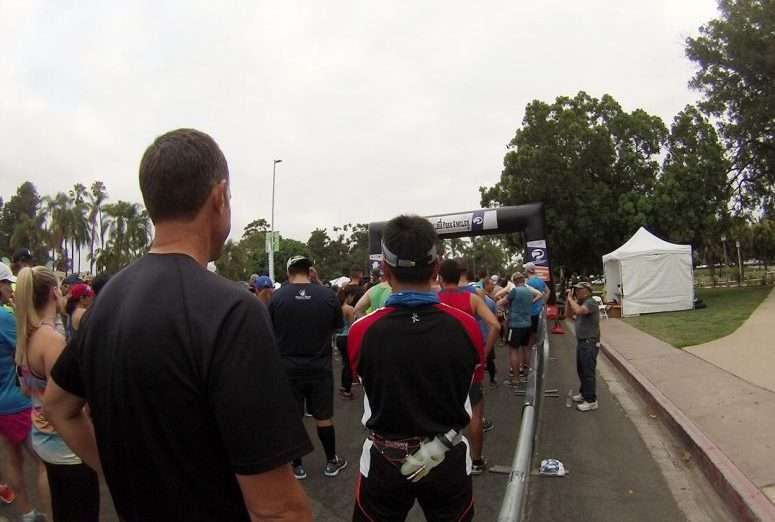 Is there anything better than an unexpected vacation race. My ideal vacation? Family, friends, warm temperatures, good food and a race. Seriously. I love running to explore new places. Getting a little lost, seeing the sites, finding your way back out again. Much better than relying on the rental car’s nav system or only sticking to the tourist trails. This year’s big trip was out to California with the girls. Half the time up in San Francisco and half the time down in San Diego (with a quick day and half stop in Anaheim – what could the kids possibly like to do in Anaheim!).

My sister’s place east of San Francisco is a man-made place on the delta and I’ve run around it on past visits so my morning runs didn’t offer many surprises besides a reminder that the heat and humidity just feels so different on the other side of the country.

The second part of the trip was visiting my brother-in-law in San Diego. I’d never visited the city before and with the girls staying with the Aunt and Uncle, I suddenly had the early mornings free to get a run in before the daily activities started.

The size and some of the layout of San Diego, at least the city proper, reminded me of Providence. It’s a small city, or feels like it, centered around the water. The one big thing San Diego has over Providence, at least for runners? Balboa Park.

The morning after we arrived, I wound my way through some of the city streets before crossing over the 5 and heading into the park. I had no plan and just took whatever path or trail struck my fancy. And there were plenty to choose from, paved, rough, dirt. I enjoyed the variety and changing surfaces. I worked my way north across the big bridge, past the Museum of Man and the history museum before turning back around near the entrance to the Zoo.

It was on the way back that I noticed the sign for the Balboa Park 8 Miler. Organized by the San Diego Track Club (I love just about any race run by a running club), it was the longest consecutive road race in San Diego. And I would be in town on Saturday for it’s 62nd running. How could I pass that up? I couldn’t. I finished up my 7 miles and registered before I’d even showered. I was in.

Running a race at seven a.m., early even by American road race standards, after spending two days at Disney and driving back late the previous night, was probably not the best prep I could do, but I was determined to have fun and enjoy this unexpected race. The girls might get character dinners and Splash Mountain, but I was just as happy pinning my race bib on mingling with my tribe near the start area.

It was overcast and cool (by San Diego standards – about 70) with little humidity. If you had to be out at 7 a.m. for a road race, it couldn’t get much better. I grabbed a light breakfast (banana, instant oatmeal, juice) at the hotel and made my way over to the Pan American Plaza, where the race would start and finish. Pre-registered bib and shirt pickup was a breeze with plenty of volunteers eager to help. The only downside? No gear check, so I wasn’t sure what to do with my new t-shirt (I ended up sticking it in some bushes and picking it up after the race). There was pre-race water available and some of the sponsors were up early and set-up too with some samples.

After the usual pre-race announcements and anthem we were off promptly (by my Garmin, exactly) at 7. I knew from my previous run that the terrain inside the park was varied and the race promised “unique and challenging route through Balboa Park’s scenic trails, bridges and windy roads” so I settled in at a comfortable pace and made sure to save something for those upcoming challenges. 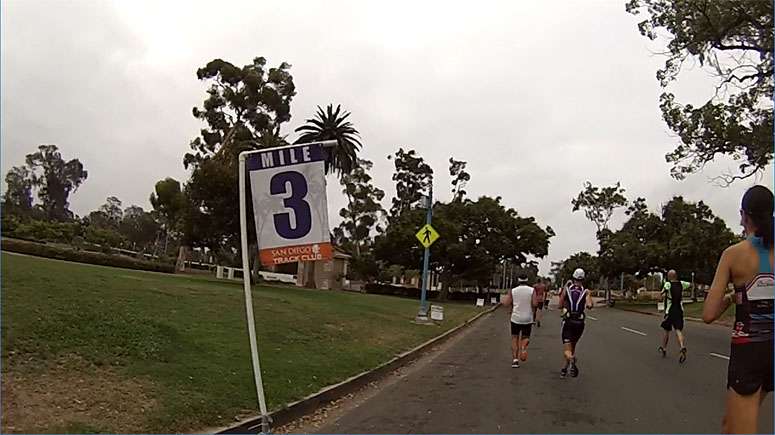 The race had a large field, which made finding a group running around my pace or someone running just a bit faster to spur me on, easier, but it also made the start a bit congested as we worked our way across the Cabrillo Bridge onto the winding paved paths on the west side of the park along Fifth Avenue.

While there were no big, quad killing hills (with one exception that we’ll get to in a minute!), there were also no flat sections, you were constantly moving either up or down. The first half of the race had two net downhills (mile 1, 7:30 and mile 3, 7:33) and two net uphills (mile 2, 7:28 and mile 4, 7:31). So my first half splits were daily even, though the grade adjusted paces show I worked pretty hard to keep them that way on the uphill miles.

The halfway point of the race took us back across the Cabrillo Bridge, around the Zoo and onto some dirt trails. Mile six was a big downhill and you know what that inevitably means. As we left the Zoo behind, I tried to get some free speed going down and not break an ankle on the horse trails. 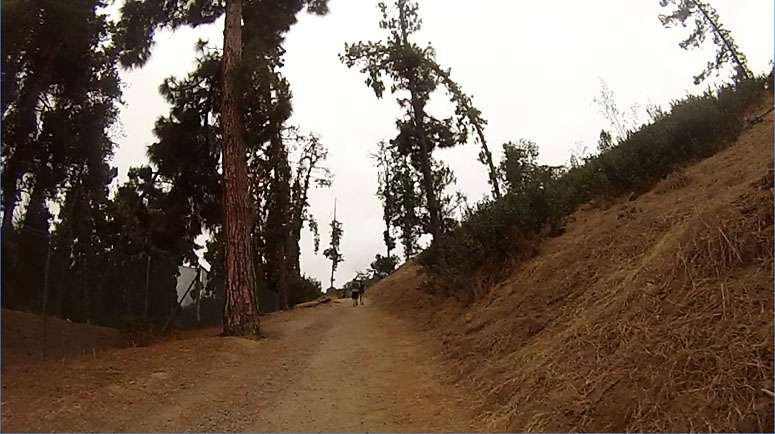 Sure enough, a half mile later the hill bottomed out and then started climbing (what I’d later learn was called Zig Zag Hill) back up. It was appropriately named. It was a seriously steep, dirt, switchbacking trail that slammed my pace to a crawl. On paper it doesn’t look terrible. About 100 feet of elevation. It only took about 2 minutes. But it crams that elevation into less than a quarter mile over tricky terrain. Mile 6 with this beat of a hill was my only mile in the race that peeked over the 8 minute mark. Mile 5 split was 7:37 and mile 6 was 8:18. 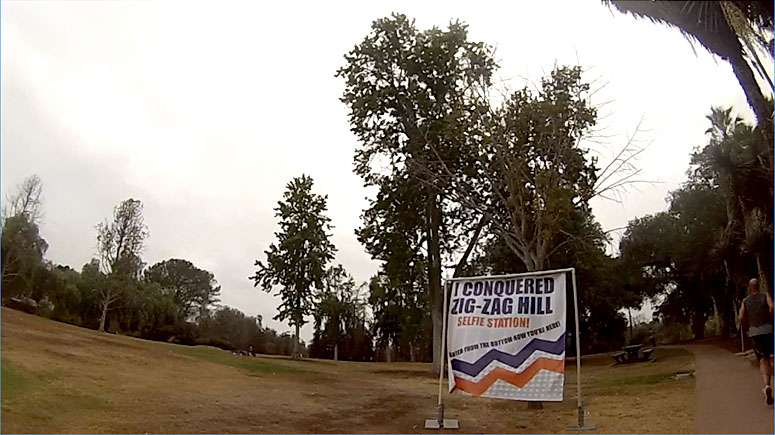 Thankfully, the race directors had some mercy, as after surviving that climb and letting the lactic acid slowly leak out of my quads and calves, the final two miles back on the west side of the park, are slightly downhill.

The pack I had been running with was much smaller at this point in the race. Just a handful of men and women, all breathing pretty hard. Zig Zag Hill took a lot out of my legs and I distinctly remember the suffering really amping up at this point and latching on to one woman specifically to try to drag me to the finish.

The final mile took us over the Cabrillo Bridge for the third time, I was beginning to really hate that bridge, into the Pan American Plaza and the finish. It took all I had to maintain my pace. I had nothing left for a kick and was just happy to get to the finish. Mile 7 split was 7:35, a decent recovery from the hill and mile 8 was 7:16, so not a big kick, but not a sloughing walk, either. 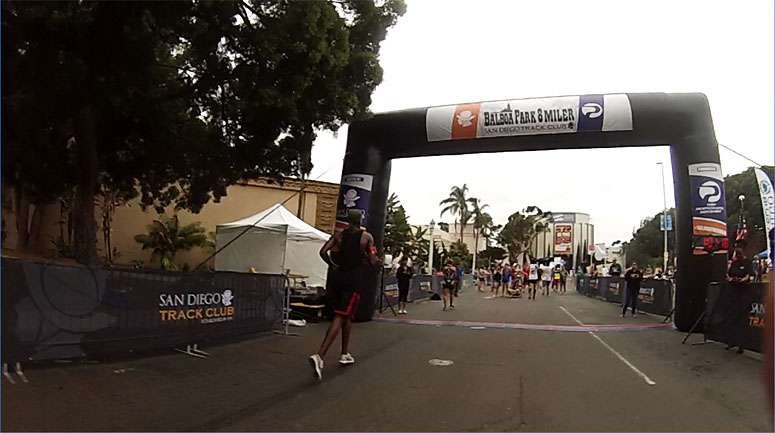 Pretty happy that while I didn’t run a negative split (thanks Zig Zag Hill!), I did improve my standing throughout the race. I was 144th at the 5k mark, 117 at 10k and 111 at the finish. That’s some solid pacing, I think. 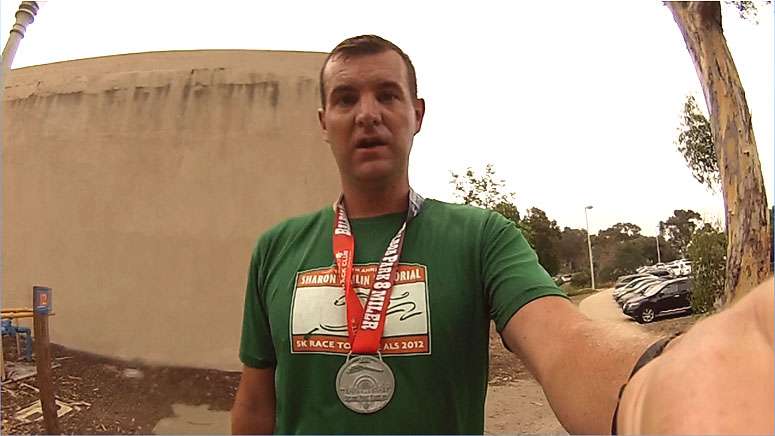 The sponsors were now out in full force and I hit up the mostly empty refreshment tables for bananas, coconut water, granola bars and chips. Finishing near the front of the pack brings some privileges, I suppose.

It was only 8 a.m., but the vacation agenda waits for no man. I retrieved my t-shirt from the bushes and walked back to the hotel to meet up with the family.