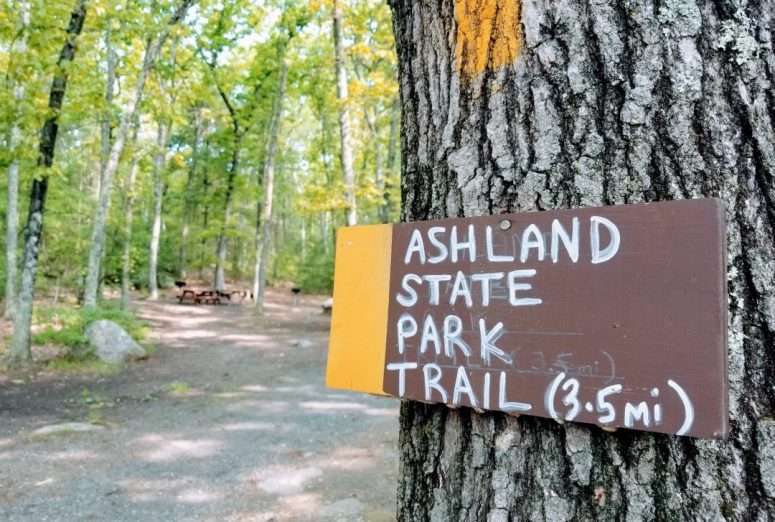 I realized I might have made a mistake just about a mile into the race when my foot slipped off a root and I felt a twinge run up my ankle. We have a big vacation coming up with a lot of walking and if I broke an ankle running a race, my wife might divorce me.

Spoiler: I didn’t break an ankle but it was a little dicier than I expected.

This year I do not have a race calendar or any concrete race goals. I’m just taking opportunities as they come and doing races that are new or look interesting. One of those opportunities popped up last week when a running group member posted on Facebook that they had a bib available (legally) for the local Ashland 10k trail race. Why not, I thought? 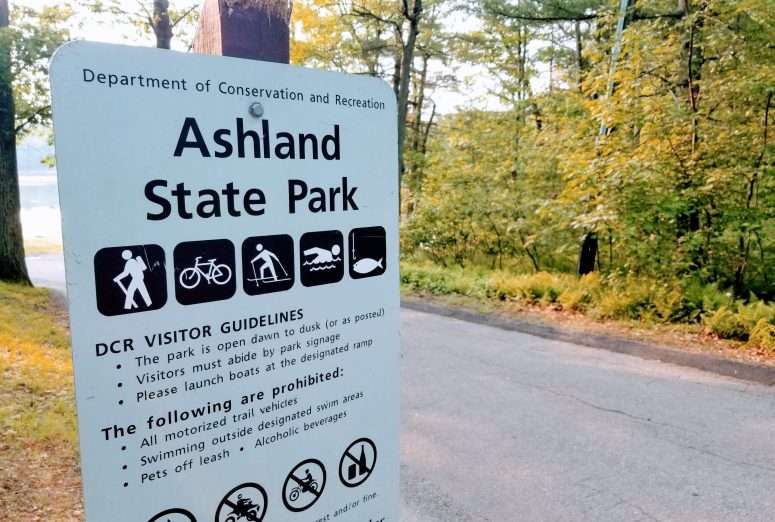 Everything leading up to the start line worked perfectly. The weather was sunny and warm for an 8 a.m. start. I like trail races because they are often smaller, less formal affairs that draw a very relaxed crowd and this one was no different.

The race was held in Ashland State Park about 30 minutes from my house. An easy drive on a Saturday morning. There was plenty of parking and the walk down the race prep area was just a couple hundred yards. 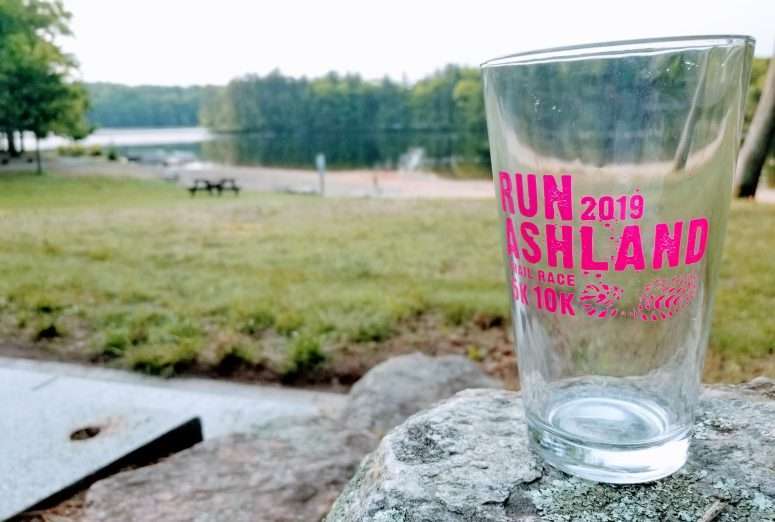 Registration was at two picnic tables near the lifeguard station of the reservoir that we’d be running around. After registering, you picked up your bib and pint glass.

One interesting thing included in the modest swag was a thing piece of sticky plastic called a veostrip that was meant to be worn (one-time use) on the forehead to divert sweat. As a copious sweater, I was intrigued. I could see using them for important or longer races. They cost about $1 a strip.

Porta-potty report: No potties at this race, actual bathrooms. Lines did get a bit long pre-race. 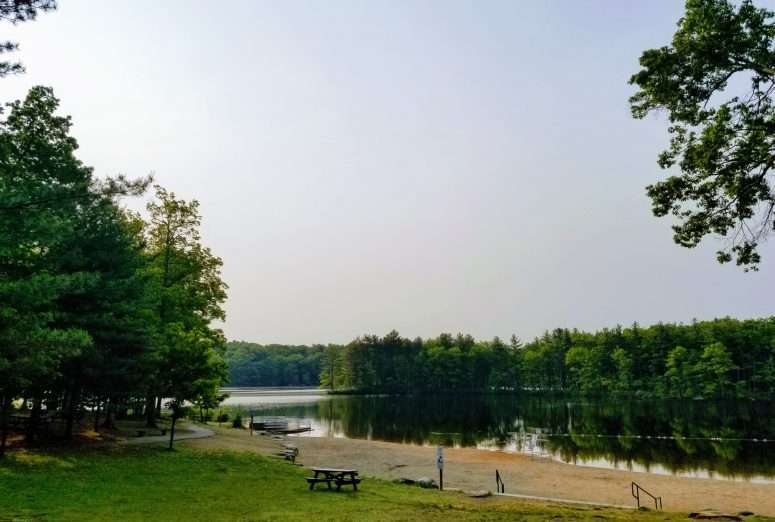 There was a short walk back through the parking lot to the start line. The national anthem was sung by two boys (maybe the race director’s kids) and it was cute and delightfully off-key in the best ways. Did I already mention I love homespun trail races.

While it was a trail race, we started on the park roads for about a quarter mile before heading into the woods. While I was doing the 10k, the race also included a 5k. Thankfully, not separate courses so no chance of getting lost. The 10k simply did two loops to the 5k’s one. It did make you wonder which race the people you were running with were doing.

After entering the trail, there was a short, twisting downhill before we emerged on to a flat crushed rock aqueduct section along the north side of the Ashland Reservoir. Little did I know this was the last fast section I’d see for a while.

After hopping up and over a short bridge, we entered the woods and I got a taste of what I was in for. The majority of this race was much more technical than I was expecting. The trails were wide and accommodating for racing but there were few clear sections. It was a lot of roots, rocks, and uneven terrain.

The next two miles were all woods and trails except for a brief (very brief) respite through a parking area and then it was back into the hooded gloom of the woods.

I turned my ankle twice and that was enough to put the fear of God into me. I don’t have the best ankles to start with so I back off slightly, still even going more slowly, it was a challenge to pick a clean path through the roots and rocks. I realized to really push the pace and compete at short trail races you gotta be slightly fearless and slightly nuts. Or just have no concern with snapping an ankle.

The first lap I was mostly running with a group of four others, one woman and three guys. One guy took off near the end of the first lap and I thought he might be a 5k guy but it turns out all of us made the turn for the second lap. I passed one of the guys. Another guy picked up the pace a bit. I settled in behind the lone woman.

We put some distance on the guy falling back in the aqueduct section. I was just happy to be back on a flat section. Sadly, it didn’t last long.

I should mention that there were at least a couple water stops along the way. I remember at least two. I mostly had my eyes down trying to avoid those roots. 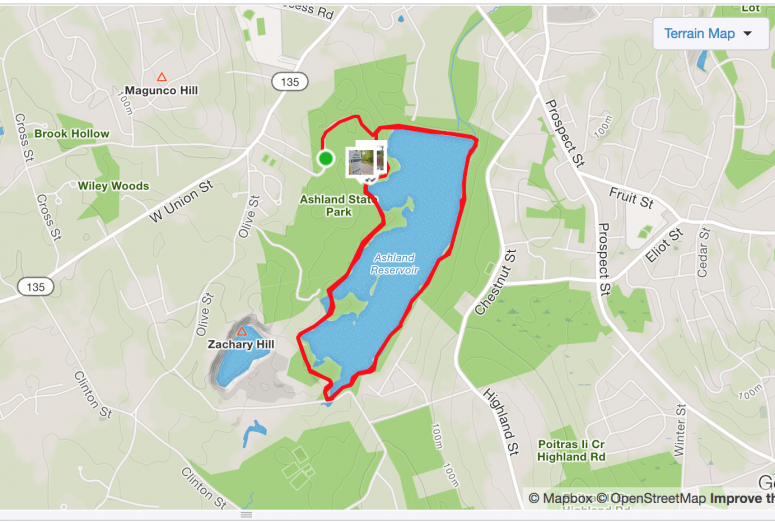 I knew I was getting tired and had to be more careful when I felt the tips of my shoes catching on some roots. Sure enough, right at mile 5, I went down. Hard. Thankfully, it wasn’t because of my ankle, more because I tripped but it wasn’t pleasant and it certainly didn’t help my ankle at all. Or my hand, which was no bleeding.

Kudos to the woman I was running with that she stopped and came back to check on me. I knew if I stopped for any length of time it would stiffen up, so I told her to keep going and I limped off behind her as fast as I could.

I think I did most of mile 5 on adrenaline. The last mile it all started to catch up to me and I was slowing down. I could hear people coming up behind me and the last quarter mile I was just determined to get out of the woods and finish without them passing me.

I made it by about 4 seconds. 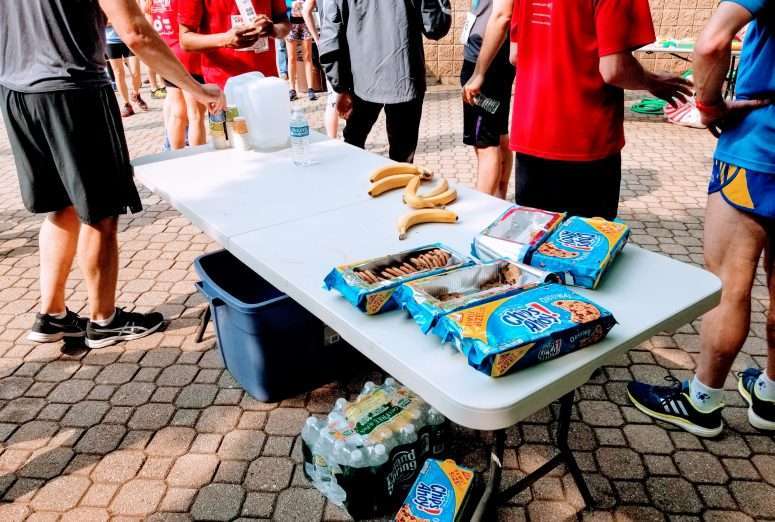 The post-race refreshments were inline with the rest of the race. Water, bananas, and Chips Ahoy cookies.

There were no age group awards but there were nice individual medals for the top 10 finishers (by gender) in each race. Plus, you got your pick of toy’s from the prize table. I think the kid’s toys tied into the race benefiting the Children’s Hospital League. 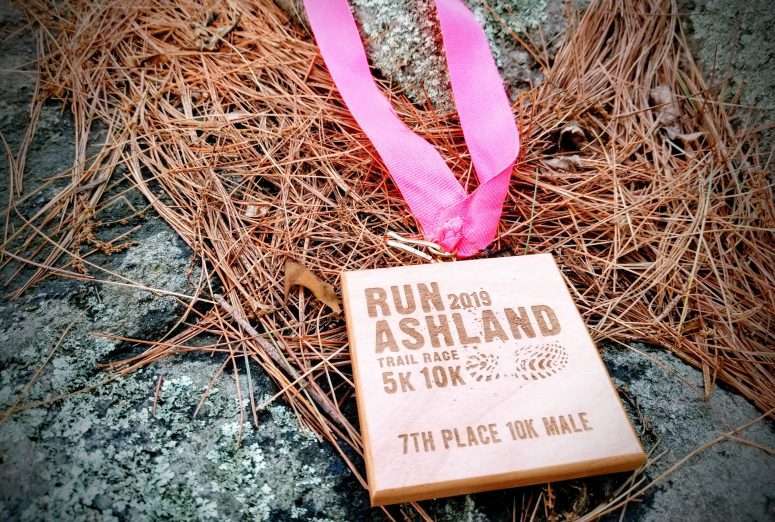 This is a scenic and challenging course. I hesitate to recommend it for beginners just because of the very difficult terrain for the majority of it. The trail is well marked and almost double track for the entire course but there is a good chance you might turn or twist an ankle even going slow. Run at your own risk. And not before a big vacation.