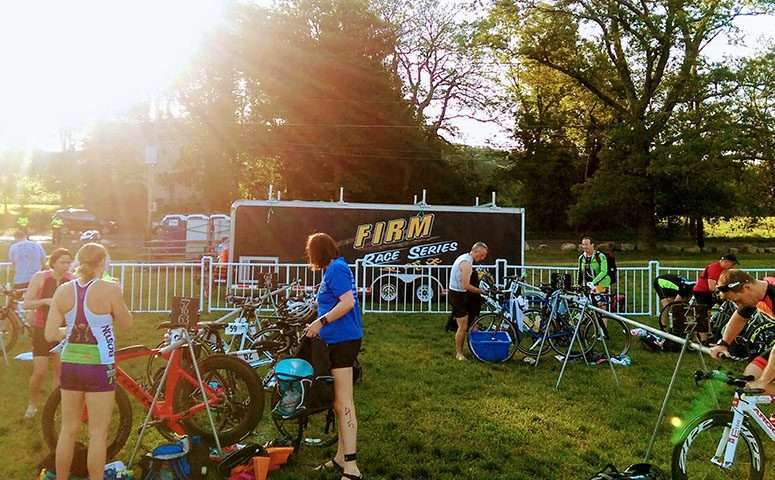 The Ashland Lions Olympic triathlon is a long-running (this was the 26th year), local race held in and around Ashland and Hopkinton, MA. Part of the bike covers the marathon start. It’s run by FIRM racing, a smaller outfit that does a variety of endurance events in Massachusetts and Rhode Island. They run the popular Appleman tri in July.

I hadn’t actually heard of this race until I literally ran into during a training ride in the area a few years ago. There aren’t many Olympic distance events in general (compared to sprints and 70.3s) and to find one almost literally in my back yard seemed like an invitation.

It took a few years longer than I thought, but I finally toed the starting line this past weekend.

I’ll admit, I was nervous for this one. For a variety of reasons.

First, it had been over two years since I raced an Olympic distance event.

Second, this would be the longest endurance event since my Addisons diagnosis.

Third, after a cool, wet spring, race day was forecast to be near 90 degrees. Given how Addisons messes with my electrolyte levels on a daily basis, add in some sun and heat and it can get really tricky.

One nice thing about smaller local races, even triathlons, are the logistics are easier. No hotels. No 4 a.m. wake ups to drive. No finding decent food for dinner or breakfast. No issues parking. That was true for this race, too.

Even with everything done on race morning with a 6:30 a.m. check in. I could still sleep till 5, have breakfast (pre-race usual – rice cereal, honey, banana, black coffee, water), use my own bathroom and not stress out because the course was only about 20 minutes away.

You know another way to tell it’s a small race? Porta-potty to line ratio. There were only 5 bathrooms, but the line never stretched more than 10 deep. That’s a pretty good perk.

There are, of course, some downsides to smaller, local events and we’ll get to those, but getting to the venue isn’t one of them.

Arriving just after 6:30, I was able to find my number, then get my chip, stickers and swag in about 5 minutes. I probably could have slept until 5:30.

I grabbed my bike and gear and picked a spot in transition to set up. The rows were identified by a range of race numbers, but you had your pick within the row, first come, first serve. As far as I could tell, this worked fine, again the smaller race gave everyone enough elbow room.

This was a freshwater swim in the Ashland Reservoir. I’ve done some local triathlons where the lake swim can be an issue. Either than muck and weeds never let up or the lake is just too small or too shallow. None of those problems for this swim. This is a great place to swim. A little rocky on the edge, but it quickly dissipates, as does any of the vegetation. The water wasn’t super clear, but to be honest, I don’t want to look around in the depths anyway.

As I’ve mentioned this was a smaller race and it was pretty no-frills in most respects. In a lot of areas this was a refreshing change to the branded larger events. At race time, they told each wave to get in the water and then a guy with a bullhorn said, “Ready, go!” It really was just about that quick. Some guys were still pulling on goggles.

This was an old-school mass start by gender. Most of my recent races have switched over to the time trial start. I wasn’t quite ready for the washing machine start. I somehow ended up off to the side but near the front. I should definitively not be near the front for the swim start. I am a mid-pack swimmer at best. It took about 400 yards and the first turn buoy for things to even out and for people to stop kicking and touching constantly.

I felt slow. Admittedly, I didn’t swim enough leading up to the race and had yet to swim in my wetsuit prior to the race, so I wasn’t expecting to be fast, but from what little I could tell during the swim, I was getting passed. A lot.

I think I finally mellowed out and just accepted a slow swim about halfway through. I found some open water and just tried to stay consistent and straight through the finish.

I mostly succeeded. My Garmin had me doing 1577, so less than a hundred extra yards. Not too bad given my notorious lack of good sighting technique.

Normally I wouldn’t give a transition it’s own section, but this one was, um, special.

So, the day before in the race communication there was this brief line “bring running shoes to the swim start/finish as it is a long run up on trails to transition.” Um, what? Chatting with some people setting up that also hadn’t done the race before, turned out I wasn’t the only one caught off guard.

After finishing transition set up, I still had some time to kill, so I jogged off toward where I assumed the water was to check out the situation.

Turned out that little note was a bit of an understatement. It was over a quarter a mile from the swim finish back to transition. The first half of that on an uphill trail with some gnarly roots. 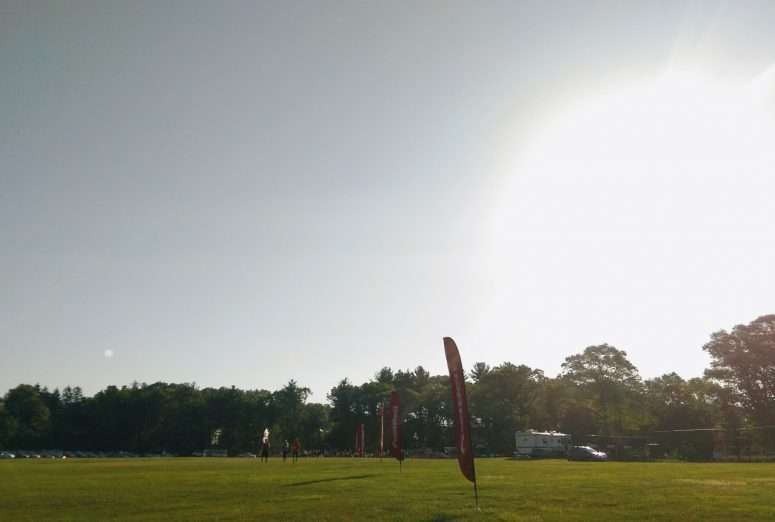 If you survived the trek to transition, you were rewarded with a challenging little bike course. While there were only two decent hills (one repeated twice) on the two loop course, there was very little time to recover on any flats. It was constant up or down. Mostly very scenic up and down, but after a certain amount of miles not view of crosshatched farmland will lift the spirits.

Also worth noting, after the initial section that took you out to the loop (once for the sprint, twice for the Olympic), the pavement was pretty good for the Northeast and the street sweeper had been by so the sand and debris was also at a minimum. I’ll take all the help I can get on the bike.

One of the positives of this training block was getting back to more consistent bike training. I had hopes that it would translate to a better bike and stronger run leg combination than in the past. I was a little disappointed in the end result. It could have been the heat. It probably was the heat and the swim effort, but even the power numbers are down 20+ watts from my FTP. Maybe the hills also took a toll.

The last five mile segment was a grind, so I think the heat was a big culprit. You want to know what else didn’t help? Dropping my chain on a big downhill. This is another lesson learned. I should have gotten out on the road more in the weeks leading up to the race. I had my bike in for a tune-up and it’s been having little issues ever since. I should have made sure those gearing issues were totally behind me before race day.

My plan was to get down 2 bottles of electrolytes on the bike and I thought I was doing alright until I felt a cramp in my right calf around mile 15. That spooked me a bit. I managed to get a salt tab down and keep drinking, but it told me the heat was getting to me even if I wasn’t feeling it on the bike.

So, probably dehydrated, maybe cramping with a finicky chain, I crawled up the last hill and coasted down into transition two. Thankfully we didn’t have to do anything nutty like hike our bikes up a trail to get to our running shoes. Just a little off-roading on some grass.

As usual at this point in races, I was happy to be off the bike and trying not to think about the 6 miles I still had to run.

Top half for the bike and again 2nd among my peers, so perhaps not as bad as I thought, on a tough little course where I had to stop for a mechanical.

Prior to the race, I had done two brick workouts (a brick workout is a tri term for a bike followed by a run) on the course and had felt very encouraged. Even with the hilly run course off the bike, I was able to find my legs and put down a good pace.

That is not how the actual race day went however.

By the time, I hit the first hill (about a quarter mile after transition – this course never let up), I knew it was going to be a challenging run. If I could even keep running. I was feeling that bad.

One little tell that I’ve come to learn is that if my left ear starts popping when I’m swallowing, it means my blood pressure is dropping and I’m dehydrated.  My ear drum was doing the jitterbug as I approached the first mile marker. I actually managed to get to the aid station at mile 1 in under 8 minutes. That would be the high point on the run.

But it wasn’t all doom and gloom and there was some lessons to learn. I dragged myself through the next 2 miles, walking the uphills and shuffling along on the downhills and the occasional flats. I hit the nadir at the aid station at mile 3.5. I stopped for a few minutes and drank 3 cups of Gatorade before shuffling off again.

I’m not sure if it was the Gatorade or catching up to someone and starting to chat with him, but I actually started finding my legs in the second half. Maybe it was a combination of both. I actually started getting faster in the closing miles (adjusting for the elevation you can see this in the splits).

If you are going to have a tough day, finishing strong can really help your morale. 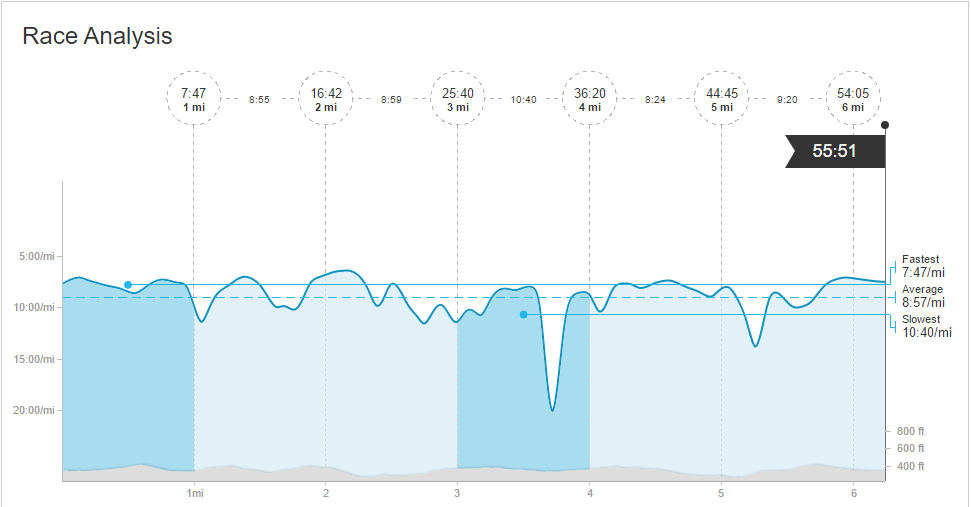 A brutal run, but everyone was suffering out there and proud I didn’t cave and kept going and finished strong.

Despite a tough day and tough conditions, I held on for 2nd in my age group and 27th overall in a time of 2:56:22. Given all the competing factors, I’ll take it.

Overall, the race itself was well-run and offered a very challenging, yet scenic course. If you live in the surrounding area and are looking for an early season low-key sprint or Olympic event with a great swim and rolling hills for the bike and run, this is a great race. It’s almost half the price of the bigger branded events, but doesn’t sacrifice too much in location or execution.

I would say I noticed the low-cost vibe most in the swag and post-race food. There was a t-shirt, but little else in the swag bag and, other than the bananas and watermelon, I steered clear of the food table.

Still, you are there to race and in that regard, the company and the course did it’s job. 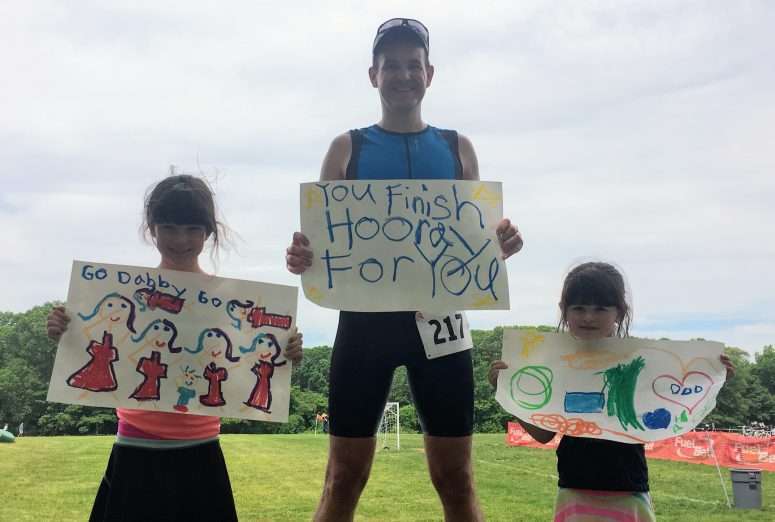