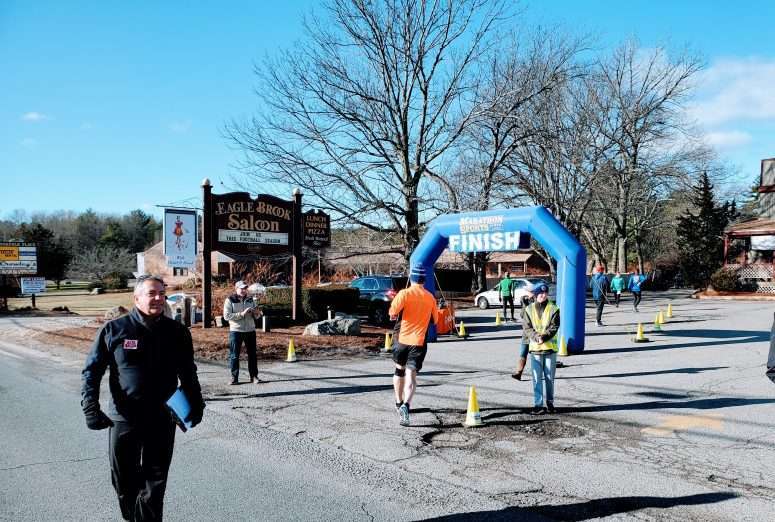 Held at the nearby Eagle Brook Saloon this low key, no-frills (other than the great breakfast buffet and raffle) is quickly becoming a personal tradition and a favorite way to kick off the new year. A field that tops 100 would be a big turnout. This is one of the those small races held in the middle of the New England winter where it might be -30 or 60 and you are quite happy if it’s just 30 above zero.

Everyone that comes out is there because they love running or support the race and it’s Lion’s Club charity. That sense of excitement and generosity comes through in both the runners and the volunteers. Even you show up nursing a little hangover from the prior night, I guarantee you’re more than likely to leave smiling. The power of running!

Registration is inside the Eagle Brook. The typically small field and ample volunteers helps move things along. This year the weather was relatively mild but having a place to wait indoors is never a bad idea.

I registered the day-of (I like to keep my options open when there might be a blizzard) for $35 (it was $30 prior to race day). The lines moved quickly and I soon had my bib and running gloves swag.

Porta-Potty: None. Third race in a row where there were ample indoor facilities to take care of business before the race.

One other random note. On my warm-up jog through the industrial park and connecting neighborhood behind the restaurant, I was nipped by a dog. That’s never actually happened in all my years or running and biking. That got the heart rate elevated. 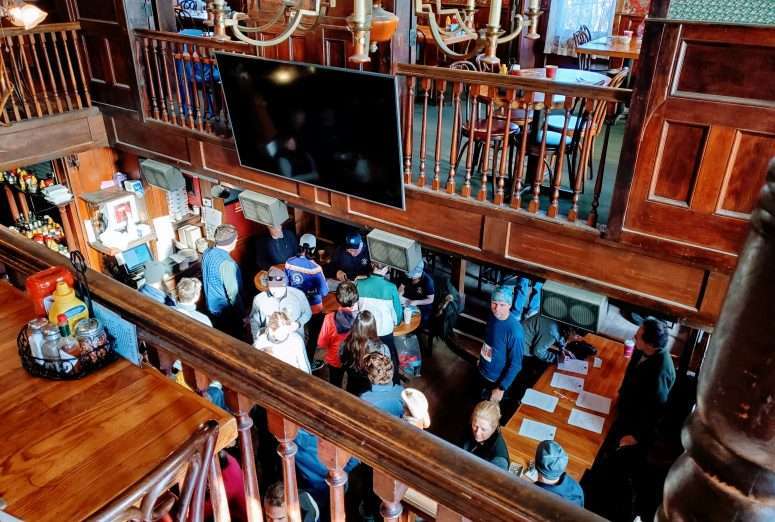 Sometimes this race feels a bit-fly-by night. Mostly in a good way. No chips. No corrals. No closed roads. You sort of come to expect something a little kooky might happen. Gives the race some personality. The roads are open though there are a couple cops and volunteers out on the course.

This is my third year running this and the course hasn’t changed. It starts with a quarter mile downhill to get the legs moving, then you make a right and hit a slow, grinding, low-grade uphill climb.

This month our house has been ravaged by a cold and my knee arthritis has unexpectedly flared up so I went into this race with expectations well in check. My lone goal was to try to finish more strongly than the recent Angel Run where the last half of the race was an agonizing and unenjoyable slog. After the initial jostling off the line, I settled into seventh.

I could see the front pack of four men and knew I would quickly blow up if I even tried to stay with them. Behind the front four was the first woman then a man that looked to be close to my age. I stuck on the back of this strung out group. I could hear footsteps and heavy breathing behind me but didn’t look back. Whoever was back there eventually faded away by the top of the hill.

I had designs on closing in on the woman and man in front of me and while I felt better than the Angel Run, I didn’t have much burst in the last mile. I settled into seventh at the start and it was where I would eventually finish. I closed on the guy in front of me but never really challenged him.

Final time, 21:00 even. Good for 7th overall and 3rd in the age group if you take out the overall winners.

I felt better at the end of this one compared to the Angel Run last month. It was slower than the previous year but faster than two years ago.

Not sure if it was cumulative fatigue, sickness, conditions or just age but I failed to break 20 minutes in any of the annual year end 5k’s. Something to consider for next year. I think I still have some speedy races left but I don’t think I can take them for granted. I’m going to need to prep specifically a bit more if I want to keep going fast in the shorter distances.

The post-race buffet and hospitality by the Eagle Brook Saloon continues to be top notch. The free buffet (for runners, additional tickets are $15 for guests) included eggs, quiche, french toast, bacon, and potatoes plus juice and coffee. The bar was also open for beer.

The raffle also continued to be a hit and give out lots of sponsor prizes. A year after winning a bottle of Scotch, I won a bottle of red wine. There are non-alcohol prizes, too!

For the third year in a row I choose to get up (sort of early) and run a 5k on New Year’s Day. That should tell you enough about the race (or enough about me!) These are the type of small, charity-driven, local races that make the running community great.

I had a great time and will be back again next year. What’s not to like? Easy to get to,  plenty of parking, indoor plumbing, good charity, plus breakfast buffet, beer and raffle prizes.

You could do a lot worse logging your first miles of the year or the decade.