I am officially adding a decent pub to burritos and good pizza on the list of things that are difficult to find when moving out to the suburbs. For the last two weeks of these constant slate colored days both of us have been wishing for warm comfort food and dark beer. The kind of place that smells gently of bitters and fry oil with fogged windows that shield you from thinking of what’s outside.

Or, basically nothing we could find within a 20 mile radius of our house.

There are certainly places to drink out in the ‘burbs, but most are faux-authentic chains trying so, so hard or dark paneled Legion halls steeped in the smoke of unfiltered Winstons. Not places you want to bring the kids or kick back and finish the crossword puzzle that the fish and chips came wrapped in. 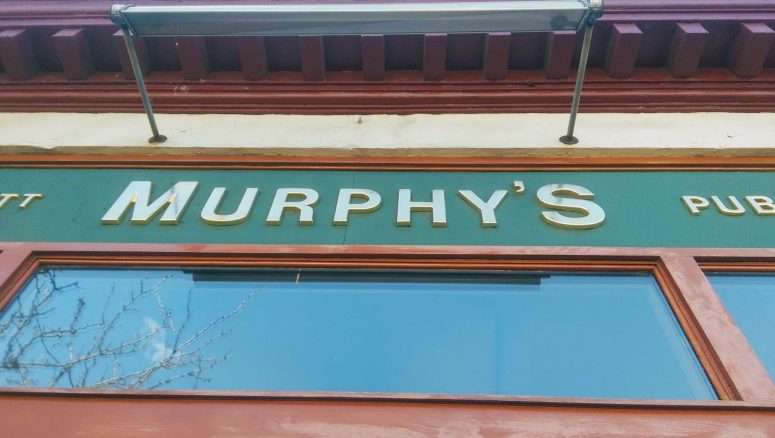 Finally, on Friday while watching yet more rain spill over our gutters, Michelle hit her limit. She declared that on Sunday we’d drive into Boston and celebrate her birthday dinner at our old local, Matt Murphy’s, in Brookline Village.

So what happened? Sunday dawned bright and sunny and by noon, the temperatures topped fifty degrees. Perfect weather to hunker down inside a pub and turn your back on Mother Nature.

We let the monkeys run around outside for three hours until they were sapped of energy and pliable enough to get into the car and later, actually sit (mostly) still at a table in the restaurant. Michelle was able to enjoy her favorite Shepard’s pie, despite the sun being in her eyes. Ally and I enjoyed the fish and chips, despite her insistence that she was eating chicken. And Cecilia just enjoyed getting her root beer in a bottle.

After walking off some of the food, it was back to the house for some cake. Or some mini-cake. Michelle first tried to beg off any baked goods, but I was having none of that nonsense, so we settled on a small dessert. I can’t believe I haven’t discovered this site sooner. It’s really well done and I basically want to make all the recipes.

With some little helpers, I had made the mini-funfetti cake earlier in the day. I did need to order a special 6-inch pan, which I have no doubt I’ll use again after this recipe. I also did receive numerous skeptical looks from Cecilia though it’s getting increasingly hard to tell if they were skeptical or just her normal almost eight year old face. I’m sure I’ll have no doubt about the meaning in a  few more years!

Despite being billed as Dessert for Two, this cake made plenty for four with just enough left to have another piece the night after. But not so much that you are dreading eating it again on the fourth day. I know, in theory, having cake for four or five days straight sounds wonderful, but sometimes the reality……