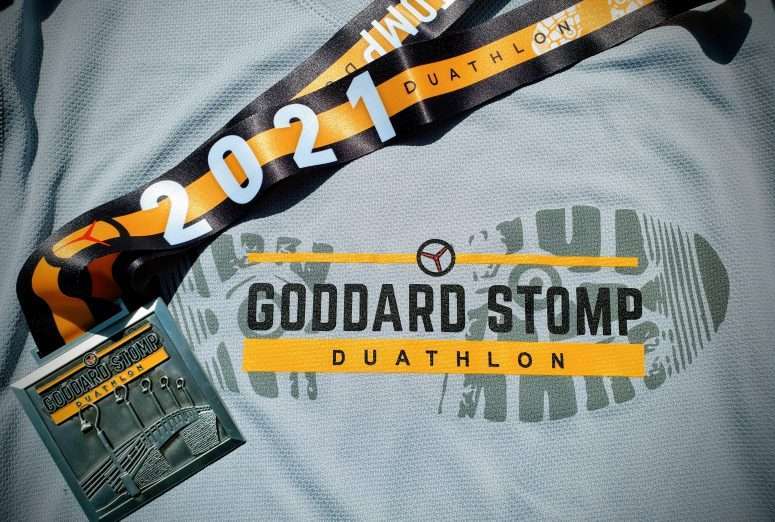 The Goddard Stomp Duathlon put on by the local outfit On Your Left Racing was last weekend in Rhode Island and while none of my training had included bike handling with ski gloves, the event was a fun run-bike-run challenge to start the 2021 season.

The weather didn’t fully cooperate. It was raw and cold, even for April in New England, but by the race start, I think everyone was just relieved it wasn’t still snowing and that we were actually going to be racing outside of our own basements.

For safety protocols, the field was limited in size and the race was divided into two waves. One starting at 7 am and the other starting at 10 am. There were 125 total athletes and they appeared to be roughly divided evenly. It looks like they were divided roughly based on a self-provided expected finishing time with the faster group going off first.

All numbers had to be picked up on Friday at the park, the day before the race between 12 – 6 pm. I’m not sure how strict they were about this as it appeared the registration check-in table was staffed race morning. This would have been a little rough if you lived some distance away and weren’t planning on staying locally.

This was actually my only complaint for the race (other than belly aching about the weather). Not being familiar with the park, they could have used a few more signs directing people to the pickup area. It was not close the primary entrance and I had to drive around a bit before I found it. One or two signs would have made a huge difference.

Swag bag contained a long-sleeve tech tee, the usual coupons and sponsor callouts, plus two milk chocolate bars and two things that I think were wine bottle stoppers which was unique (never gotten that in a race bag before) if a little unusual.

Goddard Park is a large state park in East Greenwich on a point near the water. I’m sure it’s pleasant in the summer but it was wind swept and cold on race morning. But not snowing. It definitely could have been worse.

Parking was not an issue. Lots of lawn to park on and everyone (at least the large majority) seemed to be wearing a mask or buff.

No body marking for the race. So you walked approximately half a mile down a short hill toward the water where transition was set up, went through the usual bike safety check, and were handed an ankle timing chip. Plenty of volunteers were around and things moved along smoothly.

Soon enough it was time to line-up for the first 5k leg. Again, for safety protocols, they were using a time trial start, sending three athletes off the line every 30 seconds. It was self-seeding. The lack of body marking and the time trial start did make it a little difficult to really race against other people but, for me, it was a small price to pay to be actually racing again.

Porta-Potty Report
Actually, this would be my other complaint but it’s not fault of the race organizers who probably didn’t foresee a vicious snow/rain storm the day before but the porta-potty placement ended up being smack in the middle of a mud lake and proved challenging for participants to use without soaking their feet which was the last thing we wanted in those temperatures.

Each run leg would be on the same course, a flat loop on the paved road through the park with one water stop at approximately the half way point.

Having never done a run-bike-run duathlon, my biggest question going into the race was pacing. I knew I’d be feeling good and fresh, the adrenaline pumping at an actual race, for the first 5k. I knew that would be dangerous and I’d need to hold something back. Ultimately, based on some Zwift dualthlon training, I thought I could do both 5k’s around 20-21 minutes and still have a strong bike leg.

I ended up chatting with another guy pretty much through the entire distance. I was a little worried my talking and questions would be annoying but he kept responding and seemed happy enough to run with me. Or he was just too polite. We ended up running side-by-side to T1, finishing with a 20:19.

If you had told me before that I would average 268W for the 25 miles, I would have been very happy. Funny, how perception can mess with your head.

I took a little extra time in T1 to make sure I had on the gear I wanted to stay warm on the bike. After the 5k, I eschewed the heavier jacket but did put on double gloves.

The bike course quickly left the park for the surrounding mostly residential roads. It was two 12-ish mile laps. There was one minor hill but I’d call the rest gently rolling. Varied enough terrian to use a few gears and keep things interesting but no leg snappers that had me spinning furiously in the small ring to make it to the top.

While the roads weren’t closed, the traffic was light at that time of the morning. I wonder if it picked up for the second wave.

There were plenty of volunteers and signage on the bike course. I never had a question about where I was going.

Despite riding pretty consistently for 18 months, I felt like I was mostly going backward despite pushing pretty hard. Still lots of work to do on muscle endurance for rides over an hour.

The second lap was definitely slower as the cold temperatures started affecting me or my worries about pacing had me neglecting nutrition. I did get down one gel and most of one bottle on the bike.

I couldn’t feel my hands or feet in T2 which made getting the helmet off a bit of a challenge to say nothing of just trusting that my feet were making contact with the ground as I ran up the small hill (not feeling so small now) for the start of the second 5k.

My feet were thawing out around 1k, just in time for me to feel some alarmingly sharp pains in both quads. I scrambled to pop some salt tabs and my meds in my mouth but I knew it was likely too late. I was reduced to walking through the water stop and taking my last gel and then walk/run/hobble as best I could to the finish.

It was a tough finish but a really fun event. It was well organized and the volunteers were great throughout.

There were massages available after along with a hot breakfast bag that included a veggie burrito, scone, muffin, banana and water.

For protocols we were encourage not to hang around and given the temperatures this wasn’t a hard sell.

Still, I’ll be back next year and trying to get under 2 hours. This is a great benchmark race to start the year and check triathlon fitness.