All I wanted was a fast training day. Putting in all the zone 2 work and bike drills had left me feeling slow on my runs. I was a can of soda left out in the sun and turned flat. With a few weeks before the Jamestown Half Marathon, I was looking for a local race that wouldn’t disrupt our weekend schedule and where I could go fast, or at least try to. Some athletes can self-motivate and find that speed in daily workouts, for me, I just need the racing environment and the competitiveness to really hit that top gear.

So I poked around online for a nearby 10k and came up completely empty. Remember, this is late June and I think most race directors were holding out for the Fourth of July holiday. With some reluctance I picked a debut charity 5 miler just a town over. I generally shy away from first-year races both for basic logistical reasons (let them work out the kinks for a few years) and for the competitive field. In my experience, it’s rare for a small race to attract a large and diverse field until they’ve been around for a few years. Still, the pickings were slim and it was so close, so I signed up.

Pulling into the lot a half hour prior to the race, those concerns were not eased. There were scattered cars in the large high school parking lot and a small tent off in one corner. It had the feel of a loosely organized running club meetup and not a road race. Now, I do feel a bit bad criticizing a charity event and let me stress that all the volunteers were very friendly and full of enthusiasm, but the lack of experience showed. I registered and pushed any concerns to the side, this was just a motivational training day, not an A or even B race. I’d take what I could from it and let the rest go. I jogged over to the nearby track and began my warmup. Ironically, given what was to come, I had read a series of articles that week about the science and mechanics of proper pre-race warmups and was eager to put it to practice.

As race time approach, I meandered back over toward the tent with the fifty or so other people. The confusion quickly ramped up. They were apparently going to stage a rather impromptu 5k along with the five miler and start it in a different spot but all use the same timer. Those seven or so people disappeared behind the school. We were told to vaguely go over to the front of the school and wait for the director (who just led the 5k people off into the woods) to show up. It went downhill from there. After an almost fifteen minute delay, the director showed up and then told us that to hit the 5 mile point we’d have to zig zag around the parking lot before heading out onto the road. He waved his arm around the parking lot. Um, ok.  A few seconds later, he said go and all hell broke loose. There was a group that looked like it comprised some of the high school cross-country or track team up front that rabbited to the front and as we all thundered toward the the 12 year old volunteer who was supposed to point us in the correct zig or zag, it became clear the volunteers were not entirely clear themselves whether it was a zig or zag. Next, proceeded something I’ve never seen before in an organized race: people started going every which way. 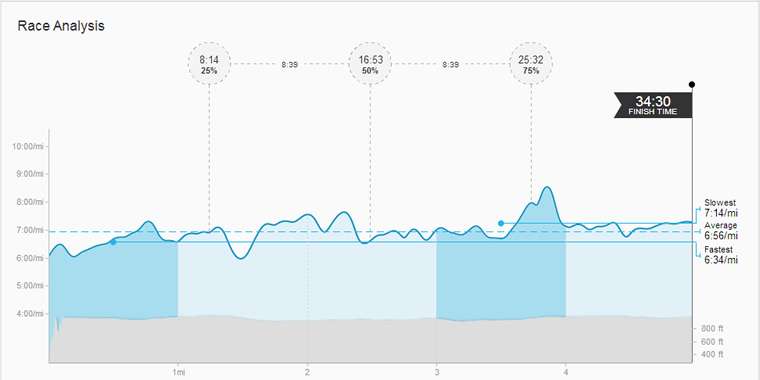 I’m not sure anyone ran the correct route. Eventually everyone did their own zig zag route and headed out onto the surrounding roads. From this point, the route became clearer, but my problems were just beginning. About a mile into the race, I felt a tightness start to creep into my left hamstring. There was no one step or acceleration, just a gradual tightening. It was very acute as if someone stuck a key into my muscle and just started twisting the fibers into a knot. I eased back and tried to just jog it out. No go. It eventually stopped getting worse, but it didn’t get better. The smart play would have been to stop and walk back but at this point I was about halfway through the race and was already annoyed after the start and just wanted to get it done, get in my car and get home. I kept running, or more accurately quickly limping along. I did manage a rather consistently quick limp until we hit the hill toward the end. All you need to know about the field size was that despite all this I still finished in the top ten. Sadly, the map below can’t show you the helter skelter start.

Who knows if it was the delay at the start, the new warm-up I tried or completely unrelated, but it put a big damper on my day and seriously put the upcoming half marathon in two weeks in doubt. The race volunteers, to their credit, were very nice. They got a chair and a makeshift bag of ice for me and helped to the car (after I stopped running it really clamped down). Shifting gears on the ride home became a full body movement. Anyone glancing in the car would have thought I was having a seizure.

The next 1o days became about recovery. The first couple days the hamstring felt bad, but in reality it was probably only a grade 1 strain. I had a limp and light bruise, but I could bend my leg and get around alright if I moved slowly. The first 3 days consisted of a lot of icing. I probably did 5-7 15-minute sessions a day. By the third day the limp was almost gone and I ditched the ice in favor of some heat and light stretching. I also did some very, very light spinning on the trainer. I continued with the heat, stretching and spinning, plus one pool session, for the rest of the week. After a week, I gradually re-introduced some light running and umped the intensity on the biking and swimming.

Eventually, I was able to run (rather carefully) in the Jamestown Half, but I was in a constant state of apprehension about the leg the entire time. I’m still not sure what caused it. I suspect it might be that with the more regular training in the last year and the addition of more cycling I have built up a slight imbalance in my quads and hamstrings, plus I remain one of the least flexible people on Earth. Going to continue to try to improve each of these in the coming offseason.