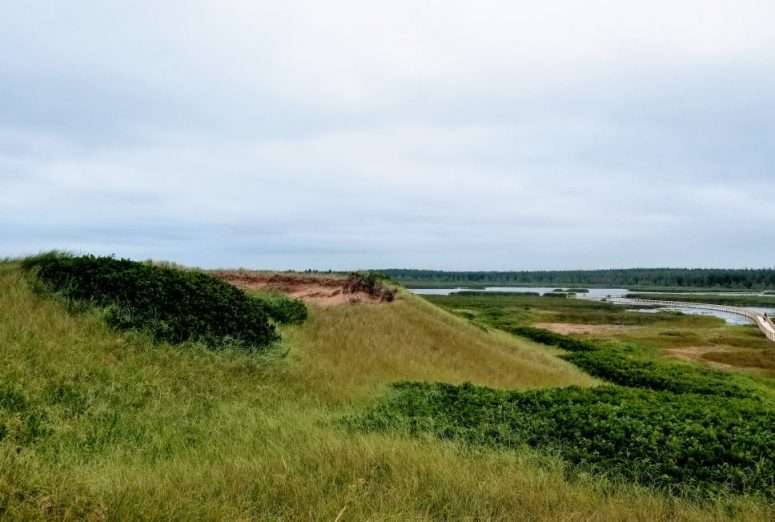 We enjoyed our vacation on Prince Edward Island so much, we’ve been scheming on how quickly we can return. One of the best parts of the trip was the relaxed vibe. You didn’t have to work hard to unplug and just breathe.

There were no big amusement parks. No big resorts. No big expectations. That doesn’t mean there wasn’t anything to do. Quite the opposite. Here are seven things we really enjoyed doing on PEI with kids during our vacation.

If there is one big attraction on the island it’s Anne of Green Gables. L.M. Montgomery’s book series is based on her time on the island. It’s now a national park and it draws a big crowd. There are a few Anne-related sites on the island. If you are going to do just one, I’d recommend the Green Gables location. It’s the most immersive experience with the most things to do, especially for kids. You get the most bang for your buck.

Note, while the grounds are expansive, the house itself if smaller and it can get crowded with tour buses, so I’d recommend getting there early or going late. 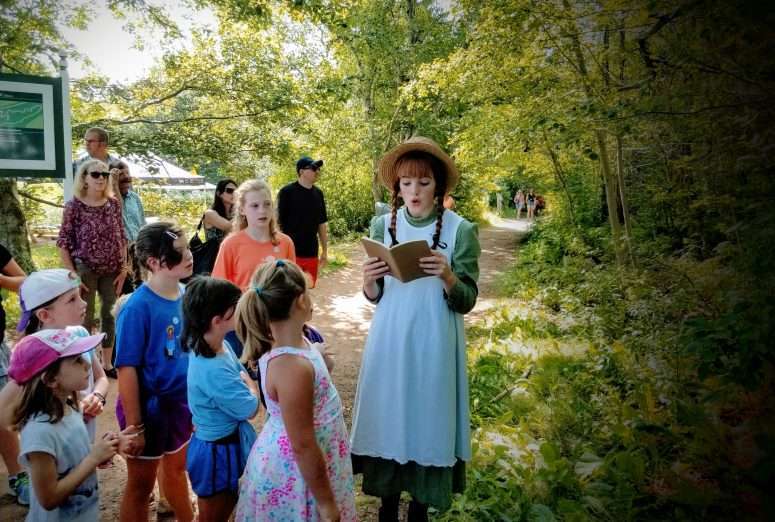 Depending on how much of the surrounding trails you plan to walk, you’ll need 1-3 hours to cover most of the site. We went through the house, took two of the paths (easy walking even for little kids) and did the walk with Anne. The woman who played Anne was really, really good. The girls had a great time.

The only drawback to visiting, for us, was that while we were staying on the eastern side of the island, the Green Gables Heritage site was located in Cavendish, about an hour’s drive from where our rental house was located.

Go to the Anne of Green Gables musical

We continued the Anne part of our trip with a drive into Charlottetown to the Confederation Center to see the musical adaptation of the novel. It now holds the world record for the longest running annual musical theater production. It condenses, but follows the main story lines of the novel. It’s a throwback musical that mirrors the classics of the 50s and 60s (not the jukebox musicals of today). 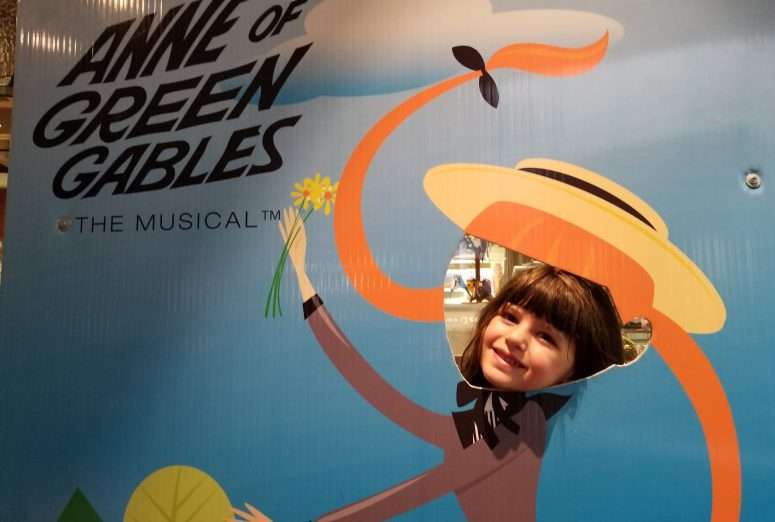 It’s a smaller theater with good sight lines all around. It moves along quickly with the standout dance number being the ‘Ice Cream’ song at the picnic The girls really enjoyed it and enjoyed picking out the differences between the musical and the book/mini-series.

The matinee performance of the musical left us with some time to explore Charlottetown before and after the show. Charlottetown is the capital and largest city in the island province. We felt very at home here as it has a very similar vibe to the small New England maritime towns near us with Victorian-era brick houses lining the streets leading to the water.

We enjoyed walking around and poking through the small shops in search of Anne or Canadian-themed souvenirs to bring home. The kids liked getting some of the famed Cow’s Creamery ice cream. I especially like the abundance (at least 3 that I spotted) of used book shops to browse. There were plenty of kid-friendly restaurants to chose from for a late lunch or early dinner.

Go to the Beach

I can’t promise the water will be warm, but you will have plenty of options to go and enjoy the sand, surf, and spectacular views no matter where you stay on the island. With hundreds of miles of coastline and a variety of different sand, cliffs, and vistas, you are bound to find at least one spot that suits you. More likely you’ll find more than one. 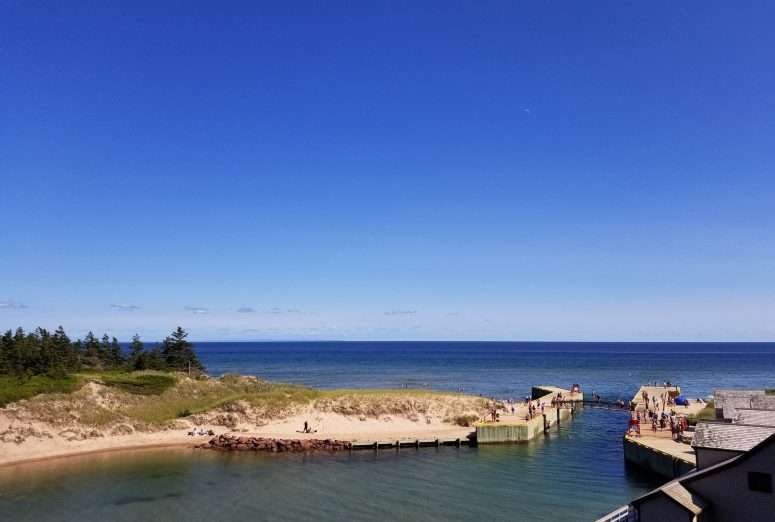 Looking for that famous singing sand? Check out Basin Head. Want to try clam digging? Check out one of the south shore beaches. Prefer lots of company? Then stop by Cavendish or Brackley Beach. Need a campsite at the beach? Choose one of the beaches in a provincial park.

We had a great time at Basin Head and if you stay on the eastern side of the island, highly recommend it. Even if you aren’t close, it’s definitely worth the drive for a day trip.

Go to a National or Provincial park

PEI has 23 Provincial Parks, each with its own unique landscape, features, and natural wonders. Some of the Provincial Parks include campgrounds, where you can spend the night. Many include access to some of the island’s best beaches, but also offer up the opportunity to try other island activities like clamming, hiking, or packing a picnic, or visiting some of the park’s heritage museums. 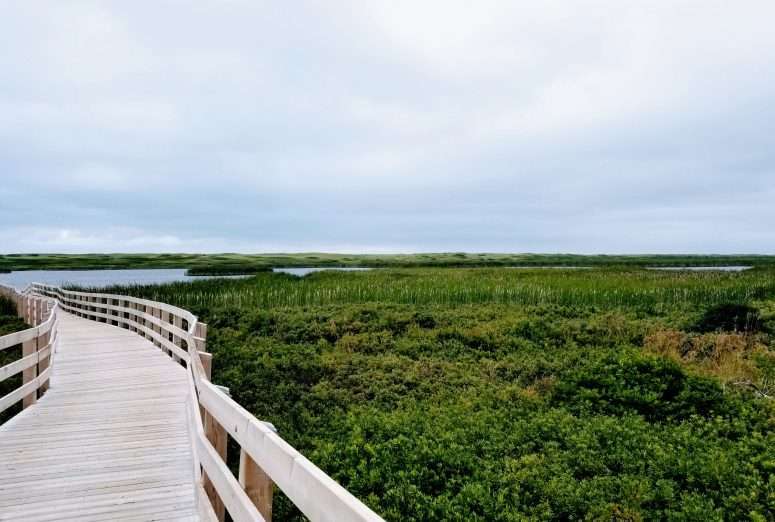 We took the girls to the National Park in Greenwich to see the parabolic dunes and the floating boardwalk. An easy 5k hike brings you down from the parking lot, across the floating boardwalk, over the dunes to the beach. I imagine it could get crowded, but we went on a breezy, overcast day and had large parts of the trail to ourselves. The floating boardwalk and the view from the dunes were worth the hike. The site includes a small museum and they gave the girls little workbooks for the hike to try to spot different trees, flowers, or animals.

Go to an island for vacation and spend so much time surrounded by water and you’re bound to get the itch to go fishing, or at least get out on the water in a boat. Again, no matter where you stay, you are likely going to be near at least a small harbor and find plenty of options to see PEI by boat.

We opted to drive the short distance up to Souris and combine a boat trip, with both some fishing and clamming. It was a great time and a great way to pack a lot of unique experiences into a short time. We were always in sight of shore, so we had no issues with motion sickness and the crew did a great job making sure the kids were safe and having fun with all the activities. 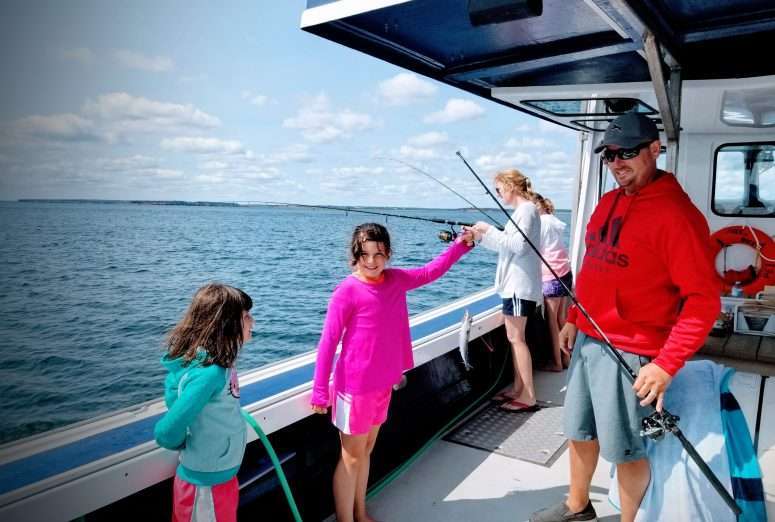 We did try clamming ourselves on the beach near our rental, but had little success. Better to get (or bring along) the right equipment and find out a good spot from the locals rather than spend a frustrating hour with a garden rake at low tide.

We did not go deep sea fishing with the kids, but the bigger harbors offer many tours and options if serious casting is something you want to do while on the island.

Go to a Ceilidh

Finally, something unique to the island and it’s history: the ceilidh (pronounced kay-lee). Ceilidh is a Celtic word meaning musical gathering. Think of this as an informal community, back porch gathering with fiddles, singing, and dancing.

Typically held on the weekends, ceilidhs can be found all over the island, can be big or small, more formal or less, professional or amateur musicians. Some charge a door fee, others do not. If you’re interested in experiencing this unique island event, it’s best to ask a local as they’ll likely know of one nearby.

The best part about visiting PEI is that you can just hang out and do nothing and have one of the best and most relaxing vacations of your life. But that doesn’t mean the island is boring. You can certainly find more than enough to do to fill up a week’s itinerary for both kids or adults alike. I didn’t even mention the golfing, scenic drives, biking, or dining. We did quite a few things, but there’s still so much more to discover on our next trip!