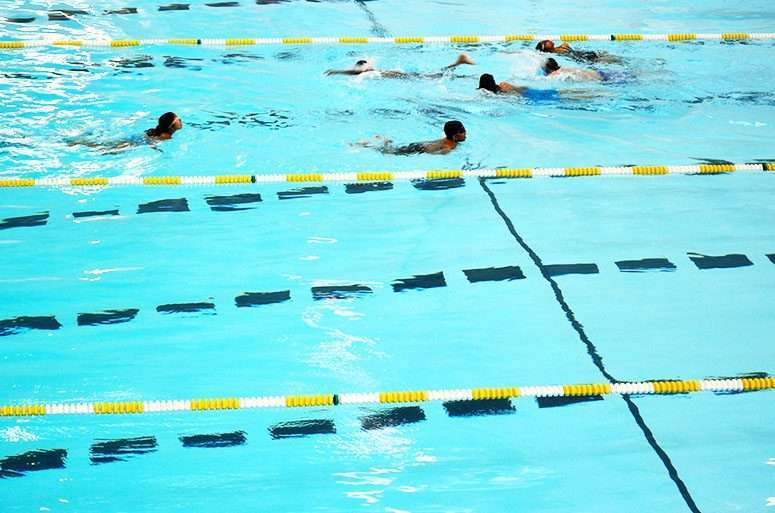 In conversations with other athletes or just people around town, the swim is by far the biggest thing detering more people from giving triathlon a try. Which is a shame, as one, most people my age learned to swim as a child and could easily pick it up again and two, it’s the shortest and generally least stressful part of the race.

If you want to worry about something, worry about the bike, another thing most of us learned as children, but is typically the part that takes the longest and takes the most energy. It’s also where beginners can probably make the most improvements given how long you are typically stuck on a bike during a race.

But back to swimming. I was one of those water-orphaned adults. I took YMCA swim lessons as long as they would let me as a kid and promptly didn’t get properly back in the pool to swim a lap for twenty years until I decided triathlon might be worth a try.

After a couple years, a number of races and countless laps behind me, here are the five things that helped me most:

Get a coach or take a couple lessons
Unlike running or biking, swimming is very technical and just getting out there and swimming laps won’t really help, in fact, it can easily compound bad form or cement bad habits or simply frustrate you into throwing your goggles across six lanes and storming out. Swimming is all about efficiency and reducing drag which means technique is important. I’d recommend a few sessions with a certified coach to jump start your swim technique. It can save you countless hours of bad laps or inefficient form. If you want to swim faster, or just better, technique will trump power and fitness every time. A coach will help you swim smarter, hot harder.

Breathing out underwater
This was by far my single biggest mistake. And silliest one in retrospect. I don’t run and try to hold my breath, so why was I swimming that way? It was leaving me, a reasonably fit person, gasping and clinging to the wall after fifty yards. Turns out breathing out, bubbling, in swimming parlance, in between breaths, is a key component of competent swimming. Who knew? Well, the coach did after watching me go one length of the pool. Problem solved. I still sometimes catch myself holding me breath when I’m thinking about other parts of the stroke, but feeling that lactic acid start to build quickly reminds me to keep breathing.

More streamlined in the water
Remember all that talk about efficiency and reducing drag in the water from above? As a taller athlete, keeping my hips and legs from sinking is something I continually have to check in on while I’m swimming. Body position is a huge factor in having an effective and efficient stroke. Don’t try to swim over or on top of the water, but swim through the water and allow your body’s natural buoyancy to support you. That probably sounds a little nebuolous, but if you know you are breathing correctly and still find yourself easily exhausted in the pool, you are probably trying to swim on top of the water. The simplest fixes for me to keep my legs and hips up are to keep my eyes straight down, not ahead, and make sure I breath to the side without picking up my head. In short, if your head comes up, your back half drops which throws off your body position and adds lots of drag.

Bilateral breathing
It’s going to be easier to breath to one side rather the other. Don’t give in. From the start, focus on breathing to both sides. For the first year, I breathed to only one side and eventually developed a muscle imbalance. You know what suck? Muscle imbalances. I ended up in physical therapy with pain from my neck to my ankles. Don’t mess with your neck or back, just breath the both sides. It gets easier with practice. Plus, it also comes in handy during racing if you’ve got the sun on one side or a particularly aggressive swimmer on one side, you are limited to being blinded or splashed just becuase that is the side you breathe one.

Watch videos
Sort of a cousin to visualization. I’ve found watching swimming competitions on YouTube to actually be very helpful. If you want a good stroke, watch a good stroke.

Bonus: For the love of God, don’t swim in board shorts or swim trunks. Swimming is hard enough without a parachute inflating behind you! Get some jammers or a Speedo and get in the pool.