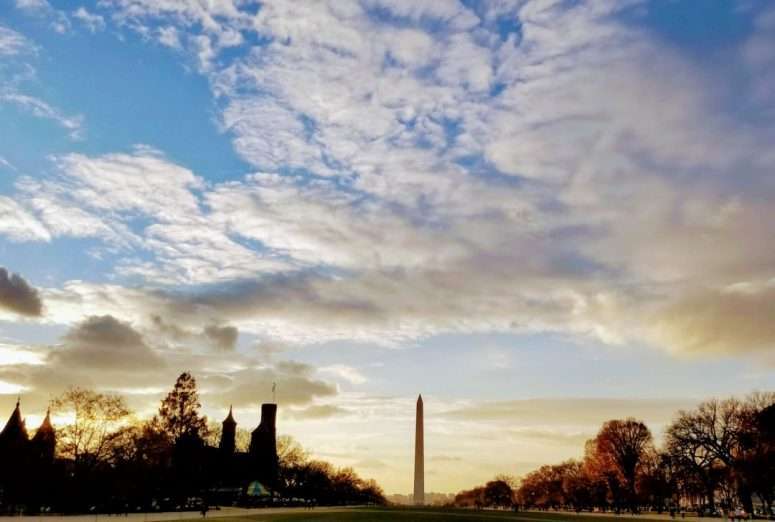 Like most things in my life recently, I blame most of this adventure on Wicked. While the girls were watching the 15th anniversary show on television, someone (Idina?) said on camera that the original Elphaba dress was now at the Smithsonian.

Now, every other year we travel down to D.C. to visit family for the Thanksgiving holiday. Hmmm. The girls are getting older, why not go a day early and hit up some museums. We’ll use Elphaba’s dress as the lure. We played up the dress, the ruby slippers, and the monuments to get the girls excited. It all worked like a charm. Right up until we got the information desk and we were told, yeah, that thing on TV? Not quite true. 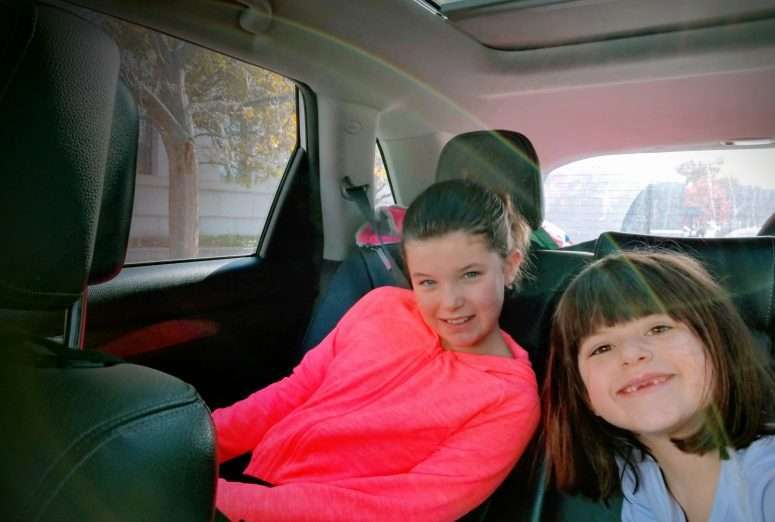 One thing we couldn’t avoid was the drive. On Monday, we picked up the girls from school and started the drive down to Philly where we’d pit stop for the night. The girls are mostly used to this drive to see family, but it’s still a long time and they were up late. This would come into play the next day. 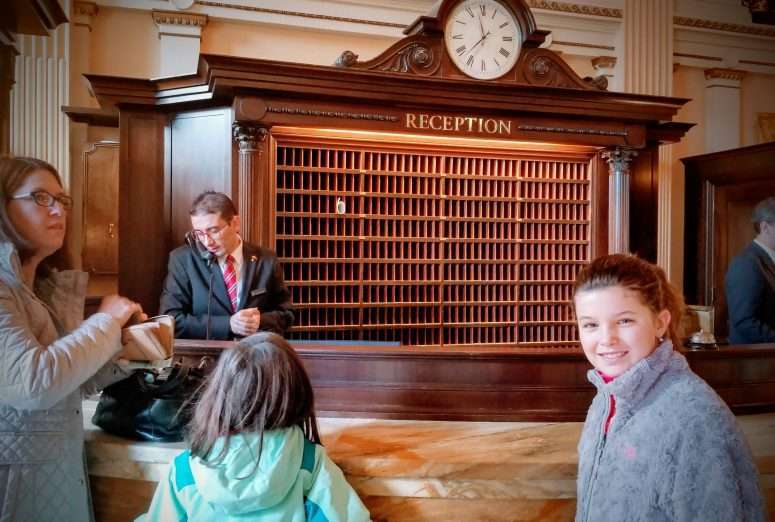 I’m not sure if it was the slow holiday time or we just got lucky, but we got a great last minute rate on a room at the historic Willard Hotel on Pennsylvania Avenue. Just two blocks from the White House and the museums on the National Mall, the location was perfect for us. We could walk to all the major tourist spots. 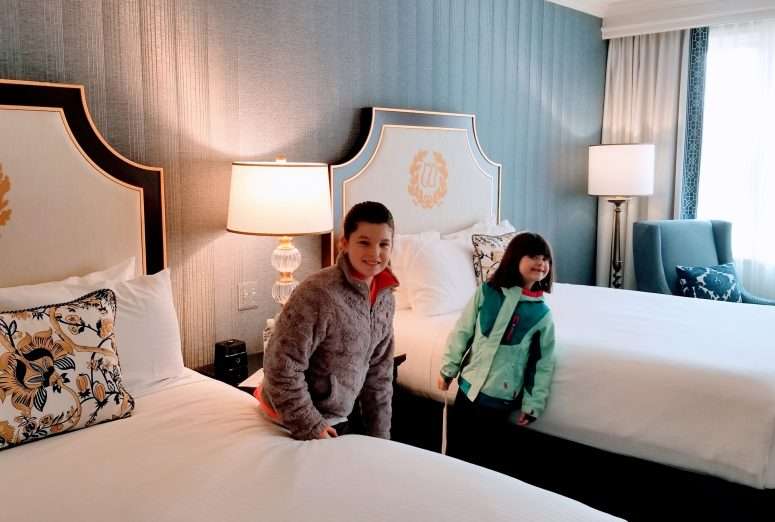 The hotel was elegant but welcoming, especially with the kids. The concierge gave them chocolates (friends for life!) and explained that there was a children’s game and book library where they could check out books and earn “duck” bucks towards a hot chocolate in the hotel cafe. We were off to a good start. 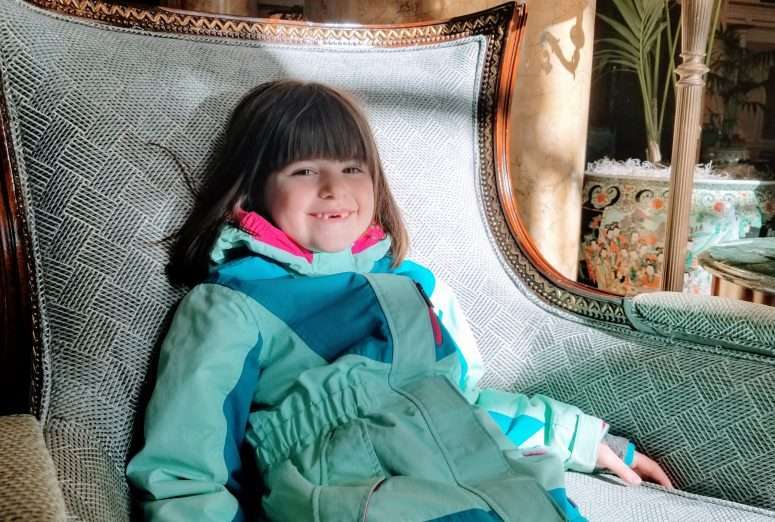 Ally sitting the alcove where Martin Luther King Jr finished his I Have a Dream Speech. We’d explain more and visit his memorial later.

The rooms were also large and clean. Not always a given with a historic hotel where the rooms can be cramped and the furnishings feel old and musty. But our room felt recently renovated. 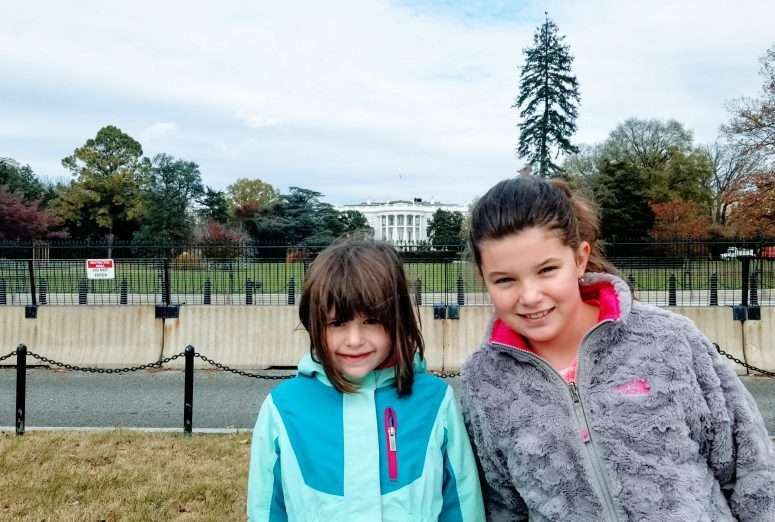 After quickly dropping off our bags we walked up the street and saw the White House. The Willard was actually hosting Peas and Carrots the two turkeys for the White House ceremony, but we’d just missed them walking over. The national Christmas tree was also being prepped and decorated. 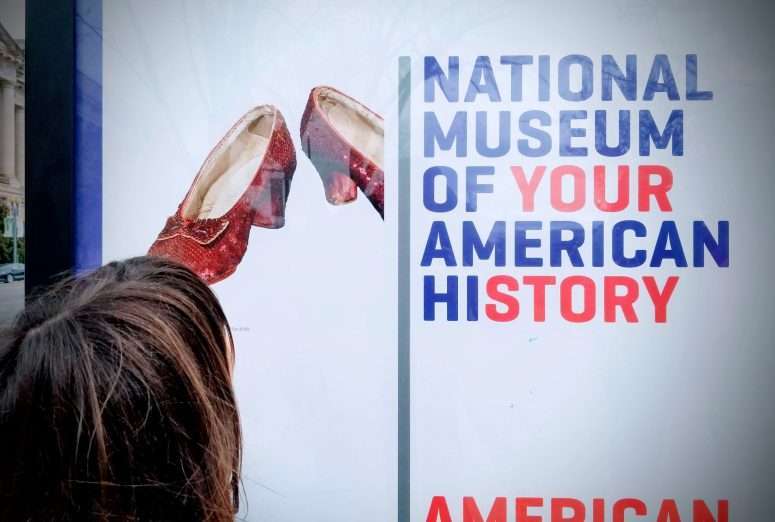 Next we walked a few blocks down the Mall and the American History Museum. It was brisk and windy but still warmer than Boston. 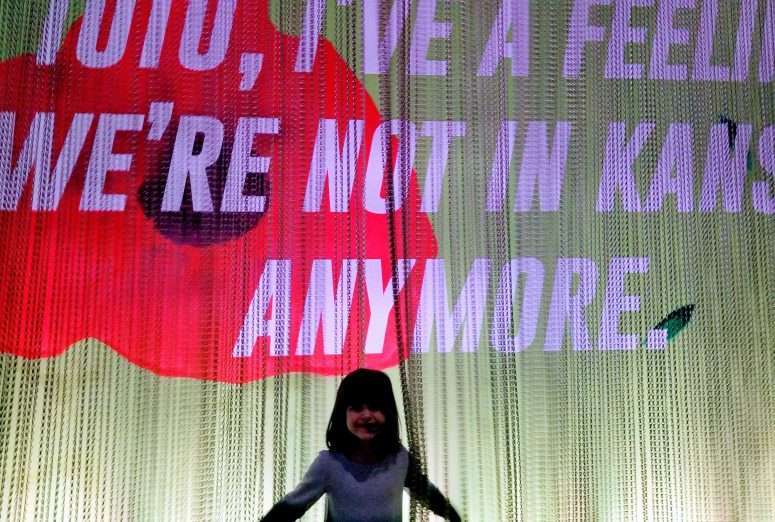 After the disappointing news of the Elphaba dress, we regrouped and found Dorthy’s ruby slippers. 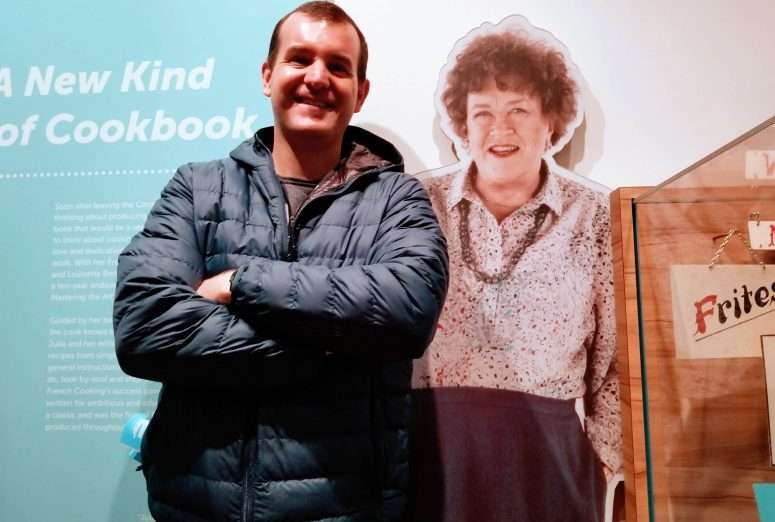 I was also excited for them to see Julia Child’s kitchen, one of my cooking and curiosity idols. They were most impressed that she was as tall as Daddy. 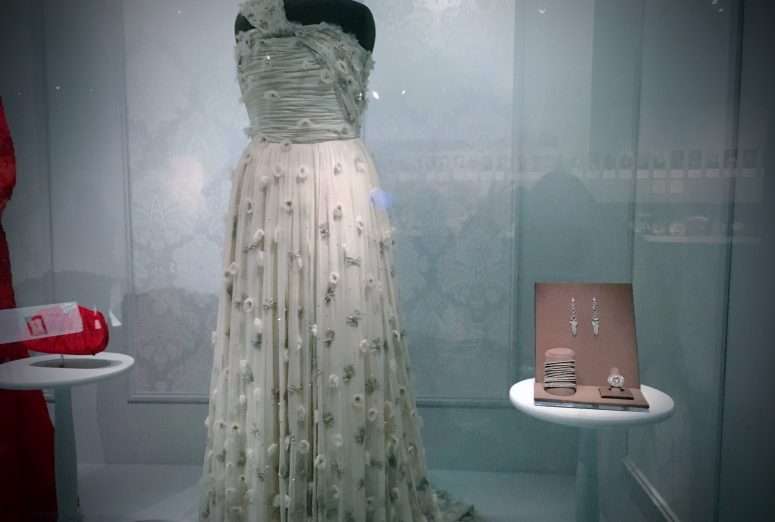 The display of first ladies dresses helped perk the girls up.

After Julia’s kitchen, the ruby slippers and the dresses, the Star Spangled Banner flag (no photos allowed) was an inspiring highlight.

The great thing about the Smithsonian museums with kids is that without admission costs, there is no pressure to stay and try to see everything. When the girls’ attention started to flag, we simply exited and headed for the next museum.

Our one misstep was lunch. I’m not sure if it was the time of year or just normal circumstances, but lunch options on the mall were slim to standard hot dog/pretzel food truck. We ended up spending way too much for lunch in the museum cafeteria. I tried to chalk it up to part of the admission cost. 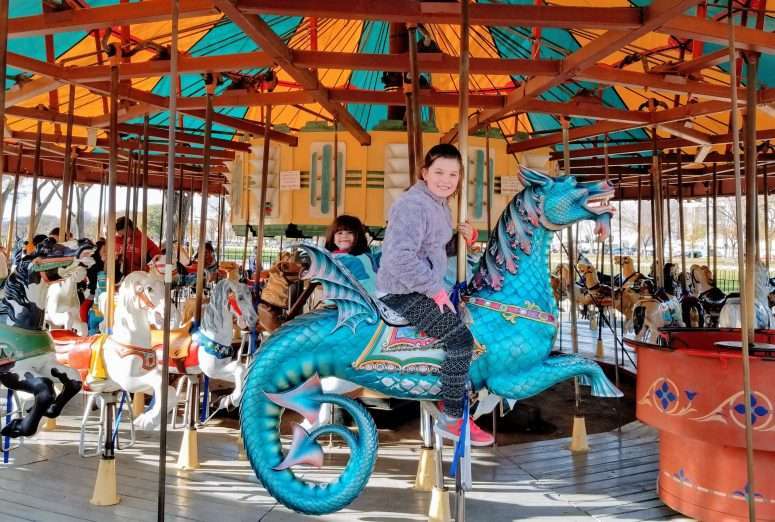 Even with the wind chill it’s hard to get the girls to pass up a carousel. 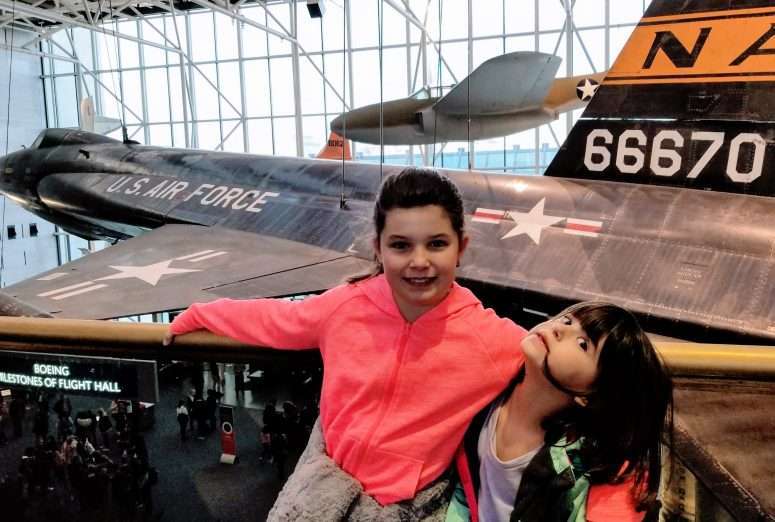 The Air and Space Museum was a lot more crowded. The kids liked the hands on display room, but there wasn’t too much else there to hold their attention. Maybe they were tired, but like the Fields in Chicago, the museum also felt a little dated. 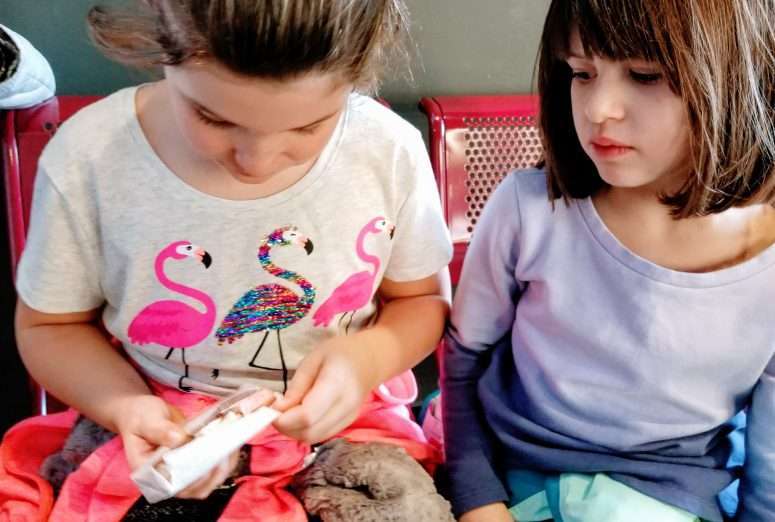 One highlight was the girls’ first taste of astronaut ice cream. Priceless. 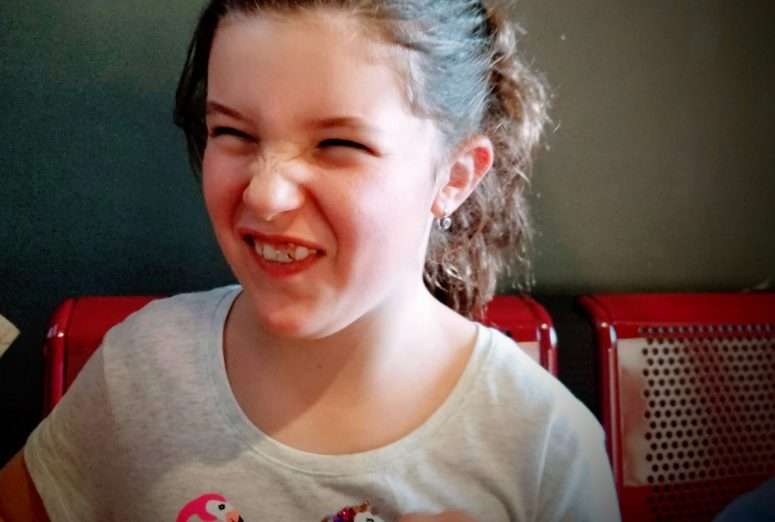 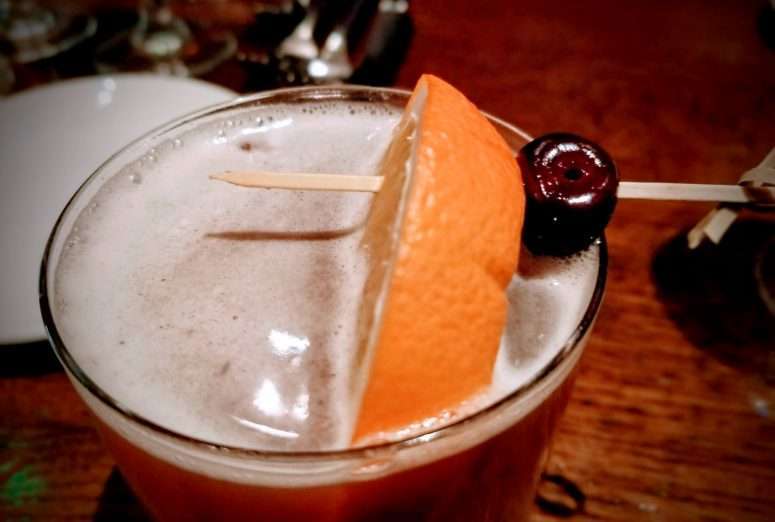 Better to call it a day an hour early than an hour too late. For dinner we opted for a convenience with The Hamilton, which was right next to the hotel. The good thing about going early is that you’re still in time for the happy hour menu. Half price sushi, perfect before all the eating to come the rest of the Thanksgiving week. Plus, a cocktail, of course. 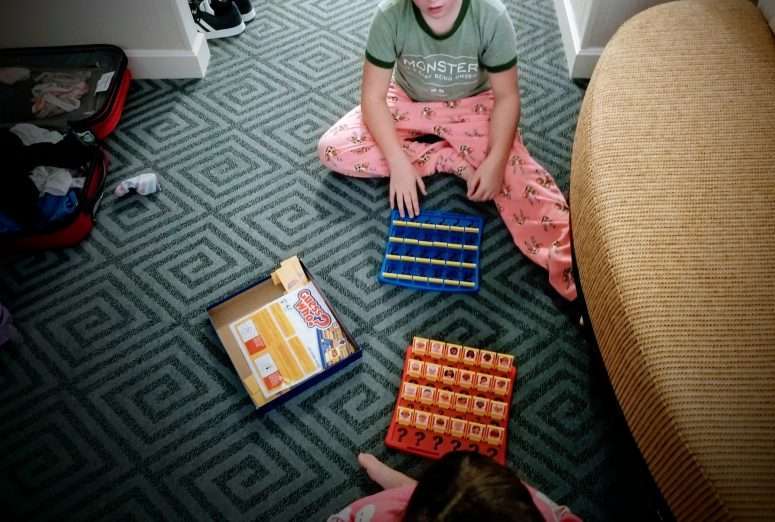 Back at the hotel, the girls took advantage of the kid concierge to get some books and games for the hotel room. 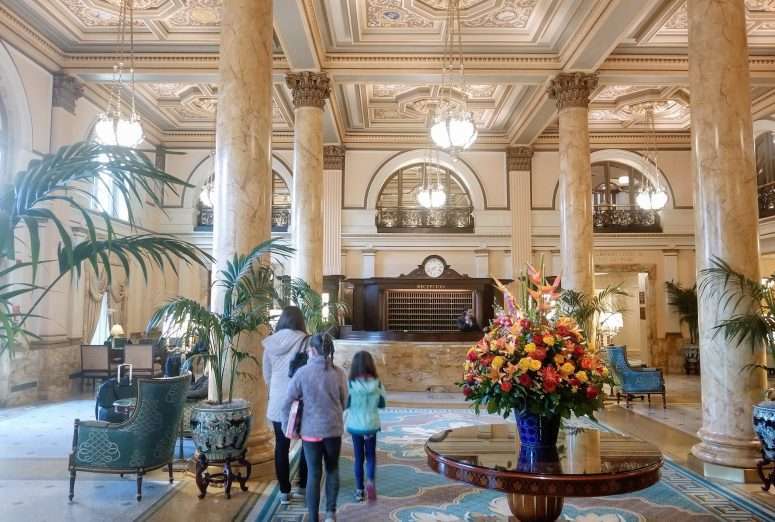 After an early night, we were up and ready to squeeze in a little more sight seeing before heading to relatives to start the holiday. 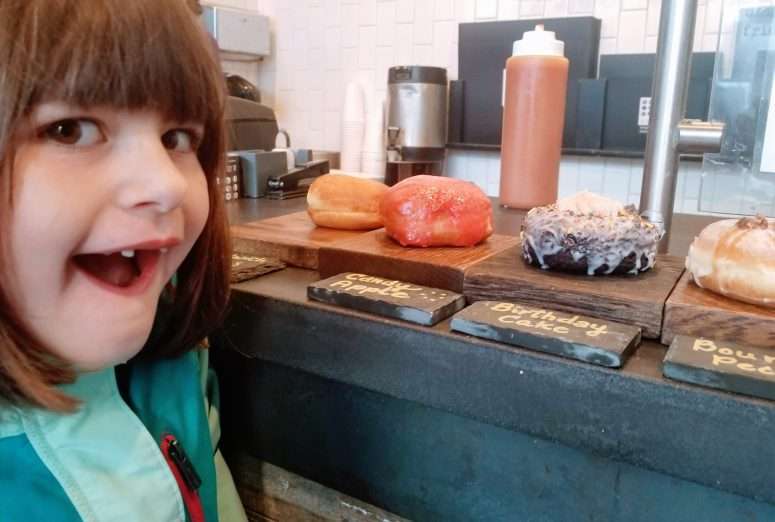 Anytime there is a shop called Astro’s Donuts & Fried Chicken, you need to try it. Bourbon Pecan won out over Birthday Cake as our favorite. 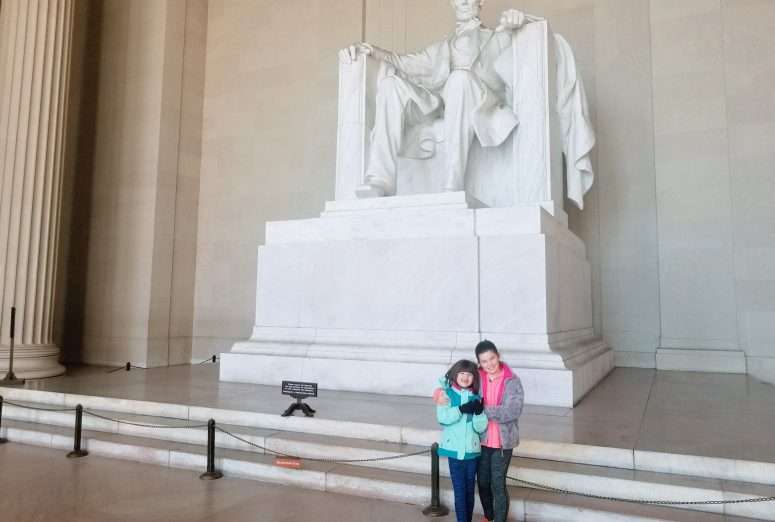 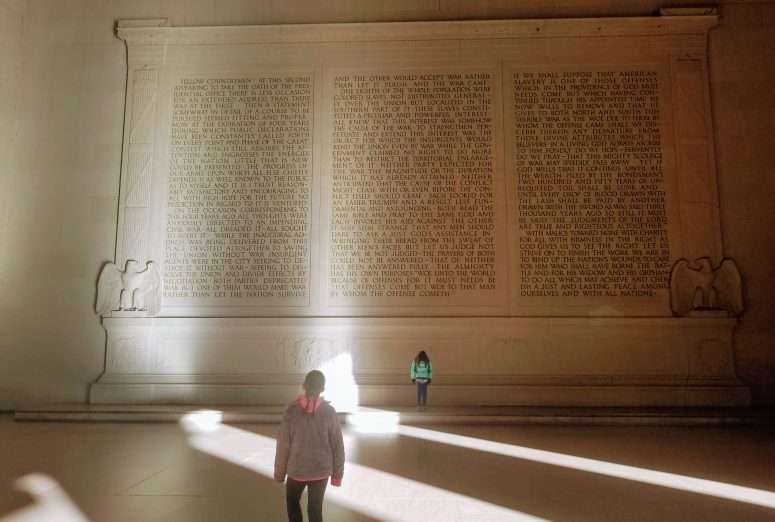 Our fourth grade historian filled us on Washington and Lincoln. She knew quite a bit about slavery and how Lincoln died. 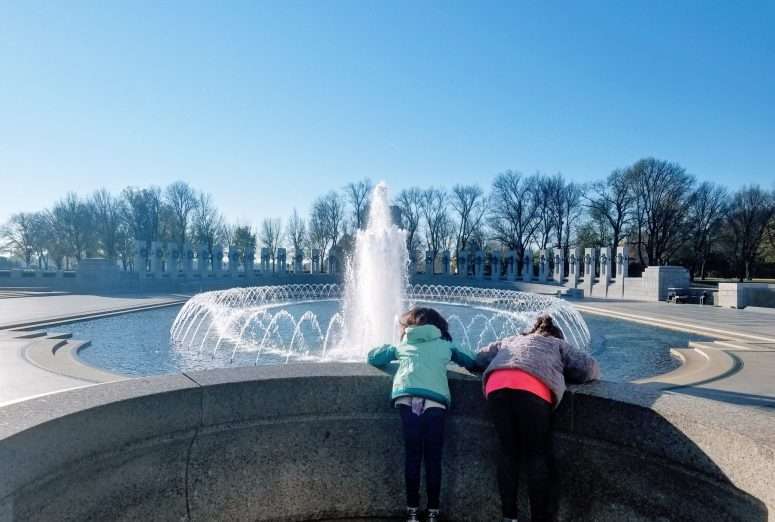 She was more fuzzy on World War II. 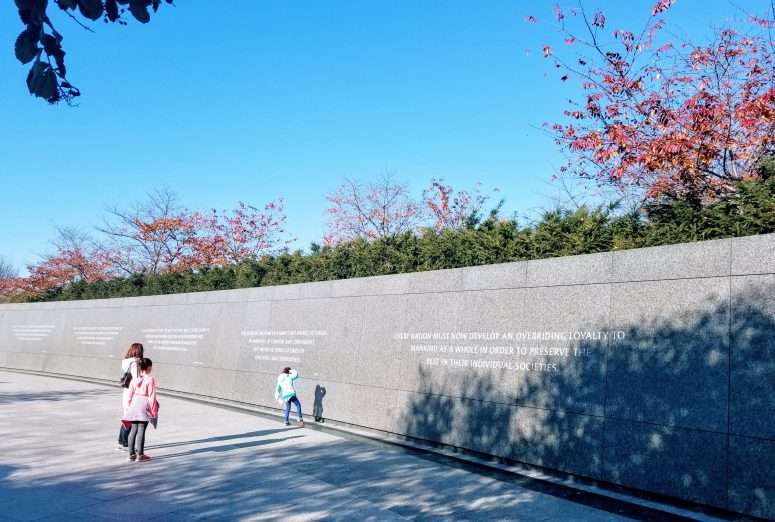 None of us had seen the MLK, Jr. memorial. It’s very well done. 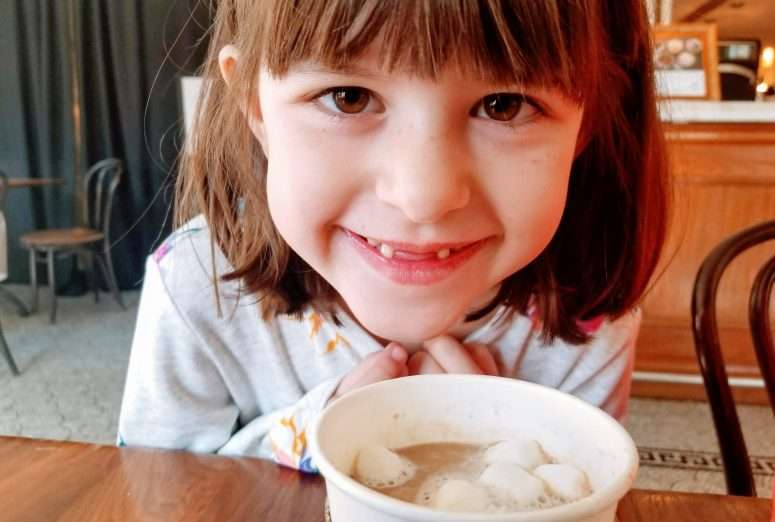 We spent about 2 hours walking around before heading back to the hotel. The girls cashed in their “duck” bucks and warmed up with some hot chocolate from the hotel cafe. No instant packets. This was legit chocolate and cream. There might have been a Dad tax levied. 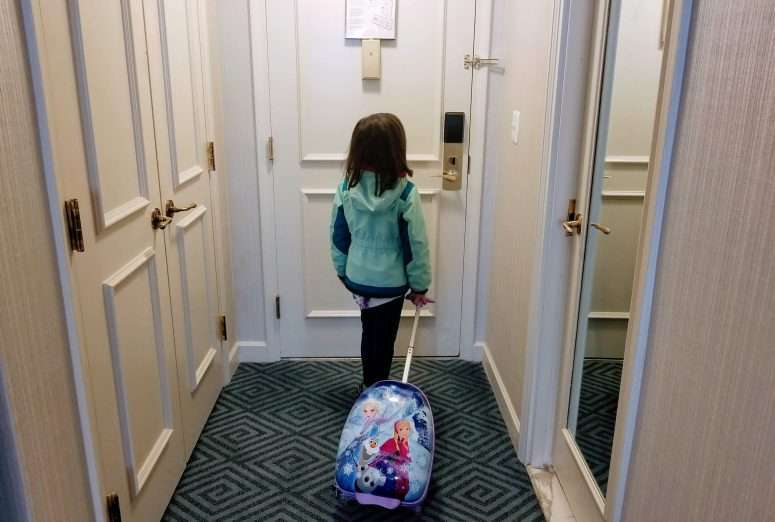 That’s it. With free museums, walkable monuments, and mild weather this side excursion was a great quick addition to our bigger Thanksgiving travels.